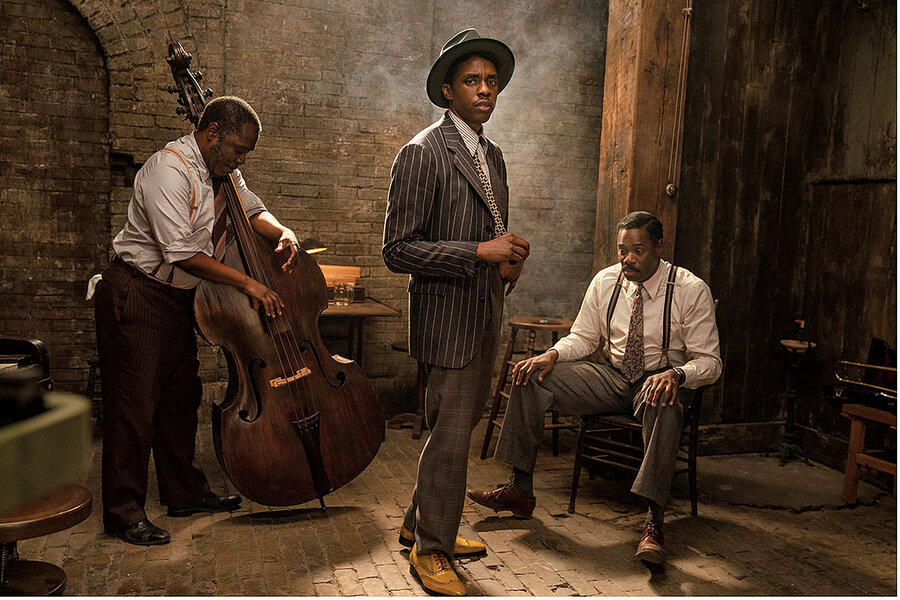 My top pick would be Chadwick Boseman for his furiously powerful performance as Levee, the trumpeter with brash ambitions, in “Ma Rainey’s Black Bottom.” There are so many emotional levels to Levee, from playful to painful, that if you turn away for even a moment, you’ll miss something revelatory. Because this was Boseman’s last film, an unavoidable sadness shrouds his work here, but that feeling is dissipated by the realization that we are watching a marvelous actor giving full measure to a great role. A posthumous Oscar is almost certainly in the offing.

In “The Father,” the Oscar-nominated Anthony Hopkins, in one of the highlights of his extraordinary career, plays an aging patriarch in the throes of dementia. It’s the sort of role that could easily have lent itself to scenery-chewing, but what is so special about his work here is how carefully modulated it is. It’s an exquisitely subtle rendition, and a reminder of how Hopkins, even in the most garish of roles – think Hannibal Lecter – always works from deep inside.

Adarsh Gourav is the propulsive center of “The White Tiger,” playing a tea-stall waiter in India who breaks out of his caste and connives his way to riches by any means necessary. Gourav is a quicksilver performer who so perfectly embodies the young man’s blinding ambition that, at times, I didn’t think I was watching a performance at all. This, of course, is the most difficult kind of acting to pull off.

Lots of terrific work in this category. As the ensemble of blues musicians in “Ma Rainey’s Black Bottom,” Colman Domingo, Michael Potts, and especially Glynn Turman, in the performance of his career, ensure that Boseman’s acting is met at the highest level.

In “Nomadland,” David Strathairn is one of very few trained actors (along with lead Frances McDormand) in the film, and yet he manages to fit into the almost documentary-like landscape without sticking out in the least. It takes immense talent to be this artfully understated in such surroundings.

The best acting in “Sound of Metal” is also its least showy. As a Vietnam vet who oversees a commune for fellow deaf people, Paul Raci delivers a performance so unprepossessingly wise and compassionate that I could have watched an entire movie centered on just him.

LaKeith Stanfield is William O’Neal, the Judas in “Judas and the Black Messiah,” who infiltrated the Black Panthers for the FBI when Fred Hampton, played by Daniel Kaluuya, was its chairman. Stanfield has the less flashy part (both men are Oscar-nominated) but he makes you feel in your bones both the covert thrill and the self-loathing that come from being an informant.

Sacha Baron Cohen can do a lot more than play Borat. In his Oscar-nominated turn as radical political activist Abbie Hoffman in “The Trial of the Chicago 7,” he brings out the passion and the soulfulness that lay just beneath Hoffman’s prankster persona. This is no cartoon caricature.

One of the least-awarded major performances of the year belongs to Nicole Beharie in “Miss Juneteenth.” As the struggling Fort Worth, Texas, single mother and former beauty queen who wishes a better life for her 15-year-old daughter, Beharie, even in her slightest gestures, projects the full weight of this woman’s lifelong persistence and rue.

Another no-show among this year’s Oscar contenders is Kate Winslet, who gives perhaps her finest performance in “Ammonite” (sexually explicit) opposite the always wonderful Saoirse Ronan. Winslet plays the real-life 19th-century paleontologist Mary Anning, whose significant scientific achievements were co-opted by her profession’s male hierarchy. Most actresses would be content playing Anning as hard-bitten. With Winslet, that outer shell is the merest camouflage for an entire galaxy of suppressed feelings.

Viola Davis is the likely favorite to win the Oscar for her stunning work as the swaggering, take-no-prisoners Ma Rainey in “Ma Rainey’s Black Bottom.” It’s one of the most ferocious performances I’ve ever seen, but like Winslet’s very different work in “Ammonite,” it’s far from one-note. Davis shows us the pain and pride fueling the ferocity.

Youn Yuh-jung as Soonja, the grandmother in “Minari,” is, for me, much the best part of that celebrated film. Youn is a revered actress in South Korea and her Oscar-nominated work here should greatly expand the reach of that reverence. Soonja, who travels from her homeland to live with her son’s family in Arkansas, is not your typical movie grandma: She doesn’t bake cookies, swears a lot, and loves watching pro wrestling on TV. She’s a hoot but – and here’s the key to Youn’s artistry – she’s also a fully drawn, richly conceived character.

Ellen Burstyn is one of those performers who can convey more with a look than most actors can with an entire monologue. In “Pieces of a Woman,” where she actually gets to deliver a stunning monologue, Burstyn plays the unyielding, Holocaust survivor mother of an errant daughter (Vanessa Kirby) who is grieving the loss of her child in a home birth. It’s great to see an actress whose career spans more than six decades still at the height of her powers.

Here are a few more unnominated performances to savor: Sidney Flanigan and Talia Ryder in “Never Rarely Sometimes Always,” Fiona Shaw in “Ammonite,” Anya Taylor-Joy in “Emma,” and Dominique Fishback in “Judas and the Black Messiah.”