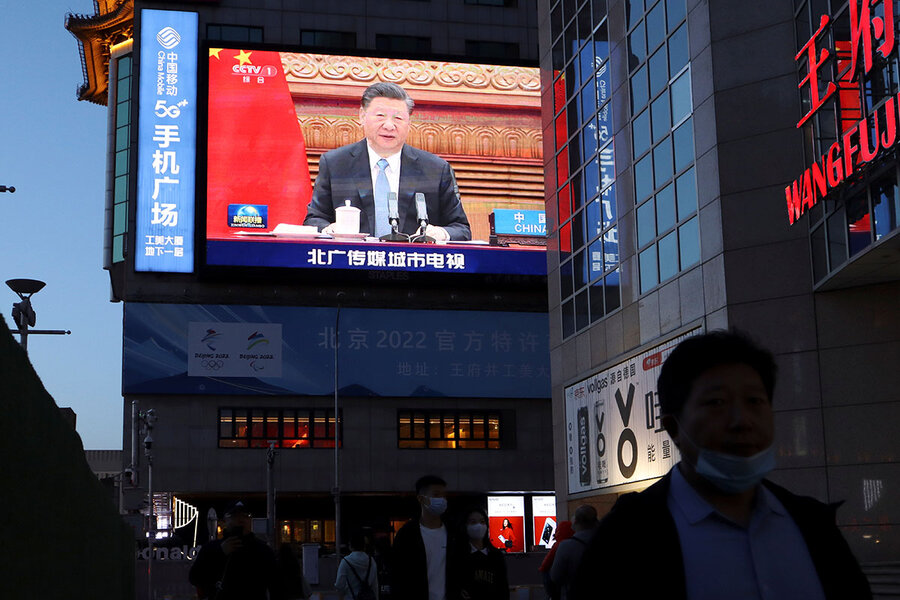 But winning China’s cooperation with the United States on climate-related issues, even as the U.S. pursues an increasingly confrontational relationship on many other geopolitical priorities, is unlikely to come easily, many China experts say.

Moreover, some add, China will almost certainly consider its cooperation on climate as a bargaining chip for U.S. concessions on competition and confrontation, and another C: criticism.

“The Chinese are already doing things on climate change for their own advantages, but it’s a separate thing when it comes to cooperating with the United States,” says Derek Scissors, an expert in U.S.-China relations and Chinese global investment and trade policy at the American Enterprise Institute (AEI) in Washington.

“They’re not going to significantly cooperate with the U.S. on reducing their coal dependence and coal emissions, for example, when at the same time the U.S. is accusing them of grave human rights violations in Xinjiang Province and IP theft,” he adds. “It’s costly for them to cooperate, so they are going to seek to offset those costs with things they want from the U.S. somewhere else.”

In the run-up to the climate summit, the Biden administration has been busy courting China by inviting Chinese leader Xi Jinping and pressing the Chinese to unveil new concrete steps to improve on their existing international commitments.

Indeed, Mr. Xi on Wednesday confirmed his attendance at the virtual summit, with Foreign Ministry spokesman Wang Wenbin saying the Chinese leader’s acceptance reflected the country’s willingness to cooperate with the U.S. on the basis of mutual respect.

On the surface, U.S.-China cooperation on climate might seem to be carrying the day. Last week White House special climate envoy John Kerry had three days of conversations in China, at the conclusion of which the two powers agreed to work together to address what both sides agree is an existential threat.

We “are committed to cooperating with each other and with other countries to tackle the climate crisis, which must be addressed with the seriousness and urgency that it demands,” the world’s two biggest carbon emitters said in a statement issued Saturday.

Moreover, the U.S. and China have already committed to working together in some international arenas. For example, the two powers co-chair the working group on sustainable finance at the G-20 forum of the world’s major economies.

On Monday, Secretary of State Antony Blinken gave a pre-summit speech in which he laid out both the daunting challenges and the significant opportunities – including job creation, innovation, and development of a sustainable and more equitable economy – in addressing the climate crisis.

With his backdrop the Chesapeake Bay – which he called “the crown jewel of the world’s estuaries,” all of which he said face grave threats from climate change – Mr. Blinken said that in reasserting its global climate role, the U.S. would not hesitate to criticize countries that aren’t stepping up.

And he had another warning: “Climate is not a trading card; it is our future.”

Yet as good as that may sound as rhetoric, AEI’s Mr. Scissors says he’s not sure he believes it.

“If the problem of climate change is really, really important to us, as the Biden administration says it is, and if you really think the Chinese need to do more to address this serious global risk, then the U.S. is going to have to put some things on the table,” he says.

Noting that China accounts for almost half of global coal production and continues to add new coal-fired energy plants, Mr. Scissors adds that China knows its action on climate “is worth a lot” to the world, including the U.S. “Anyone who thinks the Chinese are going to trade all that away for free is not dealing in reality,” he says.

Still, there are also experts who note on the other hand that China is the global leader in green technologies – production of solar panels and electric vehicles, for example – and has deep and strengthening ties to the European Union and European countries on climate-related issues like trade.

On the other hand, Mr. Patnaik says President Biden could have a hard time “cooperating” with China and other major carbon emitters while it remains unclear just what U.S. climate policy is or how much cooperation the Biden administration will get from Congress to implement bold climate measures.

“Biden is in a bind. He’s telling the world America is back,” Mr. Patnaik says, “but what does that mean?”

Indeed, others say the U.S. certainly has the potential to play a significant leadership role on the climate issue, including with China – but that it will take getting its own climate house in order to then act from a position of strength.

At the summit Mr. Biden reportedly is planning to announce that the U.S. is setting an ambitious new goal of cutting its emissions almost in half by 2030.

“As the U.S. steps up, it can put more pressure on others such a China and India,” says Amar Bhattacharya, a senior fellow at Brookings’ Center for Sustainable Development. He then foresees a shift in the U.S. approach “to the opportunities” presented by climate action, “including the opportunities for cooperative action.”

Still, even some Chinese experts bluntly present the potential for cooperation with the U.S. on climate in the very “trading card” context Secretary Blinken suggests the U.S. will not accept.

“China maintains an open attitude when it comes to climate cooperation and welcomes dialogue,” Zhang Monan, senior fellow at the U.S.-Europe Institute at the China Center for International Economic Exchanges, said in a Bloomberg interview this week. “However, if countries continue to pressure China or adopt confrontational and non-cooperative tactics,” she added, “then China will address this with corresponding actions.”

AEI’s Mr. Scissors says the Biden administration is consistently using tough rhetoric with China, but by and large has not yet “committed themselves to taking the truly costly actions on China.” And he says China is using the moment to “message” the U.S. that by acting on its hardened rhetoric, it’s going to prompt consequences in other areas of U.S. interest.

“What I see,” he says, “is the Chinese are thinking: ‘Maybe we can push [the U.S.] away from some of the stuff we really don’t like – and then maybe we can be cooperative on climate.’”

Walter Mondale and the legacy of 1984

With trial over, what next for racial justice?