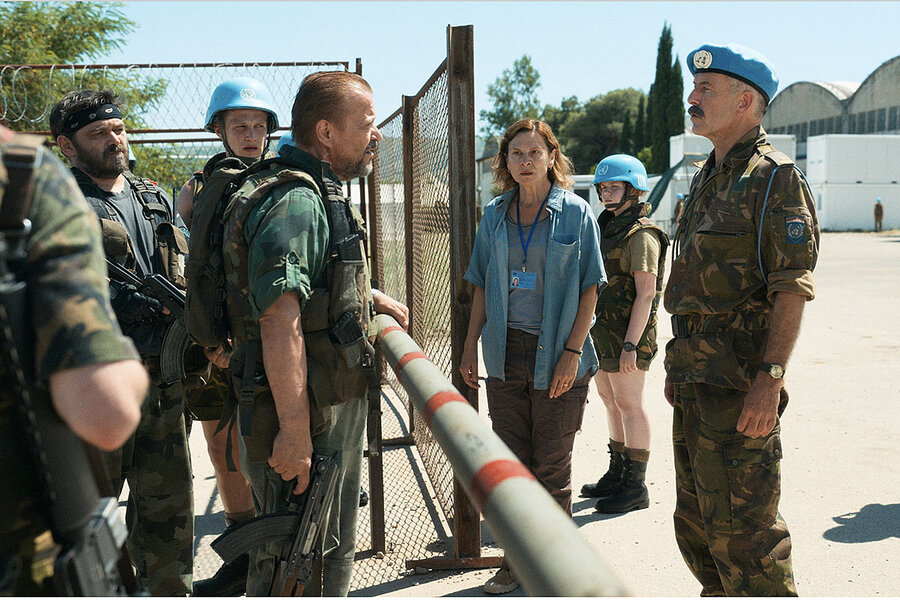 In July 1995, in the enclave of Srebrenica in eastern Bosnia-Herzegovina, over 8,000 Bosnian Muslims were slaughtered by the invading Serbian army in the largest civilian atrocity in Europe since World War II. Because the world then was mainly focused on the fighting in Sarajevo, this genocide did not receive the global outrage it demanded. “Quo Vadis, Aida?,” written and directed by Jasmila Žbanić, is an incendiary memorialization of that desperate time. It is also, by the end, an impassioned call for moving forward. Žbanić, who was living under siege in Sarajevo when the massacre occurred, is dramatizing this human catastrophe so that future generations will not repeat it.

Its main protagonist, Aida (Jasna Ðuričić), is a Srebrenican first grade teacher acting as a translator for United Nations officials who have established a supposedly “safe area” within the enclave. Thousands of civilians, with little access to food or water, have been packed into a fenced-off compound while thousands more outside clamor for entry. Among those outside are Aida’s husband, Nihad (Izudin Bajrović), and their two sons, 17-year-old Sejo (Dino Bajrović) and his older brother, Hamdija (Boris Ler).

As it becomes increasingly clear that the blue-helmeted Dutch U.N. peacekeepers are powerless to stop the Bosnian Serb forces from inciting a slaughter, Aida, amid the maelstrom, frantically tries to save her family. She proffers, as if it were a talisman, her U.N. pass allowing her safe passage through security checkpoints. She recognizes the doom that awaits her sons and husband if, like virtually all of the men, they are rounded up by the Serbian army.

Can a movie keep history from repeating itself? Monitor film critic Peter Rainer says award contender “Quo Vadis, Aida?” succeeds in its mission to get people thinking and talking about the tragedy that occurred in Srebrenica in 1995.

Žbanić’s all-seeing eye for human detail is the main reason “Quo Vadis, Aida?” – a nominee, as of this writing, for the Oscar for international feature film – is much more than just a straightforward political thriller. When, for example, Aida is imploring the occupying soldiers for mercy, one of them recognizes her as his former grade school teacher and seems quite happy to see her.

And yet, nothing good comes of this moment. The soldier, like so many in this tragedy, is just following orders. In another scene, Aida, reunited with her husband inside the compound, rips up and then burns their family photos along with the incriminating journal of the war years he has been keeping. What once was precious is now ashes.

Žbanić mostly keeps the film’s focus on Aida, although the director crosscuts scenes involving the U.N. negotiators and the Serbian forces headed by the imperially self-assured Gen. Ratko Mladić (Boris Isakovic, in one of the truest portrayals of murderous megalomania I’ve ever seen). In its every inflection, Ðuričić’s face registers the horrible wages of this war. Aida knows she has no time to give in to despair. She looks both valiant and aghast.

Žbanić refrains from showing us the worst of the atrocities that actually occurred, and this is probably for the best. Near the end, in a single, motionless camera setup, we see the wives and widows attempting to identify the remains of their families, and the stark simplicity of the tableau is more resonant than any explicit violence could ever be.

Although Serbia has yet to officially call the Srebrenica massacre a genocide, even though it was so ruled in 2007 by the International Court of Justice, it’s clear that Žbanić looks to the children and grandchildren of that generation to fulfill a higher ideal. That’s why her last scene is of a grade school play in which children of mixed ethnicities, their faces framed in a series of beaming close-ups, fill the screen.

She is not naive. Žbanić knows that the perpetrators of the massacre were once children, too. But she has said in interviews that her purpose here is to invite people to come together. In its own fervent and sorrowful way, I think her film succeeds in that improbable mission.

Peter Rainer is the Monitor’s film critic. “Quo Vadis, Aida?” has English subtitles. It is available on streaming platforms including Amazon Prime Video, iTunes, and Hulu.