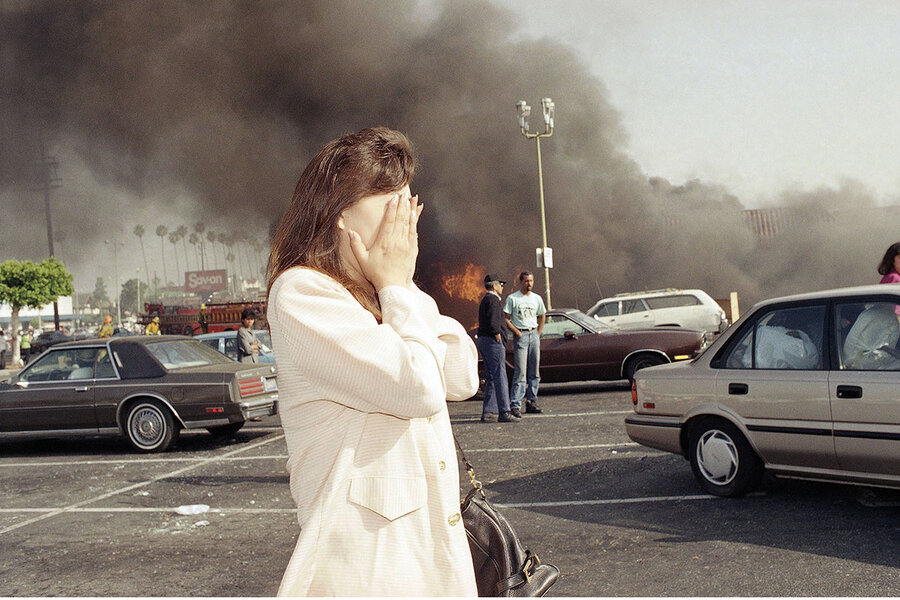 And the outcome of a legal proceeding is not necessarily the same as the delivery of justice. A trial weighs a specific incident. It does not delve into what happened in the months and years before those actions, the surrounding culture, or deeper moral implications – even if certain cases seem to take on the weight of those broader societal issues.

“Our community conceptions, our lay conceptions of justice don’t actually match up terribly well with law,” says Monica Bell, a professor of law and sociology at Yale University.

The conditions that led to the nine minutes and 29 seconds of Mr. Chauvin kneeling on Mr. Floyd still exist in other communities, says Professor Bell, and will continue to exist if citizens don’t act.

“Let’s think about the work we have to do so that we don’t have to have these types of trials ever again,” she says.

There have been many instances of law enforcement using extreme force against minority suspects in recent years that have roiled the nation and outraged some citizens. Very few of these incidents have resulted in convictions of the officers involved.

To begin with, it is uncommon for prosecutors even to bring charges in those circumstances. The shooting of Michael Brown in Ferguson is a case in point: A grand jury declined to indict the officer involved, Darren Wilson. Two St. Louis prosecutors considered whether to charge Mr. Wilson. Both decided against it.

“Can we prove beyond a doubt that a crime occurred?” said Wesley Bell, the top prosecutor in St. Louis County, when announcing his decision in July 2020, six years after the shooting. “The answer to that is no.”

Lack of definitive evidence can be an impediment at trial. George Zimmerman – not a police officer but a community watch volunteer – described his tussle with Mr. Martin as a life-and-death struggle. He was initially not charged, as police said there was no evidence to rebut his self-defense argument. Tried in 2013, Mr. Zimmerman was acquitted of second-degree murder and manslaughter charges.

Juries can be sympathetic to the way police frame violent encounters even if some evidence presents another side to the story. The severe beating that Los Angeles police officers gave Rodney King following a speeding stop in 1991 was among the first such cases recorded on video by a bystander. At trial the four officers said they were alarmed by Mr. King’s “bizarre” behavior and his refusal to lie down as requested. The defense analyzed the tape blow by blow, slowing it down and robbing it of shock value. All four officers were acquitted of assault.

In that context, the guilty verdict in the Chauvin case is unusual. The primary reason Mr. Chauvin was convicted may have been the extraordinary video of his encounter with Mr. Floyd, which provided an unfiltered view of what the then-officer did, and how calm he seemed as he did it.

“That’s one thing that’s very different between this case [and the case of Mr. Zimmerman], where you had only the word of Zimmerman, which put the jury in a box, and which to a great degree foreordained the outcome,” says Robert Spitzer, a political scientist at the State University of New York at Cortland.

Breaking the “blue wall” of silence

Other officers testified that Mr. Chauvin’s use of force was excessive, and medical testimony named him as the cause of Mr. Floyd’s death. The video also viscerally demonstrated the sheer length of time involved, more than nine minutes.

It’s important to remember that the legal standard in such cases is that jurors envision they are an officer on the scene, having to make an instant assessment about whether to use force, says Professor Spitzer. Mr. Chauvin’s actions extended far beyond that time frame. On the video, he did not even appear stressed.

That’s in contrast with a case earlier this month in which, during a traffic stop near Minneapolis, a police officer fatally shot a suspect, Daunte Wright, who had lurched back into his car. Body camera footage showed the officer shouting “Taser!” repeatedly before shooting Mr. Wright, and police officials said she mistook her gun for a Taser. She has now been charged with second-degree manslaughter.

When tensions are high and people are making split-second decisions, even professionals can make mistakes, says Professor Spitzer.

“When you boil these down on a case-by-case basis, there are lots of factors at work, which all complicates the relationship between an individual case and individual facts versus what seems to be happening nationwide,” he says.

How individual cases add up

Still, it’s possible for those individual cases to add up and eventually affect the country at large, says Brandon Terry, a professor of African American studies at Harvard University. He’s cautiously optimistic that the way the nation talks and thinks about police use of violence is changing.

“It’s a really vibrant part of American culture, which is a litigious culture, to treat trials as moments of civic reflection,” Professor Terry says.

For instance, looking back to 1992, it’s not hard to see a more careful discourse on the subject in 2021. Back then, the media and public referred to the “Rodney King” trial, even though it was police officers, not Mr. King, who were the defendants. Today, it’s the “Derek Chauvin” trial, since he was the one charged – not the “George Floyd” trial.

There have been cracks in the “blue wall” of police silence, with many law enforcement officers testifying. That’s a big change even if it is intended to paint Mr. Chauvin as an outsider and head off more sweeping reforms, Professor Terry says. And some states are moving on reform bills in any case – Maryland this month passed legislation to limit police officer use of force and restrict no-knock warrants.

“People are connecting the Chauvin trial much more tightly to a demand for democratic accountability in policing and … they have much more sophisticated visions about what that would look like,” he says.

Progress on what Professor Terry calls “procedural justice” – rules that govern institutions – is not the same as progress on the deeper moral questions of substantive justice.

But think of all the young people who mobilized in the biggest social movement in American history last year, he says, in part because they are ashamed of what happened to Mr. Floyd, and because they think their society can be better than it is.

“Do I think [the verdict] will stop police brutality? Absolutely not. But movements need victories,” says Professor Terry.

It remains to be seen how far this conviction can push voters, politicians, and police departments to start rethinking policing in a way that will prevent deaths such as Mr. Floyd’s from happening in the first place, adds Colorado University law professor Aya Gruber, who has studied leniency standards toward those who kill minorities.

It is a statement on American society that it takes a nine-minute video that horrified much of the rest of the world to get a police brutality conviction, Ms. Gruber says.

“Seeing this as the finishing line is totally premature,” she says. “This is the starting line.”

The Chauvin verdict should be celebrated