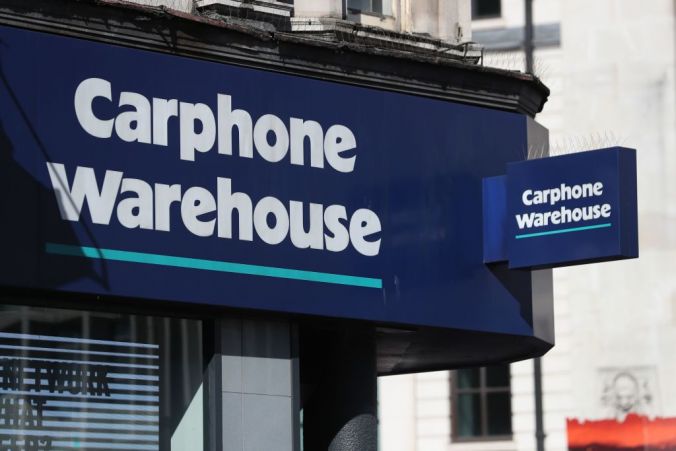 A total of 486 redundancies are expected as a result of the move. Photo: Daniel Leal-Olivas/AFP via Getty

Carphone Warehouse is to close more than 80 stores in the Republic, with the loss of almost 500 jobs.

The company has 69 standalone and 12 stores within stores. A total of 486 redundancies are expected as a result of the move, first reported in The Irish Times.

Staff have been informed of the decision, which had been expected in recent days, and the company’s website has also been shut down, effective immediately.

In a statement, parent company Dixons Carphone blamed changes in how people are shopping for the decision, saying it was “a necessary step” in the company’s mobile transformation.

Footfall in the stores has fallen more than 40 per cent in the past year, the company said, and customers are increasingly buying sim-free handsets.

The decision comes just over a month after Vodafone, the State’s largest mobile operator, said it was to stop selling phones or plans through the retailer. It also follows discussions with Eir over its future relationship, and comes after its parent company shuttered more than 530 stores across Britain last year with nearly 3,000 job losses.

Many of the group’s mobile phones services in Britain are now sold from Carphone Warehouse outlets located within Currys PC World stores as well as online. The chain opened its first Irish store in 1996, and agreed a £3.8 billion (€4.3 billion) merger with Dixons in 2014.

The decision is not expected to impact on its sister companies. Currys PC World has 10 stores locally.

The Tánaiste and Minister for Enterprise,  Leo Varadkar said: “This news will come as a major blow to Carphone Warehouse employees and their families after what has been an incredibly difficult year.”

He said the Government will make all necessary State assistance available to the workers.

“I know many high street retailers have been under pressure for some time now, as consumers move online – a shift which has been accelerated by the pandemic and I understand that this has contributed to the Carphone Warehouse’s decision today. Government is working in a coordinated way, through the Retail Forum, and has committed unprecedented levels of financial aid to support retail businesses through these exceptionally difficult times and will continue to do so,” Mr Varadkar said in a statement.