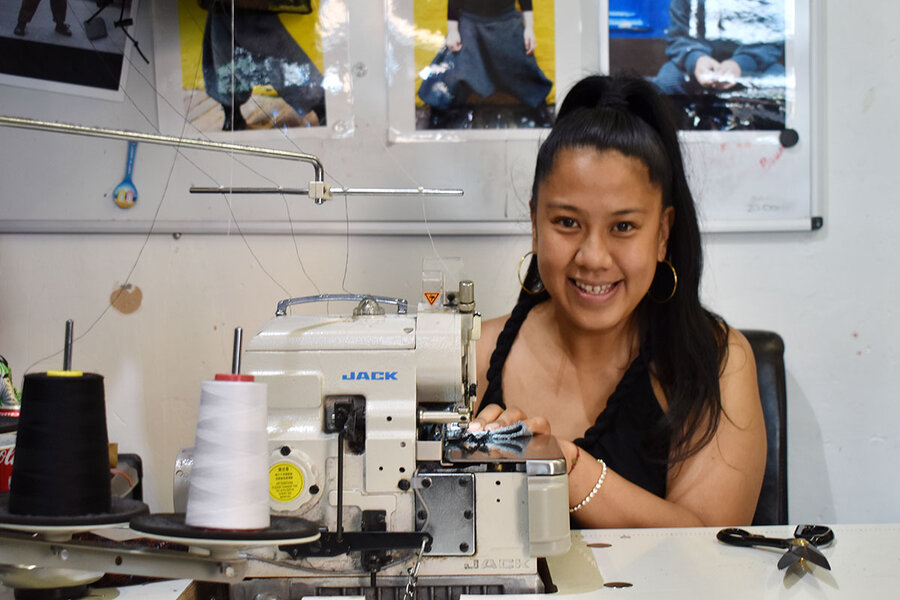 Maria Castillo still recalls the stigma attached to the concept of “domestic abuse” in early 2000, when she fled her partner with their then-3-year-old son.

He had knocked on the front door “looking for an excuse to come in,” before violently attacking her for hours in front of his friends. She recalls her face had swelled to the point of numbness. “I didn’t even look in the mirror. … I just grabbed whatever I needed to grab and left.”

But finding safety and sympathy wasn’t easy. When she sought help at a local police station, she says, an officer referred to her case as “just a domestic.” “The word ‘domestic’ was used as an insult,” she recalls. “It was all still very hush-hush. Domestic violence wasn’t talked about at all.”

The U.K. is putting together a once-in-a-generation bill that will redefine what domestic abuse is. In doing so, it could provide a lasting foundation for survivors to restart a life of agency, free from violence.

While societal attitudes have changed over the past two decades to allow for more open discussions about violence from intimate partners, the law largely has not – until now.

Parliament is pushing through a landmark bill that will introduce a first-ever statutory definition of domestic abuse in Britain and offer new support and protections for its victims. The reform comes as domestic abuse calls have spiked during the pandemic, with lockdowns trapping people with their abusers in the same households for extended durations.

But the reforms, which are expected to be passed by late spring, still come within a larger context of misogynistic crime and violence against women, like the killing of Sarah Everard in March, that will require broader societal change and education.

The pandemic and domestic abuse

Domestic violence and abuse had generally been in decline in Britain prior to the pandemic; between 2005 and 2019, domestic abuse fell year-on-year. But distressed calls to domestic abuse hotlines have soared more than 60% compared with the start of 2020. More than triple the number of people died at the hands of partners in late March in the United Kingdom’s first lockdown, compared with the same period in 2019. And in the period from March to June 2020, there was a 7% rise in domestic abuse offenses recorded by police.

Complicating the problem is the patchwork network of resources, both official and nongovernmental, available to aid survivors of domestic abuse: what many in the sector describe as a “postcode lottery.” Domestic abuse services vary in both quantity and quality between regions and localities, a problem exacerbated by bigger, corporate charities swallowing up vital government funding at the expense of smaller, community-based services left to fend for themselves.

Kayliegh Richardson, a family lawyer and senior lecturer at Northumbria University in Newcastle, England, says “a lack of consistency across the country” has hamstrung help for survivors in the U.K.

“You end up in a judicial and support service lottery where depending on where you live there will be more services available, but also the approach from judges to two [similar] cases will be completely different. And that’s definitely continued in lockdown.”

Ms. Richardson says that courts have been reluctant to grant temporary occupation orders, whereby an abuser is barred from a property shared with the victim, during the pandemic, “because [judges] say the perpetrator doesn’t have anywhere to go or they might be working from home. And so if they’re excluded from the property, it will have an impact on their business and their livelihood.”

The pandemic has allowed some opportunities for progress. Courts have permitted survivors to obtain non-molestation orders – the equivalent of a restraining order in the U.S. – without physically appearing in court, thus avoiding face-to-face meetings with abusers.

But the pandemic, by and large, has caused havoc. Research submitted to British lawmakers by Ms. Richardson shows that over 80% of organizations have postponed or withdrawn some of their services, including face-to-face appointments and group counseling sessions, because of lockdowns and social distancing measures. Fundraising and educational activities have also been delayed, and therapeutic work for adults and children has been canceled since March 2020. And almost a quarter of refuge accommodations have been forced to deny entry to many fleeing home in the past year.

The new law, once it is passed, will solve some of these problems. Its definition of domestic abuse will include not only physical harm, but also emotional abuse, coercive behavior, and even financial abuse. It will also recognize technological abuse, such as spying on a partner, online harassment, and taking control of personal devices.

In addition, the law will place a duty on local authorities to provide survivors and their children with accommodation and specialized support in refuges and temporary housing. Survivors will also be granted special measures like appearing in court via video link, and protection from being cross-examined by their abusers in family courts.

Still, holes will remain, experts say. Migrant women in abusive relationships have no access to public funds for legal representation and no standardized, secure avenue to report abusers without the risk of deportation. And while the bill requires local authorities to provide accommodation-based services for those fleeing abusive relationships, not a single refuge is currently available to men in London – despite 1 in 3 people experiencing domestic abuse in the capital city being male.

The new efforts to address domestic abuse have taken place amid renewed fierce debate on gender-based violence and misogyny, particularly since the abduction and killing of Sarah Everard by a London police officer. The 33-year-old disappeared on her walk home in early March. As police intensified their search for Ms. Everard, local women were warned by London’s Metropolitan Police about venturing outdoors alone. With walking being one of the few activities allowed during Britain’s lockdown, the suggestion sparked anger.

As women shared stories on social media of walking home at night, the British government amended the domestic abuse bill so that police would be able to record misogyny as a hate crime in England and Wales beginning in the fall. Public discourse also turned to education. Kit Malthouse, the policing minister, suggested boys should be taught at school how to respect women and girls.

Maria Brennan, a program manager for female empowerment organization Rising Girl, says that while teaching gender equality in mixed schools is important, girls benefit from specific education to recognize early signs of abuse toward themselves or their peers.

“We already know there aren’t many spaces for girls to have these conversations from a young age,” she says. “I know I didn’t have this program in my school and it was a really important reason as to why I applied for this job and why I do it.”

While they still bear the scars of their past, women like Ms. Castillo have carved a new life for themselves. More than 20 years since fleeing to temporary accommodation, Ms. Castillo now runs her own business at the heart of London’s famous Camden Market. “A lot of women that come out of refuges end up going back to their abuser because it’s too hard out there. They don’t know what to do,” she says.

Lois Perry endured all forms of abuse in a two-year relationship from a partner who, she says, carried out an “annihilation” of her “entire personality,” taking control of her phone and social media accounts, and destroying relationships between her and family members. But after leaving her relationship, Ms. Perry reunited with her family and has forged a career in broadcasting and activism. She says she has found faith and stability that sustains her rehabilitation.

“Have you ever seen Indiana Jones when he goes into a trance when they burn him and he comes out alive? It’s like that. … It’s like I’ve been burnt and come out.”