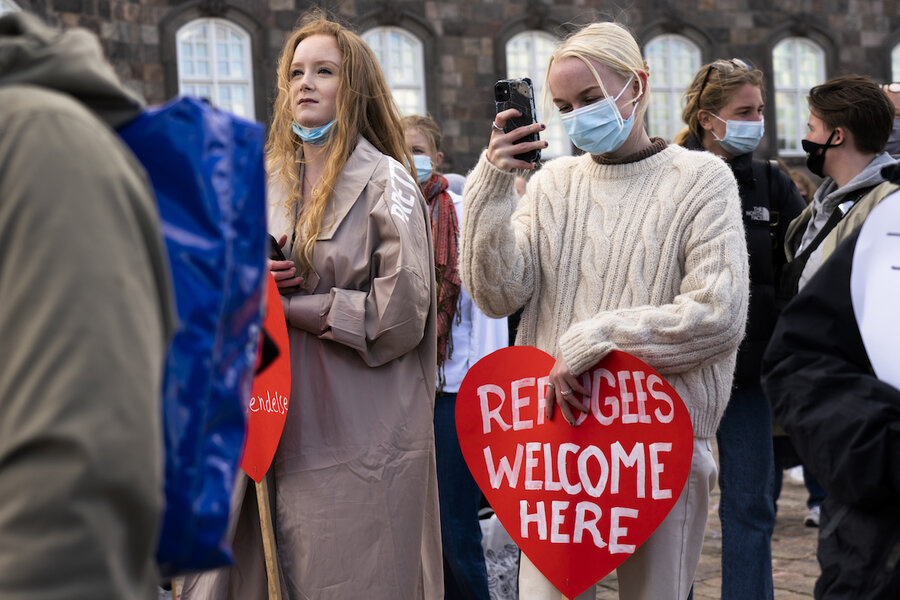 The Syrian refugee had fled the civil war with her family in an all-too-familiar journey across the sea to Europe, where they finally arrived in Denmark and were granted asylum in 2015. Yet six years later, she was being told she had to go back – alone, and soon.

Ten years after the start of the uprising against Bashar al-Assad’s regime, Denmark has become the first European country to start revoking the residency permits of some Syrian refugees, arguing that the Syrian capital, Damascus, and neighboring regions are safe. Yet few experts agree with Denmark’s assessment.

“There are no laws in Syria that can protect me like here in Denmark,” Ms. Satouf said with palpable anxiety. “My father is sought after in Syria, so of course I will be arrested upon my return.”

In the past six years, Ms. Satouf has learned Danish, graduated from high school with flying colors, and is now studying to be a nurse while working in a supermarket. She can’t understand why a country that encouraged integration and which needs nurses amid a pandemic would expel her and others, mainly women.

For now, the decision affects only people from certain areas of Syria who got their initial asylum because they were fleeing civil war. It doesn’t include those who can prove a specific threat to their lives, such as men who could face conscription into Mr. Assad’s army.

“This is very much down the line of gender,” said Ms. Satouf’s lawyer, Niels-Erik Hansen. “When I have a male client, I will send him right away to the Immigration Service and he will get asylum within three weeks. A female client will get rejected … and we will have to take this case to the refugee board. So when I look into the pile of cases that I’m representing at the board, it’s like 90% women and 10% male.”

Because Denmark has no diplomatic relations with Syria, those who refuse to leave the country cannot be sent to Syria. Instead, they are sent to deportation centers, separated from family, unable to work, and withdrawn from education programs.

Single women are likely to be sent to the Kaershovedgaard deportation center, a remote complex of buildings about 300 kilometers (185 miles) west of Copenhagen. Access is strictly limited, but Red Cross photos show rudimentary infrastructure where cooking is banned and activities are restricted. Even Danish language lessons are not allowed.

“It is like a prison, but they are allowed to go out in the daytime,” said Gerda Abildgaard, who has visited the center for several years for the Red Cross.

The policy is the product of a left-wing Social Democratic-led government, whose immigration stance has come to resemble that of far-right parties after years of large migrations peaked in 2015 with 1 million new arrivals in Europe. The large numbers of people coming from Africa and the Middle East energized populist movements across the continent, pushing parties that had a more welcoming position to embrace stricter policies.

It’s a dilemma that Democrats are facing in the United States, as a surge of young migrants at the Southern border tests President Joe Biden’s campaign promise to accept more refugees than in the Trump era.

Though the numbers of asylum-seekers in Denmark have since plummeted, particularly during the pandemic, Prime Minister Mette Frederiksen reiterated in January a vision of having “zero asylum-seekers.”

The Danish government argues that it made clear to the Syrians from the beginning that they were being offered only temporary protection.

“It’s a cornerstone of our legislation … that you get temporary protection, and as soon as you don’t need protection anymore, you will have to leave Denmark,” said Rasmus Storklund, a Social Democratic lawmaker and member of Parliament’s Immigration and Integration Committee.

Standing in front of the deportation center’s heavy gates, Ms. Abildgaard pleads: “But is Syria safe again? It’s only Denmark who says that. All the other European countries don’t say that. Only Denmark.”

This week, experts who contributed to reports on which the Danish authorities based their assessment condemned that conclusion, warning in a joint statement published by Human Rights Watch that “conditions do not presently exist anywhere in Syria for safe returns.”

In government-controlled areas, including in the suburbs of Damascus and many parts of central Syria previously held by opposition rebels, the security situation has stabilized, but entire neighborhoods are destroyed, and many people have no houses to return to. Basic services such as water and electricity are poor to nonexistent.

In a borderless European Union, Denmark tightening migration regulations means that people facing deportation may flee to neighboring Sweden or to Germany, which welcomed refugees in past years but where there is little political will now to take more.

“This is also a lack of solidarity with the rest of Europe,” said Mr. Hansen, Ms. Satouf’s lawyer. “As the first country that starts to withdraw residence permits for these refugees, we are, in fact, pushing people to go to other European countries.”

Denmark’s approach marks a dramatic transformation of a nation that was the first to sign the 1951 U.N. Refugee Convention, and which was long seen as a paragon of openness and tolerance.

“We used to be known as one of the most humanitarian countries in Europe, with a lot of freedom, a lot of respect for human rights,” says Michala Bendixen, the head of Refugees Welcome Denmark, a non-governmental group. Now, she notes, Denmark’s policies look much more like those of countries with hard-line immigration policies, like Hungary.

The ultimate goal, Ms. Bendixen believes, is “making it less attractive for refugees and foreigners to arrive in Denmark.”

On Wednesday, hundreds of people gathered in front of parliament to protest the deportation orders, surrounded by Danish friends, classmates, and work colleagues.

Addressing the crowd, a nervous Ms. Satouf told her story.

Others also spoke: A brother and sister facing separation, siblings whose residence permits were expiring the next day, a high school student surrounded by her Danish classmates, a single woman who couldn’t comprehend how Denmark, with its claim to uphold and defend women’s rights, could be doing this.

“They say I should marry someone who has political asylum to stay here,” said Nevien Alrahal, who traveled to Denmark with her elderly father and who faces her final appeal on Friday. “That’s a choice I don’t want to make.”