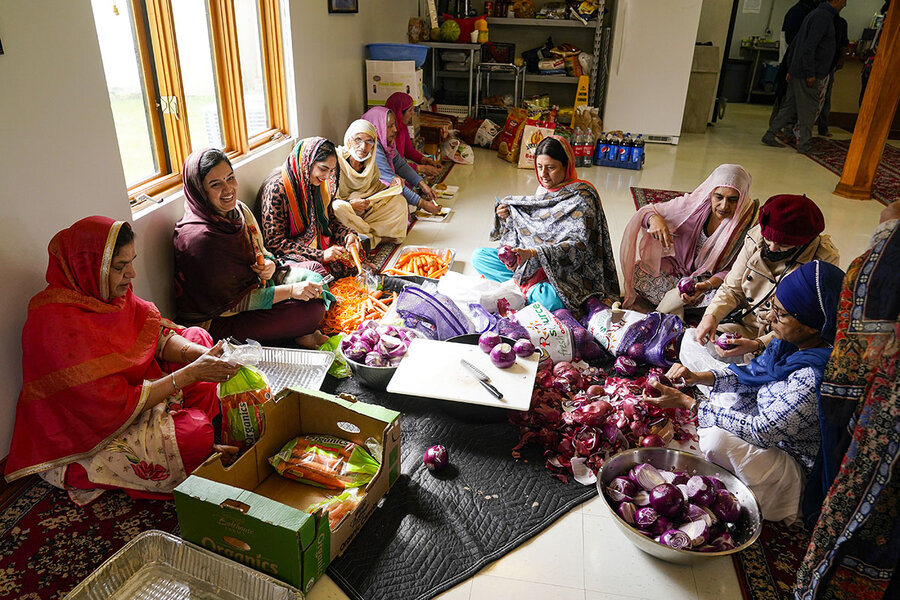 Flags across Indiana and the country were lowered to half-mast following the mass shooting at a FedEx facility in Indianapolis last week that left the shooter and eight people dead. But the Sikh flag mounted outside the temple, or gurdwara, in this Indianapolis suburb stayed flying high, almost defiantly.

Four of the people who died in the FedEx shooting were Sikhs, members of what is at once a religious minority and also the world’s fifth largest religion. And no act of hate could bring the flag down, says Narinder Singh, a member of Greenwood’s Gurdwara Shri Guru HarGobind Sahib Ji.

“It’s not the first time it’s happened,” says Mr. Singh. “In 1984, in India, we got genocide, so we’ve come to know very well how we feel,” he says of the Anti-Sikh Riots in which thousands of Sikhs were killed. But since the founding of the religion in the 1500s, he says, Sikhs have been able to look at the high-flying flags outside their temples with a sense of resilience and pride, even in the face of tragedies.

In Indianapolis, the Sikh community is leaning on members of the faith after the shooting at a FedEx facility, where half of the victims were Sikh – finding strength and resilience in one another.

The first Sikhs immigrated to the United States in the 1800s. After 9/11, hate crimes against Sikhs spiked here as they were targeted for wearing turbans. In 2012, a white supremacist opened fire on a temple in Oak Creek, Wisconsin, killing seven. Police didn’t initially suspect that the FedEx shooting was a hate crime, but on Tuesday new information surfaced showing that the shooter had browsed white supremacist websites.

In the aftermath of the Indianapolis attack – amid America’s tide of mass shootings – members of the Sikh community are turning to one another as they search for solace after the devastation. In the past week, vigils have been held, and prayer services and funeral preparations are underway. For the victims’ families, offers of legal and financial assistance have poured in from Sikhs across the U.S.

“Everybody’s just reaching out, and people that we don’t even know are reaching out,” says Gurinder Johal, stepping out of a temple in the nearby neighborhood of Acton after a prayer service for his mother, Amarjeet, who was killed in the shooting.

“It’s not going to be easy, but least they’re there trying to give their support to make it as easy as possible, and share the pain,” he adds. “Because the families that lost a loved one, obviously, they’re in pain. But the family that didn’t lose a loved one – they’re also in pain.”

Chirjeev Kaur, also a member of the Acton temple, Gurdwara Sikh Satsang of Indianapolis, says that since the shooting, local Sikhs have been gathering in committees to direct support to each victim’s family, as well as the families of those who were injured. They’re also working to get in contact with victims’ extended family members who still live in India.

“We over here are a small number, and a very close-knit community,” says Ms. Kaur, who spent her Sunday at a prayer service. “And now, the community itself is kind of in a state of shock right now. But like in the past, we have been resilient. We will come through it all.”

“Everyone is leaning on each other,” she says.

For Simran Jeet Singh, a senior fellow with the Sikh Coalition, a national advocacy organization based in New York, the community resilience he’s seen in Indianapolis isn’t surprising. “It’s hard to imagine feeling this [shooting] as something other than targeting, because we’ve been in this position over and over and over again in this country,” he says.

But at the same time, he adds, “We don’t have people saying, ‘We’re stepping away from this because it’s too dangerous.’ They’re doing the opposite. They’re leaning right back in and saying, ‘We’re going to be here with each other and for each other.’”

Indiana is home to about 10,000 Sikhs, the Sikh Coalition estimates, and the total number of Sikhs in the U.S. is pegged at about 500,000. In Indianapolis, the Sikh community is largely made of immigrants who have come to the U.S. for economic opportunities, like the jobs at FedEx. But coming to America also comes with the quintessentially American risk of gun violence.

“The main reason why people migrate here is because of the picture that’s painted everywhere else about America. There’s opportunities here,” says Mr. Johal. The tragedy at the FedEx facility, he says, presents a chance not only to examine gun violence, but also reinforce education about ethnic and religious minorities.

“When you come to a different country, there’s going to be other factors that come along with it,” he says. “But those factors all can be cleared off [with] just a little bit of education.”

While Indianapolis-area Sikhs have found their community to be a backbone after last week’s shooting – especially amid failures in existing red flag gun laws, and the possibility that the attack was specifically motivated against members of their faith – they also have continued to advocate for all the the victims of the tragedy. “Those [other] four families, they are also in our prayers,” says Maninder Singh Walia, an Indianapolis Sikh who, along with Ms. Kaur, has come to serve as a de facto community spokesman.

Back in Greenwood, Mr. Singh looks out the window of the temple at the flag, billowing on a windy spring day, and points out the lesson it offers as the community tries to move forward from its most recent tragedy:

House to vote on Washington DC’s bid for statehood, again