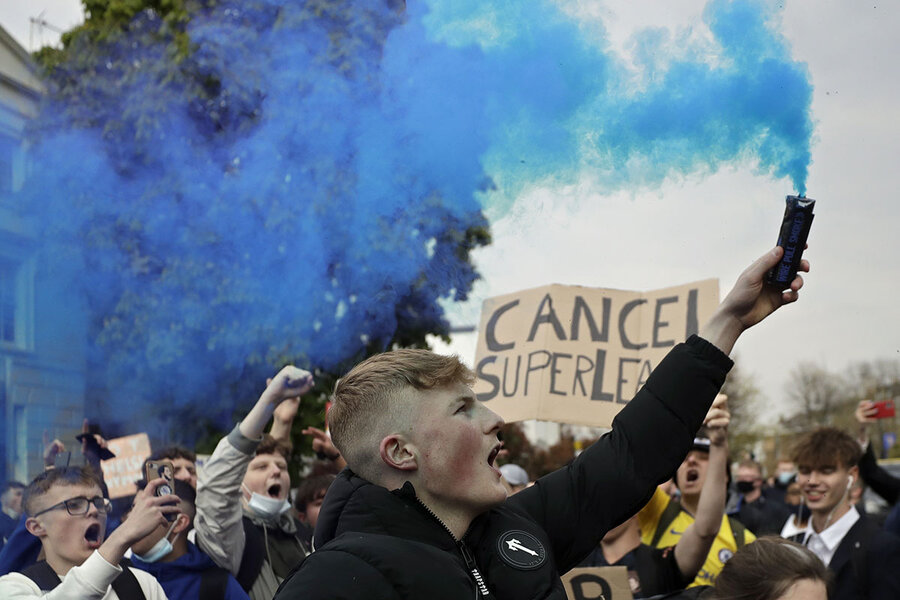 When, in the late hours of Sunday evening, 12 of European soccer’s powerhouses announced the creation of a brand new European Super League, few could have foreseen the rapid collapse that would soon follow.

The plan was meant to award the founding clubs a share of upwards of £4.8 billion ($6.6 billion) a season from global broadcasting and sponsorship rights for a closed league in the American tradition, like the NFL. Instead, it earned fierce popular and political backlash.

British newspapers described the scheme as an all-out “war” by foreign owners on the beautiful game. British Prime Minister Boris Johnson dubbed the move a “cartel” in need of a “legislative bomb.” Within 72 hours, mass protests across the United Kingdom had tilted owners’ heads enough that they scrapped the Super League at breakneck speed.

European soccer’s values of community and custodianship were behind the three-day rise and fall of the proposed Super League, which would have imposed a U.S. corporate sports model on the continent.

At the heart of the furor was a clash of values, say observers: the cherished models of meritocracy, custodianship, and European fan culture colliding with the U.S. corporate sports model. The Super League project, which involved multiple American-owned teams, attempted to impose a U.S. version of sports ownership and culture on the world’s elite soccer clubs, without taking into account the history and values that those clubs – and more importantly, their supporters – were built upon.

“In England, football isn’t just a game. It’s an escape. A family. A belonging. An identity,” says James Condon, a Londoner currently living in New York City and a lifelong fan of West Ham United, a team traditionally considered Premier League minnows but threatening to qualify for the premier European competition this season.

“In the last 30 years of supporting West Ham United, I’ve experienced tremendous highs and shattering lows. Every game, every kick; it all mattered. Will we be in the Premier League next year? Will we challenge in the upper echelons of the league?” he says. “This year, West Ham have surpassed all expectations and we find ourselves ahead of four of the Super League teams, based on merit, determination, and a desire to qualify in Europe’s top competition. Under the Super League’s proposals, this would all be redundant.”

In English soccer (and European soccer more generally), every club from the amateur level to the top of the elite Premier League is rooted deeply in its community. But it is also part of a massive, fluid structure that changes annually through processes known as promotion, whereby lower-tier teams can climb soccer’s pyramid, and relegation, where a team at the bottom of a league can fall through the trapdoor into the league below. Every team’s place in the pyramid ultimately depends on merit. And the most successful of the Premier League can go on to Europe’s annual top-flight club competition, the Champions League.

The Super League would have created a competition separate from the existing pyramid. English clubs Liverpool, Manchester United, Arsenal, Manchester City, Chelsea, and Tottenham Hotspur – alongside the Spanish troika of Real Madrid, Barcelona, and Atlético Madrid and the Italian trio of Juventus, AC Milan, and Inter Milan – had planned to create what effectively would be a closed competition between soccer’s historic elite. (Eight other teams would also have been part of the Super League, but hadn’t been decided before the plan collapsed.)

The Super League closely models North American sports leagues such as the NBA and the NFL, in which franchises use joint commercial agreements and collective bargaining with players to level the playing field. Stefan Szymanski, a soccer economist and professor of sport management at the University of Michigan, says that despite the United States having its own measures to equalize teams, the decision to scrap a fluid, merit-based model ultimately struck at the core of European soccer.

“American owners, brought up in the closed league system, believed that they could … dispense with the open-league European system and adopt their own form of the closed league, and Europeans just flatly said, ‘No,’” says Dr. Szymanski.

In American sports, fans tend to respect the authority of the owner, often a billionaire. Owners often hoist the trophy on Super Bowl Sunday, for example, whereas that would be anathema abroad. “The fundamental of European soccer,” Dr. Szymanski says, lies in its community-based business approach.

At Arsenal Football Club in London, this clash of business models has existed since current owner Stan Kroenke, who also owns the Los Angeles Rams of the NFL and Denver Nuggets of the NBA, forced through a complete takeover of the North London team in 2018. He scooped up legacy shares from Arsenal fans, who had held them for generations within families as part of their long-standing identity with the club.

Tim Payton of the Arsenal Supporters’ Trust says “the supporter base [being] monetized and … taken for granted” is just the sort of thing that needs to be avoided. He says that Arsenal fans had run the club and attended matches as “custodians.” “Everything just changed since Kroenke arrived. The identity has been stripped,” he says.

“Their connection with their roots”

The current clash has its foundations not in foreign ownership, but in a decision undertaken in the 1980s by an Englishman. Rule 34 of the English Football Association stated football clubs were community hubs, and as such, directors could not take out dividends with all profit reinvested back into the club. That had never been enforced, and so Irving Scholar, a property developer and former chairman of Tottenham Hotspur, floated the club on the stock exchange and paid dividends out without censure – becoming the first football team in the U.K. to do so.

Diego von Vacano, founder of the Yale Soccer Conference on the sport’s management and future, says soccer’s march to globalization, in tandem with society’s overarching move to economic and cultural globalization, is what has driven the current crisis in values. New international stakeholders, in both ownership and fans, weakened the connection between club and community. “This is a clash between the culture of football and the business model,” he says.

Others say the clash is emblematic of something much wider. “It’s not Americans versus Brits; it’s the clash between the nature of sport and the nature of capitalism,” says Martin Cloake, co-chair of the Tottenham Hotspur Supporters’ Trust. “Nobody is suggesting a utopian communist future, but there’s a conversation in the wider world on what kind of capitalism we want, where should the state be involved, and what the limits are.”

The heat has yet to dissipate. In Britain, both the prime minister and leader of the opposition hosted emergency meetings with fan groups to discuss potential legislative action and government reviews. But fans of European soccer feel they have wrestled back the sport’s soul in a David versus Goliath moment, and that they have warned foreign ownership to treat their institutions, ones that bind generations of fans and embrace international newbies, with better care.

“There are people who are fans who live nowhere near a club, but their family lived in the area two or three generations ago around the stadium and that’s their connection with their roots,” says Mr. Cloake. “It can sound soppy, but that’s why people have got emotional about it. It’s personal. It’s not just going to see a film or concert, which are great, but it’s not the same communal experience of a football match.”

Mr. Condon, the West Ham fan, and many others believe that the sole-owner model is coming to an end. Some hope for a German-style fan ownership, where private investors are barred from holding a majority of the club – perhaps a reason why the German clubs invited to the Super League declined. Empowering fans via such shareholding would bring European soccer back full circle to its origins.

“The owners of our football teams in England have a duty of care to protect this fragile balance and they will do well to remember that.”