This ECG device can be easily constructed in less than 1 hour. Assembly requires only the most basic electronics skills. Simple circuit design, good layout, low cost and good performance of the device are due to the presence of several boards:
– ECG module AD8232- Board Arduino Nano- Bluetooth module HC-05 or HC-06-Wires-Soldering iron
-Smartphone on the platform Android
No programming knowledge is required when assembling this device, as all you need to do is install the app by opening the apk file from your smartphone and upload the provided Arduino sketch to the Arduino board.
This project is not a medical device and is not intended to be used as a medical device to diagnose or treat any condition.
The ECG device is connected to a human, and for safety reasons and to avoid damage to the device, only low voltage batteries should be used. < br> Do not use AC power supplies, transformers, or other voltage sources to avoid serious injury or electric shock to yourself or others.
Do not connect any AC powered devices or devices to the ECG device provided here.
Use only a battery (maximum voltage: 9V) for power.
The AD8232 uses a driver (RLD) to reduce common mode noise. As stated in the AD8232 component datasheet: “Note that when using this amplifier to drive an electrode, there must be a resistor in series with the output to limit the current to always be less than 10 μA even under fault conditions.”
Standard AD8232 modules typically use a 360 kΩ resistor. It is installed in series with the RLD output since its supply is 3.3V. The Arduino Nano board requires at least a 6V battery to power it (7V is the value recommended by the Arduino), so a higher resistor is required to keep the RLD current limiting below 10μA. 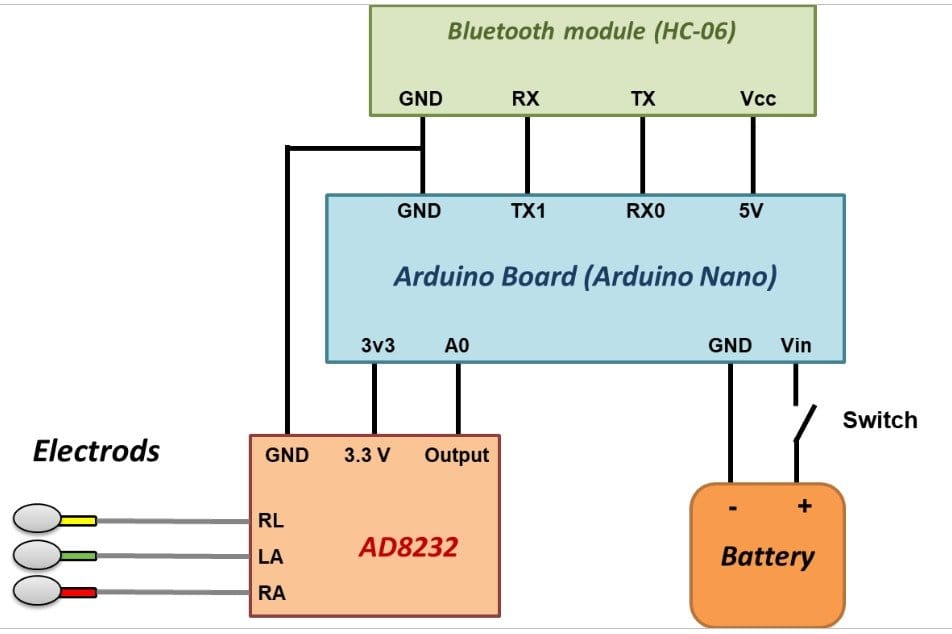 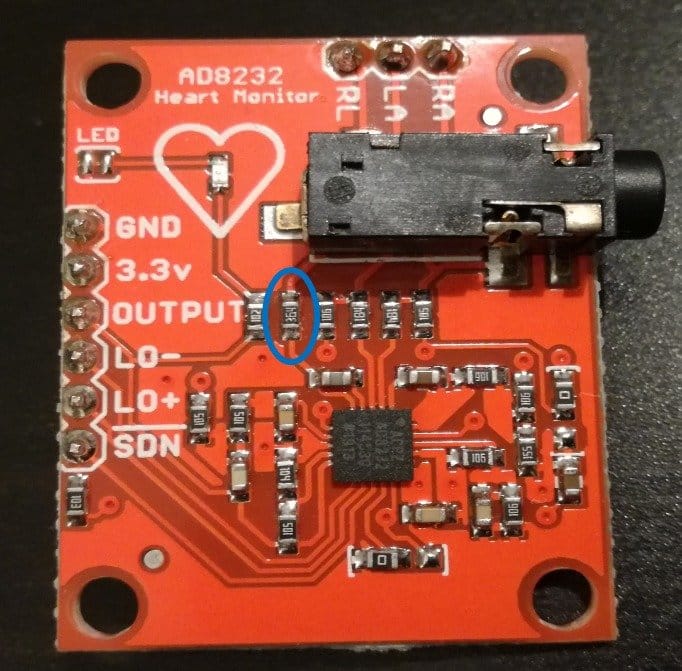 For safety reasons, the RLD output is connected to the electrode via a resistor. Standard AD8232 modules typically use a 360 kΩ resistor in series with the RLD output because it supplies 3.3V. Even if the AD8232 is powered by an Arduino at 3.3V, the battery voltage must be considered. So, for example, if a 9V battery is used to keep the RLD current limiting below 10 μA, a resistor above 900 kΩ (current = voltage/resistance) is required. So the 360 ​​kΩ resistor needs to be replaced with a 1MΩ resistor. This operation is the only one that requires certain soldering skills, since such resistors (SMDs) are very small. 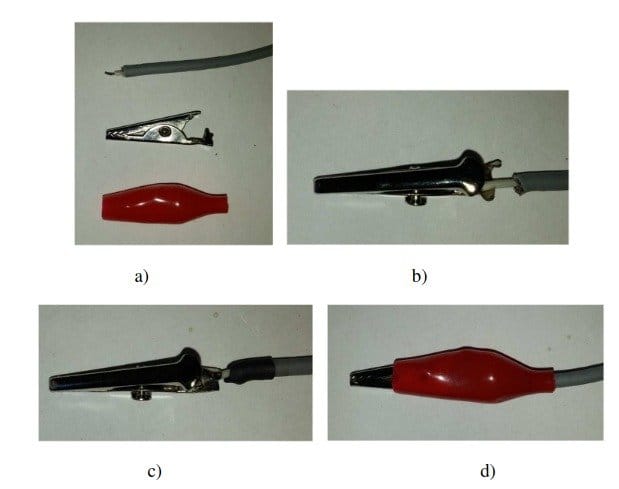 Off-the-shelf AD8232 modules usually include an electrode cable that can be connected directly to the boards through a dedicated connector. However, you can make a custom electrode cable and connect it to the dedicated pins on the AD8332. The cable can be made using coaxial cable (better shielded to reduce external noise), crocodile clip, heat shrink tubing and connectors. 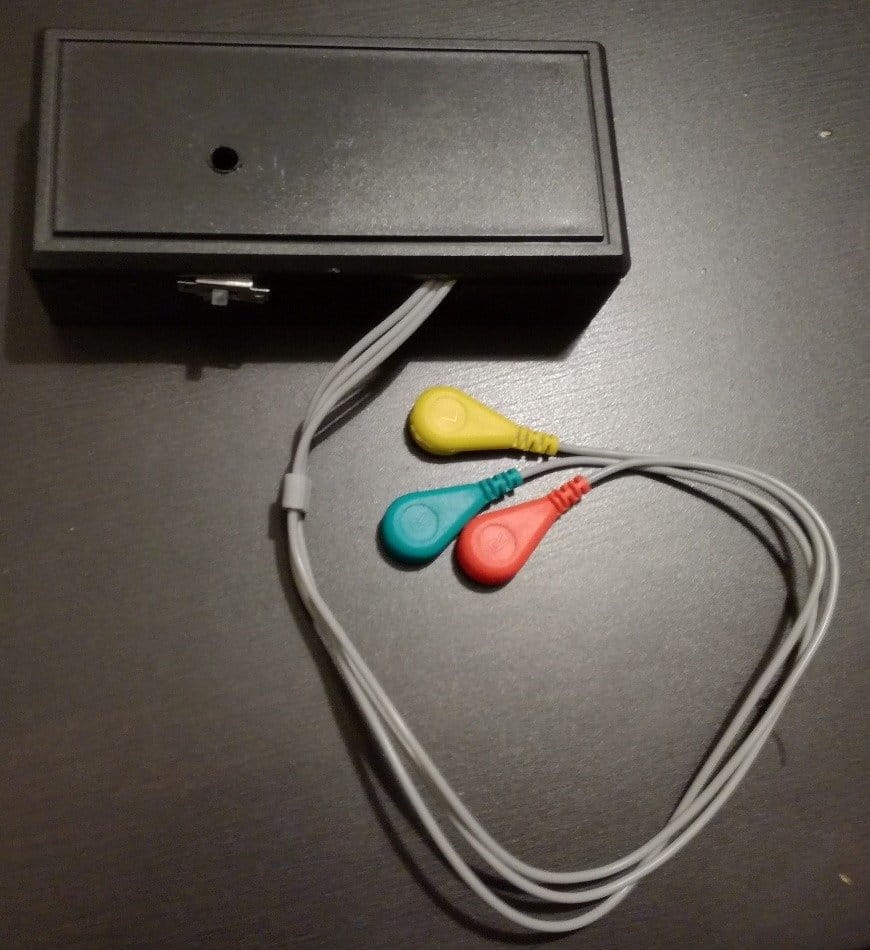 The master uses a plastic box as a body.
The switch must be installed in the positive wire break. Instead of using an additional LED to check that the device is turned on, you can use the LED of the HC-06 module (or other boards), which is lit when the board is turned on. Several holes must be made in the box: one for the switch, one for the electrode cable and one for the LED.
The device should only be powered by batteries, and the voltage should be between 6 and 9 V. The minimum supply voltage recommended for the Arduino nano is 7 V. However, if the batteries are fully charged, the device can operate normally at 6 V (for example, 4 x 1.5 V AA batteries are fully charged or 5 x 1.2 V AA batteries are fully charged). When operating from 6V, the received ECG signal can become quite noisy when the batteries are depleted. Using a voltage value higher than 6V (such as a 9V battery) will help avoid this problem.
The ECG device can work with various Arduino boards as well. Arduino Nano and Arduino UNO have been tested. Other boards can be used (eg Arduino Micro, Arduino Mega, etc.) however the provided Arduino sketch file needs modifications according to the board's functions.
The ECG device can also work with the HC-05 module instead of the HC-06 .
Arduino sketch files can be easily downloaded to the Arduino board by installing the Arduino IDE software (free download from the Arduino official website) and following the guide available on the official website. The wizard provided one sketch file (“ECG_SmartApp_skecht_arduino.ino”) for both Arduino Nano and Arduino UNO (the sketch was tested with both boards). This sketch should work with the Arduino Micro too. For another Arduino board, the sketch file may require changes.
ECG_SmartApp_skecht_arduino.ino
For the device to work, you need to install the EcgSmartApp application on your smartphone. EcgSmartApp is only available for Android (at least Android 6 or higher).
To install the application, you need to copy the “ECG_SmartApp.apk” apk file provided below into the smartphone memory, open it and follow the installation instructions. Before installation, you may need to change your smartphone settings to allow installation of the application from unknown sources (check the “Unknown sources” checkbox in the “Security” menu).
To connect an ECG device to the HC-06 (or HC-05) Bluetooth module, the first time pairing code or password may be requested when connecting Bluetooth to the module: enter “1234”.
If the app does not find the Bluetooth module:
– try to close the app, turn on the Bluetooth connection manually on your device and open the app again.
– check if the battery is low
– try to pair your smartphone with the Bluetooth module HC- 06 (or HC-05) using the smartphone's Bluetooth setting (pairing code “1234”); this operation is only needed once (first connection)
Bluetooth connection problem may occur for some Android One devices and in rare cases also for Android 10. Try another Android 10 device or use a device with Android version lower than Android 10.
Installation file:
EcgSmartApp_ver4_2.apk
The pdfs attached below include:
– complete and detailed instructions for using and assembling the device
– hardware specification
– software features
– search problems
– additional information
ECG SmartApp User Manual Ver3.pdfECG SmartApp Assembly Manual Ver3.pdf]