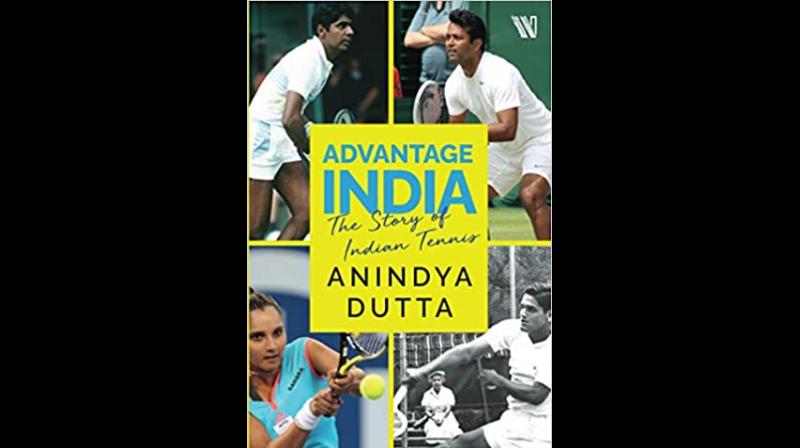 This is the breeziest history of any sport ever written. Avoiding the clutter of excessive chronography and detailed accounts of the operations and decisions of the administration, the story of Indian tennis is told in engaging fashion with anecdote after anecdote bringing out the thrills and excitement of the sport while giving us more than a glimpse into the careers and achievements of old gladiators who have long departed. They had only a wooden racket and strength in their legs to play this fascinating game that is so well captured by the television cameras as the tennis court is just the right size to bring out the totality of the visual spectacle that the game is.

The descriptions of a budding generation of champions, many of whom were Englishmen, should be an eye-opener for young people who may only have heard of the names but only a smattering of description of the skills that made them legends. The stirring deeds of Dr Hassan Ali Fyzee and his brother Dr Akhtar Ali were early signs of how well Indians took to tennis. And then up pops the name of Cota Ramaswami, a batsman who averaged 56.66 in Tests but was never picked again. He had the distinction of winning both the doubles ties that he played in for India in the Davis Cup. And there was the first tennis superstar of India in Mohammed Sleem while Ghaus Mohammad became the first ethnic Indian to get as far as the quarter-finals at Wimbledon.

A fascinating story is the one about how T.K. Ramanathan took his promising young son Krishnan to play in Wimbledon (juniors). While watching the final between Jaroslav Drobny and Frank Sedgman, Krishnan was fascinated by the players and simply kept looking at their faces as they exchanged strokes. “I didn’t take my eyes off their faces during the match until Father tapped me out of my reverie and said, ‘Look at Sedgman’s feet, not his face.’ As I watched Sedgman’s dancing feet and remained in awe of his speed about court, it turned out to be a big tennis lesson for me — It is the feet that play tennis.” What a moment and how beautifully the technicality behind the game is captured.

As we read through a roll call of tennis greats, from two generations of the Krishnans, the Amritraj brothers and down to Leander Paes, a thought that springs to the mind is why did no Indian have the temperament and the wherewithal to win a Grand Slam though it is readily conceded that many of them had the talent. Two of them were particularly world class — Ramanathan Krishnan and Vijay Amritraj, and they came the closest with the former entering the semi-final in Wimbledon twice and Vijay figuring in quarter-finals twice, in the year of the boycott in 1973 and then in 1981. In many such moments when within touching distance of greatest glory, they went down to those who were world-beaters. How come Krishnan could not beat Hoad or Rosewall when it mattered most, or Vijay beat Borg or Connors?

As we moved on from the era of great Indian players, came a time when the exploits of collective Indians in the Davis Cup began to capture national attention. An India that was still far from emerging as a world power in terms of its economy, the national team did well enough to climb the heights to get to the challenge round of the Davis Cup — the first time in 1966 when they lost to Australia and in 1974 when, unfortunately, India did not even get a tilt at the title as the government would not allow the team to play South Africa, which still had Apartheid on its statute. That was a grave early disappointment for a bunch of eager over achievers who were spurred on by national pride.

The era of triumph for Indian tennis players in doubles came much later but when it did it took the nation once again by storm. While flag waving Indian spectators began to resemble Brazilians at soccer games, India became a force to be reckoned with in team events. But it was the Grand Slam titles won in doubles by the likes of Leander Paes and Mahesh Bhupathi, known as the “Indian Express” (they won three titles together and 27 titles in all with different partners) and then by the glamorous star Sania Mirza who took the women’s game to its greatest heights in a transformational role as the Princess of Indian tennis that tennis picked up a huge following in India.

Leander Paes proved to be the most durable of India’s doubles experts, winning 18 Grand Slams (and an Olympic medal) while partnering a variety of international stars like the Martinas — Navratilova and Hingis. The author is at his best in answering a question that would have puzzled many an Indian sports aficionado. This is to do with whether all this hyper nationalism was truly worth it when the country could not so much as win an individual Grand Slam or a Davis Cup or its true equivalent in the women’s game. “What is it about Indians and doubles?” he was asked at a corporate event and he answers it very well in his description of Indians being subtle and clever.

Ramanathan Krishnan responded best to the query on doubles, saying — “Subtle movements, good reactions and supple wrists. Add to that quick thinking on the court. And there you have your answer.” The same attributes could be those that our cricketers have parlayed into success as world beaters. The precision needed in doubles play also enables singles players with versatility, including maybe even John McEnroe of whom it was said — The best doubles team in the world is John McEnroe and anyone.” Indians as a group and playing with anyone may come a close second. This should open our eyes into appreciating more of our sportsmen’s deeds on the wide doubles courts of the tennis world.

Sania Mirza’s career, her exploits on the court, her brush with religious bigots and her fortitude in going on to be a path breaker for NextGen in women’s tennis have been splendidly recaptured. It may be new to many that Rita Davar, an early woman tennis player, had three match points against her Dutch opponent in the junior girl’s final in Wimbledon in 1952, which she lost 7-5, 1-6, 5-7. However, on the distaff side in the Open era, quite none has matched Sania’s trail blazing ways. The book is a must read for all tennis lovers.

7 foods you should never feed your dog

How to make the best carnitas at home

11 of the most fashionable women in suits