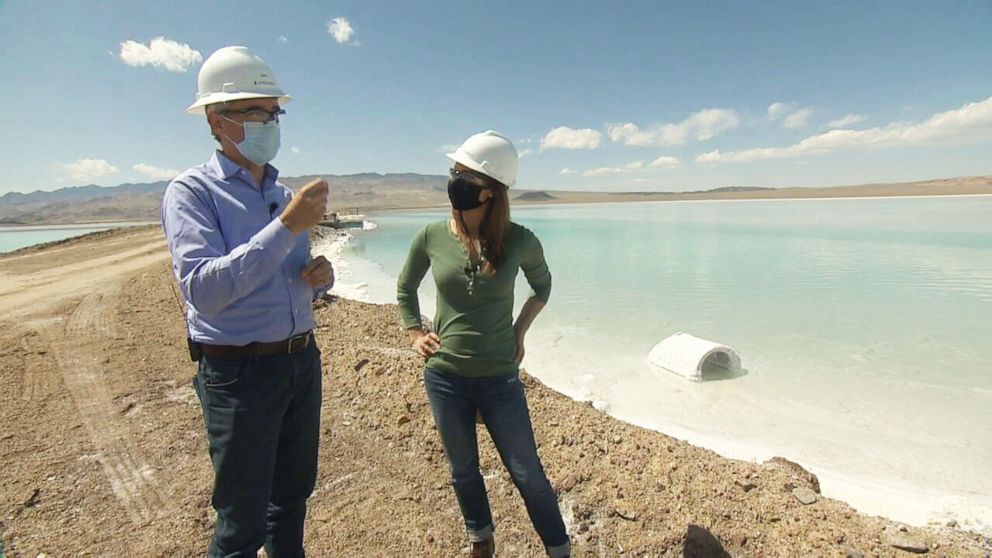 In the Nevada desert, there’s a quiet frenzy building over a rare resource that will be crucial to meeting the country’s goals to slow down climate change.

Lithium, the crucial component in batteries for electric vehicles and renewable energy storage, has mostly been produced in countries like Australia, Chile and China.

There’s only one commercial lithium mine operating in the U.S., a facility in Silver Peak, Nevada, that has been using ponds to evaporate groundwater and harvest lithium since the 1960s. At least two more mines are waiting for final approval to begin construction, one of which would produce enough lithium for 400,000 electric vehicles a year for the next 50 years, according to the company.

But demand is set to explode as much as 1000% by 2030, according to the Energy Information Administration, and possibly even more if more countries continue to adopt policies to encourage the adoption of electric vehicles and renewable energy. And with President Joe Biden’s push to manufacture more electric vehicle components in the United States, the focus has turned to how and where the country can collect rare minerals like lithium responsibly.

At the facility in Silver Peak run by Albemarle Corporation, neon blue pools of water from an underground aquifer evaporate for 12 to 18 months until the company can remove the lithium in a powderlike form, which is then processed into the form used to make batteries.

“That reactivity in nature makes it hard to come by, so you can find it is in the surrounding mountains here and the clays, but not in very what we consider economic concentrations,” he said. “So, what’s happening here in this closed basin over tens of thousands of years is Mother Nature, and we do get some rain here, not a lot, gradually bringing it into this valley.”

Extracting lithium, like any kind of mining, can still create greenhouse gas emissions and toxic waste that could threaten the environment, though one argument for increasing the amount of mining in the United States is increased oversight of those impacts compared to other countries. The amount of the mineral is also finite, and the country will need more ways to recycle lithium-ion batteries if they continue to be used in the future.

Norris said Albemarle is working to produce lithium as efficiently as possible, so they can fulfill the promise that electric vehicles produced with it are better for the environment.

“This is very important to the automotive industry. Our customer base, they’re very focused on this, because the promise they’re giving to you as a consumer is, this is going to be good for the earth, right? So, they’ve got to make sure their supply chain is doing it responsibly,” he told ABC News.

Some environmental advocates are also worried about the impact more production would have on another desert resident that relies on lithium: a rare wildflower that grows on lithium-rich soil called Tiehm’s buckwheat.

Patrick Donnelly, Nevada state director for the Center for Biological Diversity, has been working to block one of the proposed mines that he says threatens the wildflower. He said there’s a “white gold rush” for lithium in Nevada and that while he knows lithium is important to tackling the climate crisis, he also thinks it’s important to protect biodiversity in the region.

“For our part, and as we said, if they could build this mine without destroying this little wildflower, you know, we would probably walk away from this mine and go find a gold mine to fight instead,” he said.

Donnelly and the Center for Biological Diversity have filed to declare Tiehm’s buckwheat an endangered species, which would trigger more protections from activity in the area.

West of Silver Peak, the Rhyolite Ridge Project would extract lithium and boron from the ridge by drilling and blasting ore, crushing it and then drawing the minerals out with diluted sulfuric acid, according to the company’s website.

Ioneer, the company planning the Rhyolite Ridge mine, disputes claims its operation would drive the buckwheat to extinction and says it believes it can relocate and protect the plants.

“We are going to put enormous effort to support this plant and to expand this plan and create a conservation zone that we will never let anybody ever touch,” Ioneer CEO James Calaway told ABC News.

Calaway said that even with the company’s plans, he can’t 100% guarantee the Tiehm’s buckwheat would survive forever, but that it would be a shame if that was the only reason to deny the project.

“To have any chance to meet the targets for electrification in the United States and not be wholly dependent on the Chinese, we really do need to build this project, and we need to build it now, because the time is very important. We are reaching a point where we’re going to have excess demand around the world versus supply,” he told ABC News.

The debate over Nevada’s white gold rush could pose a test for the Biden administration and whether the government can balance the demand for domestically produced minerals to be used in clean energy technology with the strain increased mining could put on the desert ecosystem around it.

Donnelly said the world is facing an extinction crisis as well as the climate crisis and that even as more minerals such as lithium are needed, there needs to be more conversation about how to do so without harming the environment.

“Our advocacy to protect this little wildflower here does not mean that we’re trying to avoid those hard questions or we’re fighting working on lithium as part of our future,” he said.

“And so, you know, we need to have a reckoning about how to do it without destroying biodiversity.”

For more on this story, check out the It’s Not Too Late: Earth Day Special, available on Hulu and wherever you stream ABC News Live at 8 p.m. Thursday, April 22.

Ted Nugent, who once dismissed Covid-19, tells fans he’s tested positive for it