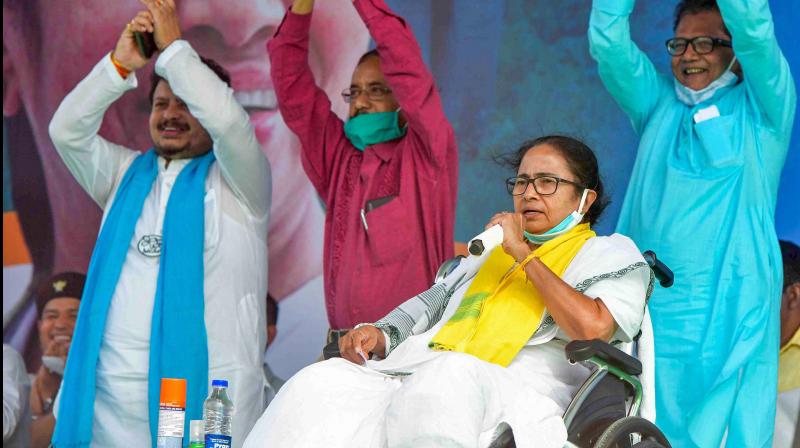 Kolkata/New Delhi: Rattled by the explosion of Covid-19 cases amid Assembly elections in West Bengal, chief minister Mamata Banerjee on Monday cancelled all her poll campaign in Kolkata and also curtailed the length of her district rallies to 30 minutes. The BJP too, singed by criticism over the rising cases and non-adherence to Covid protocols at election rallies, announced that it will reduce the crowd strength at each rally of its star campaigners, including Prime Minister Narendra, to a maximum of 500 for the remaining three poll phases.

The move by the Trinamul Congress supremo and the BJP came two days after Congress MP Rahul Gandhi cancelled his campaign in the state. Ms Banerjee, however, clearly ruled out immediate enforcement of either a lockdown or night curfew by her government in the state. The state witnessed a new record in daily spike in Covid-19 cases on Monday with 8,426 people testing positive and 38 dying in the last 24 hours.

On Monday afternoon Ms Banerjee said in Malda, "At present 2,000 patients are in serious condition in the state. In Greater Kolkata, we will not conduct any big campaigns. All will be small in size. I, myself, will also not campaign in Kolkata. Besides, I have also curtailed my rallies. On the last day of the poll campaign, i.e. April 26, I will hold a small rally only."

Asked about lockdown or night curfew, like it's being clamped in other states to break the chain of infection, she explained, "Nothing will happen out of the night curfew. It is not a solution. We are not imposing lockdown now also. If it is done suddenly, won't the people suffer? Will a lockdown solve the problem? Bus, train and flights are operating. Lakhs of people have come here from outside. I feel that the people should not be forced into anything. What cannot be done under force is possible through love. Solution is we have to avoid political pollution. All we need to do is to be careful."

In the evening the BJP, which has been facing flak from rivals and also on the social media for holding big rallies and road shows of its leaders amid the pandemic, declared that it would not hold big poll campaign rallies in the state.

It said, "In West Bengal, the Assembly polls have been underway. It is also important that this constitutional and democratic process should be completed.

Keeping it in mind BJP national president Jagat Prakash Nadda decided that small public meetings with a crowd of not more than 500 persons will be organised for Prime Minister Narendra Modi and other central leaders in West Bengal. These rallies will be held in open places under Covid guidelines in Bengal."

The saffron party's statement came after its national general secretary Kailash Vijayvargiya tweeted, "In view of the Corona infection, instructions have been received from the Prime Minister's Office to change the form of the meetings of Hon'ble Prime Minister. Special attention should be taken for social distancing."

According to BJP sources, Mr Modi addressed 18 campaign rallies for BJP candidates during his 12 visits to the state so far. In his next visit, the PM is expected to address four rallies: one each in Malda, Murshidabad, Birbhum and Bhowanipore in South Kolkata on April 23, party insiders revealed.

He was earlier supposed to address two rallies in Malda and Murshidabad on April 22, when the state will go to the sixth phase of polls, and in Bhowanipore and Birbhum on April 24, sources said.

The BJP's IT wing head Amit Malviya, who is also the party's co-incharge for the state, said the BJP would leverage its "massive digital footprint" and take the message of Mr Modi and other leaders to lakhs of people.

Meanwhile, state Congress chief Adhir Ranjan Chowdhury is in home isolation after coming in touch with some who tested positive during the campaign. The state government also preponed summer vacation, to be effective in all schools from Tuesday, after reducing the staff strength to 50 per cent at public workplaces.

Pressure on Biden to act on police reform will grow post-Chauvin conviction: ANALYSIS

Do not provoke the youth in the name of religion: KTR lashes out at BJP

Telangana government not keen on curbs till April 30