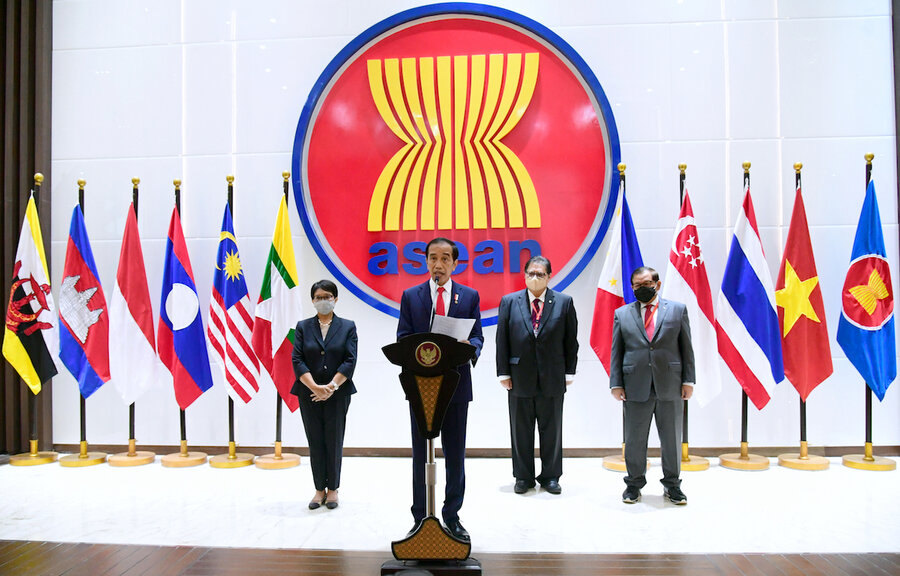 Southeast Asian leaders demanded an immediate end to killings and the release of political detainees in Myanmar in an emergency summit Saturday with its top general and coup leader who, according to Malaysia’s prime minister, did not reject them outright.

The leaders of the Association of Southeast Asian Nations also told Senior Gen. Min Aung Hlaing during the two-hour talks in Jakarta that a dialogue between contending parties in Myanmar should immediately start, with the help of ASEAN envoys.

“The situation in Myanmar is unacceptable and should not continue. Violence must be stopped, democracy, stability, and peace in Myanmar must be returned immediately,” Indonesian President Joko Widodo said during the meeting. “The interests of the people of Myanmar must always be the priority.”

Daily shootings by police and soldiers since the Feb. 1 coup have killed more than 700 mostly peaceful protesters and bystanders, according to several independent tallies.

The messages conveyed to Mr. Min Aung Hlaing were unusually blunt and could be seen as a breach of the conservative 10-nation bloc’s bedrock principle forbidding member states from interfering in each other’s affairs. But Malaysian Prime Minister Muhyiddin Yassin said that policy should not lead to inaction if a domestic situation “jeopardizes the peace, security, and stability of ASEAN and the wider region” and there is international clamor for resolute action.

“There is a tremendous expectation on the part of the international community on how ASEAN is addressing the Myanmar issue. The pressure is increasing,” Mr. Muhyiddin said. The current ASEAN chair, Brunei Prime Minister Hassanal Bolkiah, and the bloc’s secretary general should be allowed access to Myanmar to meet contending parties, encourage dialogue, and come up with “an honest and unbiased observation,” he said.

Such a political dialogue “can only take place with the prompt and unconditional release of political detainees,” the Malaysian premier said.

A formal statement issued by ASEAN through Brunei after the summit outlined the demands made by the six heads of state and three foreign ministers in more subtle terms. It asked for the “immediate cessation of violence in Myanmar” and urged all parties to “exercise utmost restraint,” but omitted the demand voiced by Mr. Widodo and other leaders for the immediate release of political detainees. It said ASEAN would provide humanitarian aid to Myanmar.

In a news conference late Saturday, Mr. Muhyiddin said that Mr. Min Aung Hlaing told ASEAN leaders that he will find a way to solve the problem and agreed that violence must stop.

“Our proposals would be accepted, the general in his response did not reject [them],” Mr. Muhyiddin said, “This is very encouraging progress.”

When asked about Mr. Min Aung Hlaing’s response to the demand to cease the violence, Mr. Muhyiddin said that ASEAN leaders tried not to accuse his side too much because “we don’t care who’s causing it, we just stressed that the violence must stop.”

“For him, it’s the other side that’s causing the problems,” said Mr. Muhyiddin. “If that’s the case, we hope that he will find a way to stop it even before the ASEAN representatives go to Myanmar.”

Mr. Muhyiddin also denied allegations that ASEAN has not done enough to address the crisis.

“We are concerned about what’s happening and we’ve taken steps and made decisions,” he said. “The best thing is that there is a representative from Myanmar who says they are ready to accept our representative there.”

It was the first time Mr. Min Aung Hlaing traveled out of Myanmar since the coup, which was followed by the arrests of former civilian leader Aung San Suu Kyi and many other political leaders.

Critics have said ASEAN’s decision to meet the coup leader was unacceptable and amounted to legitimizing the overthrow and the deadly crackdown that followed. ASEAN states agreed to meet Mr. Min Aung Hlaing but did not treat or address him as Myanmar’s head of state in the summit, a Southeast Asian diplomat told The Associated Press on condition of anonymity for lack of authority to discuss the issue publicly.

The divergent ties of many of ASEAN members to either China or the United States, along with a bedrock policy of non-interference in each other’s affairs and deciding by consensus, has hobbled the bloc’s ability to rapidly deal with crises.

Amid Western pressure, however, the group has struggled to take a more forceful position on issues but has kept to its non-confrontational approach.

The London-based rights watchdog Amnesty International urged Indonesia and other ASEAN states ahead of the summit to investigate Mr. Min Aung Hlaing over “credible allegations of responsibility for crimes against humanity in Myanmar.” As a state party to a United Nations convention against torture, Indonesia has a legal obligation to prosecute or extradite a suspected perpetrator on its territory, it said.

The leaders of Thailand and the Philippines skipped the summit to deal with coronavirus outbreaks back home. Laos also canceled at the last minute. The face-to-face summit is the first by ASEAN leaders in more than a year.

Aside from Myanmar, the regional bloc is made up of Brunei, Cambodia, Indonesia, Laos, Malaysia, the Philippines, Singapore, Thailand, and Vietnam.

‘He has not bowed’: Jimmy Lai and Hong Kong’s future

As Myanmar protests continue, a glimmer of greater unity