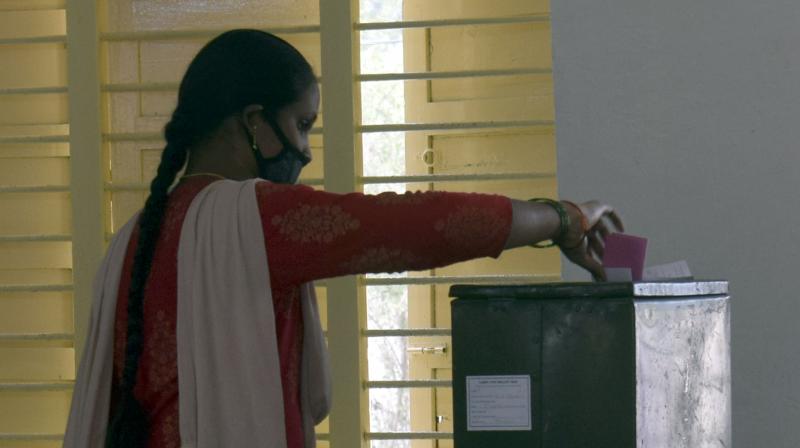 HYDERABAD: Serious doubts have risen over the conduct of the local body polls in Telangana, with State Election Commissioner C Parthasarathi currently being quarantined.

The Commission, it was exclusively learnt and confirmed by Deccan Chronicle, based on court directions, has sought the "opinion" of the state government on whether it should go ahead, or postpone, the polls.

Elections for two corporations and five municipalities were scheduled to be held on April 30.

For all practical purposes, the SEC being currently indisposed from performing his duties, being in quarantine, is leading to a gross compromise on the basic principle of free and fair polls.

Highly placed sources told Deccan Chronicle that the Commission has written to the State government, "seeking its views" on holding the elections in such an increasingly worsening pandemic.

Sources said that the SEC was reacting to a query on holding the polls from the Telangana High Court. “Though the SEC is all powerful to take decisions, the state government, in whose court the issue lands under the guise of consultation process, becomes the de-facto deciding authority,” sources pointed out.

While the second wave of Covid 19 showing a severe impact on the State, the government decided to conduct elections to Warangal and Khammam municipal corporations besides five other municipalities.

In a shocker to the opposition parties, in what has become a standard operating procedure, the SEC, the notification, the poll schedule, and the reservations to wards were all announced in quick succession on the same day. The opposition, by the modus operandi first unveiled in the GHMC elections, ends up having the have least possible time to pick candidates.

The SEC issued notification on April 16 and gave just two days time to parties to find candidates and have them file their nominations, an once of the practice perfected during the leadup to the Greater Hyderabad Municipal Corporation polls, which had also attracted severe criticism from the opposition parties.

“We are making a genuine and apolitical appeal to the SEC and government to postpone the municipal elections keeping in mind the dangerous situation prevailing in the state,” said N Uttam Kumar Reddy, Telangana Pradesh Congress Committee president.

The government itself admitted the grim situation and imposed night curfew in the state, he pointed out.

As widely reported in the media, the public meeting recently held by Chief Minister and TRS supremo K. Chandrasekhar Rao, as part of the campaigning for Nagarjunasagar bypoll, ended up being a possible Covid super-spreader. Besides Mr Chandrashekar Rao himself, several other participants at the meeting, including the TRS party candidate N. Bhagat and energy minister G. Jagadish Reddy were found to have tested positive soon after.

Elections and campaigning in parallel to the surge of a second wave of Covid has drawn widespread public consternation even as the courts are constantly pulling up the government over its actions to prevent further spread and managing the Coronavirus spread. In West Bengal, all major parties have now declared that they would not organise any public meetings.

"When Telangana is going through such a health crisis, what is the need to rush these elections for municipalities? Why risk the lives of lakhs of people at a time when long queues outside hospitals, testing centres, for oxygen cylinders, for remdesvir and other drugs and sadly, outside crematoriums? How can it come down to a choice of power over people?" said an official.