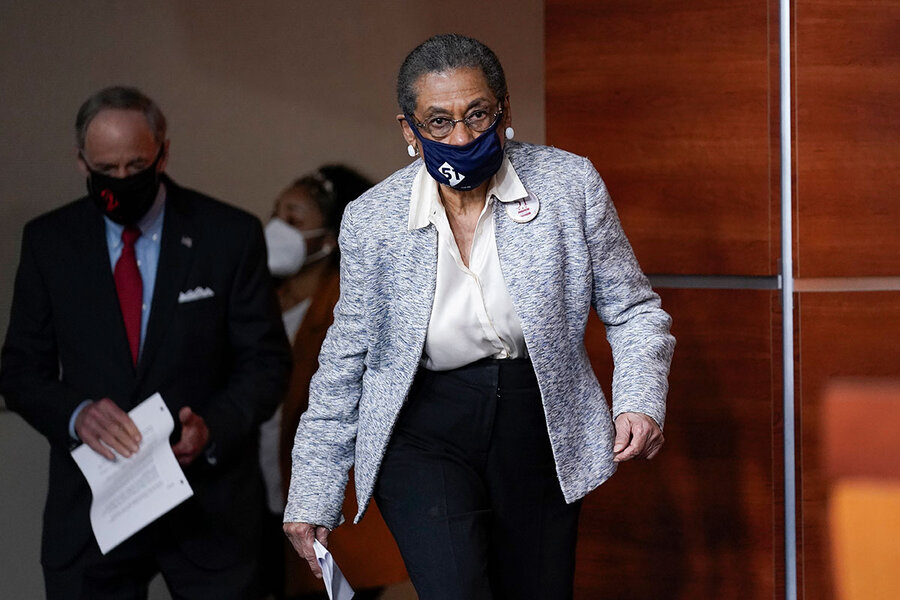 Eleanor Holmes Norton’s family has been fighting for equality since the 1800s, when her great-grandfather escaped slavery to come work in Washington, D.C., but – as she puts it – “didn’t quite find his freedom.”

She grew up in segregated neighborhoods, went on to Yale Law School, and has represented the District of Columbia in Congress for 30 years. Yet as a delegate, she has never been allowed to vote on a piece of legislation – not even her recent bill to grant the district statehood, which would give the district a representative with full voting rights and two senators.

“I have every reason to press for full equality for the residents of my hometown,” on both a personal and professional level, she said in a phone interview after the House of Representatives passed the bill, H.R. 51, by a vote of 216-208 on April 22.

Those pushing for statehood say it’s undemocratic for Washington, D.C., residents to have no voting members in Congress. Those opposed say statehood would be unconstitutional and is part of a partisan power play.

The push for Washington, D.C., to become its own state, with only a small enclave remaining a federal district, has waxed and waned over the years. In a partial nod toward the desire for representation, Congress granted the city three electoral votes through the 23rd Amendment in 1961.

But lately, the drive to achieve full statehood has been gathering new momentum. It won overwhelming approval from district voters in a 2016 referendum. And although the bill passed by the House has little chance of becoming law unless the Senate gets rid of the filibuster, Democrats are seizing on District of Columbia statehood as part of a broader push to adjust the balance of power in American government.

Specifically, Democrats see it as a way to address a demographic imbalance in the Senate, where Republicans make up half the members but represent 42 million fewer people than the Democrats plus two independents who caucus with them. Although the Framers designed the Senate to give each state equal influence – unlike the House, where representation is proportional to population – the growing correlation between partisanship and geography has meant that Republicans from rural, largely white states have gained outsize clout. Adding two senators from an urban Democratic stronghold like Washington, D.C., which voted 92% in favor of Joe Biden and has a far higher percentage of African Americans than any U.S. state, would help alleviate what they see as the Senate’s deeply undemocratic tilt.

“There’s a national political logic for [District of Columbia statehood], too, because the Senate has become the principal obstacle to social progress across a whole range of issues,” said Democratic Rep. Jamie Raskin of Maryland.

House Minority Leader Kevin McCarthy, a California Republican, cited Representative Raskin’s comment as evidence of a larger agenda behind the longtime push to give Washington, D.C., residents representation in Congress. “Make no mistake about it, H.R. 51 is just Democrats’ latest attempt at a power grab,” he said at an April 22 press conference.

If successful, he warned, Democrats could potentially pass “socialist” policies like the Green New Deal and defunding the police, as well as increase the number of justices on the Supreme Court to give it a more liberal tilt. “They are not even denying this is their objective.”

Why the Framers wanted a federal capital

With just over 700,000 residents, Washington, D.C., would be the third smallest state by population, after Wyoming and Vermont. But according to Representative Norton, it punches above its weight in other areas. Its residents pay more federal taxes per person than taxpayers in any other state, its gross domestic product is larger than that of 17 states, and its bond rating is higher than that of 32 states.

“Congress has both the moral obligation and the constitutional authority to pass H.R. 51,” said Representative Norton in her speech on the House floor ahead of last week’s vote.

The statehood bill is also seen by many advocates as a matter of racial justice and voting rights in a city that has an African American population of close to 50% – far higher than any state.

“Critics continue to ignore the essential argument in favor of statehood: ending the continued disenfranchisement of a non-minority Black jurisdiction that has left hundreds of thousands of Americans without representation in Congress,” wrote Adriel I. Cepeda Derieux, senior staff attorney for the American Civil Liberties Union’s Voting Rights Project, in an article last summer.

But conservatives say that carving a new state out of the District of Columbia would require a constitutional amendment.

True, Congress has admitted 37 other states, but none of them had a constitutionally mandated purpose to serve as a federal enclave. In the nation’s early days, Philadelphia served as the capital. When hundreds of angry soldiers surrounded the building where the Continental Congress met, demanding back pay, and Pennsylvania’s government refused to call in the militia to disperse them, the Congress decided a special federal district was needed to give it full authority over its own protection.

The Capitol experienced a reverse of the Philadelphia standoff on Jan. 6 this year, when President Donald Trump and Pentagon officials did not deploy National Guard troops for hours after rioters entered the building, while District of Columbia Mayor Muriel Bowser was powerless to activate them. Democrats have cited that clash as further justification for granting the district statehood, which Representative Norton says would give the district its own National Guard that could be called upon to protect the Capitol in addition to any federally deployed National Guard forces.

A second key reason for an independent federal district was to ensure that it was not beholden to any one state government in a way that would allow it to exercise “awe or influence” over the national government, as James Madison put it.

Article I, Section 8 of the Constitution gave Congress the power to establish a federal district that would not exceed 100 square miles. George Washington selected an area straddling the Potomac River, which marked the dividing line between Northern and Southern states, for that purpose in 1790. Both Virginia and Maryland ceded land for its creation, including the port cities of Alexandria and Georgetown, creating a 100-square-mile district that had fewer than 11,000 residents at the time. In the mid-1800s, Virginia took back its portion, which constituted about a third of the district’s land. Today the district comprises 68 square miles and has 712,000 residents.

An alternative way to give district residents full representation in Congress would be “retrocession” – giving the land back to Maryland, as was done with Virginia. But the constitutionality of Virginia’s retrocession has never been tested, and in 1963, Attorney General Robert F. Kennedy said that retroceding the land to Maryland would require a constitutional amendment. Such an amendment would require two-thirds majorities in the House and Senate, and three-quarters of states would have to ratify it.

Representative Norton says retrocession is a nonstarter, noting that Maryland’s full congressional delegation supports district statehood. Her bill outlines a 2-square-mile federal enclave that would encompass the White House, the Capitol, and the Supreme Court.

But with federal control limited to such a small area, Congress may not be able to exercise full authority over its security as intended, says Zack Smith, a legal fellow at the conservative Heritage Foundation. He adds that, according to his calculations, some of the security fence erected around the Capitol after Jan. 6 looks like it would have fallen outside the boundaries of the new enclave.

In addition, under the revised boundaries the district’s three electoral votes granted under the 23rd Amendment would likely be determined by only a handful of residents – such as those living at the White House.

H.R. 51 calls for repealing the 23rd Amendment, and essentially preventing it from being exercised in the interim, but Heritage’s Mr. Smith says that raises concerns about whether and when the amendment would actually be repealed and would lower the bar for annulling constitutional amendments.

“You would have a Congress trying to nullify a constitutional amendment by simple legislation. That would set a very troubling precedent,” he says.

“There’s certainly no doubt this is part of a larger push to fundamentally alter our system of government,” he adds, citing other Democratic initiatives being pushed on the left, like eliminating the filibuster and expanding the size of the Supreme Court.

Representative Norton welcomes the additional momentum her statehood push is getting as Democrats look to adjust the balance of power in the Senate. She says conservatives’ concerns about the 23rd Amendment not getting repealed first are groundless.

“It’s just another reason Republicans put forward to obstruct the bill,” she says.

The Oscars finale was a heartless disaster

Millennials are relocating, shifting US politics as they go