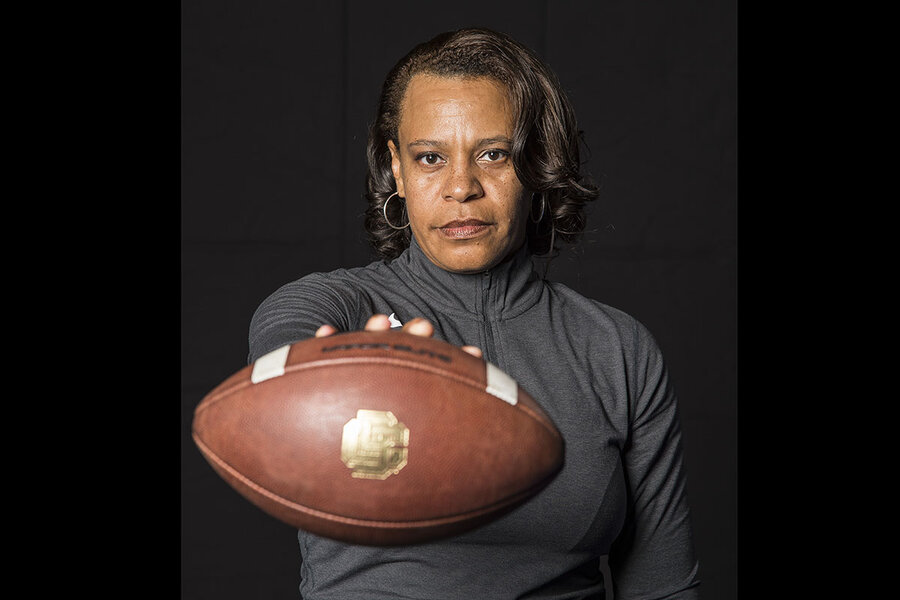 Increasingly these conversations are being led by female strength coaches like Ms. Fingers and Ms. Rankin. While largely unknown to sports fans, strength coaches are well known to those in a position to shine a brighter light on women’s athletics: male strength and conditioning coaches, athletic administrators, and college athletes.

The impact they’re having is both changing the perception of women’s college athletics and creating opportunities in top-level jobs that could affect the way we view women’s college sports.

Ms. Fingers has been breaking barriers throughout her career. Following a successful 15-year stint at the University of Maryland, Southern University hired her in 2012 as the first female head strength and conditioning coach for a Division I football program. Today she’s head strength coach at Bethune-Cookman University and recognized nationally by her peers as a role model for the next generation of strength coaches.

“When I started,” she says, “I was on an island by myself. I was a unicorn, and a lot of guys couldn’t handle it.” She was also hesitant to speak out because she was both the only woman and the only Black person on staff.

The NCAA Demographics Database bears that out. In 2012, there were 240 women with the title strength coach across Division I, II, and III schools. By 2020 that number had only grown to 397 across roughly 1,100 schools.

“These are strong people,” says Brian Gearity, director of the sport coaching master’s degree program at the University of Denver. “These women … are totally cognitively loaded, in ways that most strength coaches never have been.”

“It’s an evolution,” says Sandy Abney, chief science officer at the Collegiate Strength and Conditioning Coaches Association (CSCCa) and a former strength coach at the University of Texas.

That evolution has been apparent at the annual CSCCa women’s breakfast meeting. Ms. Fingers remembers when she first started attending in the mid-2000s.

Still, no one is Pollyannaish about the work that lies ahead. “We face lots of challenges,” says Sara Terrell, chair of the National Strength and Conditioning Association’s Women’s Committee and an associate professor of exercise science at Florida Southern College. “Women in [strength] roles have no room for error. They feel they must do more, work harder, and do better.” And while there are more jobs, she adds that many still go to men.

“We are going somewhere,” says Dr. Gearity, “but slower than it needs to be.” Though he admits the women’s basketball fiasco has called attention to the challenges facing women’s athletics and strength coaches, he worries about the staying power. “People will weather this social media storm,” he says, noting that more fundamental changes need to occur. “Budgets need to change, policies need to change.”

As important, he says, men need to change. “The issue has got to be for men to become more critical and aware of themselves,” he says. Men must be “committed to making organizations diverse and equitable.”

Beyond communication to connection

A couple hundred men had their eyes opened last spring after Ms. Fingers joined a Zoom call hosted by the African American Performance Coaches Association and its founder, SaJason Finley. It was meant to be a time to unite strength coaches as the pandemic was closing the country down. Ms. Fingers, however, felt left out. “We did a little closing prayer,” she says. “It was ‘men this,’ and ‘men that.’”

The email Mr. Finley got from her after the meeting changed his perspective, he says. The two talked the following week. “They’re going through twice as much as we go through,” Mr. Finley says. “We then brought those lessons before a couple hundred performance coaches. We just didn’t know the challenges these women were facing. She’s Mama Fingers to me now. [I’m] excited about how we’re moving forward.”

Ms. Rankin, from Eastern Connecticut State University, appreciates the positive momentum, too. However, “we need more women in charge of Tier I men’s sports,” she says. And we need “more women who are directors.” Currently she counts only about 30 female directors of strength and conditioning in Division I.

Institutional change is happening, though, and Arizona State University (ASU) is one of those leading the way.

Liane Blyn, a championship weightlifter, is director of sports performance and Olympic sports at ASU. Forty percent of her staff is female, something she credits the university for. “We have a great athletic director,” she says. “We have people who look at the future and want to lead.”

Bringing women on board has distinctive advantages, too, since a significant percentage of college athletes come from single-parent households.

“The majority of my players,” says Ms. Fingers, “were raised by a strong, Black female. … They get that I’m coming at them from a place of concern.”

Ms. Blyn agrees. “A lot of it comes down to ego,” she says. “Athletes are willing to trust a female when ego doesn’t get in the way. When you take interest in the athlete as a person and build that connection, that trumps communication. Connection is what I want for you,” she says. And that’s what many female trainers bring. Men tend to stress communication, and that, she explains, is about “what I want from you.”

Women’s collegiate athletics still have a long way to go before they’re accepted by the general public as on par with men’s athletics. Female athletic trainers, however, are playing a significant role in that transition.

For Ms. Fingers, it all comes back to having a voice. “If I don’t agree with something, I use my voice. The more we empower these younger women to use their voices, the more they will be listened to.”

This past March, the NCAA heard one of those voices loud and clear. This time, she wasn’t on an island as Ms. Fingers was 25 years ago. She had a growing force of female strength trainers behind her.

Why California’s governor is facing a recall vote. Three questions.