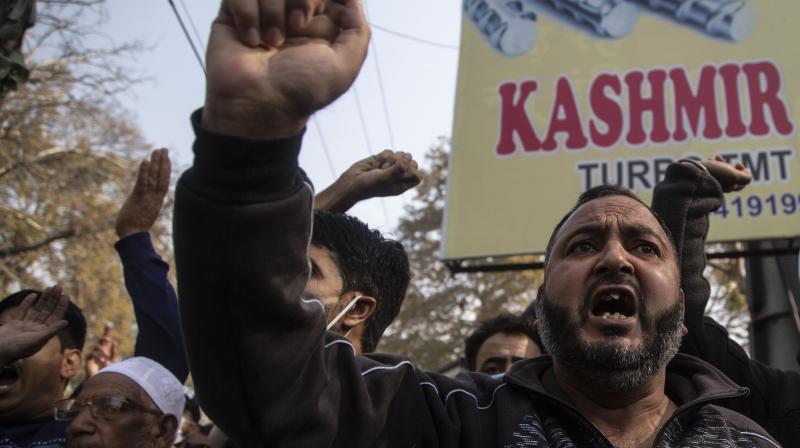 SRINAGAR: The Jammu and Kashmir government has constituted a Special Task Force (STF) for identifying and scrutinizing its employees involved in any activity detrimental to the security of the country or deemed as anti-national.

The Union Territory’s General Administration Department (GDA) has issued an order giving sanction for the constitution of a STF which would be authorised to identify and scrutinize cases of government employees found involved in such activity and refer these to the government for action against them in terms of provisions of Article 311(2)(c) of the Constitution of India.

Additional Director General of Police (CID) has been nominated as chairperson of the committee which will have Inspectors General of Police from Jammu and Kashmir Valley, representatives of Home, Law, Justice Member and Parliamentary Affairs and those of the concerned department of the employee under scrutiny as members.

"The terms of reference of the Special Task Force shall be to scrutinize cases of employees suspected of activities requiring action under Article 311(2)(c) of the Constitution of India”, the order says. The STF will, as per the order, engage with other members of the Terror Monitoring Group (TMG) for identifying such other employees, as necessary. It will also avail assistance of other law enforcing and intelligence agencies and departments, if warranted, towards completing probes in a time bound manner, the official sources said.

The GAD order reads that the STF “shall speedily scrutinize such cases in a time-bound manner and shall be serviced by the Criminal Investigation Department”.

The J&K government has, while pursuing a tough policy against what it sees as their anti-national activities and violation of Government Servants Conduct Rules, sacked a large number of its employees over a period of time. These rules lay down that no government servant shall take part in, subscribe in aid of, or assist in any way, any political movement in the country or relating to its affairs.

In October 2016, twelve government employees were fired on charges of being involved in anti-national activities which included fuelling the unrest in the erstwhile state after the killing of Hizb-ul-Mujahideen commander Burhan Muzaffar Wani. Some of the sacked officials were subsequently detained under J&K’s stringent Public Safety Act (PSA) which allows a person to be jailed for three months to two years without formal trial being initiated against him or her.

They were charged with “not only questioning the sovereignty and integrity of India but also violating the rules 14 and 20 of the Jammu and Kashmir Government Employees Conduct Rules, 1971”. However, the action against these employees had caused many raised eyebrows as it was taken without holding the mandatory inquiry into the charges levelled against them. The authorities had while defending it said that such an exercise was not possible “keeping in view the charged atmosphere and threat perception to witnesses.”

More employees faced the axe on similar charges and subsequently and, as per official sources, about one hundred government employees are currently being watched closely, and there could be more such sackings. Most of those under scrutiny are mid-level officers from different government departments including Education, Public Health Engineering, Food, Civil Supplies & Consumer Affairs, Revenue, Agriculture, Rural Development, Animal Husbandry, Accounts and Treasuries, Fisheries, Forest, Health and Fire and Emergency Services.

In 1990 when the Kashmiri separatist campaign became violent, the J&K government had sacked five of its senior officials after accusing them of being involved in anti-national activities and for taking pro-separatist stand. Among them was Naeem Akhtar, then a Deputy Commissioner in the Excise Department who had with others led a three-month-long strike by government employees in Kashmir Valley. After his superannuation, Akhtar joined People’s Democratic Party (PDP) and served as a minister both in PDP-Congress and PDP-BJP coalition governments later. He is currently under detention for being vociferous in his anti-government views.

Earlier in 1986, the then Governor Jagmohan Malhotra had also sacked a number of government officials on being anti-national and one of them, a teacher, later came to be known as prominent separatist leader Prof. Abdul Gani Butt.

Time for Bandi to bite the bullet against old guard dissent