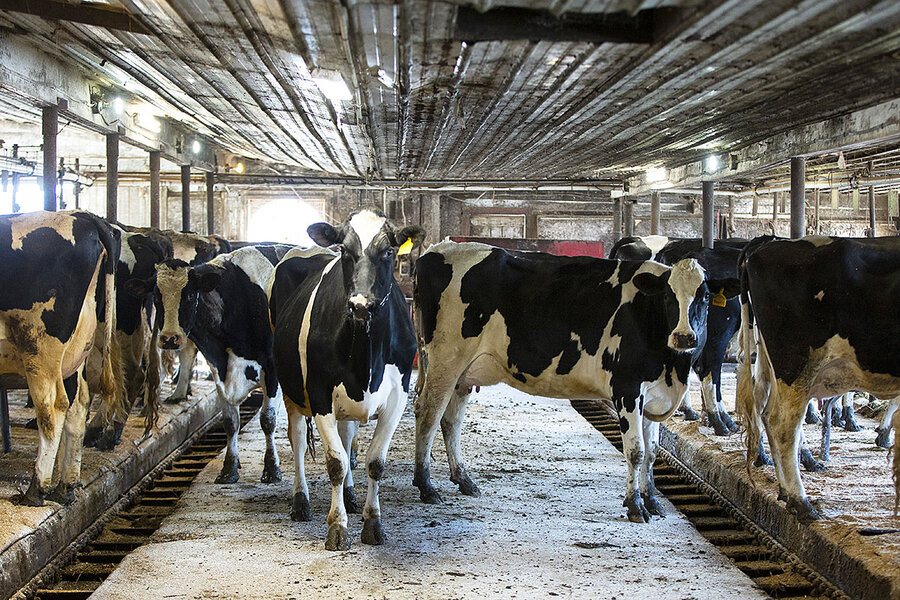 Rick Osofsky walks up to his cows grazing peacefully in the lush field next to the milking barn. He strokes their heads affectionately. This one’s Bella. That one’s Lemon Drop. He knows almost all of his cows by name – and there are around 200 of them.

On the other side of the farm, refrigerated trucks idle outside the manufacturing facilities, where milk is bottled or cultured for yogurt. Farmhands load up the trucks with plastic-wrapped boxes of yogurt, ready to be driven across the country to states as far as California.

It has been a little over a year since the pandemic began, and Ronnybrook Farm Dairy in Ancramdale, New York – against all expectations – is doing better than ever.

When the pandemic struck, a rise in hunger was matched by a surge in farms that lost much of their normal demand. Here’s how one effort to get food where it’s needed may have enduring benefits. Fourth in a series on hunger in America.

Mr. Osofsky is a third-generation farmer and co-owner of Ronnybrook, which has been in his family for 80 years. When the pandemic hit last March, they were anticipating the worst. In New York, schools and other food services, which had constituted about 35% of their sales, had been ordered to close. It had already been hard enough surviving as a small dairy farm due to falling milk prices – across the United States, more than half of licensed dairy farms have disappeared since 2003. And in his own neighborhood, Mr. Osofsky says there were just two of them left, down from about 30 in the 1980s.

Right when farmers were taking a hit, the pandemic was also causing a jump in food insecurity as workers lost jobs and income – and those school closures cast doubt on children’s access to school lunches.

But last April, New York state launched an initiative to connect those dots, linking farmers with food banks, and an infusion of state money to address those twin problems. Some $35 million from the state last year and an additional $25 million this year have helped food banks buy produce from farms including Ronnybrook, and then distribute it to food pantries that serve households in need.

Even in normal times, food banks and pantries face the challenge of being under-resourced. Yet David Just, an agricultural economist at Cornell University, says farm-to-pantry programs like this one and a comparable federal effort called Food Box have been especially helpful during the pandemic.

“Most of the food banks that I’ve talked to say, ‘It’s USDA that saved the day because we could use the cash to order food,’” says Dr. Just, who is currently researching the role of food banks during the pandemic.

Across the U.S., large food banks were distributing 80% more food in spring 2020 than they had been a year before. In New York City, some food banks saw dramatic increases as high as 200%.

That’s not to say the pandemic efforts functioned flawlessly. The U.S. Department of Agriculture (USDA) Food Box program had enough logistical challenges that it’s not being renewed.

But the program called Nourish New York, launched by Democratic Gov. Andrew Cuomo, is seen as having a compelling rationale.

“We have so much food, and no one should be hungry,” Mr. Osofsky says. At his farm, ultimately “instead of having a year where we thought it would be our worst, we had our best.”

Around the nation, nonprofits and governments saw similar opportunities to match unsold crops with people who needed them.

The Nourish program is distinctive as a state-level effort that is poised to continue. Last month, lawmakers in Albany signed a bipartisan bill to make Nourish New York permanent – with the goal of bringing lasting value at a time when food banks say they need support to help the many people who continue to face food insecurity.

“We never had to close”

In New York, what appeared to come together in about a month was really the culmination of years of work, says New York Agriculture Commissioner Richard Ball. Nourish built on other hunger initiatives the state agriculture department had already been running.

For one food bank, Long Island Cares, food distribution almost doubled, from an average of 10 million pounds a year pre-pandemic to about 18 million pounds in 2020. Nourish made it easier to get food, says chief operations officer Peter Braglia.

At one of their food pantries in Freeport on Long Island, program coordinator Mercedes Montero greets clients warmly through a counter window as they enter the modest pantry to pick up pre-packed bags of food on a recent Thursday morning. Some are familiar faces, she says, while others were first-time clients. It was a quieter morning than usual; as businesses slowly reopen across the state, the number of people coming by has been decreasing.

But even at the height of the pandemic, the pantry was able to cope. In March last year, it was serving an average of about 1,000 people a month. By May, that number had hit 3,000. Deliveries increased in frequency and there were days when the freezer would be packed to the brim with frozen meat.

“Thankfully, we always had enough,” says Ms. Montero. “We never had to close.”

The funding from Nourish also allowed food banks to be able to buy more easily from smaller farms while supporting New York food producers. According to a 2019 agriculture state report, small farms make up almost three-quarters of all farms in New York, but accounted for just over 4% of all sales. Large farms – less than 3% – generated over 60% of all sales.

Mr. Braglia says most food banks try their best to buy local as much as possible, but the priority tends to be on getting “the most value for their dollar” because of limited resources. And economies of scale meant it is usually more cost-efficient to buy from larger farms and producers, who weren’t always local.

With Nourish, however, the condition was to “keep it local.” And that’s how Mr. Braglia met Julia Van Loon, the owner of Slate Foods, a consortium of small beef producers in New York.

When schools were ordered to close, Ms. Van Loon’s first thought had been for the students and teachers in the 47 school districts she had been working with through a farm-to-school program. Then her next thought was the 170,000 pounds of beef sitting in a freezer in a warehouse on Long Island. What was she going to do with all that unsold beef? She remembers turning to her husband, asking, “Is this how it ends?”

But within a week of the launch of Nourish, Ms. Van Loon heard from Mr. Braglia at Long Island Cares. By mid-May, she had found a new home for her 170,000 pounds of beef. She was also able to keep her farmers and her business going – while knowing her food was going to a worthy cause.

The Nourish program has created an infrastructure to help bring down transaction costs – a benefit normally associated with scale – and has made the market more inclusive, says Dr. Just. Although government resources will still be needed, “that’s something that could be durable and long lasting, and it creates value … [that can be] potentially self-sustaining,” he says.

Programs like Nourish aren’t a one-step fix for food insecurity. And participants say there is room for improvement, such as timelier deliveries and reducing backlog.

But they say Nourish has helped build a more resilient regional food system – food banks, distributors, and farms now have new networks they can tap into. And if another crisis comes their way, they are better prepared.

“Hopefully from there, we can unite as a food bank association, maybe do some group purchasing from some of these smaller [farms], give them another outlet. I don’t believe a lot of these farms that we were exposed to had a relationship with any food banks before,” says Mr. Braglia.

One of those new ties is with Ms. Van Loon, whose beef consortium is just a phone call away. “I have all these new relationships I’ve never had before,” she says. “It’s created a new sense of community, which has been missing for a while now.”

Women strength coaches do the heavy lifting for women’s athletics