Hello everyone, some time ago I collected a simple scheme one switch – two lamps as an alternative to a simple Chinese chandelier controller, which had its own consumption of about 15 Tue!
I found this diagram on the radio CAT forum, the archive will contain a diagram from the original source.
Experimenting with this scheme, the following idea occurred to me … Is it possible to stepwise control the lighting of one LED lamp?
Something like this:
1 – turned it on and the lamp shines at 40% of the power.
2 – turned it off and quickly turned it on and the lamp shines with rated power
3 – turned it off, waited 3-4 seconds, turned it on again and the lamp glowed at 40%.
I will plant for what I needed all this “nonsense”:
I can't watch TV in the evening in complete darkness, my eyes get tired. I need a little backlight and don't have a good dimmable chandelier. And the usual budget chandelier for lamps with an E27 socket. This circuit can just make me a backlight for comfortable viewing of TV without adding wires to the chandelier and do not buy a chandelier with smooth adjustment.
This is my opinion and I do not impose it on anyone! I'm just sharing the result of my next homemade product … The diagram, drawing of the printed circuit board and my thoughts on assembly will be on link on Yandex disk .
After dancing with a soldering iron around this circuits and LED lamps turned out to be such a symbiosis. 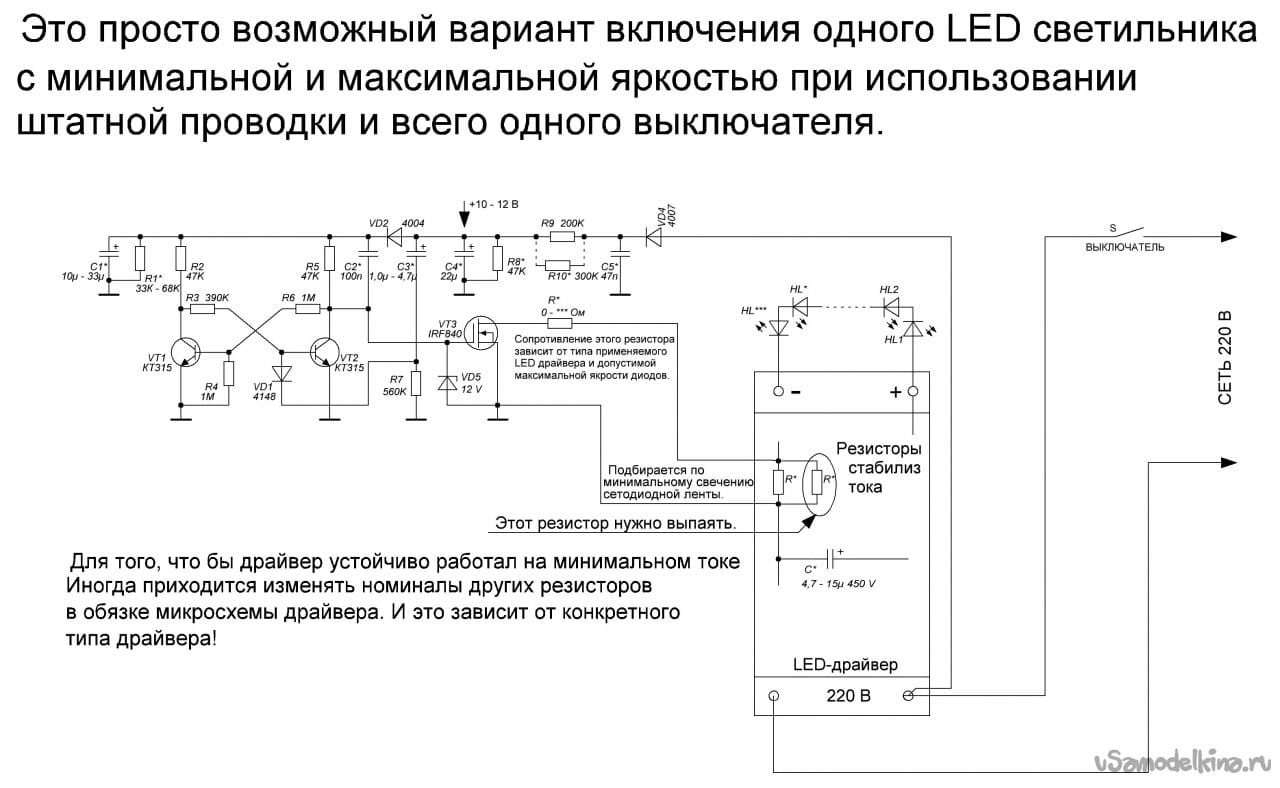 Yes, it was easier to buy a Chinese controller and not engage in this perversion, I know that. But why buy something that you can do yourself from the existing radio junk?
Do not forget that all elements of this circuit are not galvanically isolated from the mains. Observe safety precautions when switching on and configuring this circuit for the first time !!! It is advisable to turn on and set up for the first time with a 220 V 95 W incandescent lamp turned on, breaking the mains wire as a fuse! If an installation error is made or snot remains on the board, then this lamp will glow happily !!! With one 10 W LED lamp connected to this switch as a load, the 95 W incandescent safety lamp should not glow at all in any mode!
The intrinsic current consumption is approximately 2 mA from the mains, which is approximately 0.5 W.
< a href = "https://usamodelkina.ru/uploads/posts/2021-04/1619526920_potrebljamyj-tok-jetoj-shemy.jpg" rel = "prettyPhoto"> 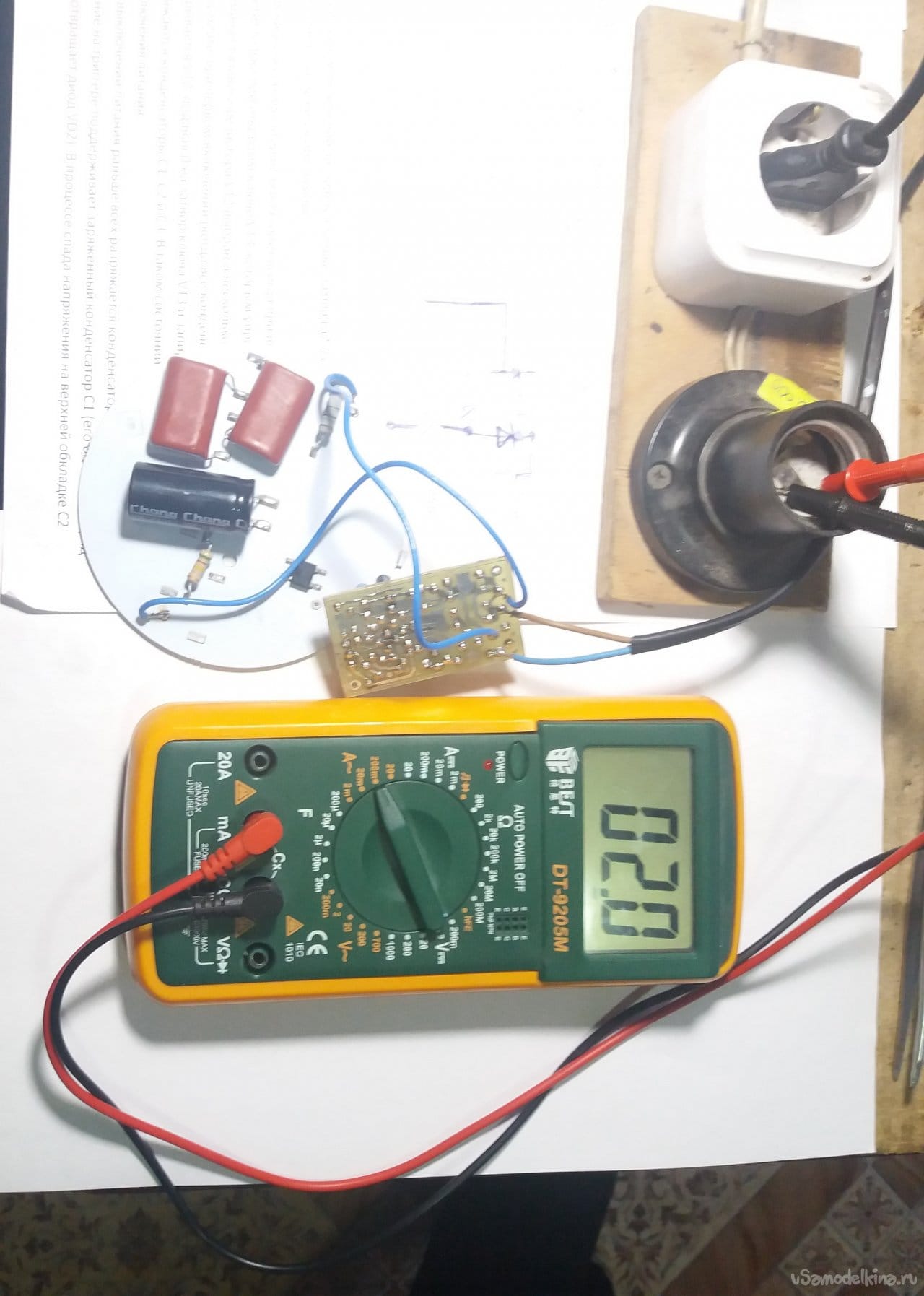 I think this is such a small current that in fact it can be neglected. Moreover, the current is not consumed in the off state.
Works like this:
When the LED is turned on for the first time, the lamp glows at 40% of the rated power, because the driver current stabilizer resistor is pre-selected for a power of only 40% (this depends on specific desires) and the field-effect transistor is closed. Further, the alternating mains voltage is rectified by the VD4 diode and drops across the damping resistors R9-R10 to 11-12V. Capacitor C4 smooths out the rectified voltage. The base resistor VT2 is selected several times less than the base resistor VT1.
Therefore, at the moment of the first turn-on, the capacitor C3 is discharged and the transistor VT2 opens first, connecting the gate of the transistor VT3 with a minus, thereby reliably closing it. Capacitors C1, C3 are charged. In this state, the circuit (trigger) will remain until the power is turned off by the switch S. When the switch S1 is quickly turned off-on, the operation of the circuit is maintained for several seconds by the charged capacitor C1, the capacitor C3 will be discharged and charged, and as a result, the pulse from the capacitor through the diode VD1 will switch the trigger , the transistor VT2 will close and open the field-effect transistor VT3. Which bypasses the current-limiting resistor of the LED driver with its low resistance of the open channel (on average, the resistance of the IRF840 open channel is less than 1 Ohm). As a result of this, the LED lamp will glow with a nominal brightness. (Selected experimentally by the resistor R * in the source circuit of the transistor VT3, so as not to exceed the reasonable current and temperature of the LEDs).

In order to switch back to a lower brightness (in my case, 40%), you need to turn off the S1 switch and wait 3-4 seconds until the capacitor C1 is discharged. When you turn it on again after a pause, the LED lamp will glow with reduced brightness until the next off-on switch S1.
Setting:
If the parts are in good condition, correct installation and there are no snot on the tracks, the circuit starts work after the first start.
Select the resistance of the damping resistors R9 – R10, so that the terminals of the capacitor C4 would be 11 – 12 V.
You may need to select the switching time from the nominal brightness to the minimum. (This may depend on the type of parts used.)
This is capacity of capacitors C1, C4 and resistors R1, R8. The more their capacitance and resistance, the more time you need to keep the switch S off to switch the lamp from a bright glow to a dim one.
From my personal experience, the optimal time is 3-4 seconds. You shouldn't do less, you may not have time to quickly click the switch to switch to maximum brightness.
During operation, one nuance was discovered, when turned off from the “dim” mode, the LED lamp flashes for a split second at almost full brightness and turns off. I think this can be corrected if parallel to the high-voltage electrolytic capacitor in the 400 V driver set the discharging resistance kiloOhm to 60-80 …
Details:
Resistors:
R1 – R8 corresponding to the denominations according to the scheme, SMD format 1206.
R9-R10 200 kOhm, 2 W. Preferably imported, they are more compact than our MLT, I drew the board for imported ones.
Resistor R * is needed to set the nominal !!! current of the LEDs of the used LED lamp, so as not to exceed the reasonable current and heating of the LEDs in the lamp!
On the board, I added a 2.2 Ohm 1 W resistor as a fuse (for fanaticism) after the VD4 diode.
Diodes:
Any low-power VD1 with a current of 100 mA, in a DO-35 package, such as IN4148.
VD2, VD4 any with current from 0.5 A and reverse voltage from 400 V, in SMD package DO-214, for example 1N4007.
VD5 any zener diode with power from 0.5 W with stabilization voltage 13-15 V. For example BZX55C15 … Protects the gate of the field-effect transistor!
Capacitors:
C1, C3 electrolytic small-sized, corresponding ratings according to a circuit with a voltage of at least 16 V, for example K50-35.
C2 100 n ceramic with voltage from 25 V, SMD standard size 1206.
С5 47 n voltage not lower than 400 V, for example К73-17.
Transistors:
VT1 – VT2 any low-power structures npn. For example BC547 in SMD package SO-23.
VT3 is a high-voltage field-effect N-chennal transistor with a maximum voltage of 400 V Stoke-Source and a current of 2 A. For example, IRF740, IRF840 in TO-220 package.
In conclusion, I would like to say that this scheme works for me in different versions, as the brightness of one lamp is regulated, and an additional lamp is connected for more illumination, as in the original source.
So far, the flight is normal.

We measure high voltage with a multimeter

A simple template for milling corners with your own hands

How to make a simple balloon incubator