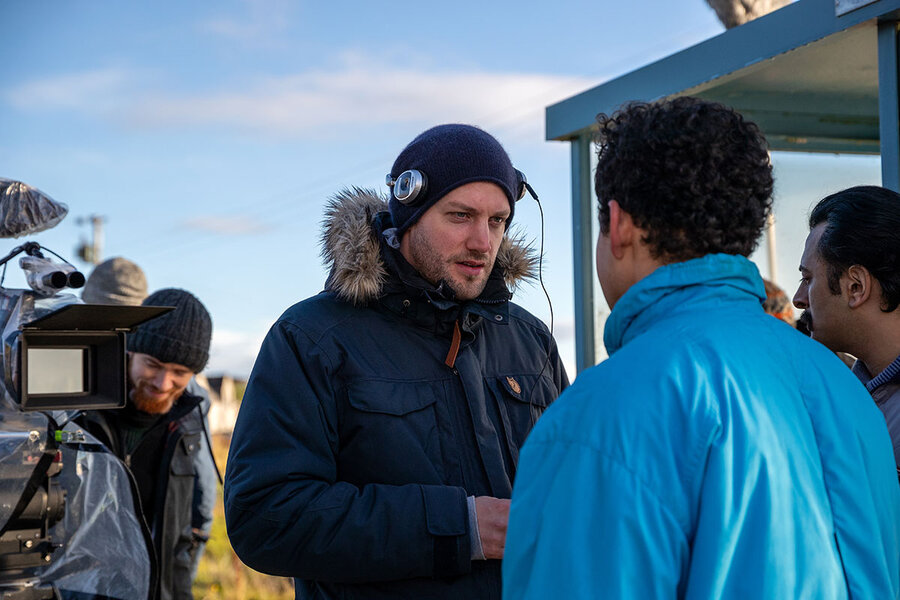 Q: Why is this story about refugee experiences so important to you?

It reached back to my time living in Syria and reflecting on the relationships – the friendships that I made there, and then seeing people that I met who’ve since become refugees, and also others that I’ve lost touch with. The representation of refugees in the media really stood out to me. That’s also connected to my undergraduate degree in Arabic and politics. You’re studying the construction of “the other” … and I then went into studying the representation of Arabs and Muslims in American cinema and TV.

Q: When it comes to building bridges across cultural divides, can you speak about the power of story and cinema?

A lot of films use this approach where they use a Western character as a vehicle to tell a story about the other. We often get this sort of cultural reconciliation narrative where we have these two cultures clashing and then, by the end, everyone’s best friends and really understanding of each other. It feels like a cinema trope. I was really interested in interrogating that as an idea and putting the refugee characters front and center. Cinema in general has always been a very powerful tool to create change and to cause people to think differently.

Q: How did you endeavor to help audiences see themselves in these characters?

I wanted to make a film about the refugee crisis, without making a film about the refugee crisis. Omar is struggling with this grief for the loss of his identity – or what he regards as the loss of his identity. It’s about his relationship with his family back home and the relationships that he forms on the island itself. The themes that are explored around identity are universally relatable. We all, at some point, will go through some sort of identity crisis. Everyone changes their identity across the course of their lives in one way or another, just even from losing a job or retiring. There’s a universality in Omar’s journey to coming to terms with his circumstances and with his identity, and then also with his ambitions and his hopes for the future.

We were very deliberate in terms of how he was [filmed], as well as having the characters looking just beyond the lens. It creates a different connection with the audience in the cinema because we’re not shooting the characters from a three-quarter angle. The characters are almost looking directly at us all the time. It’s almost like those conversations are being had directly between us and the characters on screen.

Q: When you were writing the story, you became particularly close to one Iraqi Kurdish asylum-seeker. How did his story influence the film?

He was waiting for his asylum claim to come through for six years. He actually became homeless for a period of time. Speaking to him, what was really central to his journey and experience was losing his sense of identity.

He has a great sense of humor and he loves to laugh. And, like many of the people that I spoke to along the way, they really liked the idea of using humor in the film and for the film not to be this kind of forlorn human drama that we’re used to seeing.

Q: Have you had any responses to the movie that stood out to you?

In a Zurich film festival, at the Q&A afterwards, someone stood up and he was in tears. He said, “Thank you so much for making this film. This is my life. This is my experience. I arrived here 20 years ago. I lived this.” He could barely talk through the emotion. The whole cinema just went silent. Everyone was fighting back the tears in that moment. There’s just been really positive feedback.

This interview has been edited for length and clarity.