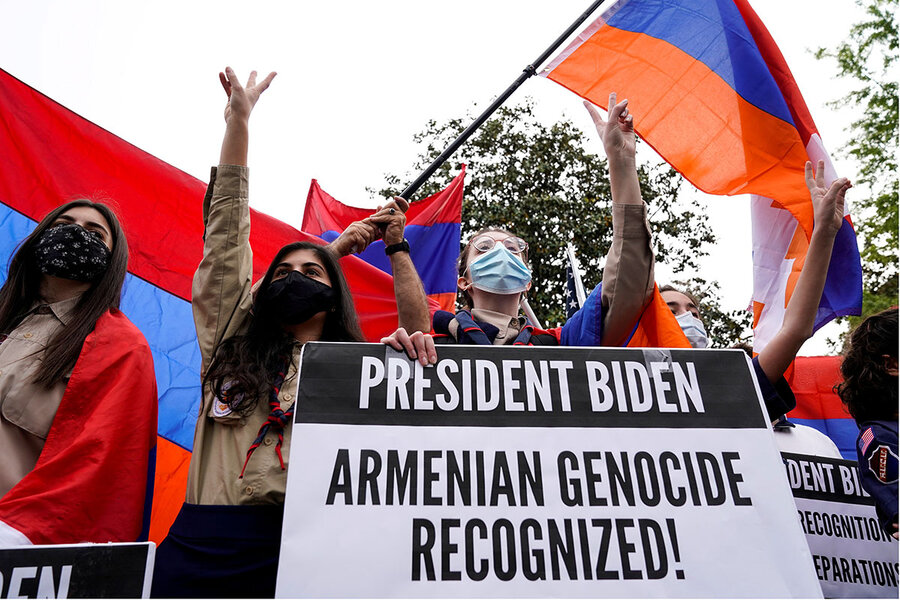 The actions range from former President Donald Trump’s recognition of Jerusalem as Israel’s capital to President Biden’s use of the G-word, and from his overruling of the Pentagon to order all U.S. troops out of Afghanistan to even his labeling of Russian President Vladimir Putin as a “killer.” All suggest truth-telling and debate-ending decisiveness are increasingly carrying the day over long-held shibboleths and diplomatic hand-wringing.

For Mr. Biden, the willingness to risk the wrath of NATO ally Turkey and declare as genocide the slaughter of as many as 1.5 million Armenians at the hands of the Turkish state’s predecessor also suggests a determination to put meat on the bones of what he says will be a values-driven foreign policy with human rights as a central priority.

The president made no mention of modern Turkey in his statement Saturday. Still, many analysts saw the move as a signal to the world and to Turkish President Recep Tayyip Erdoğan specifically that human rights abuses and authoritarian slides by foes and allies alike are not going to be overlooked.

But for some diplomats and foreign policy experts, what both Mr. Biden’s actions and some of Mr. Trump’s Middle East moves suggest is something else: a desire to move the same old time-consuming foreign policy debates off the table to concentrate on a few core issues.

“With this Armenian genocide declaration and the Afghanistan decision and a few other things, Biden is saying he really does want to skinny down and clear the decks to focus on the big things – climate change, COVID, democracy, China, and Russia,” says James Jeffrey, a longtime diplomat and former special envoy to the Coalition to Defeat ISIS who now chairs the Wilson Center’s Middle East program in Washington.

“In the post-Cold War years the U.S. could just dance around a lot of these little things and never make decisions,” he adds. “But with both Trump and now Biden there is a shift to recognize the reality of a situation, end the debate with a decision, and move on to what’s really important.”

He notes that as President Barack Obama’s ambassador to Turkey, he was privy to the months of debate the former president entertained on the question of whether or not to finally label a “genocide” the atrocities committed against the Armenians.

“As vice president, Biden was there to see how these endless and repetitive debates on everything under the sun by all the top policy makers consumed so much time and attention yet often resolved nothing,” he says. “So Biden wants to avoid that by moving some of the small stuff off the table so he can prioritize what he’s decided really matters.”

And Ambassador Jeffrey says he saw a similar motivation behind some of President Trump’s Middle East actions. “Recognizing Jerusalem as Israel’s capital, but also what he decided about the Golan Heights and the Western Sahara – these are all things that we debated about constantly even though we knew what the reality was.”

After announcing his Jerusalem decision with great fanfare in December 2017, Mr. Trump went on to recognize the occupied Golan Heights as Israeli territory in 2019. Then just before leaving office, he recognized Moroccan sovereignty over the disputed Western Sahara territory.

Still, for some experts the human rights overtones of the Armenian genocide question were at least as important as other motivations Mr. Biden might have had.

Having placed human rights at the center of his foreign policy – and having already deemed China’s treatment of its minority Uyghur population “genocide” – Mr. Biden seemed unlikely to follow in the footsteps of several past presidents who as candidates had promised to describe the World War I-era atrocities against Armenians as genocide, only to back down once in office.

Indeed for some foreign policy experts, the president’s action was at least as much about China as it was about Turkey.

“Yes, Biden was sending a signal to Erdoğan about his anti-democratic actions and growing human rights abuses, but it was also a signal to Russia and what Putin is doing, and perhaps most important of all, to China about its treatment of the Uyghurs,” says Matthew Schmidt, associate professor of national security and political science at the University of New Haven in Connecticut.

“In the case of Turkey, Biden is recognizing a century-old genocide, but in China’s case it’s an active genocide happening before our very eyes,” he adds. “So the more important aspect of calling out the Armenian genocide is not really Turkey, it’s China.”

Like Ambassador Jeffrey, Dr. Schmidt sees a certain determination to “call out things for what they are” in Mr. Biden’s Armenian genocide statement and his willingness to call out human rights abusers more broadly. But beyond simply truth-telling, he sees the president moving to implement what Dr. Schmidt says is the Democratic Party’s “vision of national security that says, the more democracies and the more respect for human rights in the world, the safer America is and the stronger its position in the world.”

Indeed, he sees the influence of Samantha Power, Mr. Biden’s nominee to run the United States Agency for International Development and a longtime Democratic human rights advocate, behind the president’s human rights focus and his willingness to use the word “genocide.”

He notes that Ambassador Power “pushed hard” in the early 1990s for steps to head off the ethnic violence that became the Rwanda genocide, and considered the Clinton administration’s inaction “a shameful blunder.”

“She continued in the Obama administration to promote the idea that getting involved in human rights and calling out abuses is in our interest,” Dr. Schmidt says, “even if sometimes it’s the hard thing to do.”

Which is not to say that President Biden tossed all diplomatic niceties to the wind with his Armenian genocide statement.

Soner Cagaptay, an expert in U.S.-Turkish relations at the Washington Institute for Near East Policy, noted on Twitter shortly after the statement was issued that the diplomats who wrote it showed a “mastery” of Turkish politics and history – attributing the genocide to the Ottoman Empire, never once mentioning Turkey, and even referencing Constantinople, the Ottoman capital that is present-day Istanbul.

Moreover, Mr. Biden had even telephoned Mr. Erdoğan the day before issuing the statement to forewarn him that it was coming.

One question now is whether the president has taken all his major get-real-and-move-on actions with the Armenian genocide and Afghanistan withdrawal decisions, or if there are more to come.

Ambassador Jeffrey says he anticipates at least one more high-profile shoe to drop: He predicts the U.S. will be back in the Iran nuclear deal, formally known as the Joint Comprehensive Plan of Action, by the end of May.

“Biden wants to get the JCPOA out of the way, otherwise it drives the whole government and, like these other irritants, takes all the administration’s bandwidth,” Ambassador Jeffrey says. “He knows the JCPOA is only good for five or six years,” he adds, “but it’s five or six critical years he wants to be focusing on these other existential threats.”

US to send COVID-19 supplies worth $100 million to India

America’s police no longer get the benefit of the doubt