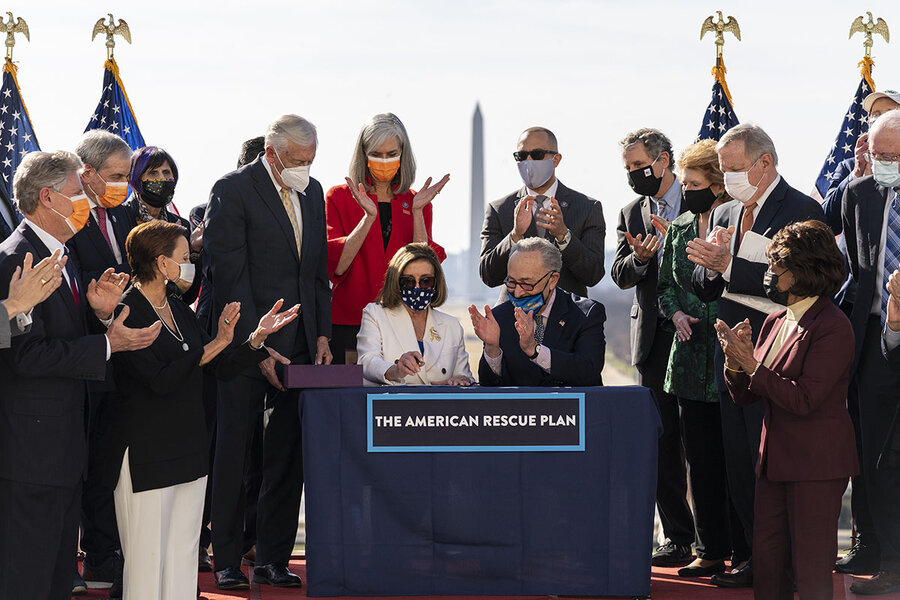 The last time Joe Biden gave a big speech on Capitol Hill, moderate Republican lawmakers were buoyed by what they heard. The newly sworn-in president might be a Democrat, but he had spent 36 years in the Senate. He understood Congress and how deals were done. On that blustery January day, as their former colleague talked of unity, hopes for bipartisan cooperation soared.

Tonight, as President Biden marks nearly 100 days in office with an address to a joint session of Congress, many Republicans are far more wary. Some say they feel rebuffed – or worse, like they’ve been used as window dressing for a White House that has no genuine interest in bipartisanship.

“The administration should be on notice that the Lucy-and-the-football play can’t be run too many more times until people stop playing football with the administration,” says Sen. Todd Young of Indiana, one of 10 GOP moderates courted by the White House.

Can a bill be bipartisan if it passes with only Democratic votes? The Biden administration says yes, if it includes GOP ideas and Republican voters support it. Republicans say the White House is courting a backlash.

Mr. Biden’s campaign promise to be a president for all Americans – one who wanted results, not a revolution – set him apart from primary rivals like Sens. Bernie Sanders of Vermont and Elizabeth Warren of Massachusetts. He was Uncle Joe, the genial dealmaker who would turn down the temperature in Washington and temper the policy ambitions of the progressive left.

But in his first three months in office, he has been pushing through an ambitious agenda that expands the reach of government on everything from manufacturing to health insurance – so far without any Republican votes. “All of the sudden he’s trying to outdo FDR and LBJ combined,” says one GOP Senate aide, speaking on background.

The White House has called this approach “bipartisan” because it has incorporated some Republican ideas and garnered the support of some Republican voters, mayors, and governors.

“Bipartisanship is not determined by a single ZIP code in Washington, D.C.,” White House press secretary Jen Psaki said at a briefing last month. “It’s about where the American people sit and stand.”

Allies on the left are championing this redefinition of bipartisanship as a breakthrough. They say it will allow them to finally get things done for the American people and not be held hostage by GOP senators demanding compromise before they will sign onto legislation – something Democrats contend led to many “Lucy-and-the-football” moments for their side during the Obama years. Under this concept of “Main Street bipartisanship,” the White House points to polls showing the general popularity of the $1.9 trillion COVID-19 relief bill, which gave most Americans a $1,400 stimulus check and infused state and local governments with funding after a rough year.

“We consider that a huge framing victory,” says Adam Green, co-founder of the Progressive Change Campaign Committee, which has advanced the concept of Main Street bipartisanship. “It takes away all the leverage that [Senate Minority Leader] Mitch McConnell has.”

But Republicans warn that Democrats are misreading the broader political environment, and say that if the White House continues to shut GOP lawmakers out, they could be courting a backlash in the 2022 midterms. GOP pollster Bill McInturff has found that Republican antipathy toward Mr. Biden is nearly equivalent to that of Democratic voters toward former President Donald Trump at about this time in his presidency. The difference – for now at least – is independent voters, who view Mr. Biden more favorably than they did Mr. Trump.

Political realities in Congress may also impel a change in approach. With the COVID-19 relief bill, Mr. Biden and his Senate allies relied on a fast-track mechanism that allows Democrats to pass budget-related bills with only a simple majority rather than the usual 60-vote threshold. But it can only be used a handful of times.

“They have the votes and so therefore they didn’t need us,” says Sen. Bill Cassidy of Louisiana, who called Mr. Biden’s efforts at bipartisanship on COVID-19 relief “totally insincere.”

“I think if they need votes, they’ll be sincere.”

Senators Cassidy and Young were among 10 Republicans whom President Biden invited to the White House for what the senators thought would be earnest negotiations. They felt the president genuinely listened to their ideas, and said he seemed receptive toward their proposal for a $618 billion package that focused more narrowly on specific forms of COVID-19 relief, including funding for testing and vaccination, and limited stimulus payments to people in a slightly lower income range.

The very next day, Democrats announced they would be proceeding with their $1.9 trillion bill through the fast-track process, known as budget reconciliation. They wouldn’t need a single GOP vote.

“There was no genuine outreach or working together. It discourages a lot of us because we want to work with them,” says Sen. Rob Portman of Ohio, who was part of the meeting.

While he says it was “courageous” of Mr. Biden to run a primary campaign on promises of working with Republicans and Democrats alike and getting back to a truly bipartisan style of governing, he adds, “We just haven’t seen it yet.”

Last week, the Democratic National Committee pointed to a poll showing that 70% of Americans support the American Rescue Plan, including 48% of Republicans and 73% of independents, though other polls have shown considerably lower support. GOP mayors from Arizona to Michigan also welcomed the initiative. Not one of the Senate’s 50 Republicans – whom Democrats have criticized as obstructionist at a time of urgent need amid a pandemic and related economic downturn – voted for the COVID-19 relief bill.

Senate Democrats say the COVID-19 bill actually included elements proposed by Republicans, such as Mississippi Sen. Roger Wicker’s Restaurant Revitalization Fund, and is popular with many Republicans across the country. If Republican senators as a whole ultimately decided not to support the bill, that was a political calculation, says Democratic Sen. Tim Kaine of Virginia.

“If the content includes significant chunks of legislation that were bipartisan; if it’s popular with Republicans; if Republican stakeholders, mayors, and governors, U.S. Chamber of Commerce like it – then, yeah, I think it is bipartisan,” says Senator Kaine. “I don’t think Biden gets held responsible for [Republicans’] strategic call” to oppose it.

Now Mr. Biden has unveiled a $2.2 trillion infrastructure and jobs plan, which Republicans have panned as another liberal wish list since only about 15% of it would go toward traditional forms of infrastructure like roads, bridges, ports, and water systems. Tonight, he is expected to unveil a $1.8 trillion American Families Plan.

When asked earlier this month if he will have failed on his promise of bipartisanship if he can’t get Republicans on board with his infrastructure plan, Mr. Biden reiterated that he was willing to work with them. As evidence, he pointed to his meeting with the 10 GOP senators on the COVID-19 bill, saying he would have been willing to arrive at a compromise but that the senators proposing a more modest package “didn’t move an inch. Not an inch.”

The comment – made publicly, by the president himself – stung.

“It’s like someone spitting in your face and then telling the world that it rained on you,” says another GOP Senate aide, speaking on background.

Glimmers of cooperation, on some issues

To be sure, not all hope is lost for bipartisan cooperation. Both Mr. Biden and Senate Republicans continue to voice support for the idea, and bipartisan discussions are taking place on guns and infrastructure. Democratic Sen. Mazie Hirono’s recent bill to address hate crimes against Asian Americans passed the Senate 94-1 after nearly two weeks of bipartisan discussions. Senator Hirono credited GOP Sen. Susan Collins of Maine with helping her to broaden support for the bill while retaining its core purpose.

Democratic Sen. Chris Coons of Delaware, who filled Mr. Biden’s seat in the Senate when the latter became vice president and is a close ally, says the president’s calls for bipartisanship are not only genuine but imperative.

“Joe Biden has served in this body 36 years. He understands, better than anybody, that durable solutions are bipartisan solutions,” says Senator Coons, noting that the former vice president also dealt with GOP obstruction to President Barack Obama’s agenda. “So he actually understands … both how hard it is to make progress in the face of partisan division, and how important it is.”

Many GOP senators say they’re willing to work across the aisle. If the administration sincerely wants to unify the public around common policy priorities, “then I will be on the front lines of that effort,” says Senator Young, who is working on a bipartisan bill with Majority Leader Chuck Schumer to keep America competitive vis-à-vis China. But, he adds, “If this is window dressing for a profligate spending spree that our children and grandchildren will be paying off, this United States senator will cease to take any part in it, in fairly short order.”

And they say they will be listening carefully as Mr. Biden delivers his address tonight.

“I want to hear him outline clearly a commitment to bipartisanship in pursuing the remainder of his agenda,” said Senator Collins in a statement to the Monitor, adding that she liked the president’s inaugural address but has yet to see those calls for unity put into practice. “I want to see him pledge to be the unifier that he promised us he would be, and outline specific steps on how he plans to accomplish that.”

“But,” he adds, “I’ll be much more interested in seeing what actually happens. Words matter, but action matters more.”

Why the GOP chose Tim Scott to respond to Joe Biden