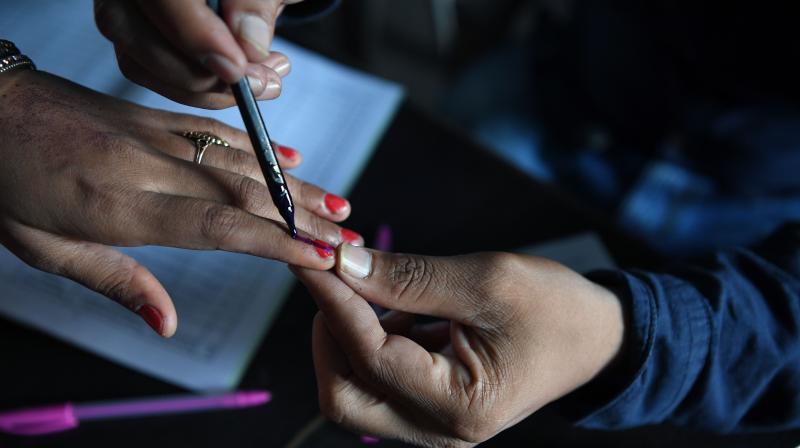 Hyderabad: Except for the Telangana Rastra Samiti (TRS), none of the major parties could field candidates for all the divisions in the two municipal corporations and five municipalities that are going to the polls on April 30.

However, rebels from the TRS, Congress and the BJP remained in the fray even after the deadline for withdrawal of nominations ended on Thursday. The rebels filed their papers as independents or as candidates of parties recognised in other states and other parties registered with the TS Election Commission (TSEC).

In the Greater Warangal Municipal Corporation (GWMC), the TRS and the BJP fielded candidates for all the 66 divisions, the Congress 65, the CPI and the CPIM 16, There were 52 candidates from other registered parties and 237 Independents are in the fray.

In Khammam Municipal Corporation (KMC), the TRS has fielded 57 candidates and allotted three divisions to the CPI. The BJP could field candidates for 47 divisions and the Congress 48. Among the others, CPM fielded nine candidates, Telugu Desam eight, Independents 67 and recognised parties in other states and other registered parties with TSEC 12.

In Nakrekal municipality, of the 20 wards, the TRS fielded candidates for all of them. The BJP could put up 14 and the Congress 16. Candidates of other parties who filed nominations include the CPM three, TD one, other registered parties 14 and Independents 25.

TRS candidates filed nominations for all 27 wards of the Jadcherla municipality. The Congress managed 25 and the BJP 22. Others who filed nominations include CPI three, CPM one, AIMIM seven and Independents 27.

Atchampet and Kothur municipalities are exceptions, where the three major parties have fielded candidates for all the wards. Atchampet municipality has 20 wards and Kothur 12. In Atchampet, 6 Independents are in fray while in Kothur there are 11 Independents.

GHMC reduces containment zones to 52 despite rise in Covid cases