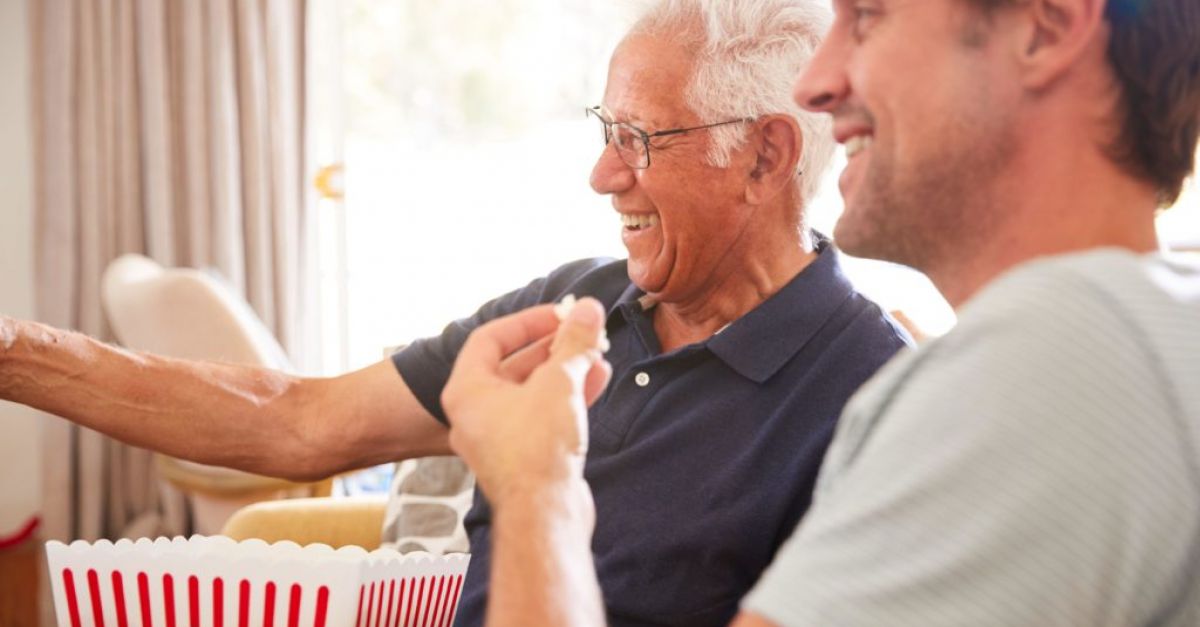 Cinemas are still closed, sob. But that doesn’t mean you can’t settle down on the sofa with a good movie…

“This is a story of boy meets girl but you should know up front, this is not a love story…” begins the droll narrator of Marc Webb’s quirky comedy. From the opening frames of (500) Days Of Summer, we are acutely aware that this romance on the sun-dappled streets of New York City has no happy ending. Love can be uplifting and inspiring, but it can also be cruel and unforgiving.

Scott Neustadter and Michael H Weber’s polished screenplay defies conventions and expectations at every turn. Chronology is intentionally fractured to juxtapose contrasting episodes in a relationship, which unfolds over the course of 500 tumultuous days. Tart one-liners are tossed hither and thither and director Webb even conducts a glorious song and dance sequence through Central Park complete with an animated bluebird that recalls a frolicking Amy Adams in Enchanted. Scriptwriters Neustadter and Weber cannot resist a cute, upbeat coda.Love is a battlefield but some survive the melee.

Brevity is the soul of writer-director Christopher Nolan’s harrowing wartime drama. In his shortest feature since acclaimed 1998 debut Following, the Oscar-nominated filmmaker crafts a stunning mosaic of personal stories of hard fought triumph and agonising defeat against the sprawling backdrop of the largest evacuation of allied forces during the Second World War.

Nolan adopts a stripped back approach to storytelling that jettisons dialogue for long sequences. He sets our nerves on edge in a hauntingly beautiful opening scene and steadily tightens the knot of tension in our stomachs until we are physically and emotionally spent.

Pulses race in time with composer Hans Zimmer’s terrific score, which includes a soft percussive beat like a clock ticking down to doomsday, and a new arrangement of Elgar’s melancholic Nimrod from Enigma Variations. By keeping his script lean, Nolan allows us to remain white-knuckle taut in our seats for the duration.

Comic whirlwind Jack Black ramps up his manic energy to gale force 10 in a fast-paced fantasy adventure based on the series of children’s books by RL Stine. Directed with brio by Rob Letterman, Goosebumps is a wicked delight, packed full of spooks and scares that should have adults jumping out of their seats almost as often as little ones.

Explosions of comic book violence, including a slip-sliding tussle between the Abominable Snowman and high school students on an ice rink, are orchestrated with black humour and vim. Darren Lemke’s lean script barely pauses for breath between eye-popping set pieces but still finds time to flesh out a compelling teenage love story that remains the right side of sickly sweet.

Digital effects are impressive, seamlessly integrated with live action to conjure scenes of large-scale destruction including a runaway Ferris wheel and a town under attack from a giant praying mantis. A tricksy treat.

Before Mean Girls and Clueless, there was Heathers. Written by Daniel Waters, this delicious black comedy directed by Michael Lehmann relishes the tribal warfare between high school cliques. More than 30 years after the titular coterie of bullying harpies first sashayed into view, Lehmann’s picture has lost none of its power to shock and delight, laden with instantly quotable dialogue (“Did you have a brain tumour for breakfast?”; “I love my dead gay son”) that has been endlessly imitated but seldom outshone.

Winona Ryder plays the fourth member of the eponymous harem until she has an unfortunate altercation with Heather Chandler (Kim Walker) at a party. Battle lines are drawn and in the ensuing melee, Veronica and oddball J.D. (Christian Slater) kill Heather with drain cleaner and stage her demise as a suicide.

The queen bee is transformed into a martyr and Veronica’s plan spirals wildly out of control. How very.

Based on the novel by Kathryn Stockett, The Help explores the touching relationship between two black maids in 1960s Mississippi. Written for the screen and directed by Tate Taylor, the film is an embarrassment of acting riches, anchored by tour-de-force performances from Viola Davis and Octavia Spencer. The latter deservedly won an Oscar for her portrayal of fiercely outspoken maid Minny, who is renowned for her chocolate pies.

Every role is perfectly cast including Sissy Spacek in scene-stealing form as an outspoken southern matriarch with faltering memory, who delights in her racist daughter’s humiliation. The Help marries strong and often wickedly funny performances with a sharp writing and heartfelt emotion, evoking an era of social upheaval and racial tensions.

The script is littered with delicious one-liners (“Love and hate are two horns on the same goat… and you need a goat!”) ebbing and flowing between various storylines, much like the Pearl River that cuts through the state and washes away so many sins.

Scriptwriters Phil Lord and Christopher Miller, masterminds of the award-winning 2014 original, show a delightful disregard for convention as they lampoon the Marvel and DC Comics universes and swathes of pop culture.

Two hapless singletons are mired in a Groundhog Day-style time loop in director Max Barbakow’s award-winning confection, which embraces the tropes of a feelgood rom com and proves you can always crowd-please with smart writing and well-matched leads.

Andy Samberg and Cristin Milioti spark instantly as the disinterested wedding guest and inebriated maid of honour, who throw caution (and their clothes) to the wind at the end of Palm Springs nuptials, only to discover they are condemned to repeat the same booze-sodden day for eternity. With each reset, their characters alter behaviour to hopefully rewrite the future. However, director Barbakow and screenwriter Andy Siara are one step ahead of them, throwing unexpected curveballs to keep everyone on their toes and prevent a neat central conceit from feeling stale.

The final act is a tad messy but a show-stopping dancefloor sequence and Samberg and Milioti’s zinging rapport guarantee goofy grins for most of the 90 minutes.

Life begins at 34 in director Alex Thompson’s award-winning comedy drama about a rudderless singleton, who confronts deep-rooted fears and insecurities after she fumbles her way into a position of responsibility caring for a six-year-old girl. Saint Frances coolly navigates hot button topics, abortion, postpartum depression, breastfeeding in public, with understated elegance and candour.

The script, co-written by Thompson and lead actress Kelly O’Sullivan, revels in the minutiae of everyday life and, refreshingly, does not blow out of proportion the central character’s stumbles on her way to hard fought self-enlightenment. The menstrual blood-soaked aftermath of a one-night stand, which might be played for gross-out giggles or discomfort in clumsier hands, is a catalyst for genuine tenderness.

Pacing is deliberately slow to allow contemplative words to breathe and the cast to fully inhabit richly drawn roles including a star-making turn from wunderkind Ramona Edith-Williams, who strikes a perfect balance between cuteness and precocity.

9. SCHOOL OF ROCK (PG, 105 mins)Streaming now on Amazon Prime Video and from May 1 on Netflix

School Of Rock is Dead Poet’s Society with electric guitars and an attitude – a rumbustious romp for the entire family with a central message about following your dreams, no matter how ridiculous, far-fetched or seemingly unattainable.

At the film’s heart is a mesmerising, tour-de-force comic turn from Jack Black as a supply teacher, who instils his kids with his sense of wonder, joy and childish enthusiasm. He is hysterical and interactions with a talented young cast are impeccably timed. “Freddy, what do you like to do?” he asks one boy. “I dunno… burn stuff?” replies Freddy (Kevin Alexander Clark) dryly, who gradually comes out of his shell as a bad boy drummer.

Screenwriter Mike White builds tension gradually, reaching a crescendo with a stomping battle of the bands showcase that will have you laughing, cheering and shedding a tear or two all at once. To quote Dewey: “Now raise your goblet of rock!”

A star is reborn in the third remake of the rags-to-riches fairy tale, which originally starred Janet Gaynor and Fredric March. The 21st-century twinkling doesn’t emanate from pop chameleon turned Oscar-nominated actor Lady Gaga, who is luminous as a naive and vulnerable ingenue rocketing into the musical firmament.

No, the film’s retina-searing ball of light is Bradley Cooper as her grizzled mentor and lover. The Philadelphia-born leading man nestles confidently into the director’s chair for his debut feature but he truly dazzles in front of the camera, drenched in the sweat and self-loathing of a booze-soaked showman, who is staggering towards the precipice of oblivion.

Cooper rocks and rolls in exhilarating concert sequences and performs his character’s signature tracks with gravelly-voiced aplomb including a duet with Gaga on the Oscar-winning ballad Shallow. Screen chemistry between the leads is molten and you can almost feel the heat rippling off the screen in breathlessly choreographed bedroom scenes.

Roller-skating, Farrah Fawcett hair and disco: Why are the 1970s back in fashion?