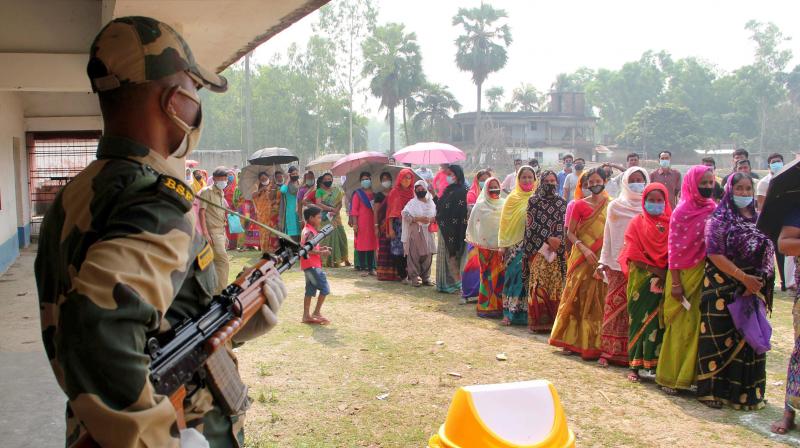 Kolkata/Berhampore: The seventh phase of the Assembly elections in 34 seats spread over five districts in West Bengal recorded 75.06 per cent polling that went off peacefully except some stray incidents of violence in Murshidabad on Monday.

While nine seats in Murshidabad saw voter turnout of 80.30 per cent, six constituencies in South Dinajpur of North Bengal saw 80.21 per cent polling with 78.76 per cent and 70.34 per cent voting in six seats of Malda and nine in Burdwan West respectively from 7 am to 5 pm.

However four hot seats — Bhowanipore, Rasbehari, Ballygunge and Kolkata Port — in South Kolkata clocked only 59.91 per cent polling during which chief minister Mamata Banerjee and her MP nephew cast their votes. A revised figure of polling is expected from the Election Commission on Tuesday.

Unlike other districts, Murshidabad remained tense since morning. At Senapara, Raninagar BJP candidate Mashwara Khatun's car was attacked and her polling agent was beaten up by armed Trinamul Congress workers. The police had to rescue her.

Allegations again surfaced against the Central paramilitary forces of ransacking Raninagar block TMC president Mizanur Rahman's residence and destroying food. When district TMC president and MP Abu Taher Khan went there, angry workers of his party shouted "Go Back" slogans at him. He was soon seen leaving in his car in face of the protest. At Gurapasla High School in Nabagram, the Central forces allegedly beat an elderly TMC worker so much that he had to be admitted at Nabagram Hospital.

Later the CM, while lashing out at the Central forces over its excessive use of force, said, "We will lodge an FIR against the CRPF in these incidents." In Farakka, an aged TMC worker, Janmejoy Mondal, was injured in an attack by the BJP workers armed with sharp-cutting weapons. He was admitted at the Farakka Hospital.

Murshidabad Congress candidate Niyazuddin Sheikh was caught by the TMC workers distributing money hidden in masks at a booth in Gudhia High School. But Mr Ahmed claimed that he distributed only masks to the voters for their protection from Covid-19. The Election Commission has sought a report of the incident.

Meanwhile, Jalangi Sanjukta Morcha candidate Saiful Islam Mollah from the CPI(M) and his three associates were attacked by the TMC workers with bamboo poles and sticks at Choanpara.