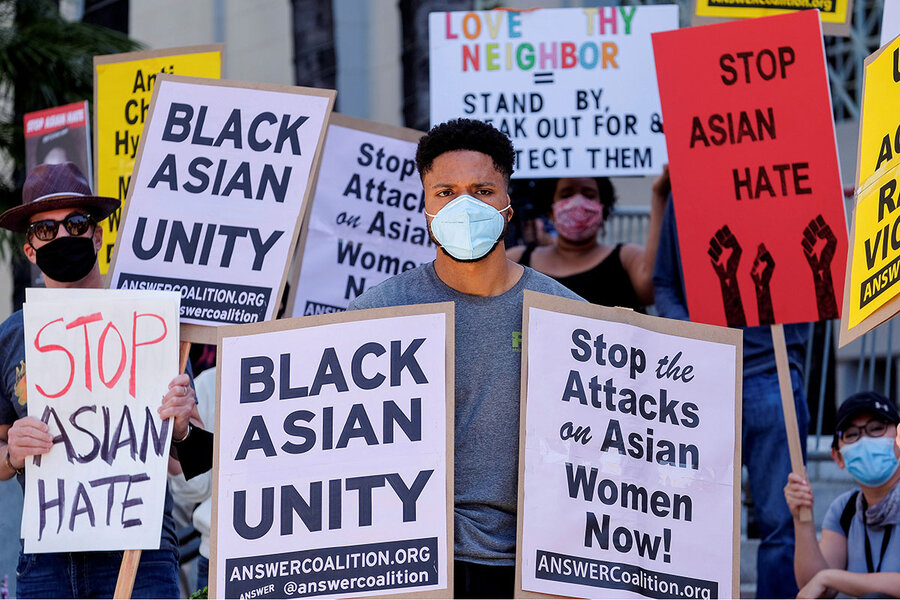 Emma Tang, a Taiwanese American student at New York University, was sitting outside a Chinese restaurant last October, eating with her friends, when a white man approached her from behind and hit her over the head with a dirty bed sheet.

Shocked – and despite her friends saying they thought she was a victim of a hate crime – Ms. Tang never reported the incident to police. Instead, she took to Instagram, and her 84,000 followers.

But her posts didn’t go over well online. Black activists took issue with Ms. Tang for perpetuating stereotypes that Black people are dangerous and that Asian people need help. “I was trying to have a conversation about how Black people can stand in solidarity with Asian people more, and it came off badly,” says Ms. Tang. “Black activists started calling me out and they started having conversations with me.”

The fight for justice is not a zero-sum game. Solidarity across racial groups in protests against anti-Asian hate demonstrates that.

One of them was Kiara Williams, from Queens. “She was trying to address what the Asian community was going through and rightfully so,” Ms. Williams says, “but she was kind of villainizing the Black community.”

After the two spoke online, Ms. Williams invited Ms. Tang over for lunch, where the women bonded over their shared pain. “Both of our communities are there for each other. There is no, ‘You hurt me more. No, you hurt me more,’” says Ms. Williams.

The two are now friends and work together as “comrades” to advance Black and Asian solidarity. “I think we’ve both changed each other’s perceptions of our communities,” says Ms. Tang.

In the wake of the recent mass shootings in Atlanta, in which eight people were killed, including six women of Asian descent, communities of color are mobilizing together because of their shared struggles and common goal of battling racism. “The fact that so many Blacks and Hispanics marched in solidarity with Asian groups … is a positive indication that minorities see injustice against one group as injustice against all,” says Earl Ofari Hutchinson, a radio show host, political analyst, and author of “Why Black Lives Do Matter.” “This could be a huge political game changer in the future,” he adds.

Gabriel “Jack” Chin, a law professor at the University of California, Davis, also calls this moment a turning point. “There’s more discussion, there’s more anxiety, there’s more fear, there’s more identification of a particular problem than I’ve ever seen before. And the only thing I can analogize it to historically is the civil rights movement of the ’60s.”

Martin Luther King Jr. used the media to advance his civil rights cause, but the news coverage often failed to capture the racial unity at his demonstrations. “There were white people there. There were Latino people there. But it wasn’t necessarily covered that way,” says Clara Rodriguez, professor of sociology at Fordham University’s College at Lincoln Center. “It’s both history and this tendency to view groups separate from one another, and I think it contributes to people thinking in terms of ‘Well it’s that group, and I have nothing to do with that group.’”

For Ms. Tang, the fight is intersectional, but she acknowledges that there is anti-Black racism in the Asian American community, which can lead to distrust between the two groups. In fact, however, the notion that there are high levels of Black-on-Asian crime is false. Researchers at the University of Michigan found that, in 2020, 90% of perpetrators in reported anti-Asian incidents were white, and only 5% of perpetrators were Black.

While some may try to weaponize Black-Asian conflict, hate-inspired tragedies like the 2019 mass shooting targeting Mexicans at a Walmart in El Paso, Texas; police killings of Blacks and Latinos; and the Atlanta shootings are actually fueling unity. “What you have seen as a result of these highly visible and highly tragic events is the intensifying of a reckoning with how racism and discrimination have infected many of our systems and people at the same time,” says Clarissa Martínez-de-Castro, deputy vice president for policy and advocacy at UnidosUS, the nation’s largest Latino civil rights and advocacy group. “And they need to stand up and not only call it out, but do the work to address the disparate treatment and fight for equity.”

Some people of color, like Ms. Tang and Ms. Williams, are fighting for the collective – “to do right by all communities of color,” as Ms. Williams puts it. They are uniting to dismantle stereotypes like the “model minority” myth, which pits minority groups against each other. Asian Americans, for example, are often praised for being well educated and successful. And while it is true that they have the highest median income across racial groups, including white Americans, the income gap among Asian Americans is the largest within any racial or ethnic group in the country, with almost 10% of the community living below the poverty line. Rather than presenting an accurate picture of the diversity among Asian Americans, the “model minority” stereotype is held up to other groups as a sign of their failure.

Ms. Williams benefited from that unity when she attended her first protest after George Floyd’s murder. She was overwhelmed, she says, to see the multiracial makeup of the Black Lives Matter marches last summer. “For a long time, I thought Black people were alone.”

In fact, nonwhites across races share concerns on a variety of issues, including immigration reform and U.S. policy at the Mexico border. “I think Asians can understand some aspects of the Latinx situation as fellow immigrants. And, of course, there’s a lot of undocumented Asian people in the United States,” says Professor Chin from UC Davis. “Asian-Americans have an experience of being hassled by the police in the same way as Latinx people at the border.”

Cross-activism on matters like policing and anti-racism is unprecedented right now, but according to Mr. Hutchinson, the radio show host, it’s still not enough to create true solidarity. “Will that unity translate into unity in a fight together on such issues as voter suppression, housing, jobs and education, and health disparities?” he asks.

Mr. Chin wonders as well, noting that, despite the current unity, there is not “a utopian agreement among all these racial groups.”

“We need one another”

Yet some young activists believe this moment is the beginning of their revolution. Ms. Tang calls it “the birth of a fresh, new, powerful coalition of BIPOC communities aligning together in the grassroots sphere” (referring to Black, Indigenous, and other people of color).

Ms. Williams, for one, says she is dedicated to supporting other communities of color because she sees their struggles against oppression intertwined with hers. “It’s about being mentally strong, never backing down,” she explains.

Ms. Tang concurs. At a recent solidarity march, she witnessed a diverse crowd of Black transgender women, Indigenous people, and Latinos fighting for women of Asian descent. “It feels very validating, and it makes me feel safe knowing that there are people looking out for us. And we don’t have to fight this on our own,” she says.

Ms. Tang, who hides a taser up her sleeve whenever she leaves her apartment, says she’s less fearful now whenever someone yells a racial slur or harasses her in the streets. “Stop Asian Hate would not be around today without Black Lives Matter,” she says. “Our movements have always bounced off of each other and been inspired by each other. Historically we need one another to advance our liberation.”