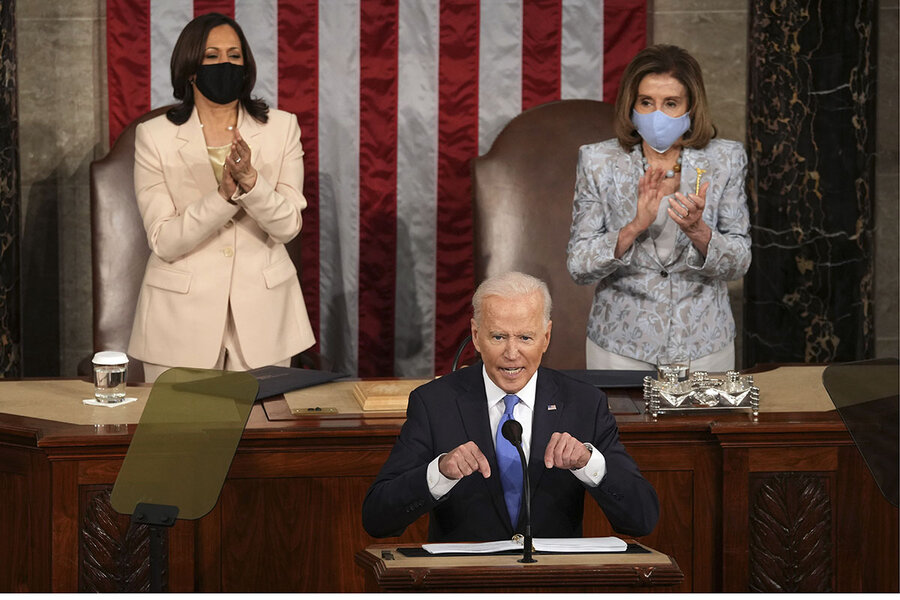 Thursday marks President Joe Biden’s 100th day in office, a traditional milestone that he and his team have been aiming toward since he won the Democratic nomination, if not before.

It’s an arbitrary point at which to sum up how a new U.S. chief executive is doing. But the media has closely followed presidents’ first 100 days for almost a century, judging promises kept or broken, and what that may mean for the many hundreds of days left in a presidential term.

As a candidate, Mr. Biden vowed that controlling the COVID-19 pandemic would be a top priority. The United States seems on the verge of doing so, as the administration has promoted efforts to tamp down infection rates while pushing mass vaccination.

So far, President Biden has followed through on a number of campaign promises – particularly on the pandemic. But he’s gotten relatively few bills through Congress, and the path ahead is likely to grow tougher.

Congress passed Mr. Biden’s $1.9 trillion COVID-19 relief bill in March, sending direct payments to voters while extending unemployment aid and a moratorium on evictions. The president has fulfilled promises to reverse a number of former President Donald Trump’s executive actions, including rescinding the Keystone oil pipeline permit, rejoining the Paris climate agreement, and ending the travel ban on people from a number of majority-Muslim countries.

Whether Mr. Biden can push through ambitious pending items such as his massive infrastructure bill remains to be seen. His immigration policy is in turmoil as a surge of unauthorized migrants has swamped the border.

But if nothing else, Mr. Biden’s first 100 days have signaled his vision for his time in office, centered on his belief that the federal government has an active role to play in Americans’ lives.

To this point, Mr. Biden’s presidency has revolved around government spending, actual and proposed. His COVID-19 relief bill authorized direct government checks for many Americans. In a speech to a joint session of Congress on Wednesday night, he outlined a $1.9 trillion, 10-year proposal for aid to workers, families, and children – on top of the trillions for infrastructure spending he requested in March.

Public judgment of Mr. Biden’s first 100 days has been mixed, but generally positive.

Unlike most new presidents, he has not benefited from much of a honeymoon period, as his job approval rating at this point is lower than that of any newly elected president going back to Dwight D. Eisenhower, with one exception – his predecessor. President Trump’s job approval number at 100 days was just 42%, according to the FiveThirtyEight poll averages, while Mr. Biden’s is above water at 54%. (Gerald Ford’s approval rating was also lower than Mr. Biden’s at 100 days, but he was an unelected president, and unpopular at the time due to his pardon of Richard Nixon.)

Mr. Biden has been buoyed by good numbers on particular issues. A Reuters/Ipsos poll from mid-April found that 65% of Americans approve of the way he has handled the coronavirus, and a majority approve of how he has handled jobs, the economy, and unifying the country.

These numbers may reflect the campaign promises he has followed through on, including:

Rejoining the World Health Organization and the Paris climate accord on his first day in office. He also reversed Mr. Trump’s ban on transgender Americans serving in the military, as well as Mr. Trump’s travel ban aimed at some majority-Muslim countries. Extending a pause on student loan payments and housing evictions and foreclosures. Vaccinating more than 200 million Americans over the past three months, surpassing the goal of 100 million. Convening a world climate summit and pledging to cut U.S. greenhouse gas emissions by at least 50% by 2030. Creating a task force to help reunite the hundreds of immigrant children separated from their parents. Sending a bill to Congress to provide a pathway to citizenship for America’s 11 million unauthorized immigrants (although the bill has not passed).  Announcing U.S. withdrawal of troops from Afghanistan by Sept. 11, 2021. Slapping new sanctions on Russia in response to cyber intrusions and efforts at 2020 election interference.

Why use 100 days as the benchmark? Why not 50 – or 365? To administration staffers, the made-up nature and media hype of the moment can be frustrating. David Axelrod, senior adviser to former President Barack Obama, once called the 100th day the “journalistic equivalent of a Hallmark holiday.”

But it does have historical roots. Shortly after being sworn in as president amid the Great Depression in 1933, President Franklin D. Roosevelt unleashed a burst of action to try to rally a demoralized nation. It included creation of the Civilian Conservation Corps, passage of the National Industrial Recovery Act, the establishment of the Tennessee Valley Authority, and other actions to build the core of what became the New Deal. It was the first of the first 100 days.

Ever since, presidents have been measured against that activist beginning.

“[The 100-day mark] has become an initial judgment on the presidency. If it’s good, it’s going to help him in his next year. If it’s bad, it will hinder him,” says Elaine Kamarck, director of the Brookings Institution’s Center for Effective Public Management. “It’s somewhere in between a Hallmark holiday and something important.”

Still, a president’s first three months don’t necessarily reflect how the president’s term will be remembered years later. President Jimmy Carter, for example, was largely considered to have had a successful first 100 days, but went on to lose reelection. And while the disastrous Bay of Pigs invasion occurred during President John F. Kennedy’s first 100 days, his presidency is mostly remembered fondly.

Many presidents’ signature achievements, such as President Obama’s health care reform and President Bill Clinton’s balancing of the federal budget, come after their first 100 days.

“You read all these newspaper articles and it’s like, ‘Here is the president’s report card.’ I mean, I don’t grade my students after 100 days,” says Sidney Milkis, a professor at the University of Virginia and an expert on the American presidency.

“I don’t think there is any strong relationship between how you do in your first 100 days and what you achieve in your presidency,” adds Mr. Milkis. “It’s a benchmark that got established because of its extraordinary importance during [FDR’s tenure].”

One metric in which President Biden has so far fallen short is passage of legislation. His COVID-19 relief bill was indeed historic in size and rated as popular in polls, but it wasn’t part of a deluge. According to GovTrack, only seven laws have been enacted thus far in Mr. Biden’s term – a fraction of what’s been passed in the first 100 days historically. FDR had 76 bills passed into law during this time, and Mr. Biden’s immediate predecessors, Mr. Obama and Mr. Trump, had 14 and 30, respectively.

Mr. Biden has plans to change this. He’s proposing spending bills so big they might rewrite the role of the government in the U.S., including a $2.3 trillion infrastructure bill outlined in March, and $1.8 trillion in spending and tax cuts over 10 years for workers, families, and children, as announced in Wednesday night’s speech.

But Mr. Biden faces a very different political landscape than did his two most recent predecessors or Roosevelt. They all enjoyed wide party majorities in both houses of Congress. Mr. Biden has the slimmest House majority in modern history, while Vice President Kamala Harris has already cast four tiebreaking votes in the Senate, a record this early in a presidency.

And legislating will likely only get harder for Mr. Biden as his term goes on. It could screech to a virtual halt if Republicans make big enough gains in the 2022 midterm elections to take back one or both congressional chambers.

“The worst enemy of good legislating is time,” says Joel Payne, a Democratic strategist who worked in former Senate Majority Leader Harry Reid’s office as the negotiations for the 2010 health care reform bill were dragged out. “The more time you lose, the more leverage you lose – and all of this is in the back of the head of the Biden team.”

This worry may rise as the Biden administration considers its promises for the first 100 days that were not completed:

Opening the majority of U.S. public schools that have been closed due to the COVID-19 pandemic. Reversal of Mr. Trump’s corporate tax cut. Enactment of the Equality Act to ensure equal rights for LGBTQ Americans and direct federal resources to help prevent violence against transgender women. Ordering of an FBI report on how to ensure background checks are completed for gun purchases. Extension of the Voting Rights Act. Passage of the Safe, Accountable, Fair, and Effective Justice Act. Provision of resources for asylum-seekers and for reforming the asylum system. Convening of a regional meeting with leaders from Mexico, Canada, and Central America to address migration and propose solutions. Ending long-term detention centers and raising the refugee cap to 125,000 from the 15,000 limit set by Mr. Trump.

Some of Mr. Biden’s lowest approval ratings are in response to how he has handled immigration. Most experts agree addressing the status of the U.S.-Mexico border will be the next big hurdle for Mr. Biden and will influence how his administration is remembered after the first 100 days.

Foreign policy also remains a work in progress, in part because it is an area where there are not always easily discernible gains. The Biden administration is committed to resuming a multinational deal limiting Iran’s nuclear program, for instance, but that remains far from a done deal. And managing relations with China, which involves courting Beijing on some issues and confronting it on a range of others – including its repressive actions in Hong Kong – will be a difficult task for however long Mr. Biden remains in office.

“He’s off to a good start,” says Mr. Milkis, “but there are treacherous waters ahead.”

‘We need one another’: Communities of color unite against injustice