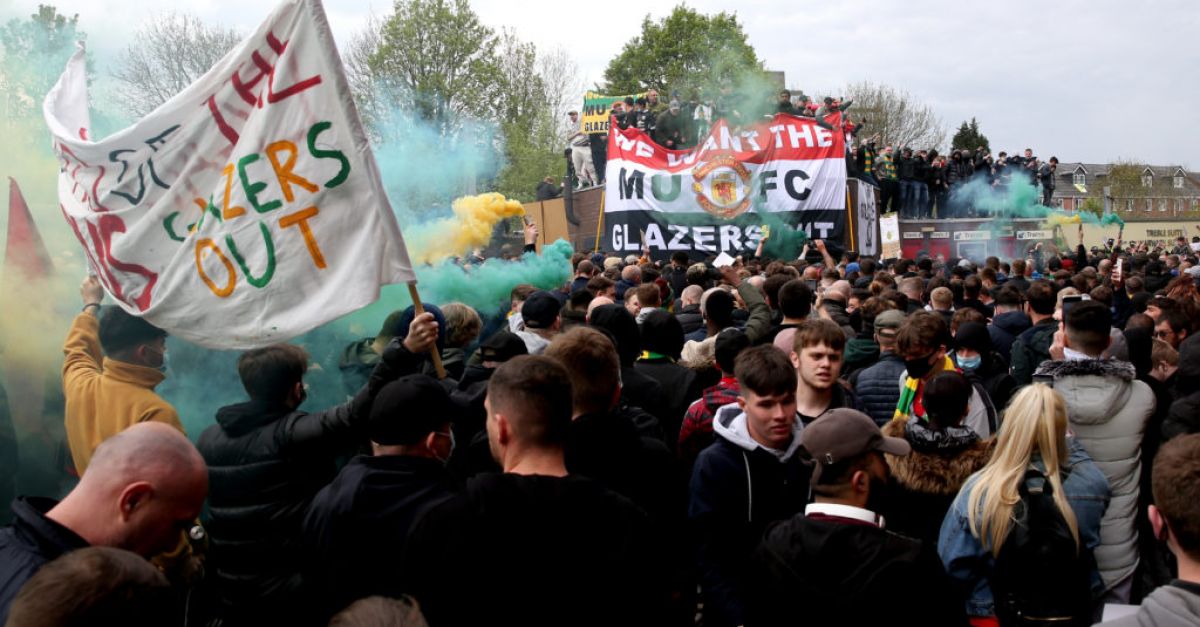 Manchester United fans dramatically broke into Old Trafford and invaded the pitch in protest against the Glazer family, leaving their Premier League match against Liverpool in doubt.

The Red Devils were among 12 clubs that signed up for the breakaway European Super League, which collapsed within 48 hours due to huge, unrelenting pressure.

Those plans brought anger against the already despised Glazer family to a new level, with fans congregating at Old Trafford to demand change ahead of Sunday’s Premier League match against rivals Liverpool.

BREAKING: Angry Manchester United fans are staging a protest against the club's owners after getting inside their Old Trafford stadium.

The match may not go ahead – and at the very least will be delayed – after hundreds of supporters got into the stadium and onto the pitch.

Flares were let off by protestors inside the ground, where corner flags were held aloft and one supporter was seen throwing a tripod from the interview zone.

The PA news agency understands a meeting is under way to establish what happened and the impact on the game, with the pitch damaged by the protestors and Covid-19 protocols to consider.

Fans congregated from around 1pm outside the trinity statue on the Old Trafford forecourt as another group took their protests to the Lowry hotel, where the United team were staying ahead of the game.

Hundreds outside Old Trafford became thousands by the time the protest got under way at 2pm, when two firecrackers were let off and fans began to march towards the Munich Tunnel.

Red fences put in front of the East Stand did not last long, being quickly toppled as stewards were overawed and chanting supporters made their way towards the tunnel.

Footage soon emerged of hundreds of fans on the pitch, with a bunch exiting by jumping down to the nearby canal paths and others running out through the main gates at around 2.30pm.

An hour later another small batch of protestors were seen leaving the stadium. There was no sign of the teams at the ground but the line-ups were announced by the Premier League at 3.30pm.