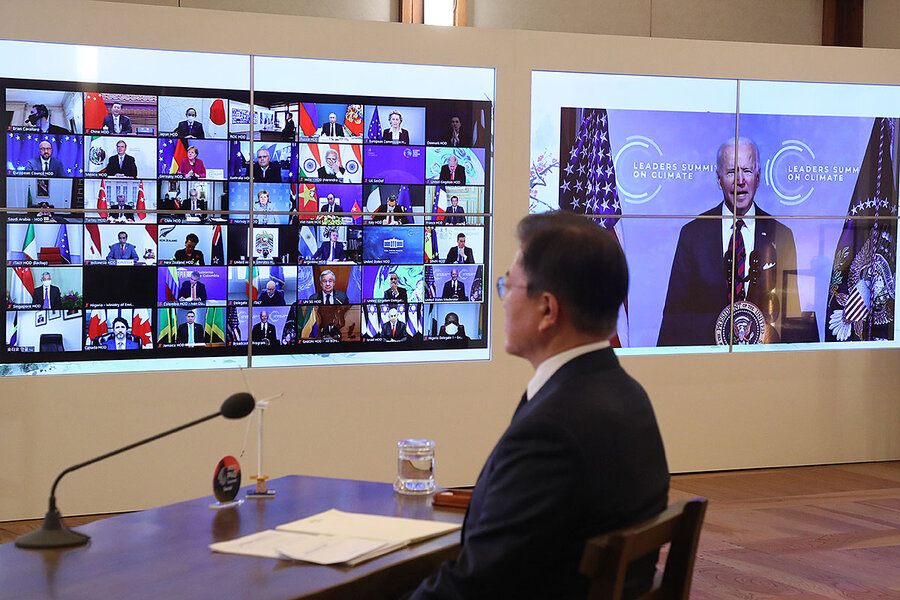 “I am happy to see the cross section of institutions participating today,” said Jane Fraser, chief executive officer of Citi, as she sat on a panel with the CEO of Bank of America and the prime minister of New Zealand. “Solving climate change will require the ultimate public-private partnership.”

Banks and investors made big-dollar pledges. Bill Gates, whose Breakthrough Energy Ventures has already raised its second $1 billion to support climate change innovation, announced his plans to bring down the cost of emerging green technologies. A day earlier, dozens of banks announced a new Net-Zero Banking Alliance. That’s part of a larger new group, the Glasgow Financial Alliance for Net Zero, which pledged to use its $70 trillion in assets to help the world transition to net-zero greenhouse gas emissions by 2050. These came atop a spate of private sector commitments made prior to the summit.

All of this, say climate policy experts, is necessary for there to be any hope of limiting the world’s temperature rise to below 2 degrees Celsius – the global warming target set out in the 2015 Paris Agreement.

“The private sector is essential to delivering so much of the needed climate action,” says Bella Tonkonogy, associate director for climate finance at the Climate Policy Initiative, an analysis and advisory organization.

That’s because addressing climate change will cost a huge amount of money.

According to the United Nations, the extra capital needed to effectively fund climate change mitigation and adaptation is still anywhere between about $1.6 trillion and $3.8 trillion per year – far more than the public sector can provide.

“There’s no government in the world that has enough … in their budgets to be able to provide what we need to make this transition,” U.S. Special Envoy for Climate John Kerry said at the summit. “Ultimately, how governments, international financial institutions, and private providers of capital work together is really going to determine the outcome of this challenge.”

While the calls for private finance to help fund climate action are not new, the recent pledges reflect what some see as a significant shift.

“There is increasing enthusiasm and interest from investors from the financial community, the energy industry, the banks,” says Sasha Mackler, director of the energy project at the Bipartisan Policy Center.

Why momentum is rising

This isn’t because financial institutions have suddenly decided on a whim they now care about climate, experts say. Instead, a combination of factors – from new risk analyses to optimism about the potential returns from climate-related investment – has finally convinced banks that their business depends on getting behind climate action.

As the Biden team has been emphasizing for months, investments in industries connected to climate action, from clean electricity to new carbon-removal technologies, could have huge financial rewards – especially given the administration’s push for public spending to drive the transition.

But financial institutions also increasingly see downsides to not embracing climate action. Late last year, the U.S. Federal Reserve for the first time reported that it would include climate change as a material risk in analyzing the stability of the country’s financial sector. Treasury Secretary Janet Yellen echoed this approach last week, saying that her department will be working with the Securities and Exchange Commission to create reliable, comparable, and consistent reporting standards through which institutions must disclose their climate-related risks – the same way they must now provide financial disclosures.

And these risks are enormous, says Steven Rothstein, managing director for the Accelerator for Sustainable Capital Markets with Ceres, a nonprofit focused on developing a sustainable economy.

Some of that comes from climate change directly – hurricanes that disrupt supply chains, for instance, or floods that upend projected crop yields. But others are what people in the climate finance world call “transitional” risks, those risks related to the shift from a fossil fuel economy to a green energy one. Any new efforts to tax, restrict, or ban fossil fuels would mean that investments in those industries are automatically more precarious.

“The major car companies have said that by 2030 or 2035 they’ll have a fully electric fleet,” Mr. Rothstein says. “If you’re a bank, are you going to lend to a gas station with a 20-year repayment?”

Financial institutions can also reap a public relations benefit of positioning themselves as climate change fighters. For years, a growing number of shareholders, customers, and employees have been asking these companies for a greener approach. If they can promote themselves as climate-friendly, and make money at the same time, then they’ll do it, scholars say.

What does “net zero” really mean?

But many advocates and researchers are still skeptical about what these private finance pledges actually mean.

“Commitments are very important, but figuring out how to follow through on commitments is even more challenging and interesting,” says Giulia Christianson, director of the sustainable private sector finance group at the World Resources Institute.

The banks touting their climate action around the climate summit this month, for instance, are also some of the world’s largest investors in fossil fuels, according to the advocacy group Rainforest Action Network.

Climate targets themselves, including the trendy “net zero” concept, are notoriously sketchy.

Although net-zero generally means balancing carbon emissions with other sorts of reductions, so that a company or industry or financial portfolio is not adding, on the whole, any additional carbon into the atmosphere, there is no consensus on how to actually do this.

And that can lead to some creative bookkeeping, says Lisa Sachs, director of the Columbia Center on Sustainable Investment.

“We see a lot of weird definitions,” she says.

Earlier this month, for instance, U.N. climate adviser Mark Carney had to walk back claims he made that Brookfield Asset Management, where he is vice chair, had achieved net-zero status across its portfolio because its clean investments offset its oil, gas, and coal investments.

“That’s literally like saying, if you have a Diet Coke, it cancels the calories from the hamburger that you have,” Dr. Sachs says. “That’s not how it works.”

Standardization not only of net-zero standards, but also of what data to collect, how to regulate and audit business, and even what to include when evaluating a company’s climate impact will be essential for greening the financial sector, she says. And that, she and others say, will have to intersect with an effective governmental policy and regulatory framework.

“It’s still very complicated,” says Mr. Rothstein of Ceres. “We got into this climate mess as a society by all of us dropping the ball. The only way we’re going to leave a better future for our kids and grandkids is if we’re all working on it – as a shareholder, investor, advocate, or elected official.”

Andrew Brown Jr. shot five times, once in back of head, according to family-backed autopsy

Policing has changed over the last year. Here’s how.