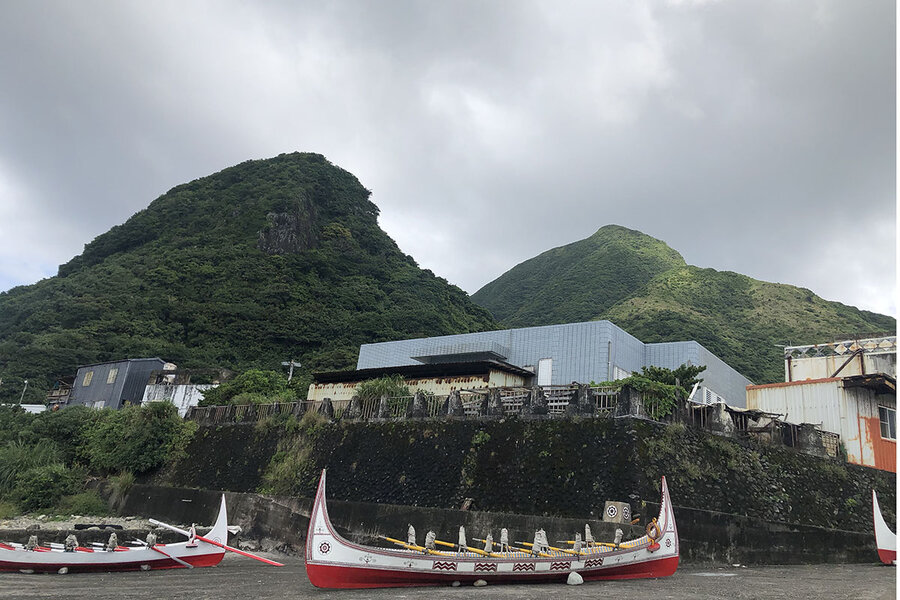 Si Ngalopkop is tiring of the motor scooters and construction trucks rushing past the breakfast bar where he fries up small hot dogs and egg crepes for children on their way to the village school. His oceanside hamlet with just one through street never saw so much congestion, trash, or intrusion until the pandemic – when Orchid Island became the closest thing Taiwanese tourists could get to an overseas vacation.

“They bring in money from the diving and snorkeling but affect the rhythms of our normal life,” says Mr. Ngalopkop one morning, as the engine of a truck bound for a guesthouse construction site vies with the more familiar crows of rooster.

“It’s really loud,” he says. “We welcome the improvement in living standards, but our culture is slowing fading away. There’s no more sense of order.”

The pandemic threw many tourist hot spots into a tailspin. The opposite is true here on Orchid Island. But some locals have a message for visitors: More important than your money is your respect.

Mr. Ngalopkop belongs to the Indigenous Tao people, an Austronesian group that has called Orchid home for thousands of years. The volcanic island lies at the most remote corner of Taiwan’s territory, a prop-jet flight or wavy ferry ride from the mainland’s southeast coast. Its azure and emerald shores are dotted with villages where elders visit outside, sipping energy drinks and chatting in Tao while friendly black dogs – some wearing collars crafted with traditional patterns – run through the alleys between houses.

Orchid’s few thousand residents had grown used to solitude; a travel ban in the name of cultural research stayed in place until 1967. But its tropical waters had gained cachet among Taiwanese divers. That value surged last year as COVID-19 closed borders and drove Taiwanese to look for scenic getaways at home. Today, tourists rent motor scooters to cruise along the bumpy island road, stopping for snaps at rocky overlooks and beaches lined with boats for catching flying fish – and the flowers that give Orchid its name. Some snorkel in the emerald waters sheltered by spiky, grassy seaside rock outcroppings that invite free-roaming goats.

At a time when the global tourism sector stands to lose $1.2 trillion, many residents are excited about the influx. The island’s agriculture and tourism office tabulated 313,166 arrivals in 2020, up from about 230,000 a year earlier. But it has prompted tough questions for the Tao about how their culture and environment can coexist with so many visitors. Tourists often treat locals like an exotic curiosity, shooting photos of them and their homes from the street without asking first or offering to pay.

Mr. Ngalopkop is used to Taiwan’s main isle, having lived there 20 years before moving back to Orchid a decade ago. But he’s not used to Taiwan merging with Orchid.

“Tourists must do their homework before coming over,” Mr. Ngalopkop says. “I want to make money, but I want to protect my culture.”

A block away, in an alley of single-story houses just off Yayo Village’s boat launch, Lin Chih-yuan is visiting his hometown for the first time in five years. Like many Tao people in his age group, the 23-year-old moved to Taiwan’s more prosperous, 24-million-population main island, where he works at a convenience store.

Mr. Lin welcomed the two 7-Elevens that have popped up on Orchid since 2014, meaning people can buy toys and daily goods rather than just food from a farmers cooperative – the chief option before. He’s weighing whether to spend his earnings to open an Orchid guesthouse after fixing up his grandparents’ home along the alley.

“If Orchid develops, overall that’s a good thing for it,” he says. “We were really lagging in the past.” But he advises tourists to learn local customs in honor of elders, and to keep Orchid clean.

“When it comes to the local ways of doing things, people like my grandmother are more conservative,” Mr. Lin adds.

Overall, just 2% of Taiwan’s population is Indigenous, with ancestors who were here before the Han Chinese started sailing east several centuries ago. Unstudied tourists arrive knowing little about the Tao. They don’t know passersby aren’t supposed to touch locals’ hand-carved boats, built to withstand heavy waves as they chase flying fish, the island’s staple food. They don’t know that the black-roofed stone houses dug into the earth to protect against typhoons once dominated Orchid, or that men wearing loincloths, whom travelers often ask to photograph, are donning the island’s traditional attire.

Some tourists upset Tao elders by wearing bikinis, or running their hands over painted boats that younger men have built and will row hundreds of miles as a rite of passage. Tour guides who have moved to Orchid, rather than being born there, miss those cues, Tao people fear.

“Capitalism came in when the government built an airport and seaport,” Mr. Ngalopkop says. “The tourists have upset the balance of our lives and traditions. They shoot photos of boats and might destroy something that our elders have spent up to 10 years making. That’s disrespectful.”

Adding to people’s resentment of Taiwan at large, government-owned Taiwan Power Company deposited 100,000 barrels of nuclear waste on Orchid’s otherwise undeveloped eastern coast in 1982. Plans to remove it are on hold for lack of a willing taker elsewhere. Some Orchid dwellers are convinced the waste is harming people’s health.

Not every local minds tourists’ transgressions, says Diveholic Hostel operator Hu Ken-huo, who is a Tao elder. More than half the island’s rooms fill up easily on weekends, and “they’re coming to look at the special character of Orchid Island.”

That’s true of Chien Chu-you, a service worker who spent four days here with a group of friends. He’s excited about his arrival, but acknowledges not knowing much about Tao culture.

“I usually go to Japan and South Korea. Coming here is actually quite similar to overseas travel, though if you don’t hire a guide you won’t know where the attractions are,” Mr. Chien says. “I’ve honestly never studied the culture. We’re just looking at the map and figuring out where to go.”

Helping tourists like Mr. Chien experience Orchid earns Hsieh Lin-shan up to $10,700 in the high season. The Orchid native, who is a member of the Tao group, guides people around a neighborhood of 15 preserved underground houses. It’s an enviable income for the island, he says, but it’s never certain. And he resents tourists’ invasive photography, as well as their trash. Crushed soda cans and plastic shopping bags thrown from tourists’ scooters mix on the roadsides with the brown glass bottles of the energy drinks that locals prefer.

Tourism will likely expand, but a government agency may intervene at some point to help the Tao protect their culture and keep Orchid clean, says Linda Arrigo, an American-born academic researcher in Taiwan who studies Indigenous issues. She points to the eventual cleanup of metal scraps strewn along the coast after Orchid’s road construction. But once COVID-19 passes, she warns, Orchid Island tourism may lose momentum. “It’s like amusement parks – they deteriorate and they’re left with a stack of twisted metal.”

Visitors are “welcome to look around and buy souvenirs,” Mr. Hsieh says between guide shifts, when he co-manages a Tao fishing boat replica shop. “But please don’t throw your trash everywhere. Look to see if there’s a trash can or take it back to Taiwan. If you want to take photos of someone, ask first. You must respect everyone’s personal stance.”