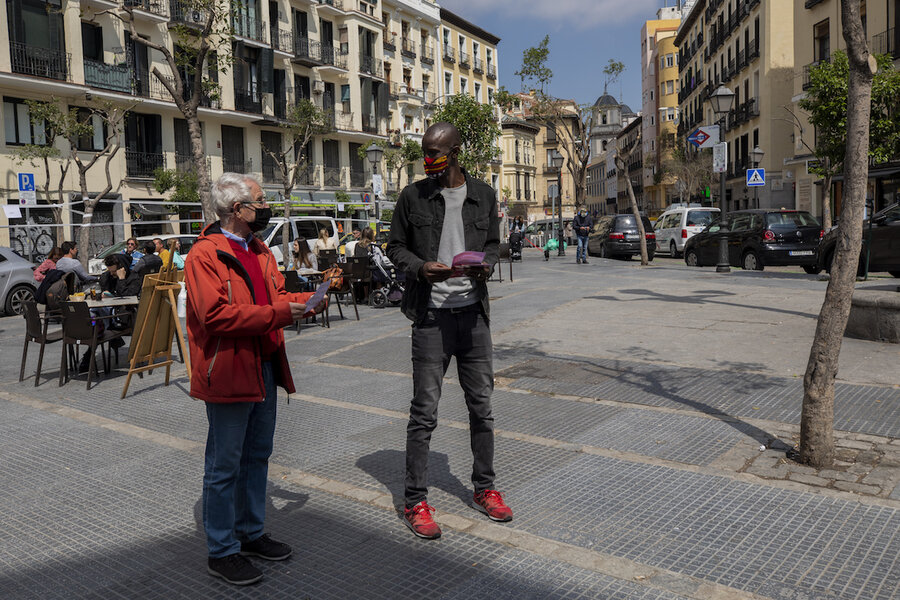 Two young Senegalese men met on a Europe-bound migrant boat in 2006, a year that saw a record influx of Africans to Spain’s Canary Islands.

Since then, one died of a heart attack running away from Spanish police and the other is running in a polarized election Tuesday for a seat in Madrid’s regional assembly.

Serigne Mbaye not only wants to fight what he considers to be “structural racism” against African migrants but also to defy a history of underrepresentation of the Black community and other people of color in Spanish politics.

“That’s where all discrimination begins,” he told The Associated Press.

In 2018, having failed to secure legal work and a residence permit, the man he met on the boat – Mame Mbaye, no relation – died of a heart attack eluding a police crackdown on street vendors.

After that, Serigne Mbaye, who at the time represented a group of mostly Black African hawkers, became one of the most vocal voices against Spain’s Alien Law, saying it ties migrants arriving unlawfully to the underground economy. The regulation also punishes them with jail for committing minor offenses, leaving them with a criminal record that weighs against their chances of getting a residence permit.

“His image at night when we were on the boat always haunts me,” said Mr. Mbaye, who is now a Spanish citizen. “The sole fact that he is dead and I’m alive is because of an unjust law that condemns and punishes us. Some of us make it. Some can spend 20 years in a vicious circle without papers.”

Mr. Mbaye is running on a ticket with the anti-austerity United We Can party, the junior partner in the country’s ruling, Socialist-led coalition.

Only a handful of Black people have succeeded at the top level of Spanish politics. Equatorial Guinea-born Rita Bosaho, now the director of racial and ethnic diversity at Spain’s Equality Ministry, in 2015 became the first Black national lawmaker in four decades of democratic rule. Luc André Diouf, who also migrated from Senegal, also won a seat in Spain’s Lower House in 2019.

At a lower, regional level, Mr. Mbaye wants to show that “Madrid is diverse.”

“That a Black person is running in the lists has surprised many. In that way, this is making many people think,” he said.

Vox, the country’s increasingly influential far-right party, has responded to Mr. Mbaye’s candidacy with an Instagram post vowing to deport him, even though that’s impossible because the far-left candidate is a Spanish citizen. With its mixture of patriotism and populist provocation, Vox has become the third force in the national parliament and might emerge as the kingmaker in Madrid’s May 4 election.

“They are basically saying that because I’m Black there is no place for me here,” said Mr. Mbaye. “These are the kind of messages that criminalize us and that we continue receiving.”

Vox has also made waves with large subway ads citing inaccurate figures comparing Madrid’s alleged public spending on unaccompanied foreign minors with the alleged average stipend for a retiree. The party blames the minors – a total of 269 people in the region’s population of 6.7 million – for increased insecurity.

Judges have ruled that the billboards fall under free speech. But when Vox is accused by opponents of being racist, the party says its crusade is only against illegal migration and that a racist party wouldn’t have a mixed-race spokesman in northeastern Catalonia’s regional parliament. That’s Rafael Garriga, a dentist of Belgian and Equatorial Guinean descent.

“By surrounding themselves with what they see as some kind of respectability, they try to legitimize clearly racist speech while not crossing certain legal lines,” said Antumi Toasijé, a historian who heads the National Council Against Ethnic and Racial Discrimination.

The ascent of the far-right and the polarization in social media has normalized hate speech in Spain, he said.

The Black Lives Matter movement led last year to some of the largest protests against racism seen in Spain. But while many condemned the murder of Black citizens by police in the United States, few reflected on domestic racism or Spain’s own history of colonialism, slavery and, according to Mr. Toasijé, “a long tradition of attempts to conduct ethnic cleansing.”

In a country where the census doesn’t ask about race or ethnicity, like in much of Europe, a recent government study put the number of Black people in Spain at just over 700,000.

Mr. Toasijé’s own estimation elevates the figure to at least 1.3 million “visibly” Black people, including sub-Saharan Africans, Black Latin Americans, and Afro-descendants born in Spain. That would be 2.7% of the population, or at least nine Black lawmakers if the 350-seat Congress of Deputies reflected the country’s diversity. There is currently one Black lawmaker.

Still, quotas or other measures that would help address racial inequality aren’t even part of the debate, said Toasijé.

That underrepresentation also affects Spain’s Roma people, a community of 700,000 that scored a historic victory in 2019 by snatching four parliamentary seats, close to the 1.5% share it represents in the total population. But one of them failed to retain his seat in a repeated election.

The situation isn’t better for descendants of Latin Americans or Moroccans, who represent some of the largest groups of non-white Spaniards, or the more than 11% of foreign-born residents who can’t run in regional or national elections.

“It has a lot to do with education, because the main bottleneck is in access to universities, leaving low-paid and precarious employment like domestic work or harvesting, where there is rampant exploitation,” he said.

Barring sports figures and some artists, people of color are pretty much invisible in high-powered Spanish circles from academia to big business, said Mr. Gerehou, who just published a book on growing up as a Black person in a provincial northern Spanish capital.

His description is of a largely white country that considers itself non-racist and welcoming to migrants, even when numerous studies have captured rampant discrimination against people of color, especially in jobs or housing.

“The problem is that the debate of racial representation is still on the fringes,” Mr. Gerehou said. “We need to go much faster.”