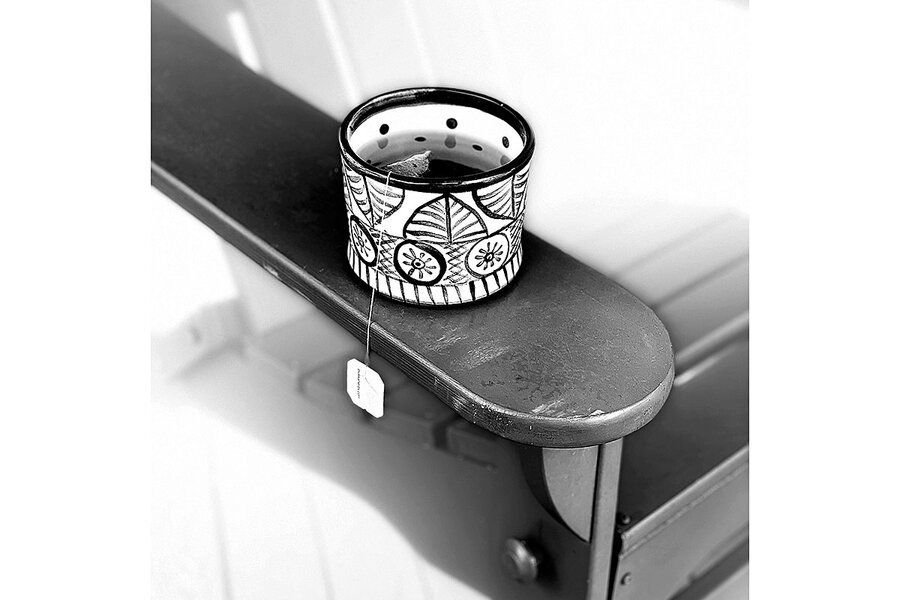 I’m not a tea person. I do keep a box of assorted teas on hand for company, and I’ve been known to indulge to be sociable, but it doesn’t do much for me. One day, though, feeling vaguely troubled, I pulled out the box.

Camomile is one of the herbal teas that gets left over after people have picked out their favorites. I gave the neglected camomile a sniff. It didn’t really smell like anything. According to the box, it promotes relaxation. So does a cup of hot water, which is what camomile tea most resembles. But then something happened.

I was transported. Transported to someplace very specific: Uncle Cliff’s grain silo. Uncle Cliff was a dryland farmer in North Dakota, where he had wrested wheat out of the soil since about 1920. Uncle Cliff was one of the best people ever. You can ask anybody.

Scents evoke memories. In the present day, it’s raining here – again. It’s been raining for five months; spring in the Pacific Northwest is basically more winter, with daffodils. But the aroma of the tea has summoned the silo, the toasty fragrance of hay from the loft, summer-dry grass in the yard, and gopher holes. Insects are buzzing, whining, and clicking.

I can almost make out the barn cats that slink around the silo and always show up at milking time to wait for Uncle Cliff to skim the skin off the top of the bucket and lob it at them – or just aim an udder. He never lost a drop, I know that.

There’s the pony they perched me on for a photo! My little legs stuck straight out to the sides. I was even too short for pond scum. When I leaned into the cows’ watering trough to scoop pond scum for a pond-scum pie, I pitched in headfirst, and Uncle Cliff flew across the yard to pull me out. I remember.

And then he gave me a basket to collect eggs right out of the chicken coop, as many as I could find! I tripped over the threshold to the house – running, I was so excited – and lost every one of the eggs. I burst into embarrassed tears, and the whole family – Grandma, Uncle Cliff, Mommy, and everyone – gathered me up while also laughing because I looked a sight, and it was no big deal to clean up eggs from a linoleum floor. There would be even more eggs tomorrow, if you can believe that.

Camomile tea has all that in it, and cowpies too. Cowpies are not so bad. They’re just more toasty hay with some modifications for portability. Uncle Cliff used to fling the cow flop that was close to the big red barn into a pit formed by the remnants of an old foundation, which was probably an earlier version of the barn.

I liked to use that foundation as a balance beam for fun, and one time – anyone could have predicted it – I tipped right over into the manure pile, and that provoked gales of laughter among the adults too: this little girl lurching across the yard, all smeared up and bristling with hay. But I still got plenty of hugs, even before being scrubbed in the washtub.

At Grandma’s house, you could never be in trouble. You can wear a pond-scum hat and be caked in poop, dipped in egg and rolled in the pasture, and everyone still thinks you’re good enough to eat. Everyone laughs as often as they can, and even if they’re laughing at you, it’s OK. And Grandma has wrinkly skin as soft as a tub of flour, and she loves you so, so much. She’s right here, in the steam.

There will always be troubles, and I won’t solve them all. But if I can bury my face in Grandma’s flowered apron, if I can be 6 again, just by drinking camomile tea, that’s what I’m going to do.