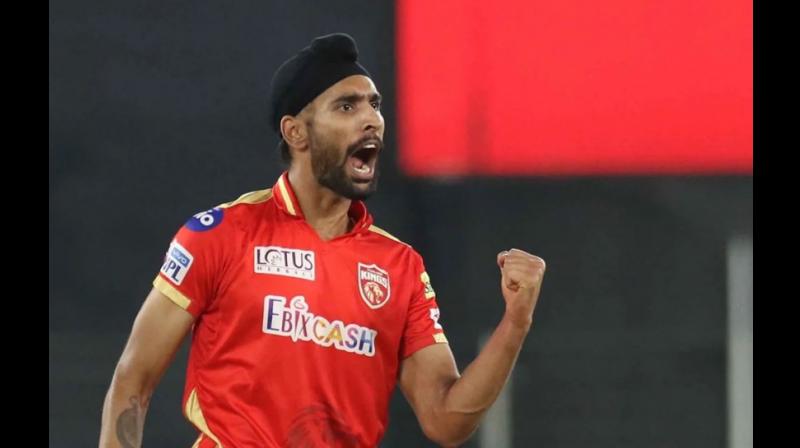 Nitish Rana, Harshal Patel, Arshdeep Singh, Avesh Khan and Harpreet Brar have caught the eye of cricket fans with their brilliant performance in IPL this year.

Harpreet was over the moon when his team, Punjab Kings XI, not only beat Royal Challengers Bangalore, he was able to grab the wicket of RCB and Team India captain Virat Kohli.

Harpreet was given the Man of the Match award for getting not only Kohli’s wicket, but also those of Glenn Maxwell (clean bowled, as was Kohli) and former South Africa captain AB de Villers.  “My first IPL wicket is Virat paaji and that helps,” says the 25-year-old slow left-arm orthodox bowler. Your body opens up, you get confident, and things fall into place", he revealed at the presentation ceremony.

Brar was congratulated by Kohli himself.
“They (parents) will be happy at home I’m sure. It’s their best wishes that have got me here,” the young man said. Obviously, it was celebration time at the Brar home in Punjab.  “When the world’s best batsman (Kohli) pats your son’s back, what bigger moments can we dream of,” commented Brar’s father, Mohinder Singh, who was a police constable (driver) till last year.

“He had a dream to play in our State team. Initially, he was disappointed at not getting enough chances, and believe me, he once was so frustrated that he decided to leave the game and settle in Canada,” Mohinder said. (Harpreet’s sister, Raman Preet Kaur lives in Canada on a work permit.)

“Very happy for @thisisbrar! Getting wickets of some quality batsmen,” former India all-rounder Yuvraj Singh, who has followed the Punjab cricketer closely, tweeted. Interestingly, Brar is a fan of Yuvraj.  Brar’s left-arm spin bowling can be likened to that of Indian all-rounder Ravindra Jadeja’s, as it goes straight onto the stumps after pitching, deceiving the batsman into expecting a turn.

Arshdeep Singh has picked up seven wickets so far playing six matches for Punjab Kings (PBKS). The best thing about this left-arm seamer is that he always keeps the batsman guessing. His ability to hold the nerve under pressure is one of the highlights of his career. For someone with an economy around 8, the variations and the control in the bowling seem to be grabbing eyeballs. One of the reasons for his success is his ability to back his instincts.

Delhi Capitals (DC) fast bowler Avesh Khan is in the fray for the Purple Cap table. The youngster picked up 14 wickets and landed in the second spot in the race for the leading wicket-taker. Avesh has been a significant player for the team as he looked fitter than ever before to lead the Delhi pace attack.

While his bowling partner and South Africa pacer Kagiso Rabada is still taking his time to come to terms, Avesh has been giving Delhi the much-required fire power with his impressive spells.

Harshal Patel
Royal Challengers Bangalore’s (RCB) Harshal Patel tops the leading wicket-taker for the tournament with 17 wickets. The fast bowler, who is leading the race for the Purple Cap, has impressed everyone with his line and length. His five-wicket haul against Mumbai Indians, in his first game of the season, was what caught everyone’s attention. In fact, at an average of just over 15, he seems to be a promising talent.

Kolkata Knight Riders (KKR) opener Nitish Rana played a scintillating knock 80 runs off 56 balls against Sunrisers Hyderabad (SRH) to give his side its first victory in this IPL. The Delhi southpaw has an impressive strike rate of 142. The 27-year-old, who was awarded the man of the match, was instrumental in his team posting a comprehensive total of 187 runs.