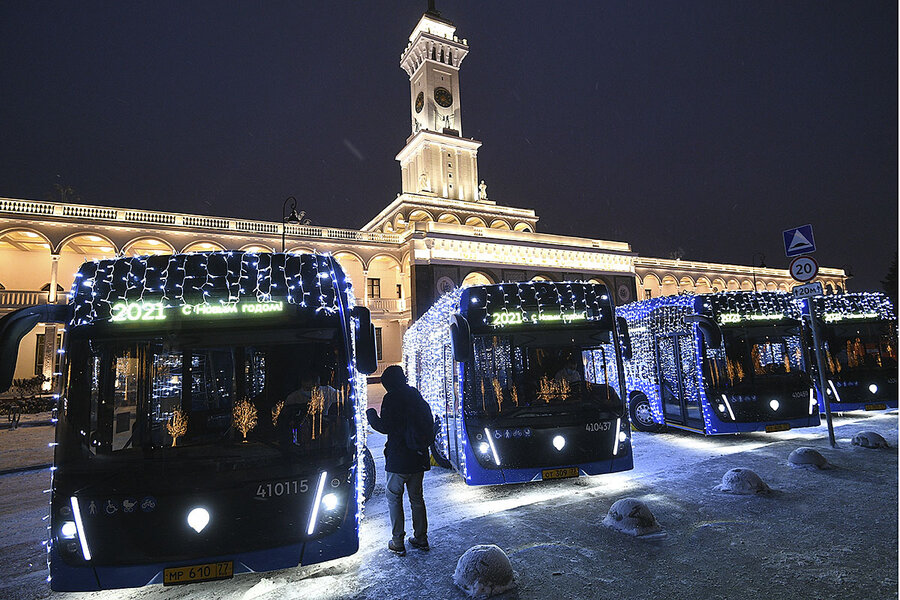 Few descriptions of Moscow, even by admirers, have ever called this huge, overpowering metropolis “user-friendly.”

Its efficient but crowded metro and choking traffic streams move its 12 million inhabitants every day, but somehow make getting from place to place an exhausting and demoralizing effort.

But all that has been rapidly changing over the past decade, as an activist mayor backed by a professional bureaucracy has channeled the city’s resources into huge public works programs.

Moscow’s efforts to fix the city’s terrible traffic highlight the priorities of a new generation of Russian bureaucrats – and the lack of input from any other Muscovites.

And lately the city’s urban planners have put on their green caps, replacing many of Moscow’s creaking old buses with brand new, Russian-made electric-powered ones, the largest such fleet in Europe. Their latest project is to construct a “green ring” of bicycle paths and hiking trails to connect the city’s giant parks, and also a network of bicycle lanes and parking areas throughout the city that will enable Muscovites to go to work, do their shopping or just get around by electric scooter or bicycle, much as people already do in modern European cities.

What makes this remarkable is that, unlike Western green programs, these initiatives are coming from the top, spawned by a largely unaccountable bureaucracy that faces little pressure from civil society or elected legislators.

Mayor Sergei Sobyanin is an elected figure, but elections for the largely toothless city council in 2019 were so severely limited by official manipulations that they triggered mass protests that went on for weeks. Though Moscow does have a small but active civil society sector, recent campaigns to halt a luxury housing development in a historic brewery and to prevent artists from being evicted from their formerly protected city-provided studios have been handily ignored by city planners.

Dmitry Oreshkin, head of the Mercator group, a liberal think tank, says that in general a post-Soviet generation of well-traveled, fitness-conscious Russians are coming into their own, and even if it’s not quite democracy in action, officials know they have to respond to changing public needs if they want to keep their jobs.

“Mayor Sobyanin, with all his defects, knows what he has to do. He had a taste for innovation even before he became mayor, and now he is focusing on ecology, the European tendency to promote bicycles over cars, to make the city center more livable and the air cleaner. … It’s his job, and he’s doing it.”

The new bicycle lanes, which will make the entire city accessible by bike within five years, should complement new traffic rules that make it harder to drive cars downtown and almost impossible to find a parking spot. It will also be a huge boon for thousands of food delivery workers, whose numbers have ballooned since the pandemic, and who are a ubiquitous sight as they struggle through traffic and careen down sidewalks, even in the dead of winter.

“We are responding to growing demand for cycling infrastructure, which has become much stronger since the pandemic,” says Anastasia Gracheva, a project leader at the Traffic Center of Moscow’s Transport Department. “Our main goal is to create the means that enable people to change their old habits toward green, healthful, and safe ways of getting around. This is not just for recreation, or only for the summer time. We see this as a practical, year-round option that people can rely upon.”

“Until recently city authorities were oriented toward the needs of automobile drivers, and they have built an impressive amount of new infrastructure for them,” says Alexei Sidorov, a member of a downtown cycling club. “But international experience has shown that bicycles can often be a better option.

“Statistics show that the average trip inside Moscow is less than five miles. If the infrastructure were in place to make it practicable and safe, a lot of people would choose to ride a bicycle or scooter rather than take the car. I am very glad if Moscow authorities have the political will to implement this.”

One factor driving the introduction of new green ideas into the Moscow civil service, which is dominated by middle-aged people, might be the influx of educated younger people who, until recently, did not find a bureaucratic career very attractive. Pay scales have improved a lot in recent years, experts say, and the chances to get hands-on experience with interesting new projects have multiplied.

“More and more younger people are coming into Moscow government lately,” says Ms. Gracheva, who fits that description herself. “I’ve traveled to Europe, and seen some very interesting examples. I have also read a lot about new ways to improve city life through green development. I really enjoy being part of that.”

“It’s not a praiseworthy model”

The green ring project is just one of many efforts that the Moscow government has rolled out to overhaul the city’s gridlock. In recent years it has relieved the city’s traffic problems with new expressways and flyovers, hugely extended the underground metro system, and introduced a new city-girdling rapid transport route and other innovations that have won global attention for Moscow. They have even streamlined the notoriously cumbersome bureaucratic machine that traditionally enveloped the average Russian in a web of red tape, bringing praise even from some staunch liberal critics of the government.

This form of urban government might be described as authoritarian technocracy, a Moscow-scale version of the system created by Vladimir Putin, who has also embarked on a nationwide program of infrastructure renewal, revamped public services, and technical modernization, which he updated in a major address in mid-April.

Some experts argue that while the unelected bureaucracies that run Russia no longer have a grand ideological justification for their hold on power, such as building communism, they are acutely aware of their lack of democratic legitimacy and thus devote themselves to public works for the sake of political survival.

“It’s not about transparency or legitimacy. This drive to improve things started after the cycle of major protests over fraudulent parliamentary elections in 2011,” says Nikolai Petrov, a senior researcher at Chatham House in London. “Officials recognized that there are growing demands from the creative class, the youth and others who want to live in a cleaner, healthier city. The message from the top is that you can have these improvements, but don’t try to do anything in politics.”

Mr. Petrov says it’s all very well when these big projects turn out to be beneficial, but that isn’t necessarily always the case, he argues. And he points out that there’s no public input on what sort of urban planning should go on – it’s all handed down from above, without public debate. “Moscow authorities do have a lot of money to spend. But if you asked average Muscovites whether they prefer that money to be spent on improving the pavements or something else, I have a feeling they might mention other priorities,” since the plans have never been tested in a democratic election.

“The city’s leadership is making Moscow into the showcase of a modern authoritarian state. They’re sure they know what they are doing, and they don’t need to listen to ordinary inhabitants. It’s not a praiseworthy model.”

Still, those like Dmitry Mendeleyev, a scientist who bikes about 10 miles to work every day, whatever the weather, says they’re happy with the modernization projects in Moscow.

“Just a couple decades ago a cyclist on the streets of Moscow looked like a freak, and a suicidal one at that,” he says. “Ten years ago it was still an unusual sight. Now you see people on bicycles all over the place, and soon it will be the most normal form of transport.”