Local sources said the incident happened after 10pm local time (4am BST). Members of the public who were in the area helped the emergency services with their rescue efforts. Shocking video footage showed the moment the collapse took place, as cars were seen travelling under the suspended bridge when it suddenly cracked and the train fell through into the traffic.

Eyewitnesses at the scene shared dramatic footage and photographs of the incident as two train carriages were seen hanging over the rubble of the collapsed structure.

Other videos posted on Twitter showed a crowd of people watching on as rescue teams scrambled to help those injured.

One man participating in the rescue efforts was pictured using an extension ladder to reach the window of one of the train cars.

Mexico City’s mayor, Claudia Sheinbaum, announced on Twitter she was on her way to the scene of the incident. 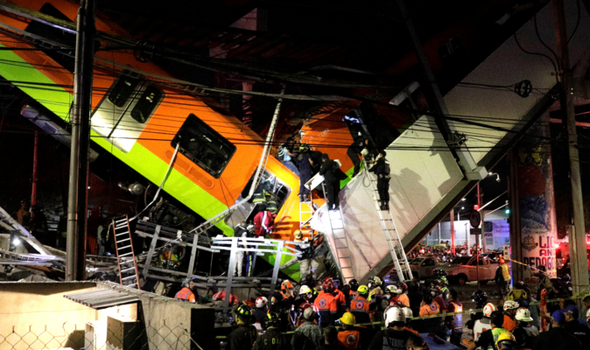 However, she added the rescue had been suspended “because the train is very weak”.

Ms Sheinbaum added it was not yet clear what had caused the collision.

She said: “At this moment, we can’t speculate about what happened. 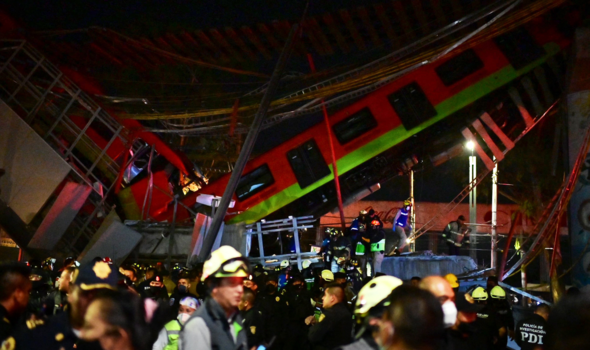 Local media also reported a number of children were among those injured in the crash.

An emotional mother said she was searching for her 13-year-old son, who had been out with friends in the city centre and had been travelling home on the metro.

She told Azteca Noticias, a television channel: “I spoke five minutes ago with him.

“He said that he was about to arrive.”

She then begged the authorities to “give me back my son.”

Moments later, she arrived and described the sight of fire brigades and medical workers.

She added that several hospitals were tending to those injured and that there had been fatalities.

Ms Sheinbaum retweeted a post shared by the city’s civil protection services, which said 70 people had been injured.

The tweet added that people were being taken to diverse hospitals, including Magdalena de las Salinas and Belisario Domínguez.

She said seven of the people transported to hospital were in a “grave condition” and undergoing surgery.

Ms Sheinbaum later told news outlets at the scene that “so far we have 15 people who unfortunately lost their lives”.

She also added that more were believed to be trapped.

The Metro 12 line that runs over the collapsed overpass was built almost a decade ago when Foreign Minister Marcelo Ebrard was mayor of Mexico City.

He wrote on Twitter: “What happened today with the Metro is a terrible tragedy.

“My solidarity is with the victims and their families.

“Of course, the causes must be investigated and responsibilities defined.”

Over the last few years, other derailments and crashes have taken place on Mexico City’s subway system.

The subway system sees more than four million passengers using it in a day and it is the second-largest in the Americas, being beaten only by the one in New York City.

Last March, one person was killed and at least 41 others were injured after two subway trains crashed on the line.

Ms Sheinbaum said at the time that one of the trains had accidentally backed into the other.

Another derailment in 2018 through a suburb of Mexico City also took place after a train carrying cargo ran off the tracks, which caused one of its cars to crash into a house, leaving five people dead.