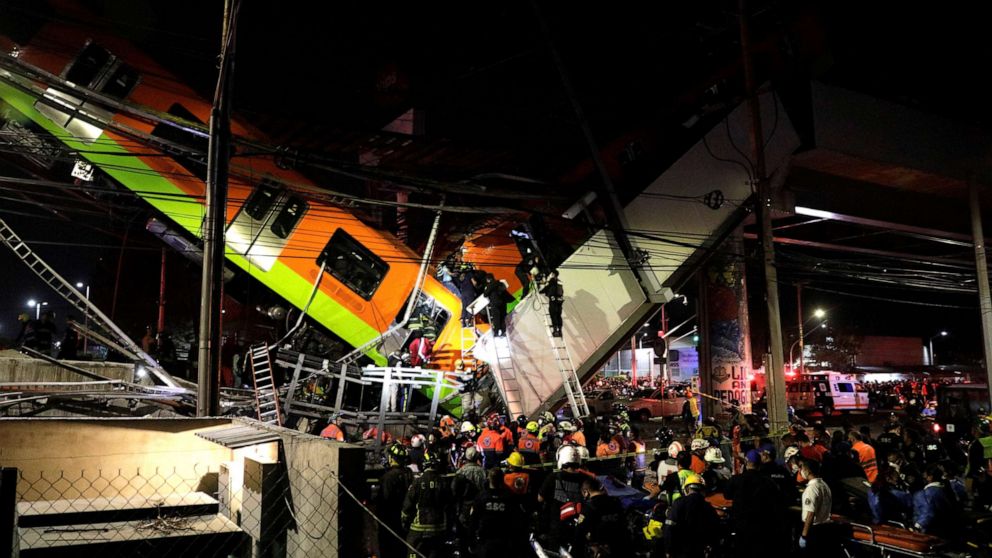 At least 23 people were killed and dozens more were injured after an overpass for the Mexico City Metro collapsed on Monday night, sending a subway car plunging toward a bustling boulevard below.

The collapse occurred on the newest of Mexico City’s subway lines, Line 12, which runs underground through more central areas but then emerges onto elevated structures along the outskirts. A support beam “gave way” just as the train passed over it, according to Mexico City Mayor Claudia Sheinbaum.

Footage from the scene shows a crane working to hold up one subway car left hanging from the collapsed section of the overpass, with various cars buried under the rubble on the road about 16 feet below. Rescue workers were checking to see if anyone was still trapped inside the train, Sheinbaum said.

“We don’t know if they are alive,” the mayor said at a press conference early Tuesday.

At least 49 of the approximately 65 people injured were transported to hospitals, including seven who were in serious condition and undergoing surgery, according to Sheinbaum

“There are, unfortunately, children among the dead,” she said, without specifying how many.

Mexico City Attorney General’s Office has opened an investigation into the incident.

Authorities will inspect the rest of the subway line near where the collapse happened later Tuesday morning.

“This is an unfortunate and serious accident,” Sheinbaum said. “We will report the truth.”

Mexican Foreign Relations Secretary Marcelo Ebrard, who was Mexico City’s mayor from 2006 to 2012, when Line 12 was built, called the incident “a terrible tragedy.” Soon after Ebrard left office as mayor, the subway line became plagued by structural issues, technical faults and corruption allegations, leading to a partial closure in 2013 so tracks could be repaired.

“Of course, the causes should be investigated and those responsible should be identified,” Ebrard wrote on Twitter. “I repeat that I am entirely at the disposition of authorities to contribute in whatever way is necessary.”

William and Harry will not walk side by side at Prince Philip’s funeral, no military uniforms worn