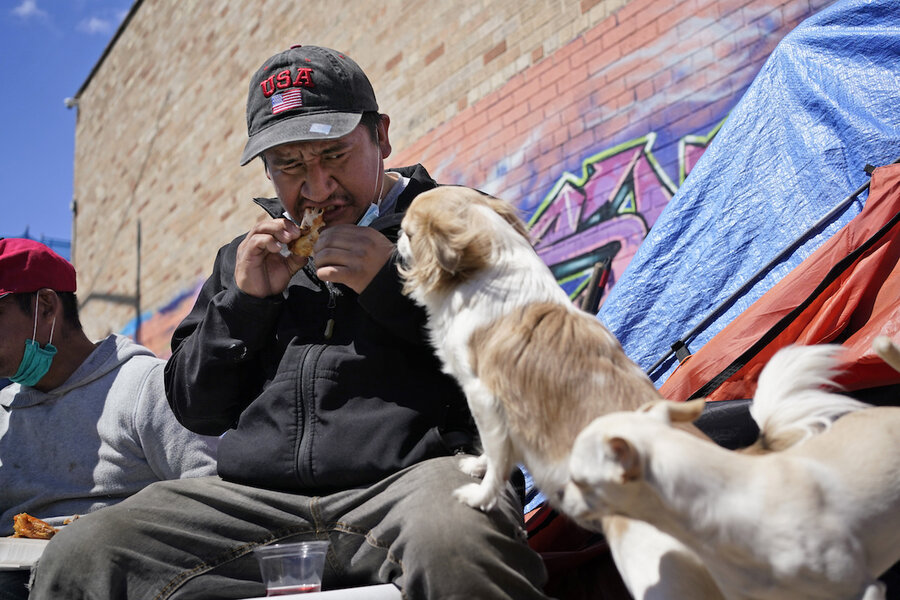 Sotero Cirilo sleeps in a small blue tent under a train track bridge in Elmhurst, Queens.

The immigrant from Mexico used to make $800 per week at two Manhattan restaurants, which closed when the COVID-19 pandemic started. A few months later, he couldn’t afford the rent of his Bronx room, and afterward, of another room in Queens he moved into.

“I never thought I would end up like this, like I am today,” he said in Spanish, his eyes filling up with tears.

Mr. Cirilo, who mainly speaks an indigenous language called Tlapanec, is part of an increasing number of unauthorized immigrants who are falling through the cracks due to the coronavirus pandemic, some advocates and nonprofits say. They worked in hard-hit industries – such as restaurants, hospitality, or construction – and lack of income has impacted their ability to afford food and rent, pushing some out of their homes.

Unemployment among Hispanic immigrants has doubled in the United States, going from 4.8% in January 2020 to 8.8% in February 2021, according to the Migration Policy Institute. These numbers don’t take into consideration immigration status but activists and social workers in states like New York or California say more vulnerable immigrants, who often don’t qualify for aid, are finding themselves without a home.

“I have seen an increase of encampments of immigrants experiencing homelessness in Queens. Each has five or six tents,” said Yessenia Benitez, a licensed clinical social worker who helps these groups.

“Right now, they are adapting by collecting bottles [for recycling] but they are working folks. They want to contribute to society. And before the pandemic, they were contributing to society, some of them were paying taxes,” said Ms. Benitez.

In Los Angeles, The Coalition for Humane Immigrant Rights has seen a “significant increase” of calls to a hotline of assistance for immigrants over the last six months, said Jorge-Mario Cabrera, the spokesman for the organization.

“We have seen an increase in calls from individuals living in the street, living in cars, living in garages, or often living with friends in already overcrowded conditions,” said Mr. Cabrera.

“They don’t even have money to pay for their phone bills. This is why we are saying that one of the side effects of the COVID-19 [pandemic] is in fact a complete unraveling of the safety net for undocumented immigrants,” he added. “While other communities are receiving [financial] assistance, immigrants are receiving nothing, most of the time.”

Mr. Cabrera said many of the immigrants calling are essential workers whose income has been “drastically reduced.”

In New York, Mr. Cirilo’s tent is next to others that Ms. Benitez bought for several homeless immigrants that set up the Elmhurst encampment in September.

Recently, the group sat on top of milk grates and talked below a wall painted with colorful graffiti. Next to the tents, there are backpacks, blankets, and bags full of empty bottles and cans for recycling. Three small dogs laid next to the men, accepting their gentle pats.

Alfredo Martínez’s tent is green. Also a Mexican immigrant, Mr. Martínez used to work in construction but his hours were reduced when the pandemic started. Lack of steady income increased tensions with a roommate and he ended up in the street, where he has lived for the last four months.

Mr. Martínez now works sporadically as a day laborer and is hoping to save enough to rent a room and also afford the 40-hour Occupational Safety and Health Administration training course he says he needs to have more steady construction employment.

“The pandemic started and my world came crashing down,” Mr. Martínez said. “This is the first time something like this happens to me. But I think it is temporary. I hope it is temporary.”

Among refugees waiting to enter the U.S. – a classification of highly documented and vetted immigrants – there was a flash of good news as the Biden administration lifted an intake cap of 15,000 set by former President Donald Trump. Mr. Biden on Monday formally raised the nation’s cap on refugee admissions to 62,500 this year, weeks after facing bipartisan blowback for his delay in replacing the record-low ceiling Mr. Trump.

Refugee resettlement agencies have waited for Mr. Biden to quadruple the number of refugees allowed into the U.S. this year since Feb. 12, when a presidential proposal was submitted to Congress saying he planned to do so.

But the presidential determination went unsigned until Monday. Mr. Biden said he first needed to expand the narrow eligibility criteria put in place by Mr. Trump that had kept out most refugees. He did that last month in an emergency determination. But it also stated that Mr. Trump’s cap of up to 15,000 refugees this year “remains justified by humanitarian concerns and is otherwise in the national interest,” indicating Mr. Biden intended to keep it.

That brought sharp pushback for not at least taking the symbolic step of authorizing more refugees to enter the U.S. this year. The second-ranking Senate Democrat, Dick Durbin of Illinois, called that initial limit “unacceptable” and within hours the White House made a quick course correction. The administration vowed to increase the historically low cap by May 15 – but the White House said it probably would not hit the 62,500 Mr. Biden had previously outlined.

In the end, Mr. Biden returned to that figure.

Back in New York, according to a city government report, there are approximately 476,000 unauthorized immigrants in the city. The Mayor’s Office of Immigrant Affairs estimated in the report that 60% of unauthorized workers have already lost their job or are at risk of losing their job during the pandemic, compared to 36% of all workers.

Immigrants in the country illegally can’t access stimulus help or unemployment benefits even if they pay taxes. Some cities and states have, however, pushed efforts to help.

California gave some cash to unauthorized immigrants last year and New York lawmakers recently created a $2.1 billion fund to aid workers who lost jobs or income during the pandemic but were excluded from other government relief programs because of their immigration status. The program is the largest of its kind in the U.S.

In Arizona, advocacy groups say immigrant women who clean hotel rooms are suffering financially and things got harder for them with schools closed and kids at home.

Spokespeople at the U.S. Department of Housing and Urban Development said they had no data they could provide now on the impact of the pandemic on homelessness.

Mr. Cirilo, the  Mexican experiencing homelessness in Elhmurst, Queens said he hopes to move back to his native country one day.

“My children have asked me to go back,” he said. “But I can’t go back like this.”

Welcome to the euphoria economy

On the Supreme Court docket: Fairness, textualism, and crack cocaine