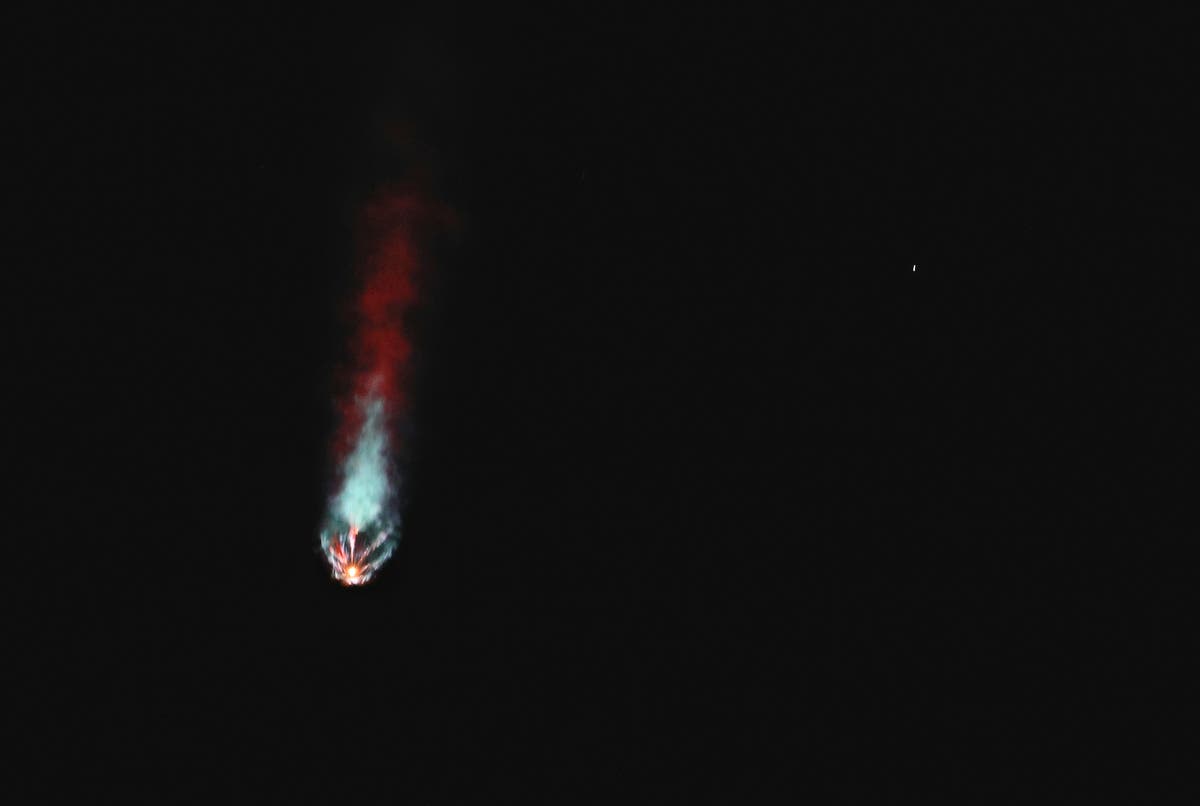 SpaceX has successfully launched four astronauts into space onboard a recycled rocket.

The Crew-2 mission is the third time that Elon Musk’s rocket company has sent Nasa’s astronauts into space.

The four astronauts – from three different countries – will now travel to the International Space Station to begin a six month stay.

It is the first time that a recycled rocket has ever been used from a previous spaceflight, with the Falcon 9 having made the same flight in November on SpaceX’s second astronaut flight. The Dragon Capsule that housed the astronauts was also recycled, from the first ever crewed mission in May.

One of the astronauts on board, Megan McCarthur, was actually sat in the exact same seat her husband did during that initial test flight.

She was joined by fellow Nasa astronaut and commander Shane Kimbrough as well as Japan’s Akihiko Hoshide and France’s Thomas Pesquet, the first European to launch in a commercial crew capsule.

“Glad to be back in space,” Kimbrough radioed once the capsule was safely in orbit.

“Just spectacular,” said NASA’s acting administrator Steve Jurczyk.A masked Musk met briefly with the astronauts at NASA’s Kennedy Space Center before they boarded white gull-winged Teslas from his electric car company. The astronauts’ spouses and children huddled around the cars for one last “love you” before the caravan pulled away and headed to the pad in the predawn darkness.

“From now on, I’ll see you on a screen!” tweeted Pesquet’s partner, Anne Mottet.

Despite the early hour, spectators lined surrounding roads to watch the Falcon take flight an hour before sunrise. Liftoff was delayed a day to take advantage of better weather along the East Coast in case of a launch abort and emergency splashdown.

NASA limited the number of launch guests because of COVID-19, but SpaceX‘s next private passengers made the cut. Tech billionaire Jared Isaacman, who’s bought a three-day flight, watched the Falcon soar with the three people who will accompany him. Their capsule is still at the space station and due back on Earth with four astronauts next Wednesday. It will be refurbished in time for a September liftoff.

For Friday’s automated flight,SpaceXreplaced some valves and thermal shielding, and installed new parachutes on the capsule, named Endeavour after NASA’s retired space shuttle. Otherwise, the spacecraft is the same vehicle that flew before.

“We’re thrilled to have a crew on board Endeavour once again,”SpaceXLaunch Control radioed just before liftoff.

All four astronauts clasped hands as Kimbrough noted it was the first time in more than 20 years that U.S., European and Japanese astronauts had launched together.The first-stage booster touched down on an ocean platform nine minutes after liftoff.

Rapid reusability is critical to Musk’s effort to open space to everyone, land NASA’s next moonwalkers and, his loftiest goal by far, build a city on Mars.

Musk will go a long way toward achieving that first objective with the private flight in September. It will be followed in October bySpaceX‘s fourth crew launch for NASA.

SpaceXpicked up the station slack for NASA after the space agency’s shuttles retired in 2011, starting with supply runs the following year. The big draw was last year’s return of astronaut launches to Florida, after years of relying on Russia for rides.

Boeing, NASA’s other contracted crew transporter, isn’t expected to start launching NASA astronauts until early next year. First, it needs to repeat a test flight of an empty Starliner capsule, possibly in late summer, to make up for its software-plagued debut in December 2019.

Last week,SpaceX beat out two other companies, including Jeff Bezos’ Blue Origin, to land astronauts on the moon for NASA in three or more years. They’ll descend to the lunar surface in Starship, the shiny, bullet-shaped rocketship that Musk is testing in the skies over Texas, with fiery, explosive results.

The space station eventually will come to an end, he noted, but the partnership will continue amid hopes of “European astronauts one day walking on the surface of the moon.”