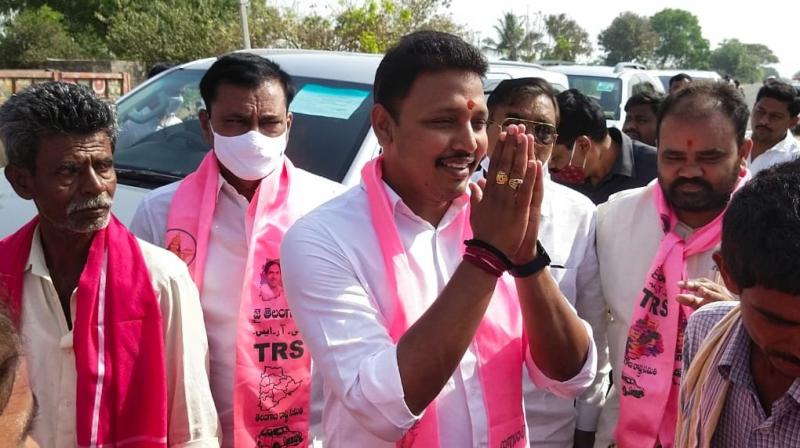 Bypoll for the constituency was necessitated following the death of TRS' sitting MLA Nomula Narsimhaiah. The TRS fielded his son Nomula Bhagath against Congress candidate Jana Reddy in the bypoll. Bhagath has registered an early lead as the counting of votes began on Sunday morning. The TRS maintained its lead right from the first round till the 25th round. Bhagath was leading over Jana Reddy from the first round and all other rounds thereafter till the 25th round of counting except for 10th, 11th, and 14th rounds. While Jana Reddy remained in the second position, the BJP candidate Ravi Naik had to bite the dust in the bypoll.

It may be recalled that Jana Reddy lost from Nagarjunasagar constituency to TRS candidate Nomula Narsimhaiah by 7,774 votes in the 2018 Assembly elections. However, the Nagarjunasagar bypoll was necessitated following the sudden demise of Narasimhaiah. The polling was held on April 17.

The counting of votes began at 8 am on Sunday. Earlier, officials shifted the EVMs to the counting halls from the strong rooms in Telangana State Warehousing Corporation at Arjala Bavi in Nalgonda.

Though the seven-time MLA and former minister Jana Reddy went all guns blazing and campaigned with the slogan 'Save Democracy', he had to face the defeat.  The BJP fielded a young doctor-turned-politician and debutant, Dr Panugothu Ravi Kumar Naik, who belongs to a tribal community and yet contested in an unreserved constituency, a fact which the party highlighted during its campaigning.