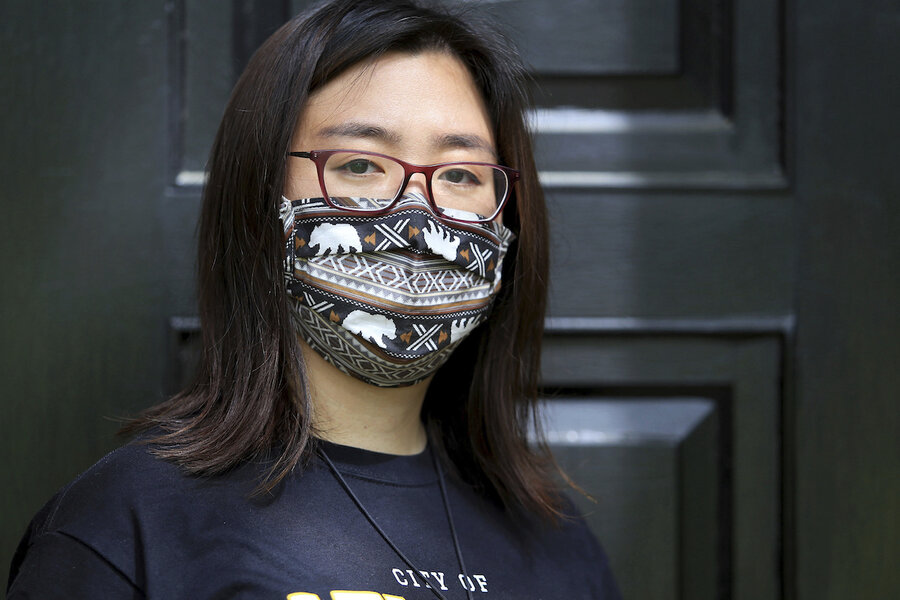 The fatal shootings of eight people – six of them women of Asian descent – at Georgia massage businesses in March propelled Claire Xu into action.

Within days, she helped organize a rally condemning violence against Asian Americans that drew support from a broad group of activists, elected officials, and community members. But her parents objected.

“‘We don’t want you to do this,’” Ms. Xu recalled their telling her afterward. “‘You can write about stuff, but don’t get your face out there.’”

The shootings and other recent attacks on Asian Americans have exposed a generational divide in the community. Many young activists say their parents and other elders are saddened by the violence but question the value of protests or worry about their consequences. They’ve also found the older generations tend to identify more closely with their ethnic groups – Chinese or Vietnamese, for example – and appear reluctant to acknowledge racism.

That divide makes it harder to forge a collective Asian American constituency that can wield political power and draw attention to the wave of assaults against people of Asian descent in the United States since the coronavirus pandemic began, community leaders say.

“In our original countries, where our ancestors came from, they wouldn’t even imagine that someone from Bangladesh would be lumped in the same group as someone from Laos,” said Angela Hsu, president of the Georgia Asian Pacific American Bar Association.

But those differences obscure a shared experience of “feeling like we’re constantly thought of as being foreign in our own country,” said U.S. Rep. Andy Kim, of New Jersey.

Much of the recent violence against Asian Americans has targeted the elderly, and some seniors have attended rallies to condemn it. But Cora McDonnell, 79, said she did not want to speak out, though she is now scared to walk to the church blocks from her Seattle home.

She emigrated to the U.S. from the Philippines in 1985 and said her culture was “more respectful.”

“You talk maybe in your family, but not really publicly,” she said. “You don’t really blurt out things.”

Lani Wong, 73, said she understood that feeling, though she does not adhere to it.

“Just don’t stir the pot, don’t get involved,” said Ms. Wong, chairwoman of the National Association of Chinese Americans. “I think that was the mentality of the older generation.”

Some young Asian Americans said they were frustrated by family members’ reactions to the shootings.

E. Lim said it was “infuriating and really sad” to hear her parents cast aspersions on the massage work done by some of the Georgia shooting victims.

“It’s almost like this desperation for denial so that they don’t have to recognize that there is a world that hates them,” said Ms. Lim, organizing and civic engagement director for Asian Americans Advancing Justice-Atlanta.

A pastor in the Atlanta area, Tae Chin, said his Korean mother-in-law also questioned the victims’ line of work while urging him not to focus on race. Four of the slain women were of Korean descent.

“‘Just work hard. Just live. Just be a good person, and they’ll see someday,’” Mr. Chin recalled her saying on a phone call after the March 16 attack. “I’m like, ‘That’s why we have this problem to begin with, because that’s exactly what we do.’”

Allison Wang’s parents were similarly inclined and thought she was wasting her time protesting the shootings.

“I think they believe that it’s more important to focus on your career and family and don’t really feel like we can make a difference,” said Ms. Wang, who helped Ms. Xu put together the rally in downtown Atlanta.

For Raymond Tran’s family, the political history of one of their home countries played a role in opposing his involvement in any organizations. The attorney raised in Los Angeles said that when he was growing up, his parents told him about an uncle imprisoned and tortured by Vietnamese communists after joining a student group.

Racist policies in the U.S. strictly limited immigrants from Asia until the 1960s, so many Asian families have been in the country for only a generation or two. It’s not unusual for new immigrants to focus on providing for their families, avoiding attention in favor of assimilation.

Asian immigrants face the added burden of the “model minority” stereotype that portrays them as industrious, law-abiding and uncomplaining, and ascribes their achievements to those traits, historians and advocates say.

“It divides generations,” said Maki Hsieh, CEO of the Asian Hall of Fame, a program that honors Asian leaders. “It divides Asians from each other, and ultimately it divides them from other groups.”

Ms. Xu said her parents worried about her safety, but she thinks their objections to her activism also stemmed in part from a desire to avoid trouble. They understood the need to speak out against anti-Asian violence but didn’t want her to do it, she said.

“I wholeheartedly believe if this is the way everybody thinks, then there won’t be any progress,” she said.

The younger generation is also coming of age during a period of renewed racial awareness – reflected in last year’s Black Lives Matter protests – that makes it impossible for Asians in the U.S. to “fly under the racial radar anymore,” said Nitasha Tamar Sharma, director of the Asian American Studies program at Northwestern University.

In addition to holding rallies and vigils across the country in the wake of the Georgia shootings, young organizers have shared stories of racist encounters and used the hashtag #StopAsianHate to raise awareness about the dangers Asian Americans face.

“In America, we are all one,” said Ms. Hsu, the bar association president. “We are viewed in a similar way.”