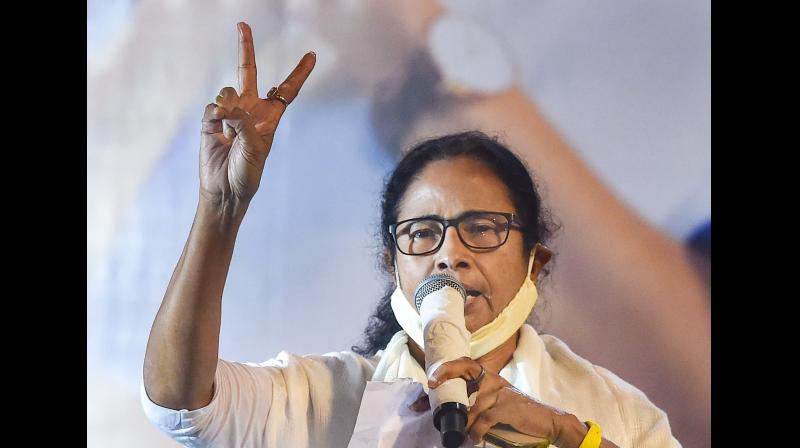 It was a nail-biting start as the BJP and Trinamul Congress moved neck and neck towards the finishing line as the counting began for the West Bengal elections early on Sunday morning. But by 10 am, the Trinamul Congress led by its firebrand chief Mamata Banerjee had dashed past by trampling all over the so-called formidable lotus brigade.

Confusion and controversy plagued the most-watched electoral battle in Nandigram. The Election Commission, which had earlier declared Ms Banerjee as the winner by 1,200 votes, later retracted and declared her former aide and BJP candidate Suvendu Adhikari as the winner by a margin of nearly 1,700 votes. Ms Banerjee, while accepting the verdict of the people, intends to move the courts against the Election Commission.

The Election Commission’s role in the West Bengal election has always been under the spotlight, ranging from its decision to hold eight-phase polls to its refusal to club the remaining four phases even as the Covid-19 cases and deaths spiked beyond control. A Trinamul delegation met the West Bengal EC late Sunday evening.

The BJP’s Bengal roar, “Ab ki baar, 200 par”, ended in a whimper as it struggled even to reach 80 seats. The TMC not merely crossed 200 but was moving in the direction of improving upon its 2016 tally of 211. The TMC, at this juncture, was leading in around 212 seats. Ms Banerjee's poll strategist Prashant Kishor claimed the BJP would “not have got even this number of seats without the help of the Election Commission”.

The fight for West Bengal was a battle between Prime Minister Narendra Modi and Mamata Banerjee. Making this election a prestige issue, the BJP had put all its eggs into the Bengal basket. Not only had the BJP parachuted all its top heavyweights from across the country, Union home minister Amit Shah virtually camped in the state and the Prime Minister held a staggering number of over 20 rallies.

Undeterred by the BJP powerhouse, the TMC raised the slogan “Khela Hobe”, and Mr Modi countered it by saying “Khela Shesh”. However, Ms Banerjee made his words come true, but for the BJP, not the TMC.

The results clearly indicated the so-called anti-incumbency factor against the TMC existed only in the BJP’s poll propaganda. This is the third consecutive victory for the TMC supremo.

The West Bengal results could have a major impact on national politics. Following this historic win, Ms Banerjee has emerged as the Opposition’s tallest face against the Narendra Modi government. The Opposition parties might now decide to rally behind the Trinamul supremo.

All eyes would be now on the forthcoming Uttar Pradesh Assembly polls, where the Yogi Adityanath administration was in the eye of the storm after the spiralling Covid-19 cases and deaths in the state.

In other states, the results were on the expected lines. While the BJP was moving towards retaining Assam, the DMK is all set to trounce the ruling AIADMK in Tamil Nadu and the LDF led by the CPI(M)’s Pinyari Vijayan was set to create history by returning to power in Kerala.

If the collapse of the Left seemed complete in West Bengal, where the Sanjukta Morcha (Left-Congress-Indian Secular Front) was struggling to open its account, the Congress, led by Rahul Gandhi, seemed to be at the political crossroads all over again.

The Congress not merely lost in Assam, but also paid a heavy price for its electoral miscalculation of aligning with the Left parties as well as the Indian Secular Front in West Bengal. The party also lost in Rahul Gandhi’s new home turf, Kerala. The only face-saver for the Congress was its move to hitch a ride on the winning DMK’s wagon in Tamil Nadu.

The West Bengal verdict was one against the highly polarised, divisive and communal campaign unleashed by the BJP. The BJP openly played the religion card, talked about Hindu pride, with the home minister even declaring the “Jai Shri Ram” slogan was a “symbol of anti-appeasement politics” and the BJP leaders went around saying “if the TMC returned to power, it would turn Bengal into Pakistan”.  The PM, addressing rallies, said while referring to Ms Banerjee: “You, get irritated by the chants of Jai Shri Ram, but you’ll now have to hear chants of Har Har Mahadev.”

The divisive campaign not only led to a complete consolidation of the Muslim vote in the TMC’s favour, but, stunning the saffronites, even the majority of Bengali Hindu bhadraloks didn’t vote for the BJP. What also offended Bengali sentiments was the PM’s taunts against the CM when he mocked her as “Didi o Didi”. UP chief minister Yogi Adityanath’s harping on “love jihad” and the promise to introduce “anti-Romeo squads” in West Bengal also worked against the saffron party.

The BJP’s corruption charges against the Mamata Banerjee government fell by the wayside as the party not only admitted the allegedly “corrupt” dissident TMC leaders but also gave them tickets.

The final nail on the BJP’s Bengal coffin was the rapid rise of Covid cases and deaths. By the time the fourth phase was over, the Covid cases and deaths had spiralled out of control across the country. Bengali voters saw people dying in the thousands due to lack of oxygen and hospital beds. The Centre’s failure to provide relief did not sit well with the Bengali electorates. By the end of the fifth phase, the anger had turned towards the Centre. The Bengali middle class, which was initially leaning towards the BJP, began moving away. As a result, Ms Banerjee swept Kolkata, Howrah and many other urban areas. What had also enraged the people of West Bengal was the Election Commission’s refusal to club the remaining phases of the election even as Covid-19 cases and deaths shot through the roof.

At the end of the day, even though the BJP could not snatch West Bengal from the TMC, the party managed to emerge as its primary opponent.

The BJP has improved its tally from three to nearly 80 seats.  However, the problem with the BJP is that its voteshare compared to that of 2019 has come down, while the TMC’s share has gone up by five per cent. As for the CPI(M)-led Left, the less said is better. Its politics of opportunism shown by its alliance with a radical leader, Abbas Siddiqui, and his outfit, Indian Secular Front, had no takers.