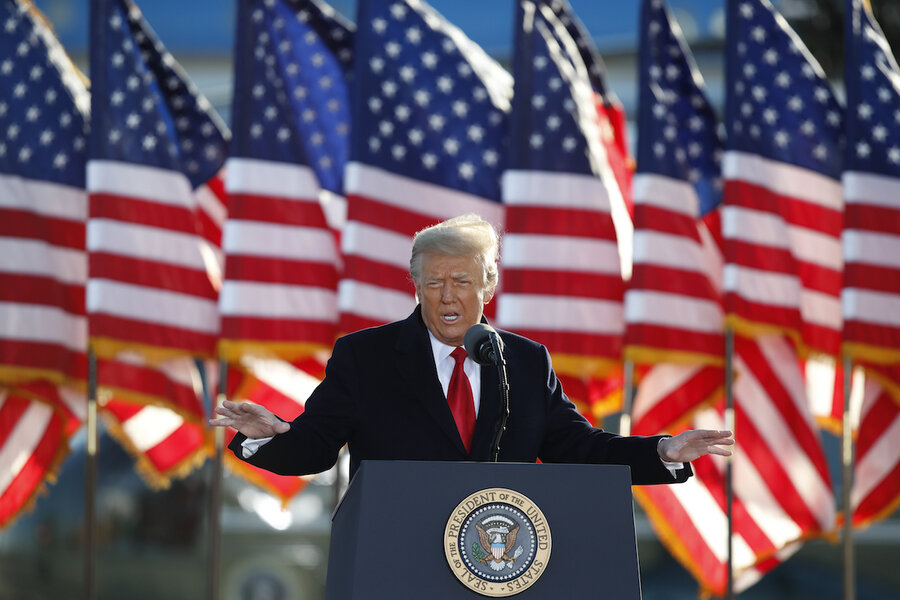 Since the day after the deadly riot at the Capitol on Jan. 6, Mr. Trump’s social media accounts have been silent – muzzled for inciting violence using the platforms as online megaphones. On Wednesday, Facebook’s quasi-independent Oversight Board voted to uphold his current ban from the platform, which was put into effect after his account was suspended four months ago for inciting violence that led to the deadly Jan. 6 Capitol riot.

But while upholding the suspension, the board faulted Facebook in a statement for the way it made the decision.

The board said the ongoing risk of serious violence justified Facebook’s suspension at the time, but said it “was not appropriate for Facebook to impose an ‘indefinite’ suspension.”

The board said Facebook was seeking to avoid its responsibilities by applying “a vague, standardless penalty” and then referring the case to the board to resolve.

“Indefinite penalties of this sort do not pass the international smell test,” oversight board co-chair Michael McConnell said in a conference call with reporters. “We are not cops, reigning over the realm of social media.”

Politicians, free speech experts, and activists around the world were watching the decision closely. It has implications not only for Mr. Trump but for tech companies, world leaders, and people across the political spectrum – many of whom have wildly conflicting views of the proper role for technology companies when it comes to regulating online speech and protecting people from abuse and misinformation.

Facebook created the oversight panel to rule on thorny content on its platforms following widespread criticism of its difficulty responding swiftly and effectively to misinformation, hate speech and nefarious influence campaigns. Its previous decisions so far have tended to favor free expression over the restriction of content.

“We love you. You’re very special,” he said to the rioters in the first post. In the second, he called them “great patriots” and told them to “remember this day forever.” Those violated Facebook’s rules against praising or supporting people engaged in violence, the board said.

Helle Thorning-Schmidt, a former Danish prime minister who sits on the board, said in the call that Facebook shirked its responsibility to enforce its own rules. “Facebook should either permanently disable Trump’s account or propose a suspension for a specific period of time,” she said.

Ms. Thorning-Schmidt said Facebook can’t just invent “new unwritten rules” for special users when it suits the company while everybody else has to follow their standards. “They did get it right, but they can’t have a penalty that’s indeterminate because that’s not in their own rules,” she said.

The board says Facebook has six months to reexamine the “arbitrary penalty” it imposed on Jan. 7 and decide on another penalty that reflects the “gravity of the violation and the prospect of future harm.”

It didn’t say exactly how Facebook should do this, but offered a number of recommendations. One advised against drawing a firm distinction between political leaders and other influential users because anyone with a big audience can potentially cause serious risks of harm.

Among the board’s recommendations is that considerations of a political leader’s “newsworthiness” shouldn’t take priority when the company must take urgent action to prevent harm. Facebook has said it didn’t consider newsworthiness in its Trump decision, but the board said there remains widespread confusion about Facebook’s handling of influential users.

The board also says Facebook should publicly explain the rules that it uses to sanction influential users, and emphasized the need for time-bound suspensions and clear rules on how they can be lifted.

The board says the new penalty must be “clear, necessary, and proportionate” and consistent with Facebook’s rules for severe violations.

The board says if Facebook decides to restore Mr. Trump’s accounts, the company must be able to promptly address further violations.

A Trump spokesman did not immediately respond to a request for comment.

Critics of Facebook worry that the Oversight Board is a mere distraction from the company’s deeper problems – ones that can’t be addressed in a handful of high-profile cases by a semi-independent body of experts.

“Facebook set the rules, are judge, jury, and executioner, and control their own appeals court and their own Supreme Court. The decisions they make have an impact on our democracies, national security, and biosecurity and cannot be left to their own in house theatre of the absurd,” Imran Ahmed, CEO Center for Countering Digital Hate, a nonprofit critical of Facebook, said the day before the ruling. “Whatever the judgement tomorrow, this whole fiasco shows why we need democratic regulation of Big Tech.”

The board, which has 20 members and will eventually grow to 40, did not reveal how it voted. It said a minority of members emphasized that Facebook should require users who seek reinstatement after being suspended to “recognize their wrongdoing and commit to observing the rules in the future.”

A day before the announcement, Mr. Trump unveiled a new blog on his personal website, “From the Desk of Donald J. Trump.” While the page includes a dramatic video claiming, “A BEACON OF FREEDOM ARISES” and hailing “A PLACE TO SPEAK FREELY AND SAFELY,” the page is little more than a display of Mr. Trump’s recent statements – available elsewhere on the website – that can be easily shared on Facebook and Twitter, the platforms that banished him after the riot.

While Trump aides have spent months teasing his plans to launch his own social media platform, his spokesman Jason Miller said the blog was something separate.

“President Trump’s website is a great resource to find his latest statements and highlights from his first term in office, but this is not a new social media platform,” he tweeted. “We’ll have additional information coming on that front in the very near future.”

Barred from social media, Mr. Trump has embraced other platforms for getting his message out. He does frequent interviews with friendly news outlets and has emailed a flurry of statements to reporters through his official office and political group.

Mr. Trump has even said he prefers the statements to his old tweets, often describing them as more “elegant.”

Tesla’s autopilot ‘easily tricked’ into driving with nobody in it

SpaceX has launched Nasa astronauts into space on a recycled rocket

The Marvel NBA broadcast and the coming sports cinematic universes