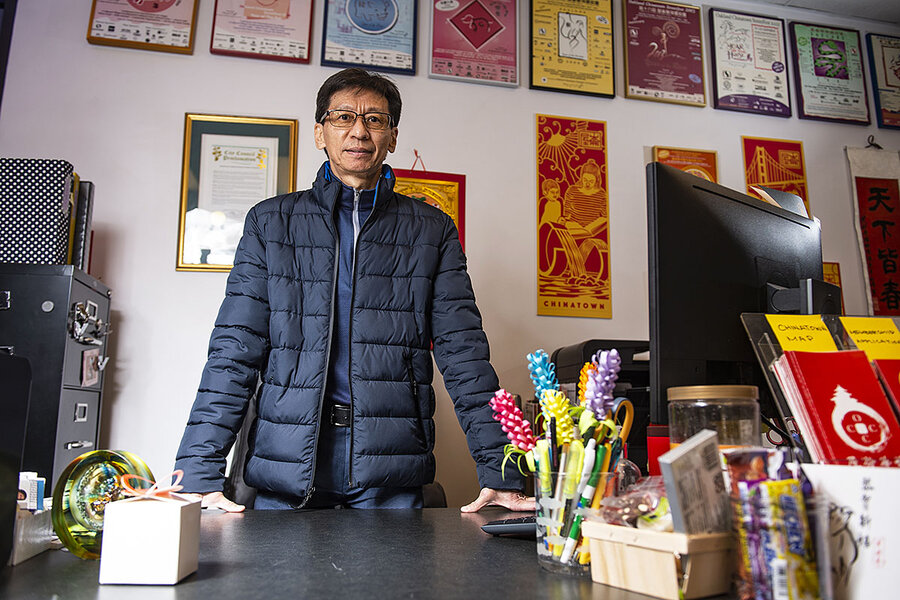 When reporters go on trips to dig into a subject, they return with notebooks full of stories. For any number of reasons, some good ones live the rest of their lives sealed between the cardboard covers of those notebooks, stored in a drawer until they are finally thrown out.

So it was with the backstory of Carl Chan. I spent well over an hour interviewing him for my recent cover story on the extraordinary grassroots effort in Oakland, California, to fight Asian hate in that city’s Chinatown. As president of the Chinatown Chamber of Commerce, Mr. Chan is in the thick of it, organizing rallies, raising money for security cameras, and fielding the chamber’s volunteer street patrol to protect seniors and others from physical and verbal attacks. He appeared prominently in my article, but his life-changing personal history went unused.

Until today. Because now this big-hearted man has become a story himself. On April 29, in broad daylight, Mr. Chan was punched in the head from behind and knocked to the sidewalk, his attacker yelling profanities and racial slurs. Mr. Chan, who was on his way to visit another assault victim, mustered the wherewithal to photograph his attacker and share the images with police. After police arrived, he spotted the attacker and ran after him, with police also in pursuit. Officers arrested the suspect, a 25-year-old, who was out on parole. He has since been charged with assault and battery, a hate crime, and parole violation.

Sometimes an event moves a supporting character onto center stage. When that happened recently to someone our reporter had interviewed, she seized the opportunity to shine a light on his heart and humanity.

I sent Mr. Chan a text of empathy and encouragement when I read about the incident on Monday. He texted back that he is “overwhelmed with the love and support.” He has received more than 10,000 messages, including texts, emails, letters, flowers, and calls from elected officials, law enforcement officials, religious leaders, reporters, friends, family, and people he doesn’t even know “from all over the world of all communities.”

Because statistics on hate crimes and aggressions against members of the Asian community are inconclusive, I wanted to gather anecdotal evidence during my March visit in Oakland to fill out the picture. I systematically asked people I interviewed whether they had ever had encounters with racism – during the pandemic or in their more distant past. Almost everyone had. When I asked Mr. Chan, he stopped to compose himself. Only one other reporter has ever asked him about this, he said. “Every time I talk, I try to hold my tears.”

And so in a windowless, gray conference room at the Oakland Asian Cultural Center in the heart of Chinatown, Mr. Chan unspooled his story of pain and promise, focusing on two foundational events that, he says, “changed my life.”

The first occurred as a middle school boy in British-governed Hong Kong, where he was born in 1958. It was summer, so the school kids were wearing white uniforms. As he crossed through a park to catch his bus home, he noticed five white British boys picking on a Hong Kong boy. “This is wrong! Don’t pick on him!” he told the boys.

Surely, he thought, if he spoke up, people around him would stand with him. But the Hong Kong boy ran away, and the British boys turned on him, calling him “Chinese pig,” repeatedly beating him, and standing on him. Each time he was thrown down, he stood up, but the beating continued until his uniform turned red and the boys lost interest. To his great surprise, bystanders were telling him not to fight back.

“When I was hearing my own people ridiculing me, saying, ‘You are stupid! You should just stay down,’ that’s when I was crying so bad.” He was not mad that he stuck up for the boy, “but I was so upset, unhappy, when I’m seeing my own people just stand and watch.”

When he got home, his mother was upset by what had happened to him – and also because public fighting could get him expelled. And surely, if the police had come, he would have been the one jailed, not the white boys. The next day, he received a stern lecture from a school official, with frank talk of expulsion. But when the student told his story, the official backed down, saying, “Next time, when you fight, I want you to win. Go home.”

And so he did. Eventually to a new home in the United States, where he and his mother and siblings legally joined his sister in California. Mr. Chan enrolled in Oakland Technical High School, where, for the first time in his life, he saw a video. It featured a Black man giving a speech.

“I had no clue who he was. I understood part of it. And I could feel most of it. The energy! Oh my gosh. Someone was talking to me. ‘I have a dream.’ That was so powerful.”

Mr. Chan says he felt as if Martin Luther King Jr. was almost telling his own life story. Dr. King was not speaking only to the Black community, but to the world, and this inspired the young Mr. Chan to do his best to make positive change.

And so he persists. Since the pandemic began, Mr. Chan has endured looks and name calling too numerous to mention. He sometimes has nightmares. But if anything, his resolve is stronger, and in his text, he said he was working to organize the May 15 Unity Against Hate rally in cities across America, including in Oakland.

“I am so proud of us standing together to fight the racial attacks against our community,” he texted. He signed off with a red heart emoji.