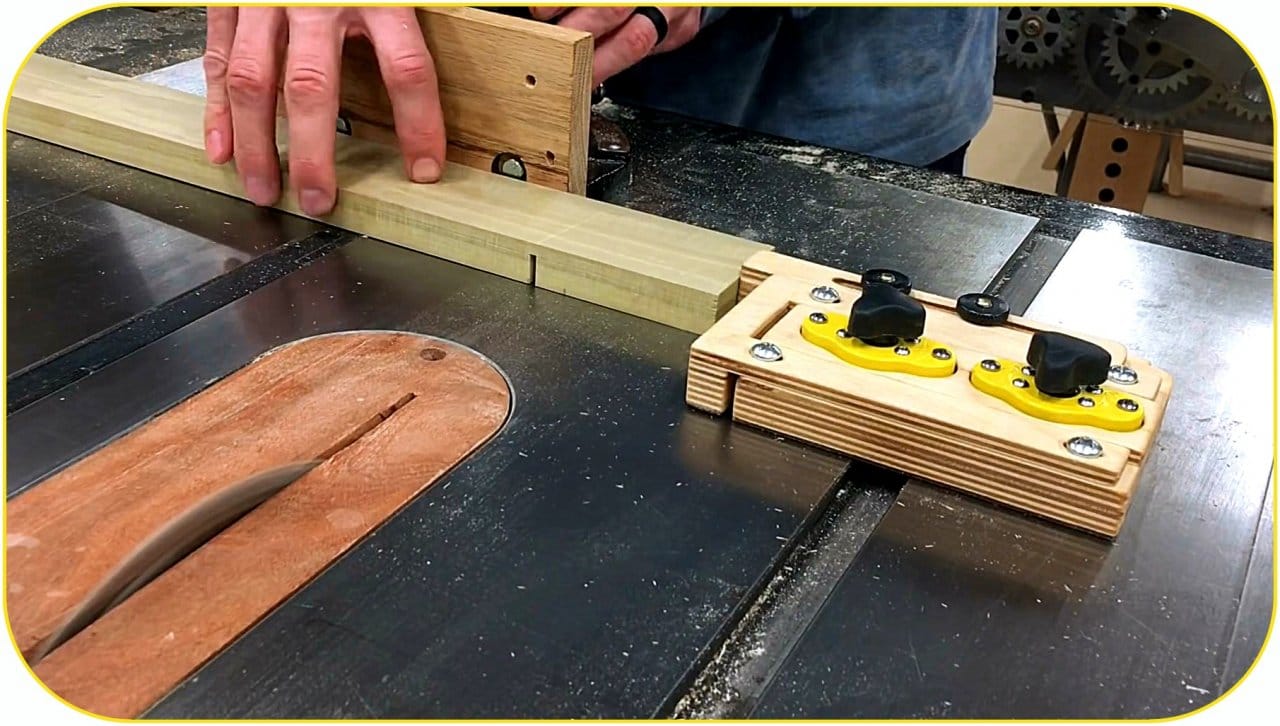 One of the primary and irreplaceable machines in the carpentry workshop is the circular saw. To the factory version, you almost always have to buy various devices that simplify operations with it.
One of the not very difficult, but requiring high accuracy of operations, is cutting grooves.
In this article, the author of the YouTube channel “Andrew Klein” will tell you how to make a quick-release stop to form the initial and final slots of the future groove. This fixture is equipped with switchable magnets , which allows you to quickly fix it in the right place on the sawing table, and remove it after work.
This project is simple enough to make, and it can be repeated in a small carpentry workshop.
Materials needed for homemade work.
– Switchable magnets
– Sheet plywood, board trimmings
– Wood screws, bolts, washers, wing nuts
– Linseed oil, wood glue, sandpaper.
Tools used by the author.
– Circular Saw, Miter Saw
– Blade Clamp for Circular Saw
– Drilling machine
– Drills for wood
– Forstner's drills
– Jigsaw, band saw
– Metal spring clips
– Screwdriver with a set of bits, chisels
– Tape measure, Svenson's square , pencil.
Manufacturing process.
First of all, the master cuts out the base from thick sheet plywood. The dimensions of both the base and the two moving elements will need to be selected depending on your goals and objectives. There are no complex details in the design, and it is quite simple to do it. 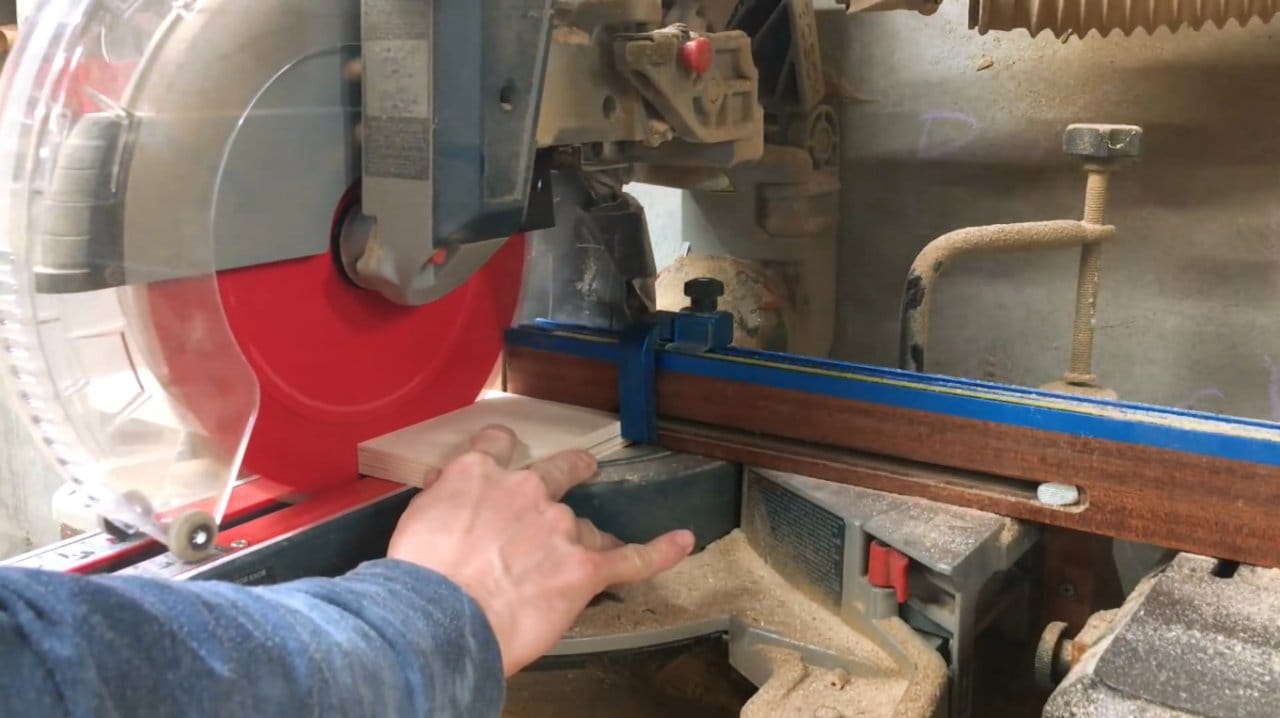 The main elements that allow fixing the device on the surface of a metal sawing table are switchable magnets . The cases of such magnets come in different shapes.
In this case, the master uses magnets with a cylindrical body, for which two holes are prepared in the base. This operation is performed on a drilling machine using a Forstner drill. The workpiece must be fixed in the machine vice, otherwise it will turn, and you can get injured.
One corner of the base is slightly rounded, and on the second, a rectangular selection is made.
< img class = "aligncenter" alt = "How to make a quick-release stopper (with disconnectable magnets) for cutting grooves with a circular saw" src = "https://usamodelkina.ru/uploads/posts/2021-05/1620233416_bup-021.jpg"/> 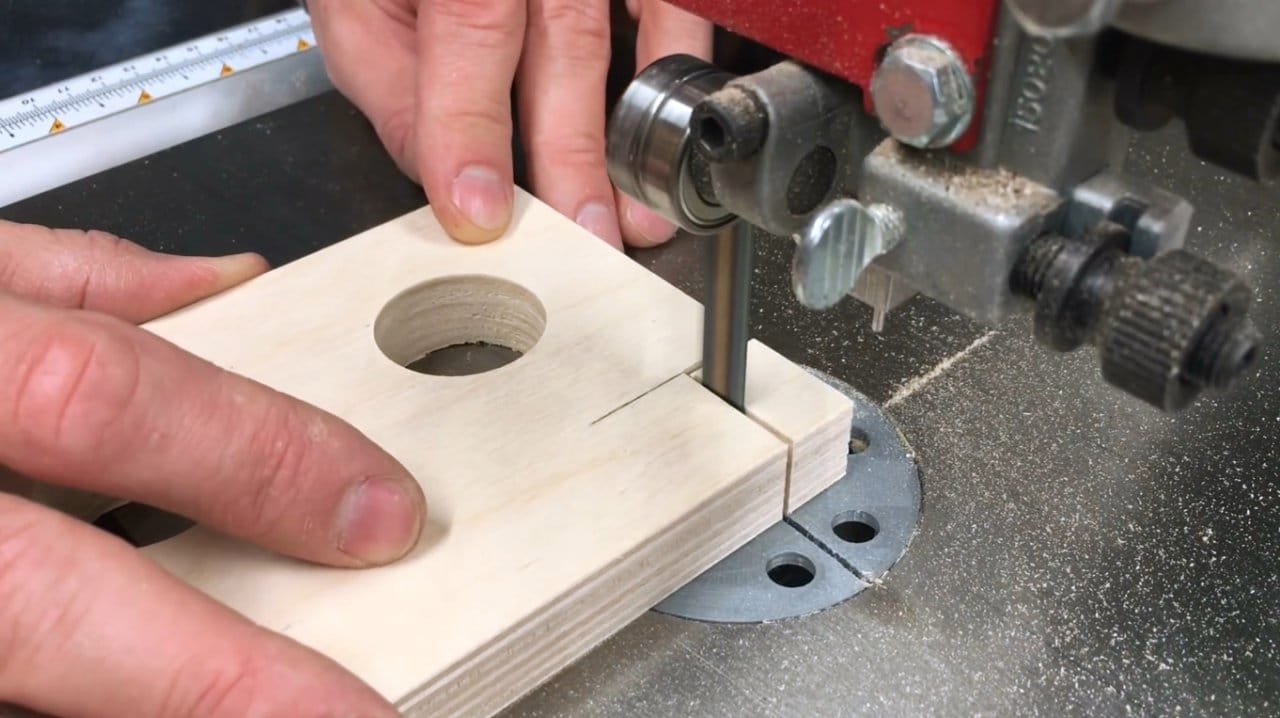 Next, a cover panel is cut out of 12-mm plywood, and two rectangular blanks for adjustable stops. 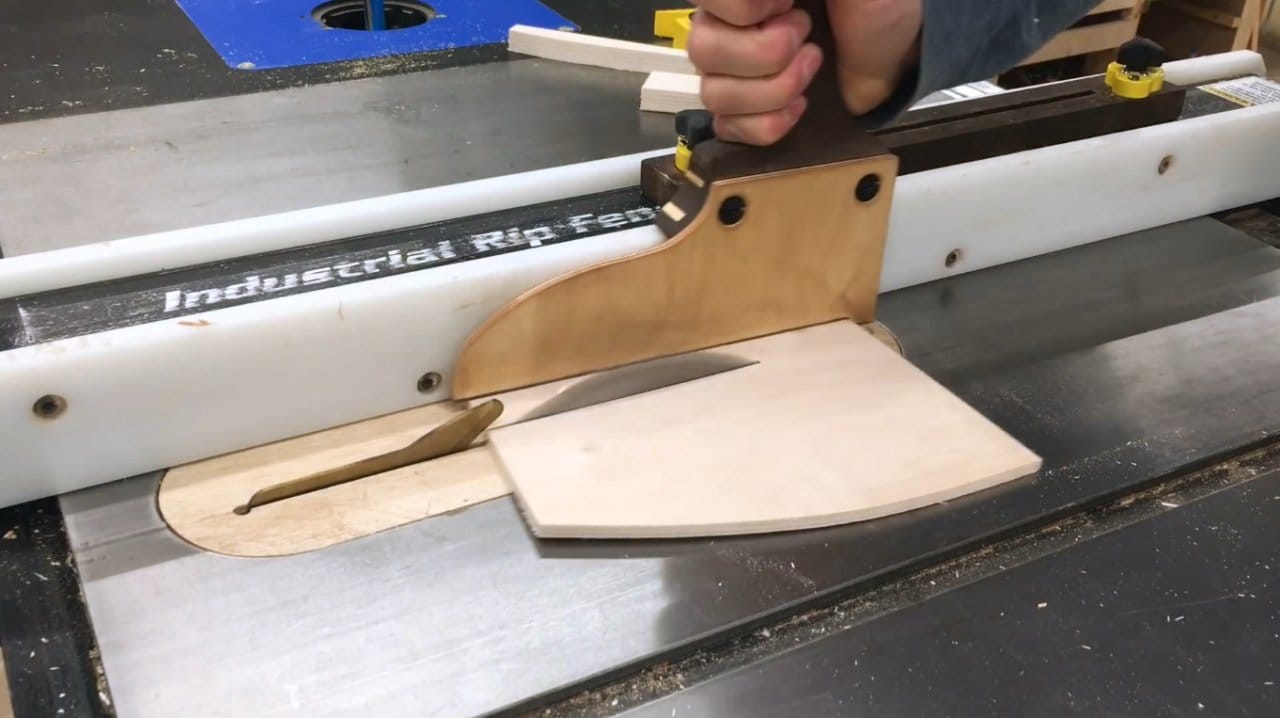 For the first, large stop, a U-shaped guide is cut out. Here the author uses a band saw, although you can get by with a regular jigsaw or a hacksaw. 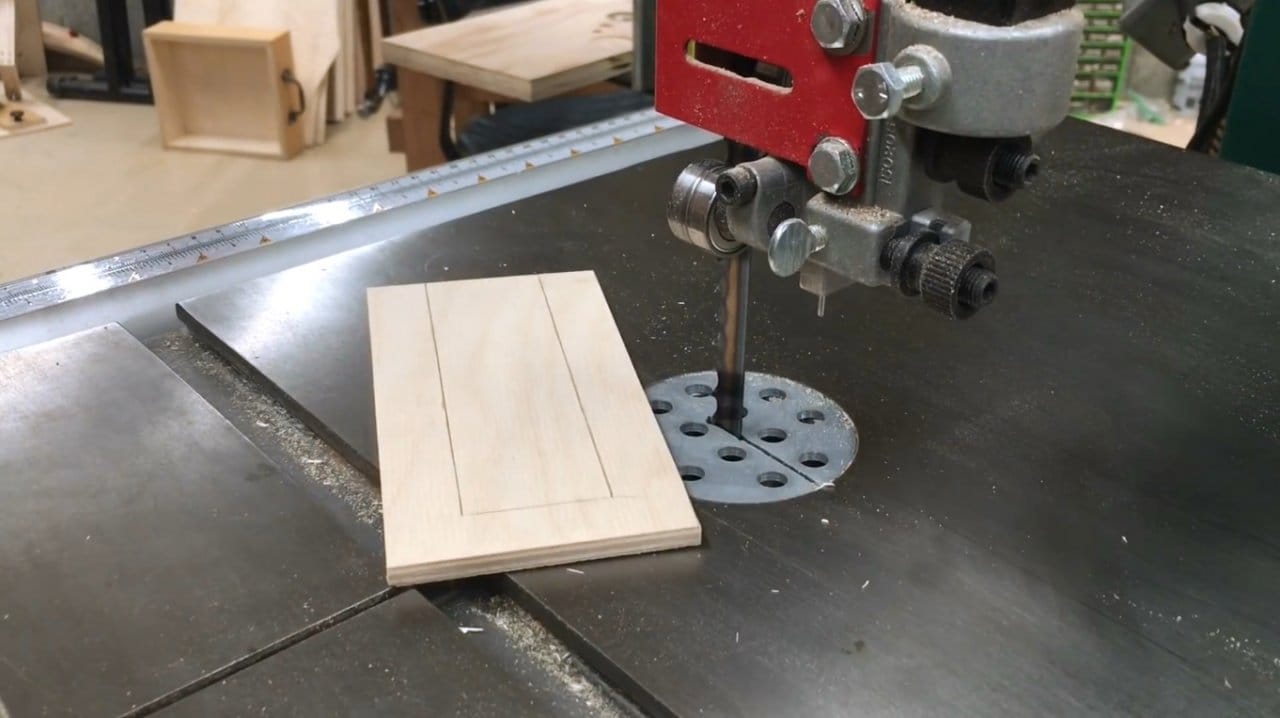 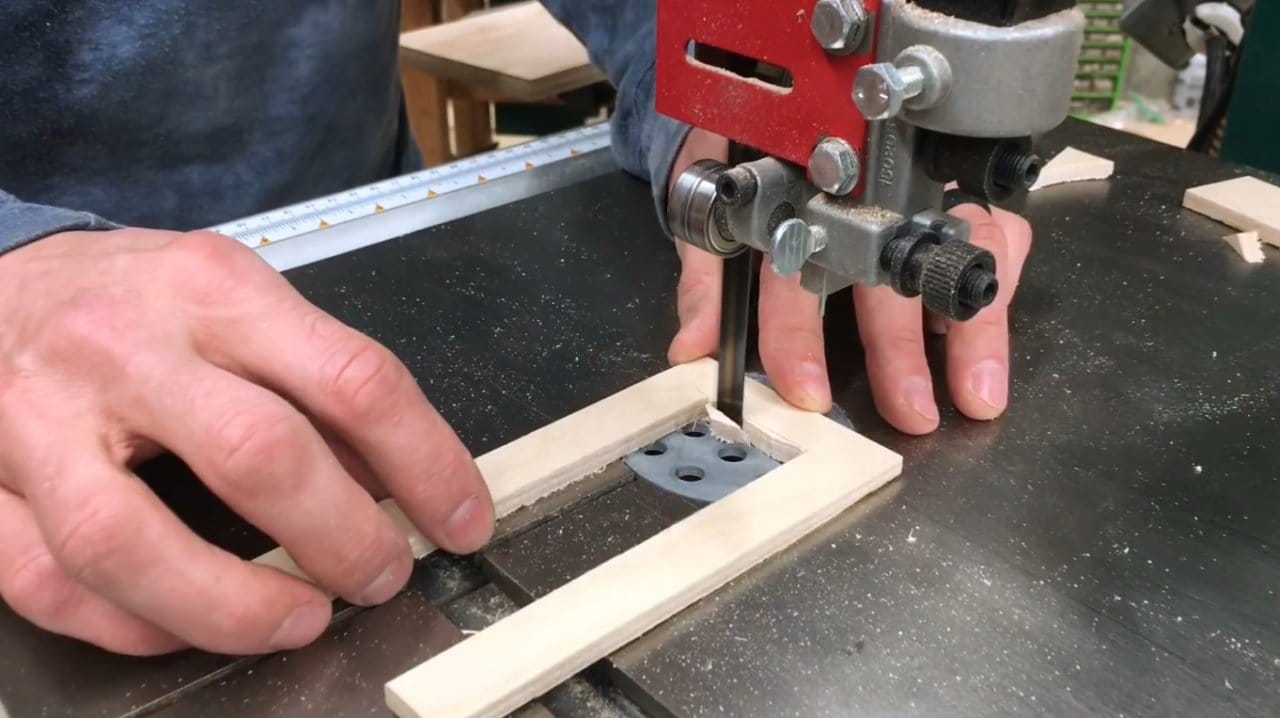 The contours and centers of the holes made in the base are marked on the overhead panel. Symmetrical holes of the same diameter are drilled from the received marks. 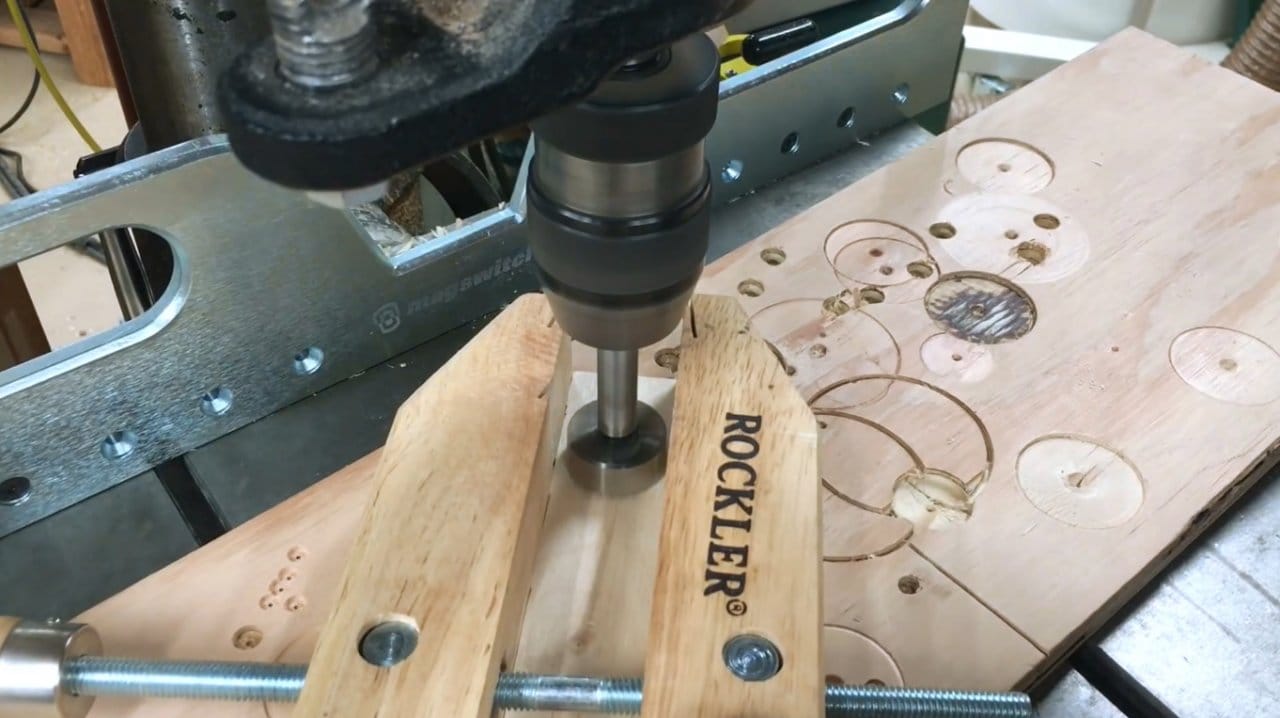 The upper part of the magnet bodies has a complex shape, so you have to form curly cutouts for them with a circular saw. 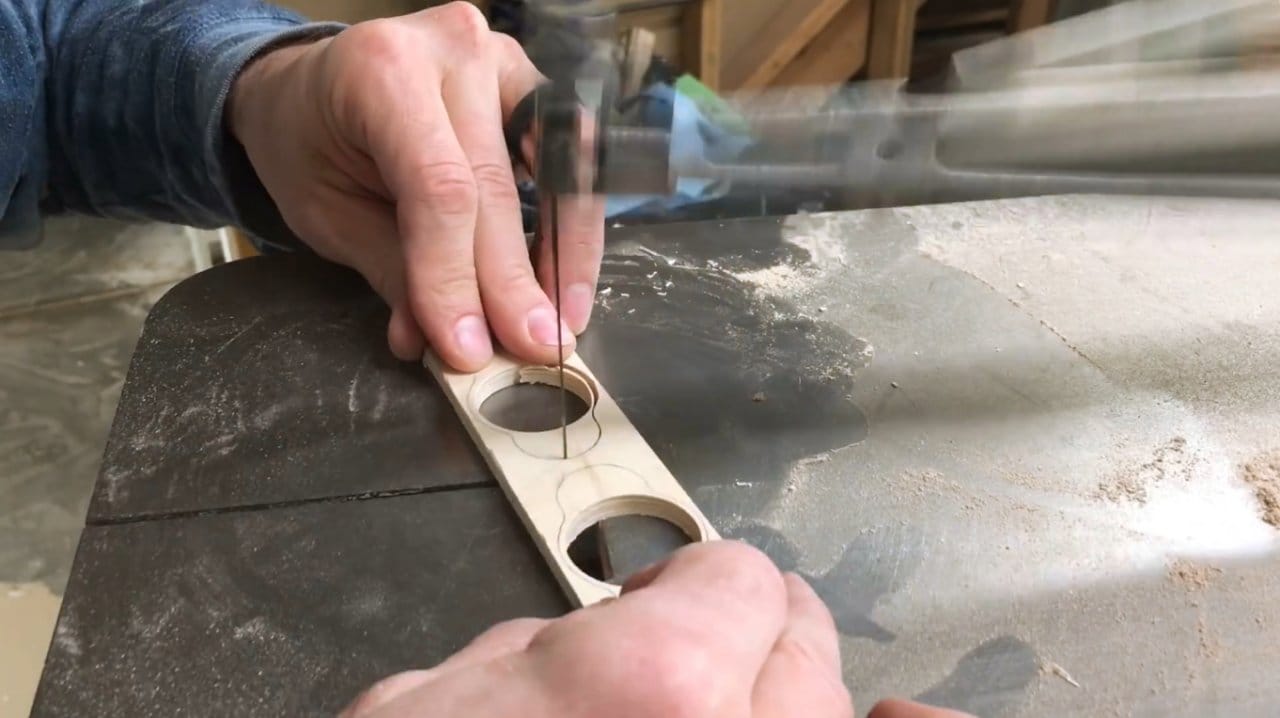 Now, having inserted both switchable magnets into the base, the author glues the overhead panel in its place. dimensions with an overlay panel. 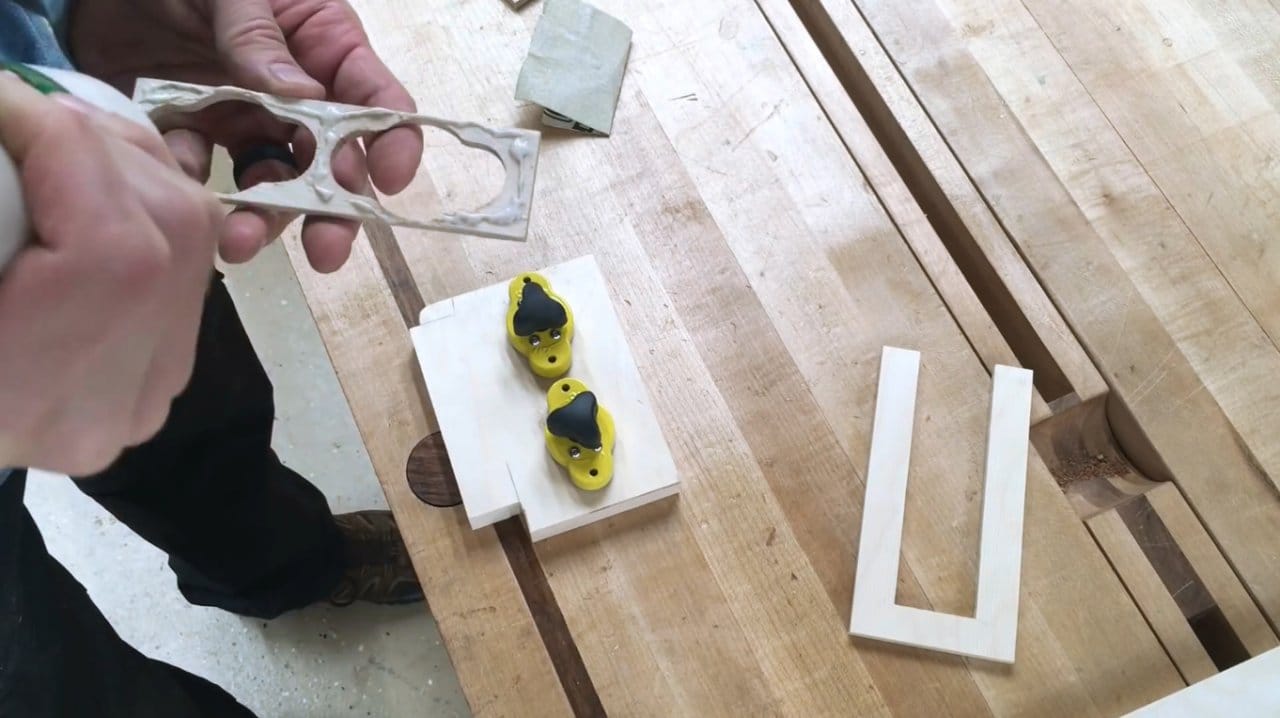 The pad is pressed against the base during gluing with spring clips, and the magnets are pulled out. 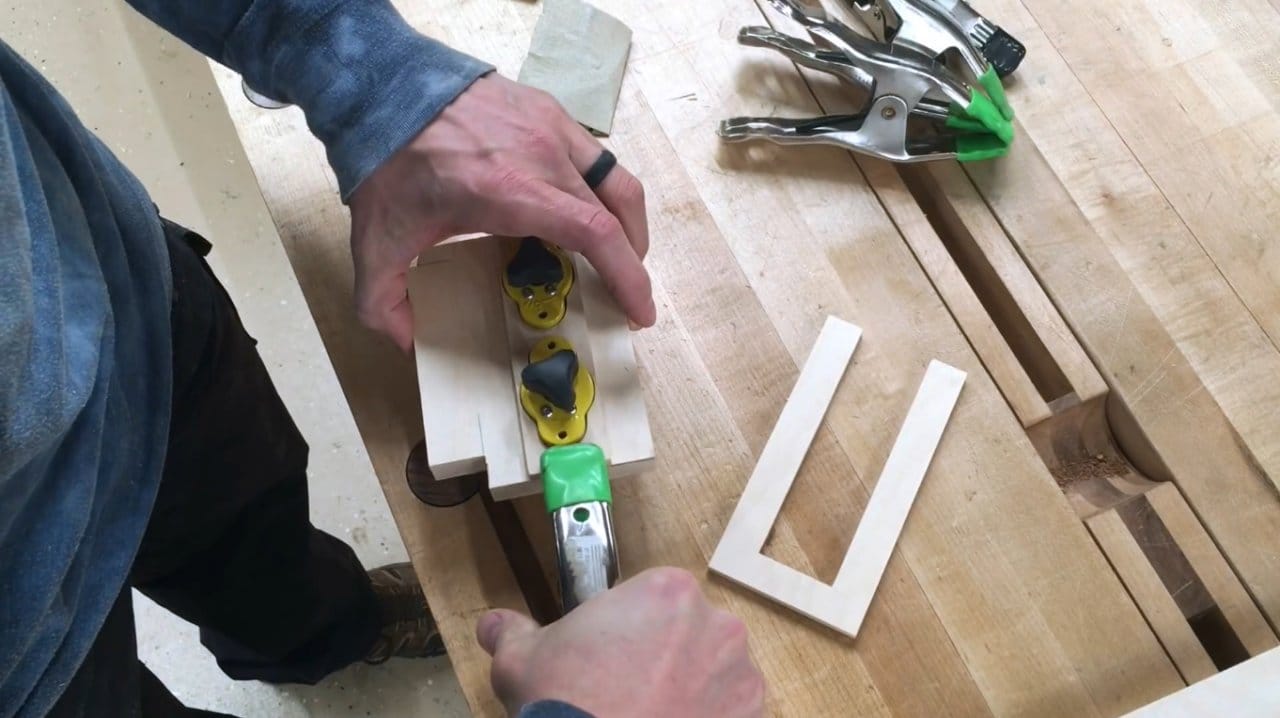 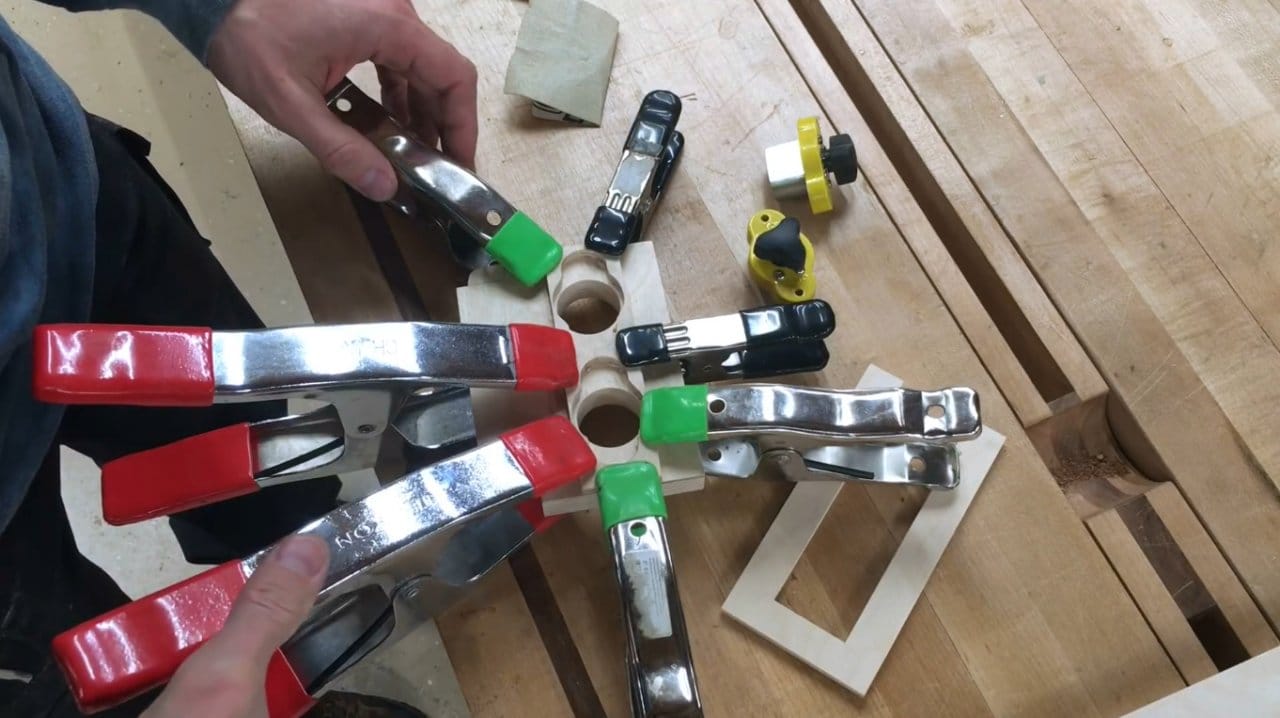 While the glue hardens, the author drills a couple of holes in the four corners of the guide. The holes are close enough to each other, and the lintels are removed with a chisel.
Through the resulting oval holes, the clamping screws will be screwed into the base. 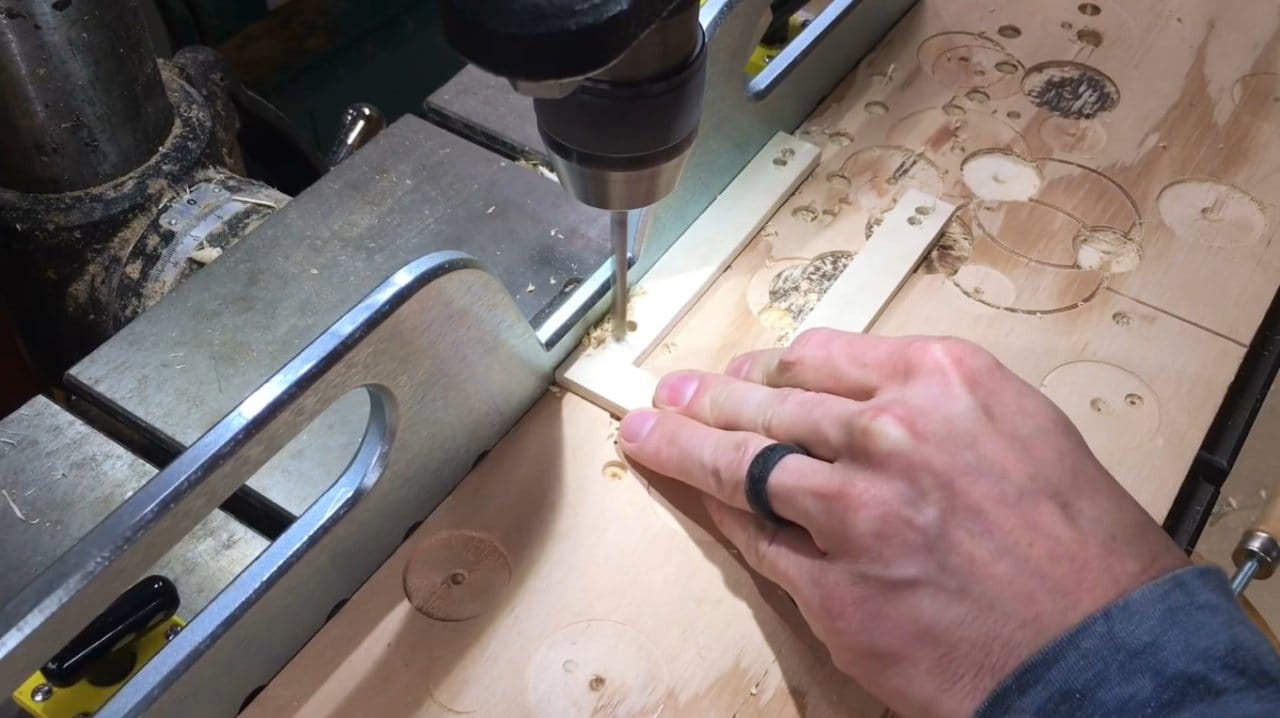 To the edges of both guides master glues on a block. The thickness of these bars is the same as at the base.
After the glue has set, the bars will need to be additionally fixed with nails or staples on the guides. 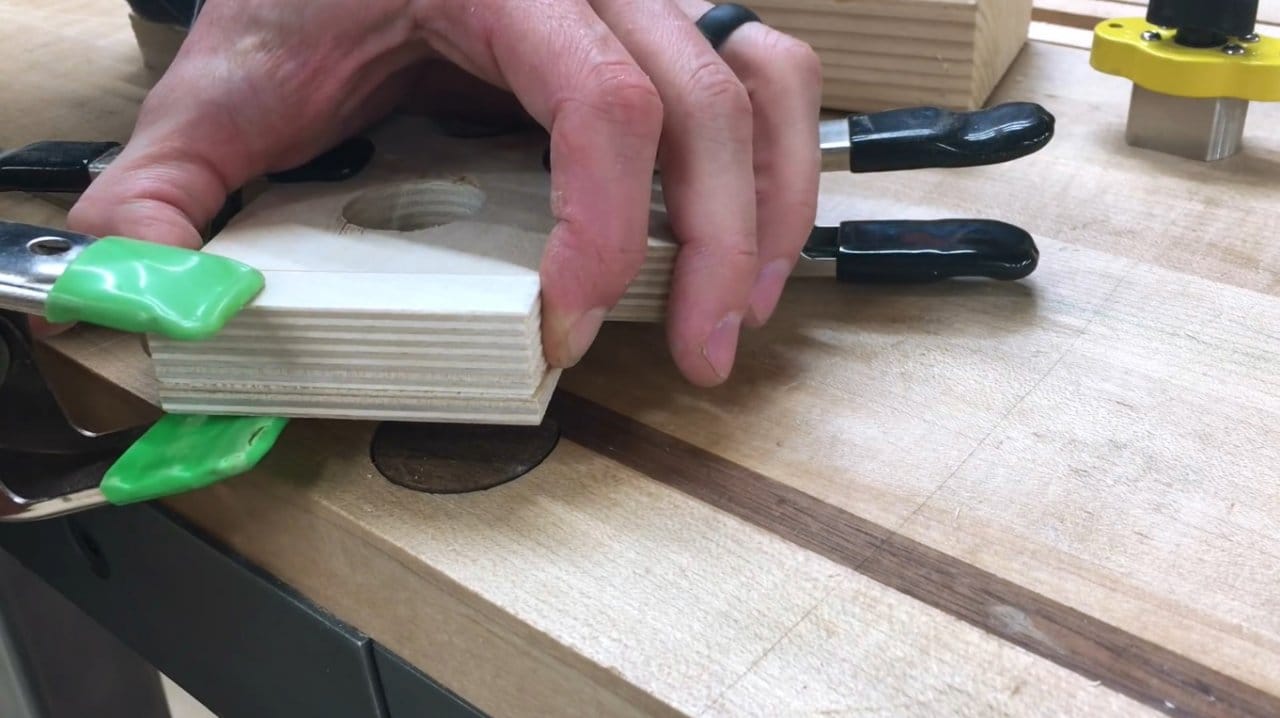 Attaching a stop with a U-shaped guide to the base, and marking the centers of the holes, the author drills pilot holes for the screws.
Pilot holes are also being prepared for attaching magnet bodies.
The first stop will be fixed on the base with four screws. It will be necessary to adjust this emphasis very rarely, and such a fastening system will be sufficient. 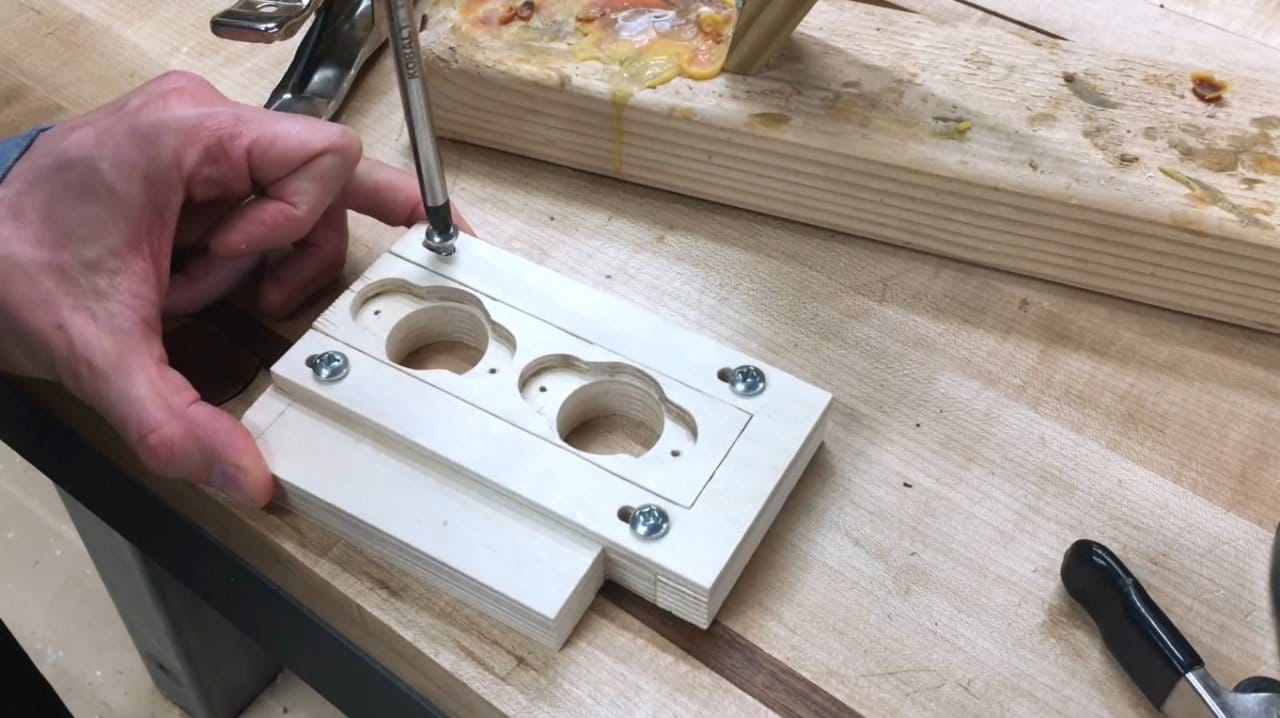 Now the edges of the slot are marked on the guide of the second stop, and holes are drilled in these places. 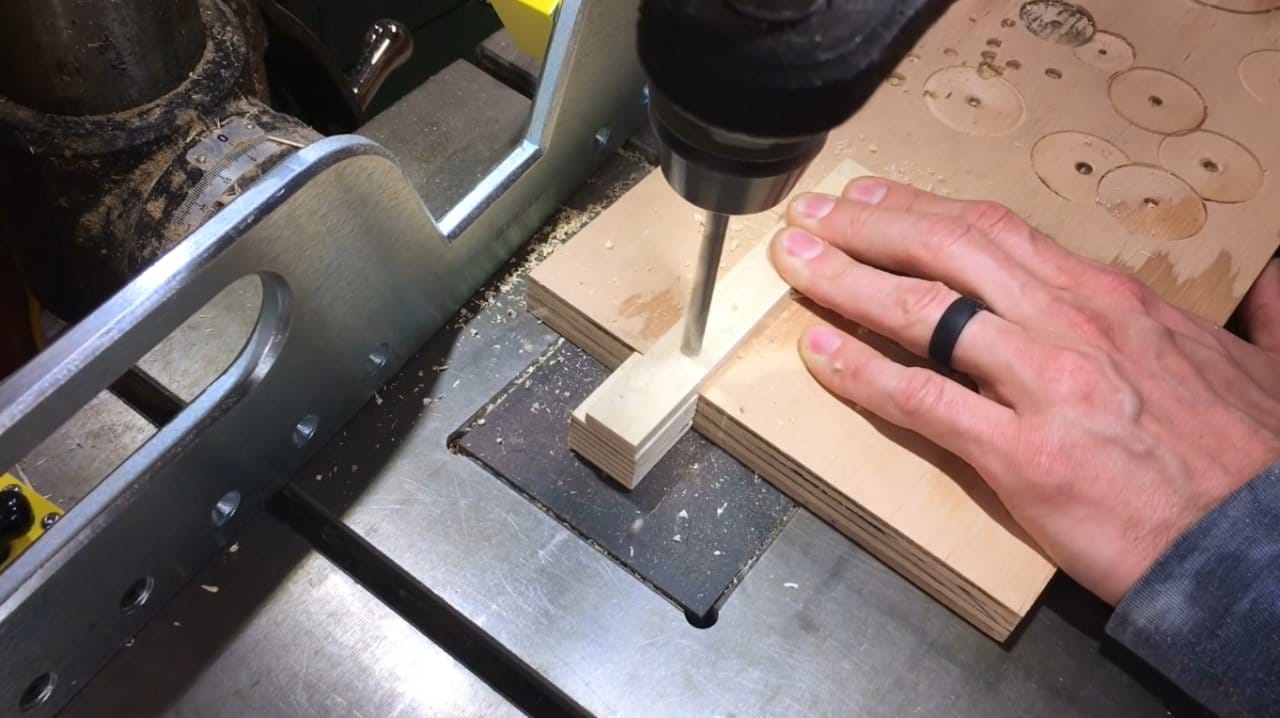 The slot is formed almost over the entire length of the guide. 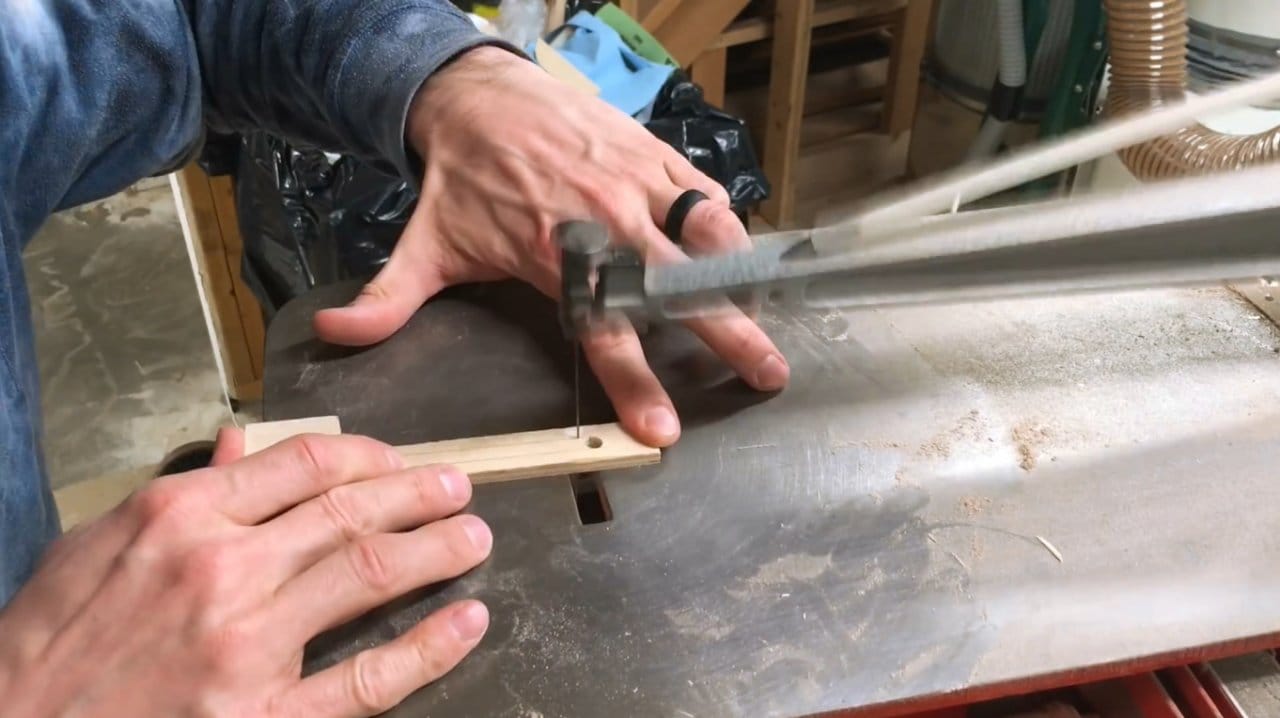 and at the beginning a pair of holes is drilled for the hold-down bolts.
On the lower side, the holes obtained are widened to accommodate the bolt heads. The diameter should be chosen so that the heads fit snugly into place.
< img class = "aligncenter" alt = "How to make a quick-release stopper (with disconnectable magnets) for cutting grooves with a circular saw" src = "https://usamodelkina.ru/uploads/posts/2021-05/1620233420_bup-082.jpg"/> 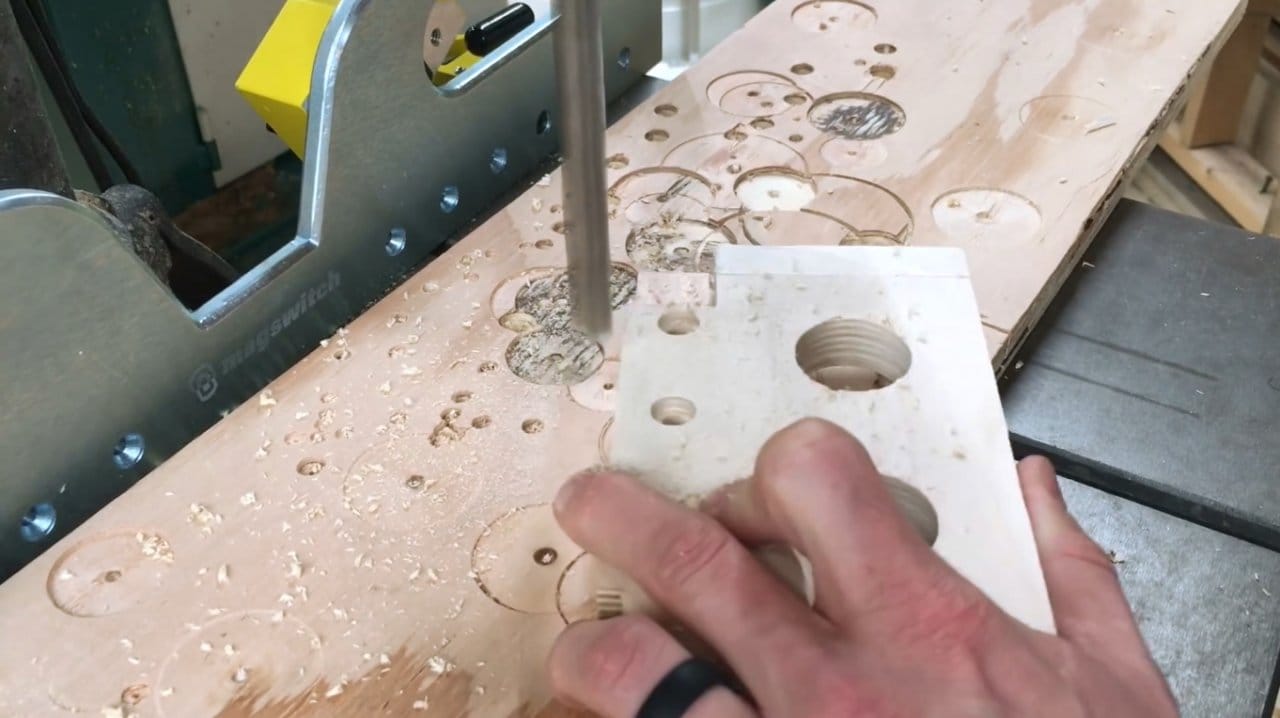 Bolts are inserted from the underside of the base and hammered in with a hammer. 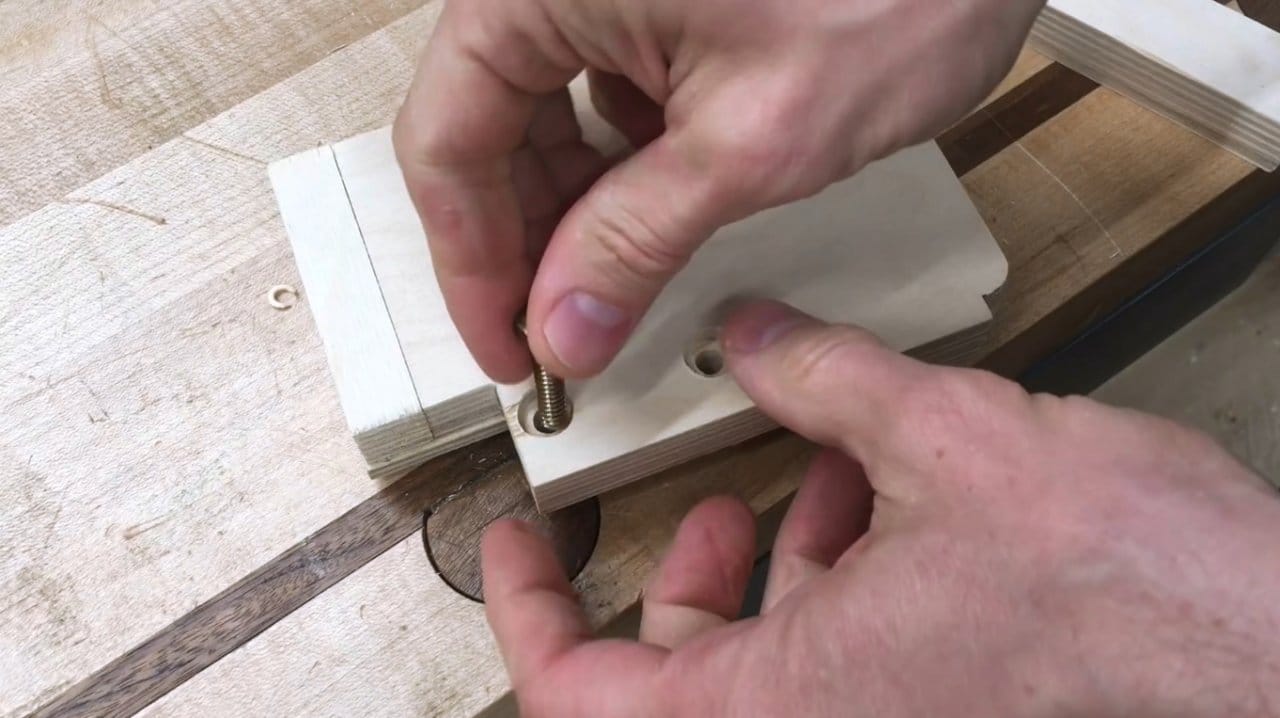 Having installed and fixed both stops in the “zero” position, the author aligns the trailing edge of the device.
To ensure protection from moisture, all wooden surfaces of the product are impregnated with linseed oil. 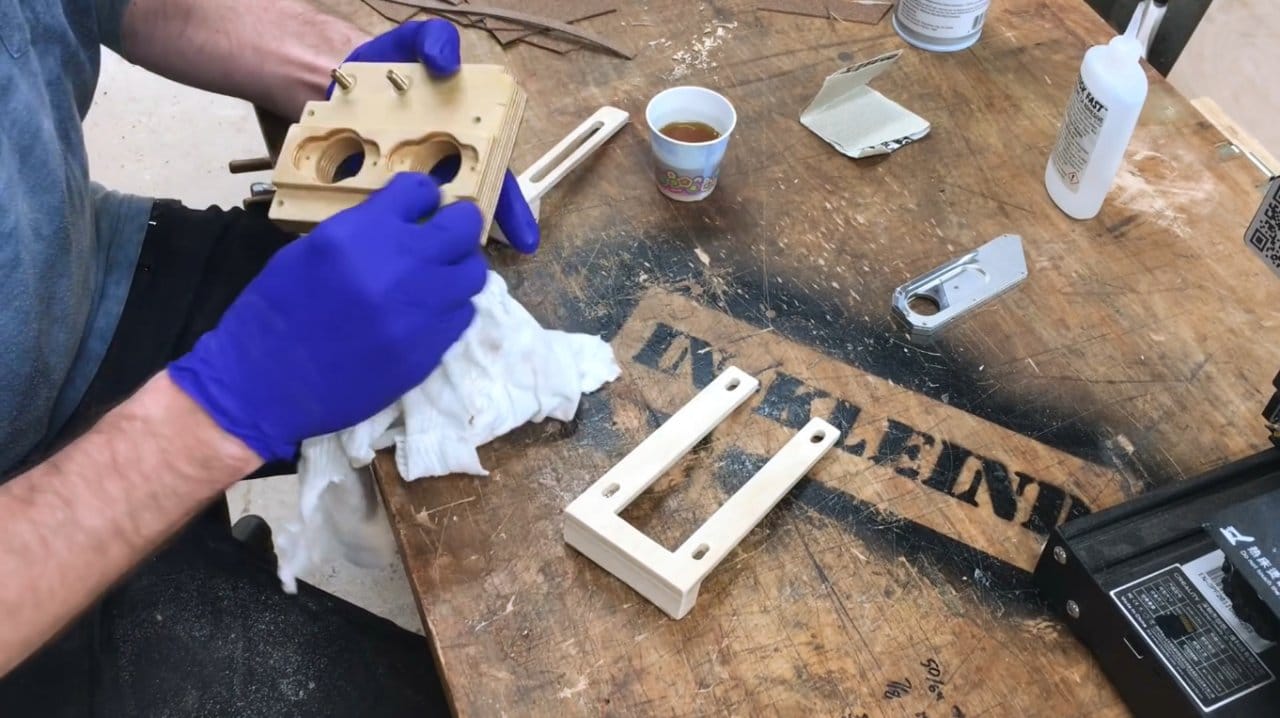 After a while, excess impregnation are removed and the device can be collected. 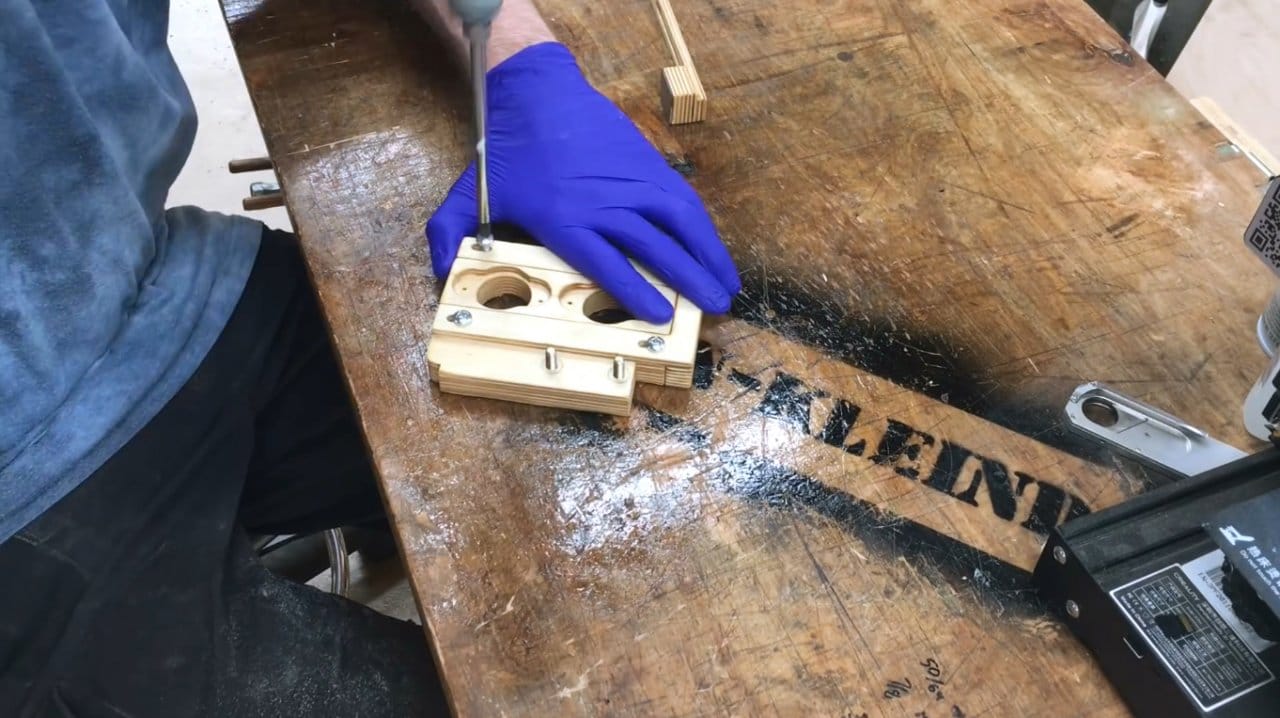 and screwed on with self-tapping screws both disconnectable magnets … As already mentioned, these magnets are also available in a “square” design.
So, everything is ready – it's time to set up the device … The first step is to raise the saw blade a little.
Pulling out the wide stop, insert the saw blade into the gap formed between the base and the stop bar.
It remains to clamp the disc between the base and the block, and fix the position of the stop with screws. This adjustment is performed only when changing the saw blade (to a thicker or thinner one). 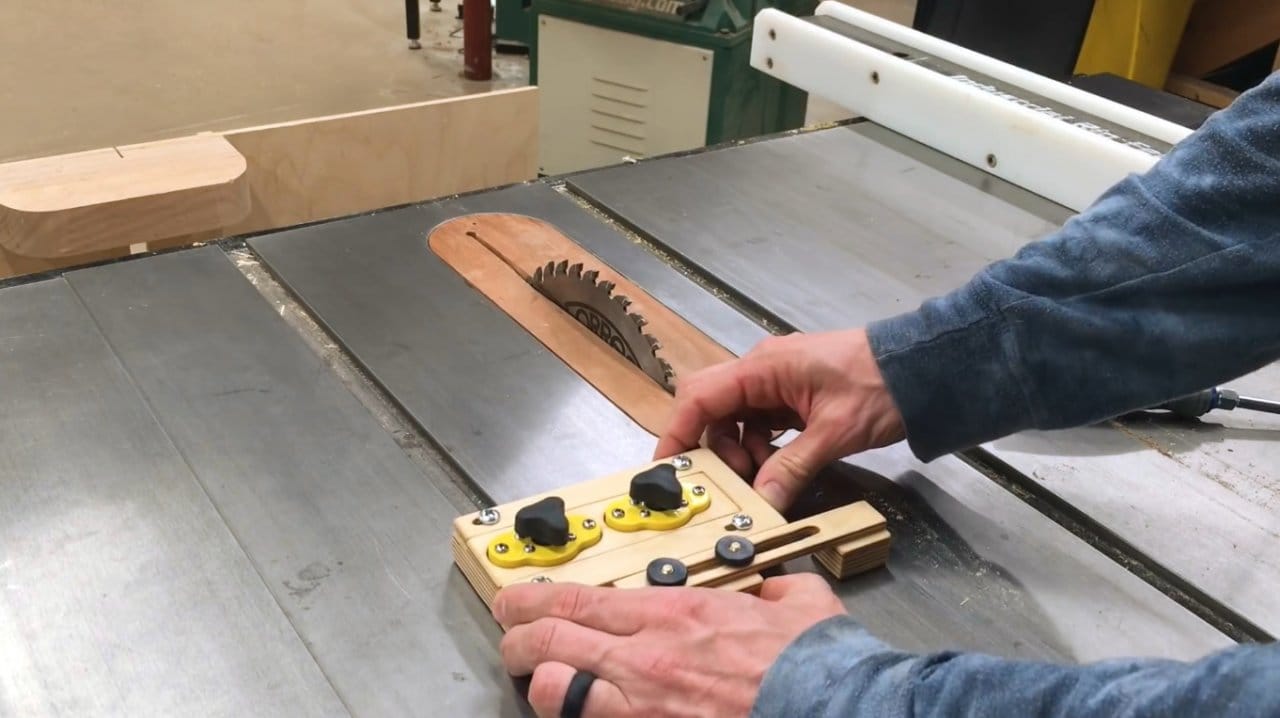 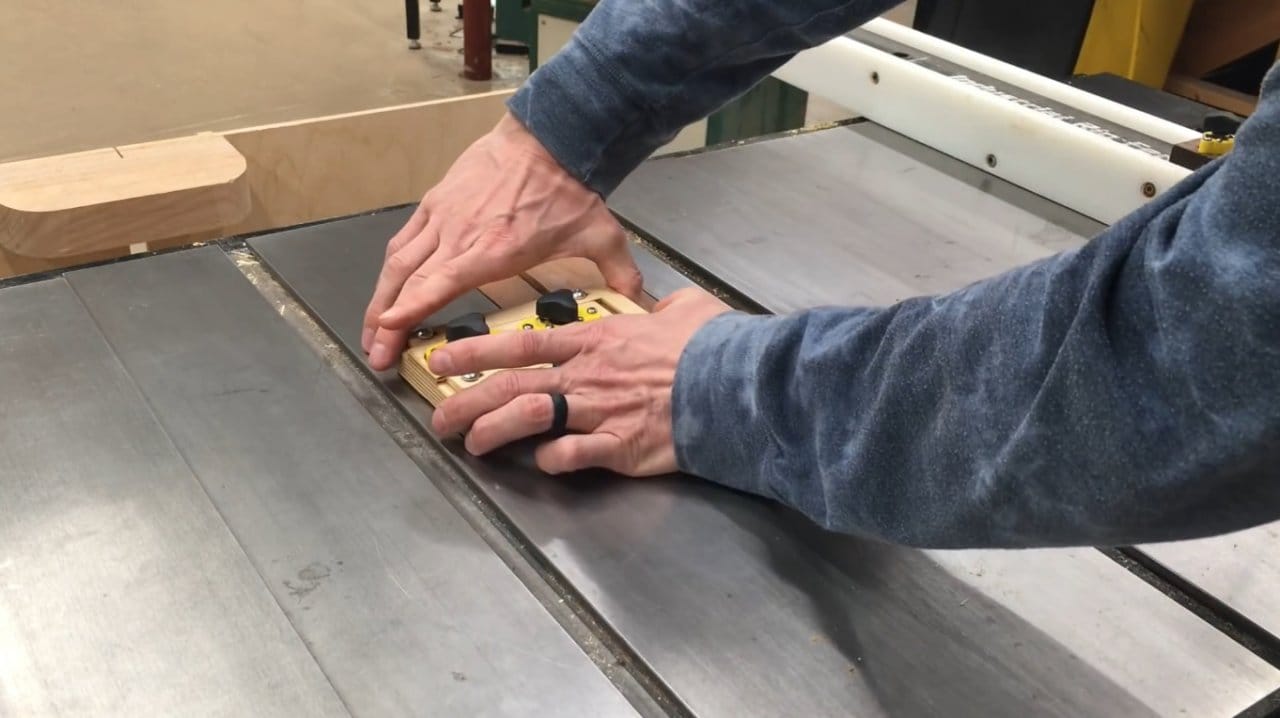 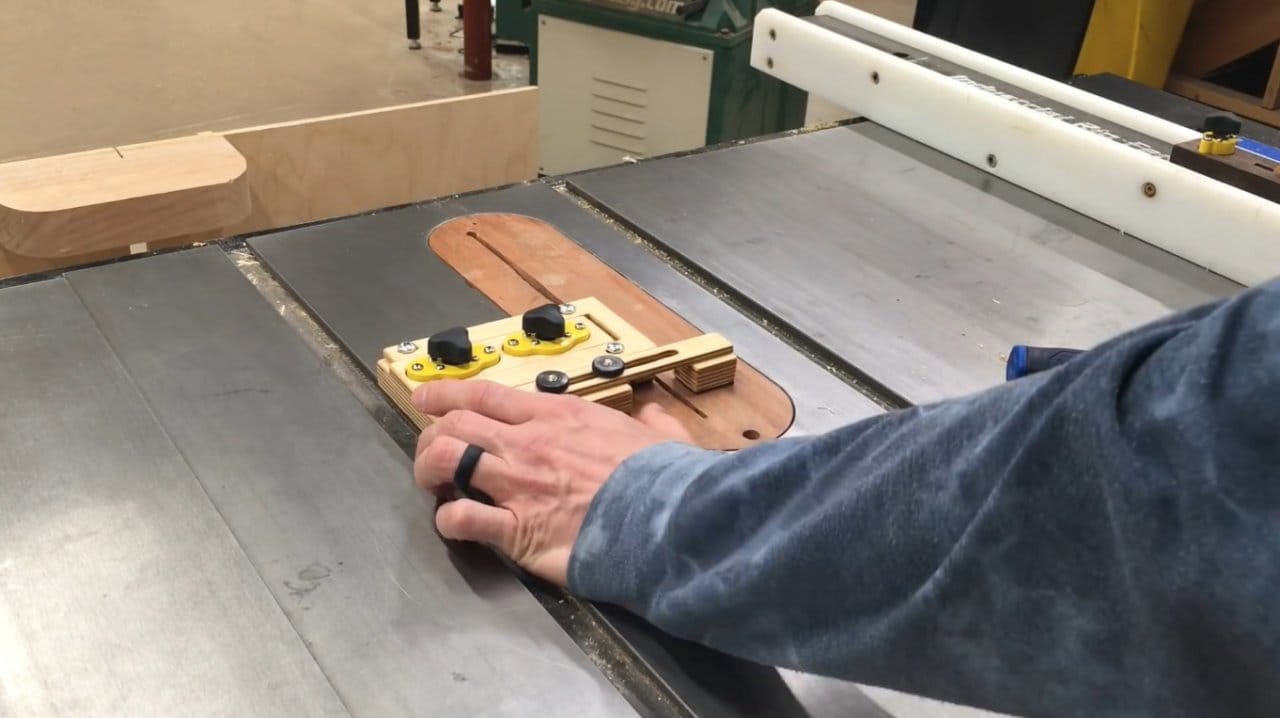 Then the second guide is set already by the size of the part for which the cut will be made.
Here it is also enough to clamp the workpiece between the block and the base, and fix the position of the stop with a pair of wing nuts .
As a result, the difference between the two surfaces of the stops will make it possible to cut a perfectly aligned groove bounded by two external slots. And the thickness of the saw blade will be taken into account. 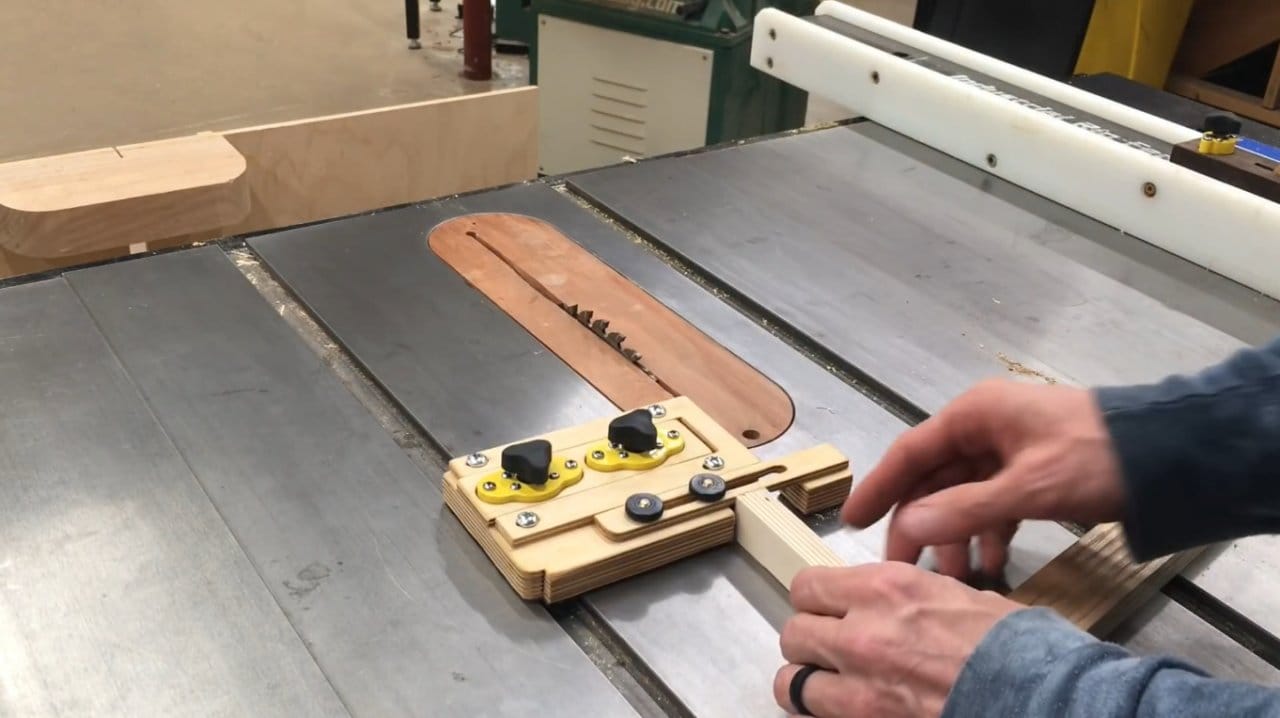 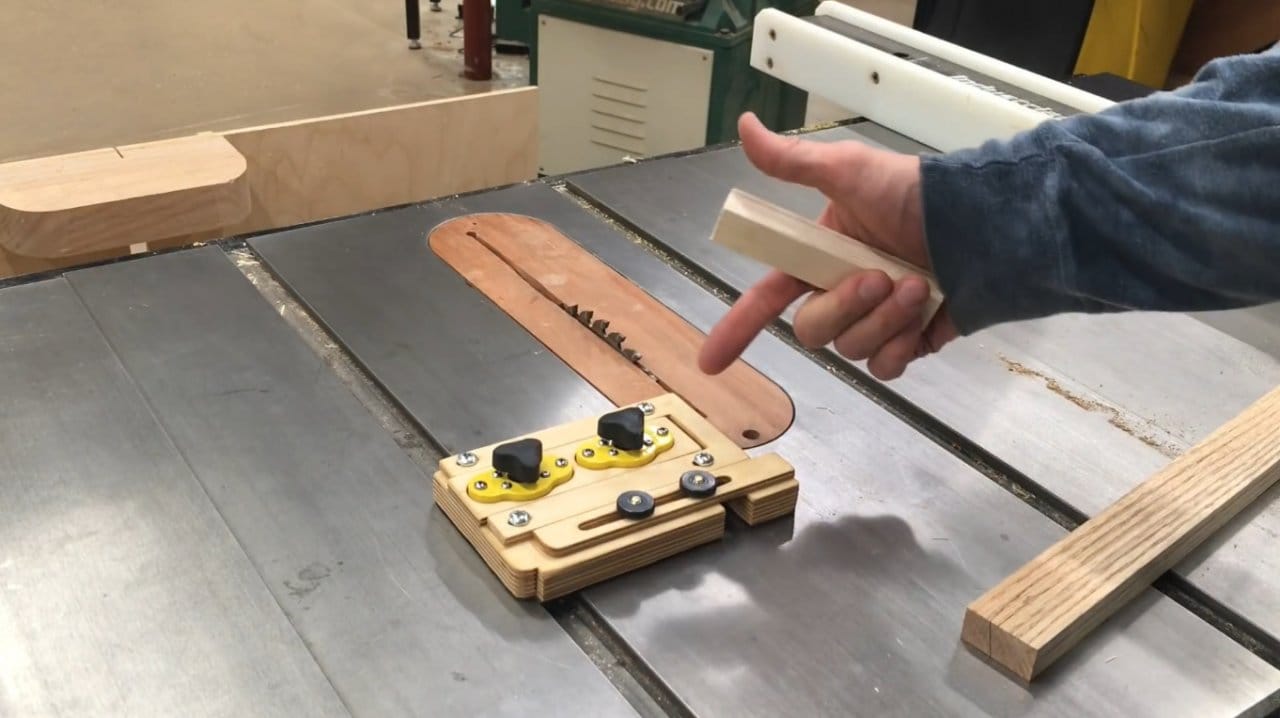 Now, having aligned the mark of the groove edge on the workpiece with the far corner of the saw blade, and sliding the part back together with the carriage, the author presses the wide stop of the device to the end of the part.
It remains only to fix the device on the table by turning the magnet switches . 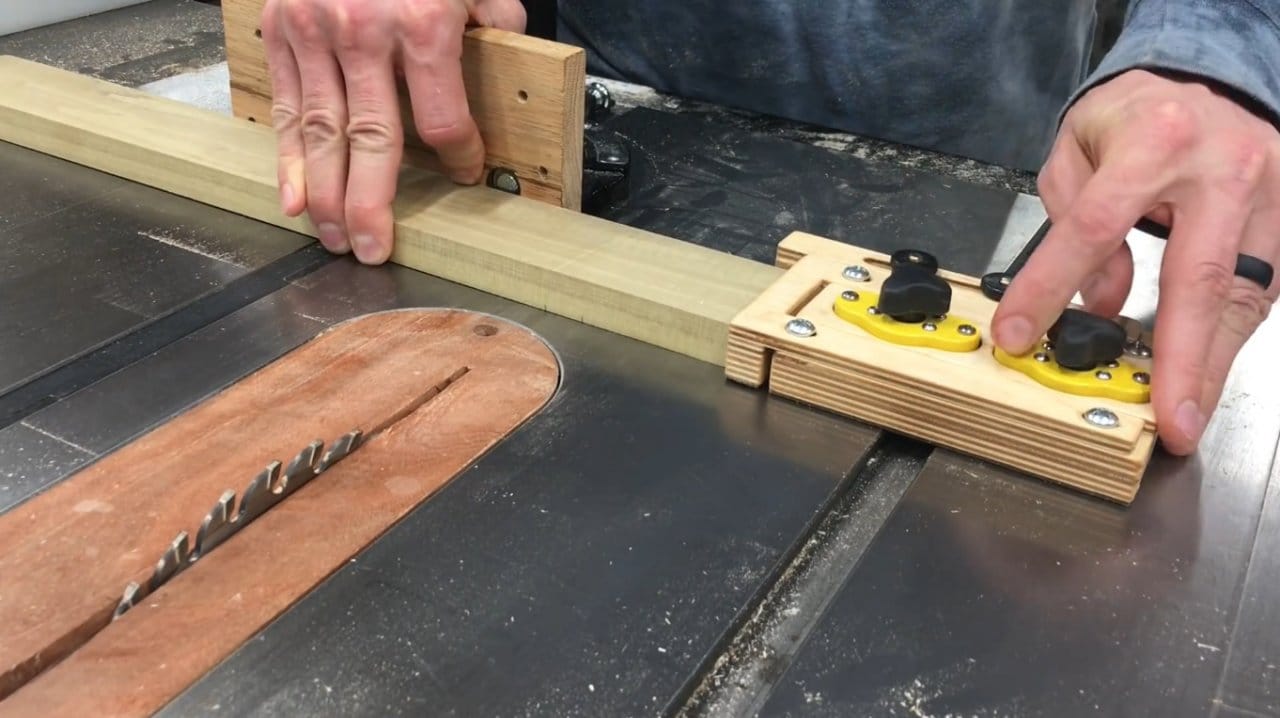 Without moving the workpiece, the wizard forms the first slot. 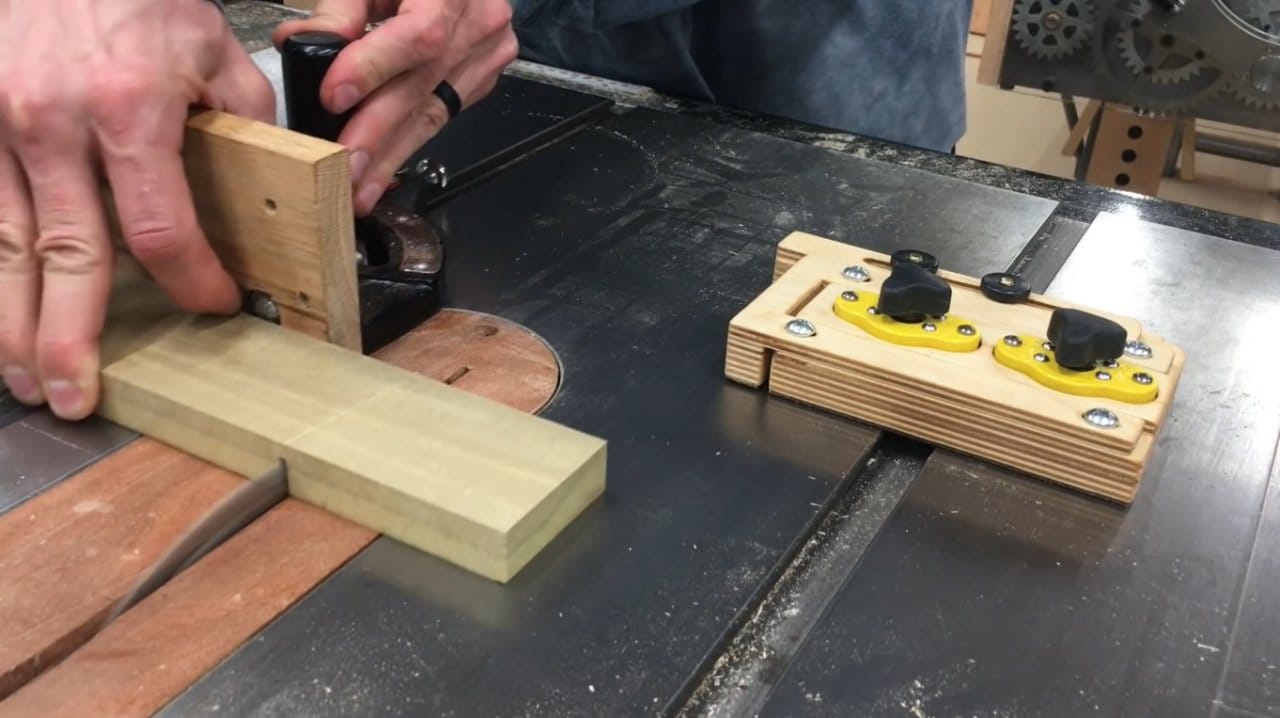 Now the end face of the part needs to rest against the second, narrow stop, and make a second cut. 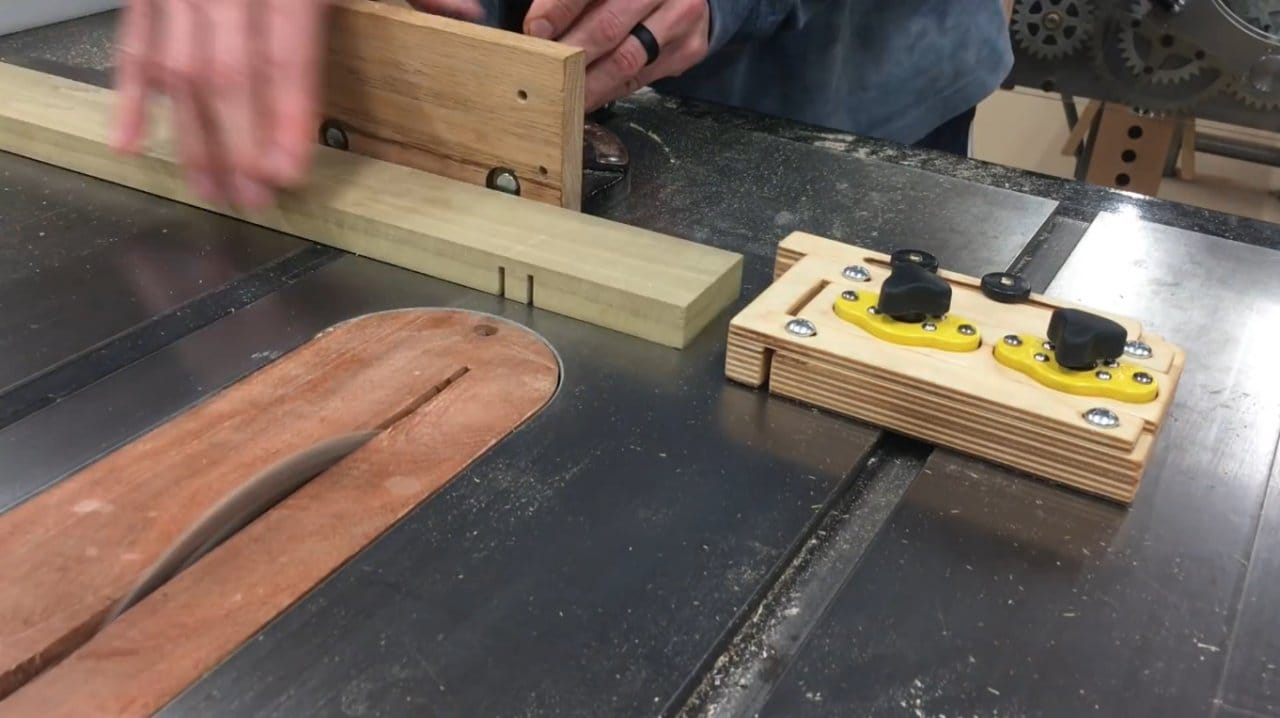 The rest of the excess material is removed in several passes, and the groove is ready. 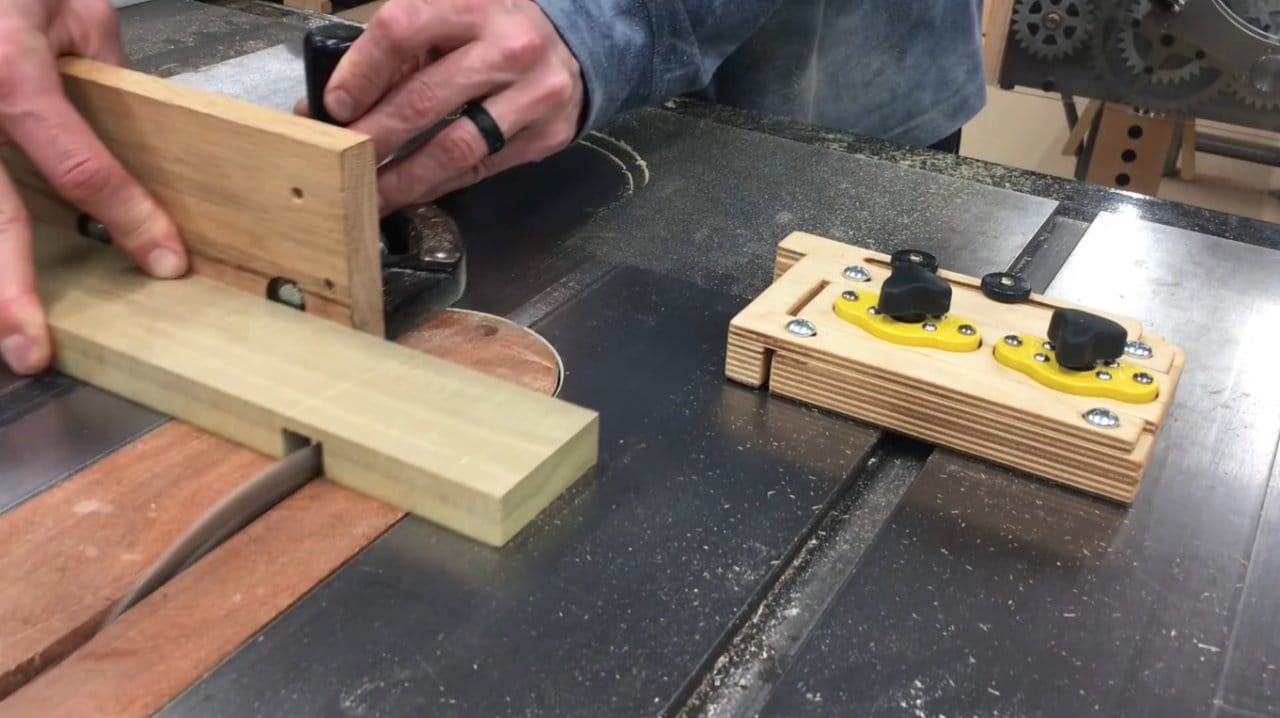 As you can see, the part is included very tightly into place, the first time.
I thank the author for a very interesting idea of ​​useful equipment for a circular saw!
Good mood, good health, and interesting ideas!
Subscribe to the telegram channel of the site, so as not to miss new articles.
The author's video can be viewed here.