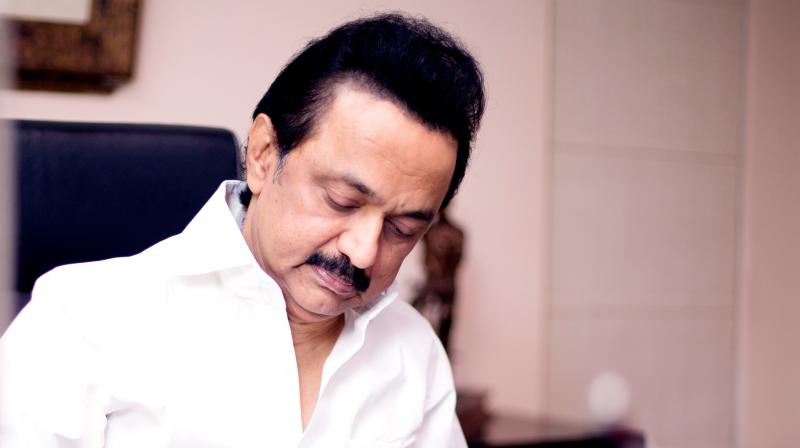 Chennai: The DMK is set to storm Fort St George for the sixth time after 10 years with party president M. K. Stalin becoming the Chief Minister for the first time as the results of the April 6 elections for the state Assembly till 10 pm on Sunday indicated a clear victory for the party.

Governor Banwarilal Purohit is likely to swear in Stalin as Chief Minister at a simple function inside the Raj Bhavan in view of the coronavirus pandemic, though the party is said to have shown interest in having a gala affair at the university auditorium.

Throughout the day, the DMK and its allies were doing well even as counting of votes went on with intermittent breaks to sanitize the rooms every two hours since 8 am when the process began.

The alliance emerged a clear winner as counting progressed, prompting leaders from across the country to send congratulatory messages and by afternoon it became clear that the DMK would be able to form the next government on its own.

The ruling AIADMK won and was leading in a substantial number of constituencies to qualify as the Opposition in the Assembly though many of its ministers lost out to candidates of the DMK alliance. Chief Minister Edappadi K. Palaniswami swept in his Edappadi constituency.

Among the ministers who lost were K. Pandiarajan to S. M. Nasar in Avadi constituency, K. T. Rajenthra Bhalaji to Thangapandian in Rajapalayam, D. Jayakumar to R. Murthy in Royapuram, Velamandi Natarajan to Inigo Irudhyaraj in Trichy East, M. R. Vijayabaskar to Senthil Balaji in Karur, M. C. Sampath to Iyappan in Cuddalore, C. V. Shanmugham to Lakshmanan in Villupuram, K. C. Veeramani to Devaraj in Jolarpettai and P. Benjamin in Maduravoyal.

The DMK’s decisive victory was evident only by the afternoon as the initial trends showed the AIADMK alliance closely following it. However the Amma Munnetra Kazhagam of T. T. V. Dhinakaran, which was expected to make an impact in some parts of southern Tamil Nadu, and Naam Tamizhar Katchi of Seeman did not show any signs of winning even a single seat right from the beginning.

Makkal Needhi Maiam of Kamal Haasan was showing a possibility of the party founder alone winning from Coimbatore West. The race for the victory post continued to be a neck and neck affair for the three candidates in the constituency – Kamal, BJP’s Vanathi Sreenivasan and Congress’ Mayura Jayakumar – till late evening, when the BJP nominee took a clear lead.

The BJP in fact won in Nagercoil and Tirunelveli constituencies in southern Tamil Nadu, besides Modkurichi in Erode district, thus taking the total tally of MLAs in the next Assembly to four. It is a remarkable breakthrough for the party that had been floundering in the elections that it contested on its own.

Seeman’s party drew a blank, though the party founder claimed that they had grown and that the youth of the State were solidly behind him. He said that his party’s vote share has gone up from 4 per cent in the 2019 Lok Sabha elections to 10 per cent now, though all the candidates lost miserably in all the constituencies, including Seeman in Thiruvottiyur.

Though crowding outside the counting centre was banned by the Election Commission of India in view of the pandemic, counting agents of various parties thronged the centres on time, at around 7 am, and the process kicked off at 8 am.

Postal ballots were taken up first and then the EVMs for counting. Just as it seemed that the DMK was having a march over the rest, posters came up all over the State thanking the people for reposing faith in Stalin. Also a crowd of around 300 people gathered at DMK headquarters to celebrate the victory by distributing sweets, lighting crackers, raising slogans and breaking into a dance. Party organization secretary R .S .Bharthi had to rush to Anna Arivalayam to explain to the enthusiastic cadre about the ECI norms and coax them to leave the premises, which they did reluctantly.

Police then erected barricades to prevent the crowds from reaching the place as the celebrations at one point spilled over to Anna Salai itself, despite the Sunday lockdown in force.

Soon, as the DMK’s victory was confirmed with party candidates taking decisive leads, Stalin started getting visitors at his residence. Party cadre too started trooping there to express their happiness to the leader. So the police cracked down and erected barricades to prevent crowding.

Many top party leaders like T. R. Balu, Kanimozhi and A. Raja went in to congratulate Stalin personally. Then started the stream of visitors from the police and bureaucracy. Many IAS and IPS officers called on the next Chief Minister, though party cadre were not allowed entry into the road.