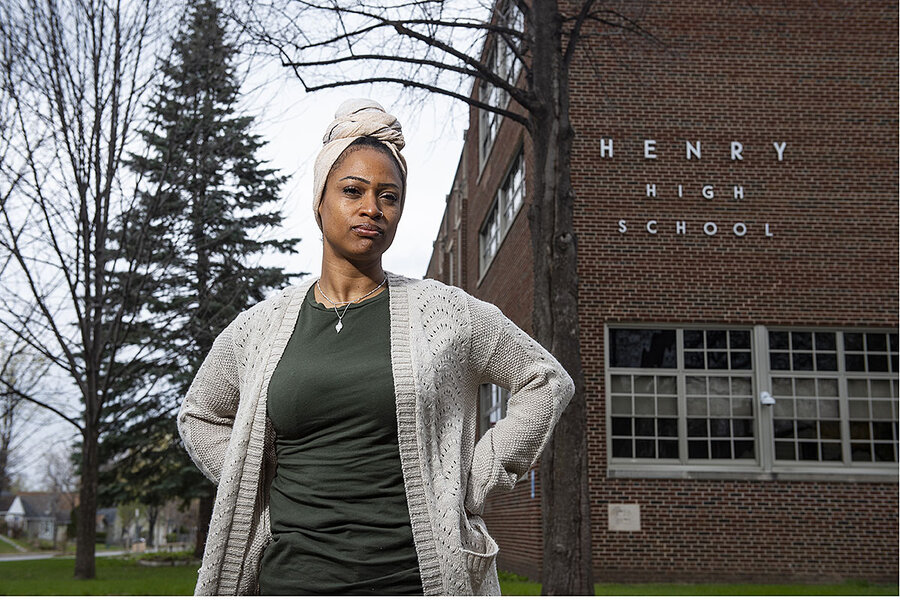 High school teacher Nafeesah Muhammad decided to play a game recently with her students. In the style of the classic teenage pastime “never have I ever,” she posed statements to her class for discussion. One prompt, “never have I ever been scared of the cops,” resulted in students sharing times when they had felt afraid of the police.

“That opened the door to talk about it, to talk about Daunte Wright, about protests and riots and the National Guard being on their streets,” says Ms. Muhammad, an English teacher at Patrick Henry High School in Minneapolis. “I try to open the window and crack the door and make space for whoever needs to talk about it.”

Incorporating current events into her classroom – and digging deeper to address topics like power, bias, and racism – is something Ms. Muhammad believes is essential in order to connect with her students and help them succeed.

The murder of George Floyd jolted many educators to prioritize teaching about structural racism and social justice – and resulted in pushback over student “indoctrination.” What can be learned from Minneapolis, a microcosm of the national debate on addressing race in schools?

“It recognizes their humanity, it builds community, it builds healing, it allows students to feel seen and allows teachers to learn about what’s going on in their lives,” says Ms. Muhammad, who teaches in a red brick high school surrounded by homes peppered recently with lawn signs reading “Justice for George Floyd” and “Guns Down, Love Up.”

For Ms. Muhammad, who describes herself as a social justice-minded teacher, covering these topics comes naturally, and she’s encouraging her colleagues to move toward a more inclusive curriculum. Some other teachers are uncomfortable or don’t see the purpose. As educators across the country wrestle with addressing the nation’s racial reckoning in their classrooms, what’s happening in Minneapolis offers a microcosm of the struggles and lessons learned since the death of Mr. Floyd here nearly a year ago. It has played out in the district in the form of teacher training, more space in some cases for in-class discussion, and, in the Twin Cities region overall, an increase in courses focused on the study of race.

“These kind of courses have been asked for and rolled out in various forms over the last 15 to 20 years, but you see a higher prioritization, you see more school board members talking about it, you see principals being more open in terms of expressing their desire and creating courses that didn’t exist last year,” says Brian Lozenski, an associate professor of urban and multicultural education at Macalester College in St. Paul.

This echoes a larger debate in the United States about what should be taught in classes – Historic examples of racism? How identity relates to racism? Basic ethnic studies? – and how to create safe environments for such discussions. Addressing journalists this week, Secretary of Education Miguel Cardona said he doesn’t believe the Department of Education should tell local districts what to teach, but he added, “[W]hen students are seen in the curriculum, when they are felt, like their stories are listened to or heard, they are more likely to engage and want to be there.”

Moves to create more inclusive schools for students of color, both in Minneapolis and nationally, have garnered support but also stirred up concerns. Critical race theory, an academic framework that considers how policies and laws perpetuate racism, has emerged as an especially contentious flash point, particularly in conservative circles.

In Idaho, the governor signed a bill on April 28 which states that ideas often found in critical race theory “undermine” the goals of dignity and nondiscrimination in public education. Since April 27, legislators in Oklahoma, Arkansas, and Louisiana have also passed or debated measures related to limiting critical race theory in schools or state agencies. Elsewhere, a school board election in Southlake, Texas, drew an unusually large turnout on May 2, with voters defeating candidates who supported a district plan to make curriculum and disciplinary changes to promote racial and cultural tolerance.

In Minneapolis, there’s momentum from education leaders to build teachers’ skills at addressing racial justice in their classes, both by providing space for informal discussion and with guidance on what should be taught. Minneapolis Public Schools is updating its “climate framework” to create a more welcoming and inclusive culture, is revising its literacy curriculum, and will require an ethnic studies class for graduation starting with the class of 2025. The district did not return requests for comment on how effective these measures have been.

More broadly, in the past year, a handful of school districts in the Twin Cities region have created courses focused on the study of race, says Professor Lozenski. At the state level, the Minnesota Department of Education is reviewing social studies standards, the first draft of which places greater emphasis on the history and culture of historically marginalized groups.

These ideas have been met with some pushback. Katherine Kersten, a senior policy fellow at Center of the American Experiment, a think tank based in Golden Valley, Minnesota, recently criticized the state’s social studies curriculum review, charging that if the draft is approved, “the next generation of Minnesota citizens will not only be uninformed – but scandalously misinformed – about our state’s and nation’s history and democratic institutions. They will, however, be programmed to become the next generation of ‘woke’ social activists.”

By contrast, Professor Lozenski says that creating a more diverse curriculum benefits all students. “Even now, African Americans are often looked at as just being victims of incredible racism, and that’s all people can say about [them],” he says. “It completely ignores the intellectual histories, the artistic exchanges, the mathematics, and the science that [have] been engaged with in these communities.”

“I don’t blame my teachers”

Sonia Svedahl, a senior at Washburn High School in Minneapolis, advocated for an ethnic studies graduation requirement after realizing that she hadn’t learned about her heritage in school. Her mother and grandparents are from India. She says her teachers address current events, but mostly on big news days, and she wishes there was more time for in-depth conversations, through both student-led forums and the course curriculum.

“I don’t blame my teachers because I think everyone doesn’t know what their role in the process is. It’s confusing, you don’t want to do the wrong thing,” she says. She and her friends have led voluntary student discussions at lunch and after school on race-based topics, but they find it hard to draw big groups due to remote learning and the recent transition to in-person classes.

Minneapolis Public Schools started the school year with an all-staff, virtual professional development session about anti-racist education by Dr. Bettina Love, a professor at the University of Georgia and co-founder of the Abolitionist Teaching Network. Nearby districts also offer equity training, but professional development can only go so far, says Lee-Ann Stephens, a former Minnesota teacher of the year who works in the St. Louis Park school district, a suburb adjacent to Minneapolis.

“We offer training quite a bit, especially about creating conversations about race protocols … but I think it also has to be something that gets internalized and is important. Particularly with race, it’s not normed, it gets uncomfortable because no one wants to offend or say the wrong thing, but students just want us to open a space for them,” says Dr. Stephens.

Statewide, only 4% of teachers in Minnesota identify as teachers of color or American Indian, while 34% of the student population does, according to the Minnesota Department of Education.

Samantha Pree-Stinson, a Minneapolis resident and mom of three sons, says Black students in her neighborhood are “ill equipped to talk about what they’re experiencing” in their personal lives while at school, “and teachers are ill equipped to talk about it.” She advocates for a more diverse workforce and better teacher training, because she believes most teachers “want to be culturally competent.”

Back at Patrick Henry High School, where Ms. Muhammad teaches, a few students linger after school recently, chatting or walking to the baseball fields for practice. One tenth grade student, standing outside with a friend, says she doesn’t like to talk about current events in her classes. “It’s sad to talk about. It’s sad that it keeps happening,” she says, referring to police shootings of Black men.

Ms. Muhammad recognizes that not all of her students want to discuss topics like police shootings or protests in school, and she knows her students need a space to feel joyful. She seeks to provide joy through her classroom environment and with lessons that show the strengths and successes of various racial and ethnic groups. She follows her students’ lead on whether or how much they want to discuss social injustices in the news.

“I believe joy is healing. In our classrooms, especially in north Minneapolis, our kids deserve to be in that healing process,” she says. “Whether covert or overt, I think joy is healing to the students and it creates resiliency in them so they can keep pushing even amid all this craziness.”

The insurrectionists are winning