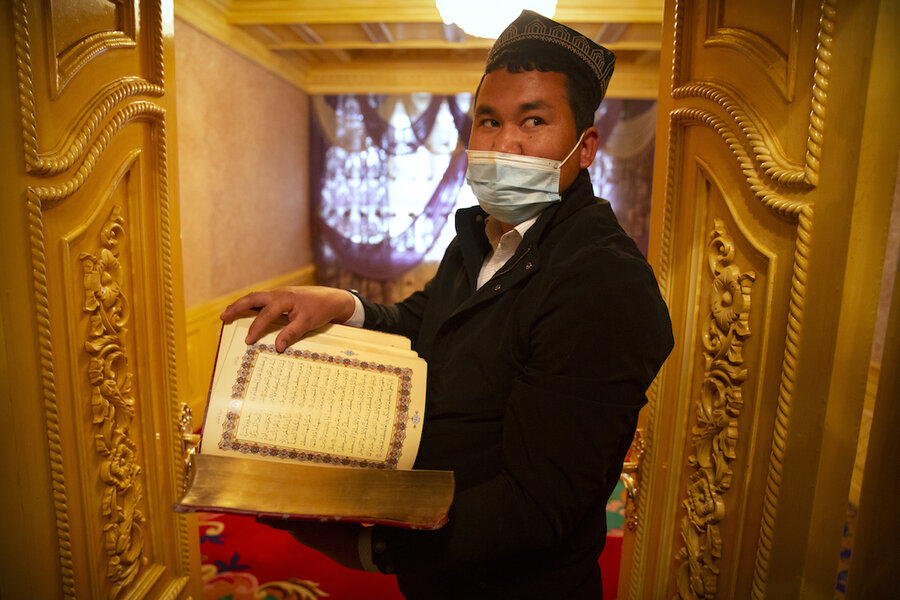 Tursunjan Mamat, a practicing Muslim and ethnic Uyghur in western China’s Xinjiang region, said he’s fasting for Ramadan but his daughters, ages 8 and 10, are not. Religious activity including fasting is not permitted for minors, he explained.

He wasn’t complaining, at least not to a group of foreign journalists brought to his home outside the city of Aksu by government officials, who listened in on his responses. It seemed he was giving a matter-of-fact description of how religion is practiced under rules set by China’s Communist Party.

“My children know who our holy creator is, but I don’t give them detailed religious knowledge,” he said, speaking through a translator. “After they reach 18, they can receive religious education according to their own will.”

Under the weight of official policies, the future of Islam appears precarious in Xinjiang, a rugged realm of craggy snow-capped mountains and barren deserts bordering Central Asia. Outside observers say scores of mosques have been demolished, a charge Beijing denies, and locals say the number of worshippers is sinking.

A decade ago, 4,000 to 5,000 people attended Friday prayers at the Id Kah Mosque in the historic Silk Road city of Kashgar. Now only 800 to 900 do, said the mosque’s imam, Mamat Juma. He attributed the drop to a natural shift in values, not government policy, saying the younger generation wants to spend more time working than praying.

The Chinese government organized a five-day visit to Xinjiang in April for about a dozen foreign correspondents, part of an intense propaganda campaign to counter allegations of abuse. Officials repeatedly urged journalists to recount what they saw, not what China calls the lies of critical Western politicians and media.

Beijing says it protects freedom of religion, and citizens can practice their faith so long as they adhere to laws and regulations. In practice, any religious activity must be done in line with restrictions evident at almost every stop in Xinjiang – from a primary school where the headmaster said fasting wasn’t observed because of the “separation of religion and education,” to a cotton yarn factory where workers are banned from praying on site, even in their dormitory rooms.

“Within the factory grounds, it’s prohibited. But they can go home, or they can go to the mosque to pray,” said Li Qiang, the general manager of Aksu Huafu Textiles Co. “Dormitories are for the workers to rest. We want them to rest well so that they can maintain their health.”

By law, people in China are allowed to follow Islam, Buddhism, Taoism, Roman Catholicism, or non-denominational Protestantism. In practice, there are limits. Workers are free to fast, the factory manager said, but they are required to take care of their bodies. If children fast, it’s not good for their growth, said the Id Kah mosque’s imam.

Researchers at the Australian Strategic Policy Institute, a think tank, said in a report last year that mosques have been torn down or damaged in what they called the deliberate erasure of Uyghur and Islamic culture. They identified 170 destroyed mosques through satellite imagery, about 30% of a sample they examined.

The Chinese government rejects ASPI research, which also has included reports on Beijing’s efforts to influence politics in Australia and other Western democracies, as lies promoted by “anti-China forces.”

The government denies destroying mosques and allegations of mass incarceration and forced labor that have strained China’s relations with Western governments. They say they have spent heavily on upgrading mosques, outfitting them with fans, flush toilets, computers, and air conditioners.

Uyghurs are Xinjiang’s biggest ethnic minority, a predominantly Muslim group who are 10 million of the region’s population of 25 million people. They have borne the brunt of a government crackdown that followed a series of riots, bombings, and knifings, although ethnic Kazakhs and others have been swept up as well.

The authorities obstruct independent reporting in the region, though such measures have recently eased somewhat. AP journalists visiting Xinjiang on their own in recent years have been followed by undercover officers, stopped, interrogated, and forced to delete photos or videos.

Id Kah Mosque, its pastel yellow facade overlooking a public square, is far from destroyed. Its imam toes the official line, and he spoke thankfully of the government largesse that has renovated the more than 500-year-old institution.

“There is no such thing as mosque demolition,” Mr. Juma said, other than some rundown mosques taken down for safety renovations. Kashgar has been largely spared mosque destruction, the Australian institute report said.

Mr. Juma added he was unaware of mosques being converted to other uses, although AP journalists saw one turned into a cafe and others padlocked shut during visits in 2018.

The tree-lined paths of the Id Kah Mosque’s grounds are tranquil, and it’s easy to miss the three surveillance cameras keeping watch over whoever comes in. The imam’s father and previous leader of the mosque was killed by extremists in 2014 for his pro-government stance.

About 50 people prayed before nightfall on a recent Monday evening, mostly elderly men. A Uyghur imam who fled China in 2012 called such scenes a staged show for visitors.

“They have a routine of making such a scene every time they need it,” said Ali Akbar Dumallah in a video interview from Turkey. “People know exactly what to do, how to lie, it’s not something new for them.”

Staged or not, it appears Islam is on the decline. The ban on religious education for minors means that the young aren’t gaining the knowledge they should, Mr. Dumallah said.

“The next generation will accept the Chinese mindset,” he said. “They’ll still be called Uyghurs, but their mindset and values will be gone.”

Officials say those who want to study Islam can do so after the age of 18 at a state-sponsored Islamic studies institute. At a newly-built campus on the outskirts of Urumqi, the capital of Xinjiang, hundreds train to become imams according to a government-authored curriculum, studying a textbook with sections like “Patriotism is a part of faith” and “be a Muslim who loves the motherland, abide by the national constitution, laws and regulations.”

“Continue the sinicization of Islam in our country,” the foreword reads. “Guide Islam to adapt to a socialist society.”

Though Islam lives on, the sinicization campaign has palpably reduced the role of religion in daily life.

Near Urumqi’s grand bazaar, several dozen elderly men trickled out of a mosque during an unannounced visit by an AP journalist. Prayers continue as usual, the imam said, though attendance has fallen considerably. A jumbo screen showing state media coverage of top Chinese leaders hung above the entrance.

Down the street, the exterior at the Great White Mosque had been shorn of the Muslim profession of faith. On a Wednesday evening at prayer time, the halls were nearly empty, and worshippers had to go through x-rays, metal detectors, and face-scanning cameras to enter.

“I really worry that the number of believers will decrease, but that shouldn’t be a reason to force them to pray here,” Mr. Juma said.

His mosque, which flies a Chinese national flag above its entrance, has been refurbished, but fewer and fewer people come.

Despite surveillance, Uyghurs around the world speak out online

Orchid Island became Taiwan’s tourist hotspot. Does it want to be?