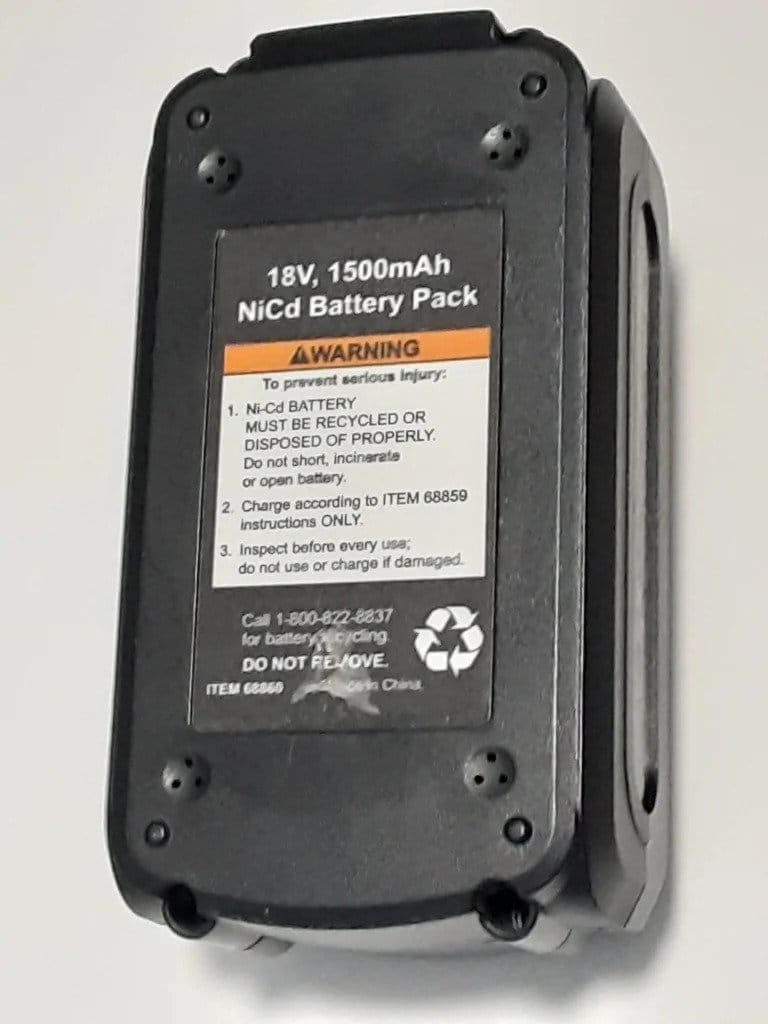 Some time ago, the battery on the master's circular saw failed. The saw was already an old model, and the manufacturer stopped producing spare batteries for this tool. The question arose whether to purchase a new saw or try to replace the nickel-cadmium batteries with lithium-ion ones.
Tools and materials: -Soldering iron; -Pot welding; -5 lithium-ion batteries 18650; -Nickel strip; -BMS board with cell balancing ; -Wire; -Chip resistor 51 kOhm; -Zener diode, 22V; -Kapton tape;
-MDF;
Step one: battery
First you need to carefully open the battery case. The rechargeable battery consists of 15 1500 mAh Ni-Cd cells. The nominal voltage of the nickel-cadmium cell is 1.2 V with a nominal operating voltage of 1.3 to 1 V. This provides a nominal battery voltage of 18 V (15 x 1.2 V) with an operating voltage range of 19.5 V to 15 V.
The lithium ion cell has a rated voltage of 3.7V and a rated operating voltage range of 4.2V to 3V. Five lithium-ion cells will provide an 18.5V battery with an operating range of 21 to 15V. A block of 5 series-connected lithium-ion cells will have approximately the same operating voltage range as a NiCd battery block. 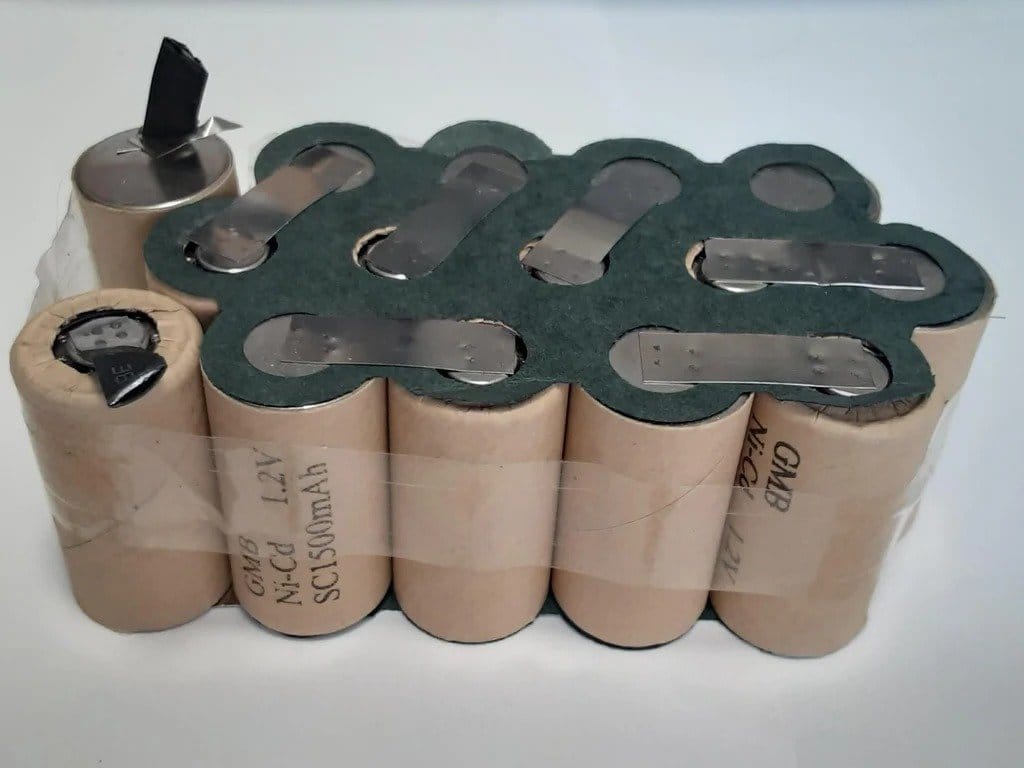 Five lithium-ion cells will fit freely in the case and there will be room for the charging board.
Step two: battery diagram
The battery has three contacts. Positive and negative terminal and charging terminal. The charging terminal has a thermal switch in series to shut off the charger if the battery overheats during charging. 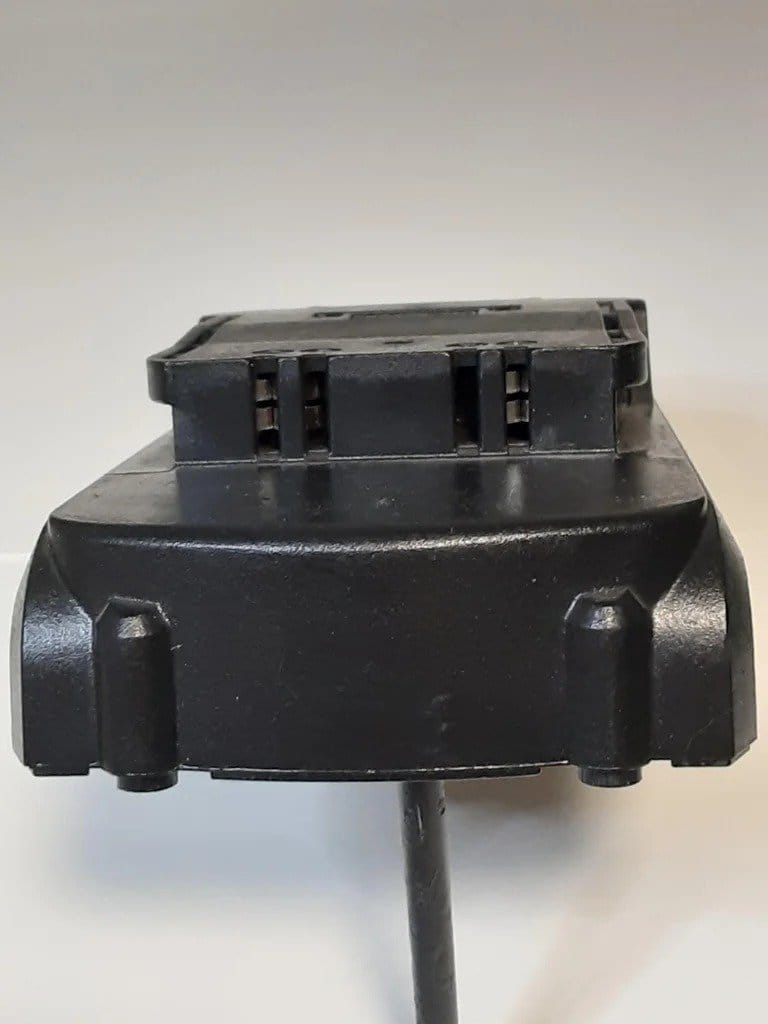 Step three: motor current
The factor to be considered in this operation is the starting current of the motor. The figure below shows the circuit for measuring the starting current and the operating current of the motor without load. The 5S 18650 unit shown was assembled from Sony-Fukushima US18659GR GP4 cells. These cells have a maximum continuous discharge current of only 4 A and are only used to measure the motor current. The measured current values ​​will be used to select the cells that have the maximum discharge current required for this engine.
The diagrams show graphs of battery voltage and current during engine start. Peak current (blue trace) is 31.06 A (1.62 V/0.049 ohms). During start-up, the battery voltage drops to 5V. The motor resistance is 0.102 ohm ((5.0-1.62) /33.06). Internal battery resistance is 0.151 ohms (5.0/33.06) or 0.03 ohms per cell.
The 31A peak current measurement is low due to the relatively high resistance of the 0.05 ohm current sensing resistor.
No-load motor current is about 3.1A. 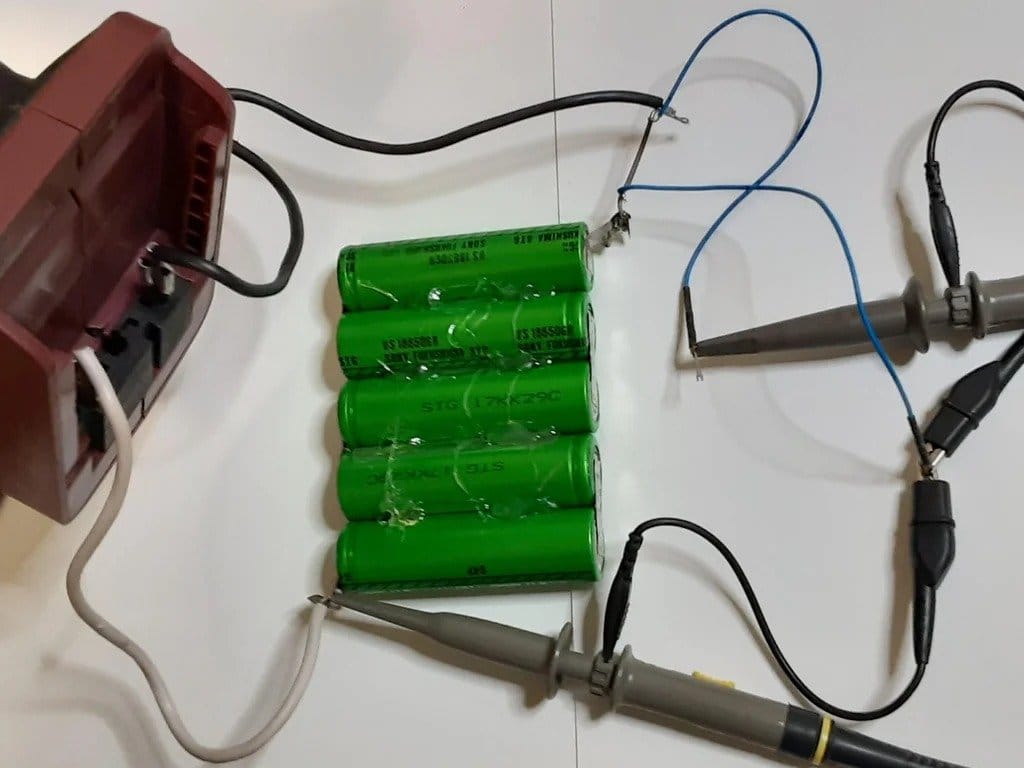 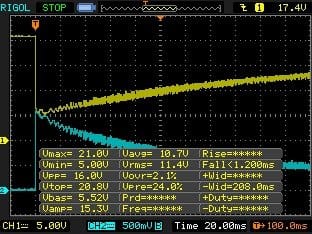 Step Four: Selecting Batteries
Lithium-ion cells for this project require a high continuous discharge current rating as well as a high current pulse specification. The current flowing through the motor will range from no-load current to blocking current. These types of cells are classified as power cells.
The Samsung INR18650-25R battery would have been the ideal battery for this project, but no such batteries were available at the time of the project.
Then the master decided to use Epoch 18650-3000P batteries. These are 3000 mAh cells designed for 15 A continuous current.
< img class = "aligncenter" alt = "Replacing nickel-cadmium cells with lithium-ion" src = "https://usamodelkina.ru/uploads/posts/2021-05/1620285422_1-16.jpg"/> The wizard put together a 5S package using Epoch cells. The cells are glued together with hot melt glue. The individual elements are connected using nickel strips 0.15 mm thick and 8 mm wide, spot-welded to the cell terminals.
Cells were charged at approximately 95% with approximately 4.08 V per cell, 20.4 V for five cells connected in series.
The peak current (blue curve in diagram # 3) is 100.4 A (2.46 V/0.0245 ohms). Cell voltage dropped to 12.8 V or 2.56 V per cell (diagram # 2). The operating current of the motor is about 3.3A (0.080V/0.0245Ω) (chart # 4).
These measurements indicate two problems with 5S Epoch cells. High inrush current and cell voltage drops below the discharge voltage threshold of the battery protection circuit (PCM). 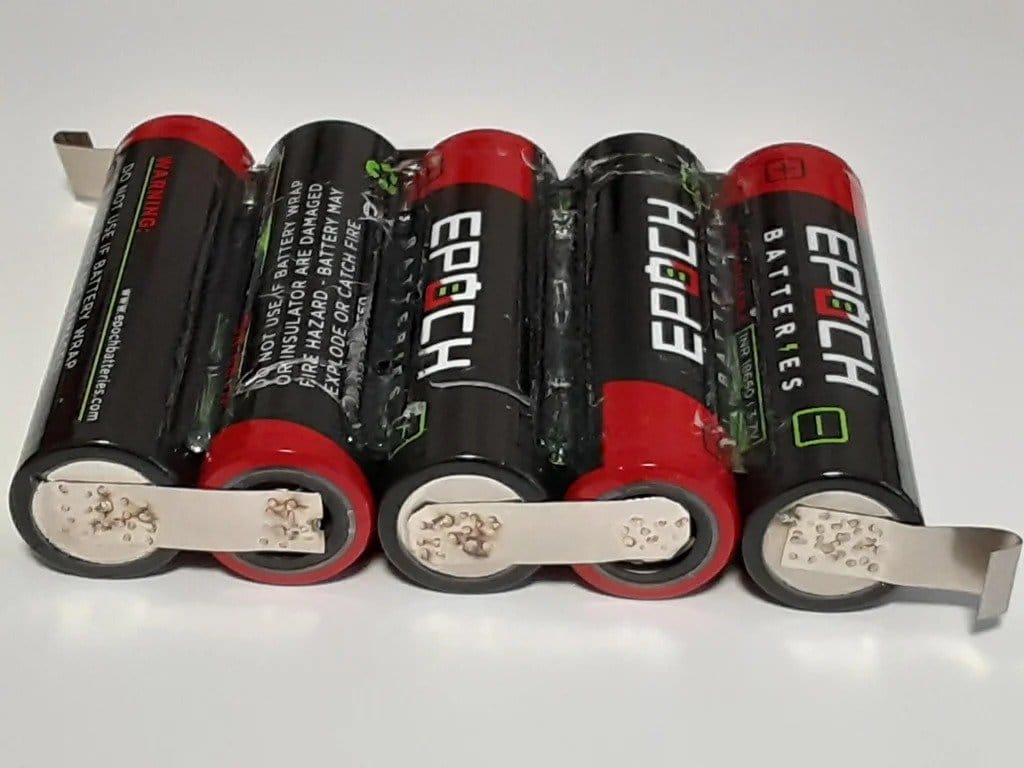 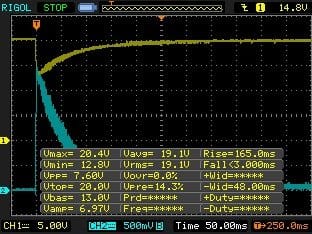 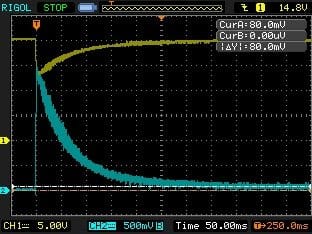 Step Five: Battery Protection Circuit (PCM)
The master used a PCM board with 50A short circuit current limitation to protect the cell. An additional feature is overcurrent protection with two delays to provide a high inrush current without activating the overcurrent trip function. 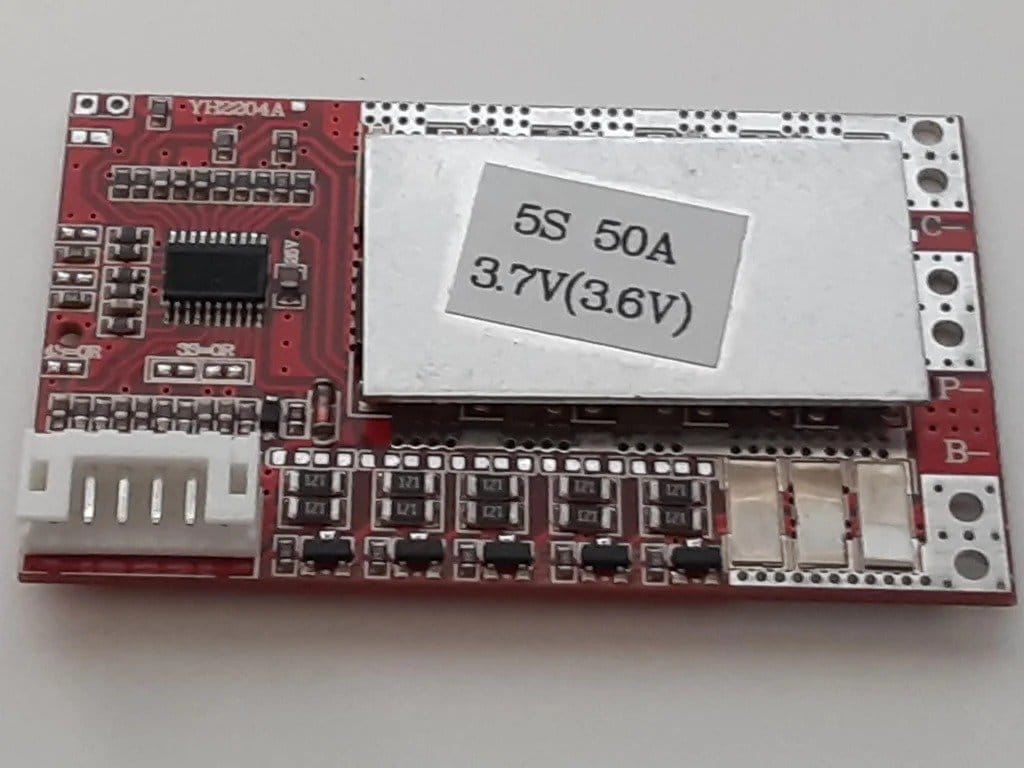 The photo below is a PCM diagram with a load connected. The following photo shows the terminal pad for setting the overload delay jumper. 0.001243 ohm resistors on the PCM are used to measure the current waveform.
The initial test was done with the overcurrent delay jumper open. The blue curve represents the current waveform and the overcurrent trip is activated after about 12ms with a peak current of about 105A (130mV/0.001243 ohms.).
The test was repeated with the current trip delay jumper in place. Battery voltage (yellow graph) and current (blue graph) measurements. The overcurrent trip delay is increased to about 120ms, allowing time for the motor current to fall below the 50A threshold. Multiple start-up and idle tests have shown reliable operation of the device. 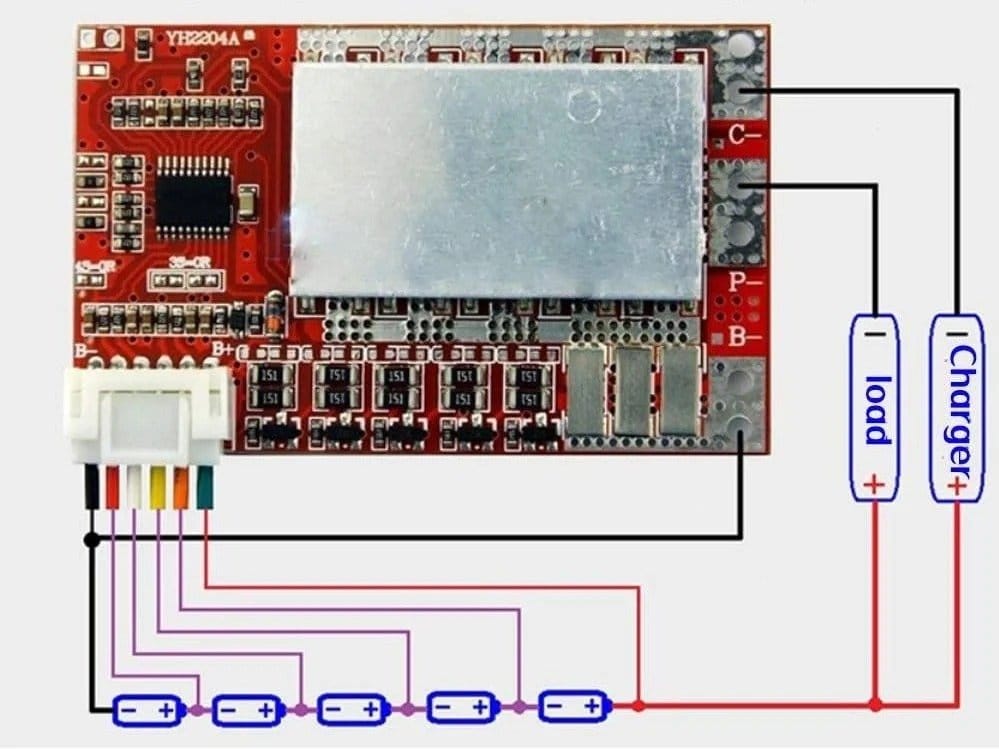 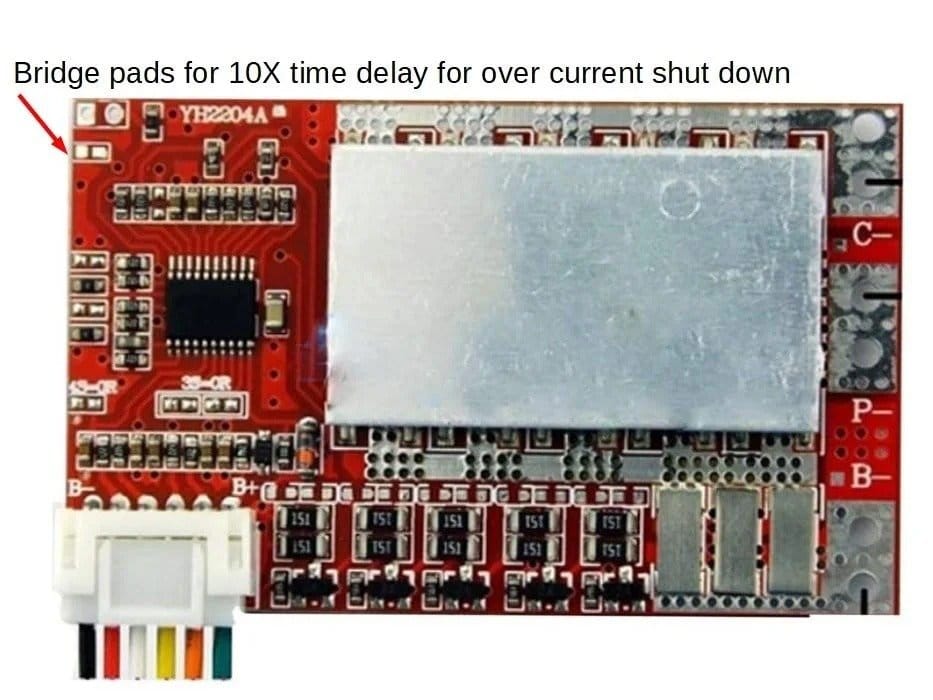 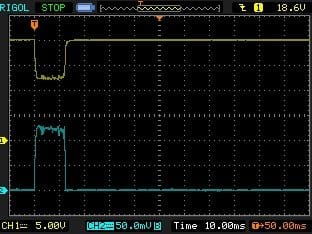 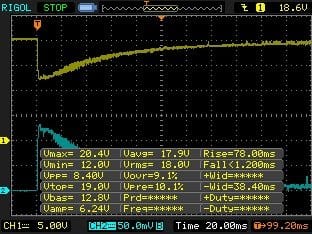 Step six: charger modifications
The charger that came with this battery is a DC charger. Measurement of the charger parameter showed that modification would be required. The charging current was measured at 1.31A over a battery voltage range of 15V to nearly 29V. The current should have cut off at about 18.75V (15 NiCd cells x 1.25V per cell). The second problem was that the open circuit voltage of the charger was around 41V, which is too much to charge this type of battery.
The following photos show the PCB of the charger and the diagram with the charger outlined with a dashed line.
The open circuit voltage was reduced to about 26V by replacing the ZD2 with a 22V Zener.
Battery voltage during charging is monitored by the AD6610 … Li-ion battery charging is complete when the voltage is approximately 21.25 V (4.25 V per cell). Resistor R71 has been replaced with 51K resistor. The photo shows the location of the resistor and zener diode.
After this revision, the wizard tested the charger and, after a successful test, assembled it.
< img class = "aligncenter" alt = "Replacing nickel-cadmium cells with lithium-ion" src = "https://usamodelkina.ru/uploads/posts/2021-05/1620285393_1-30.jpg"/> 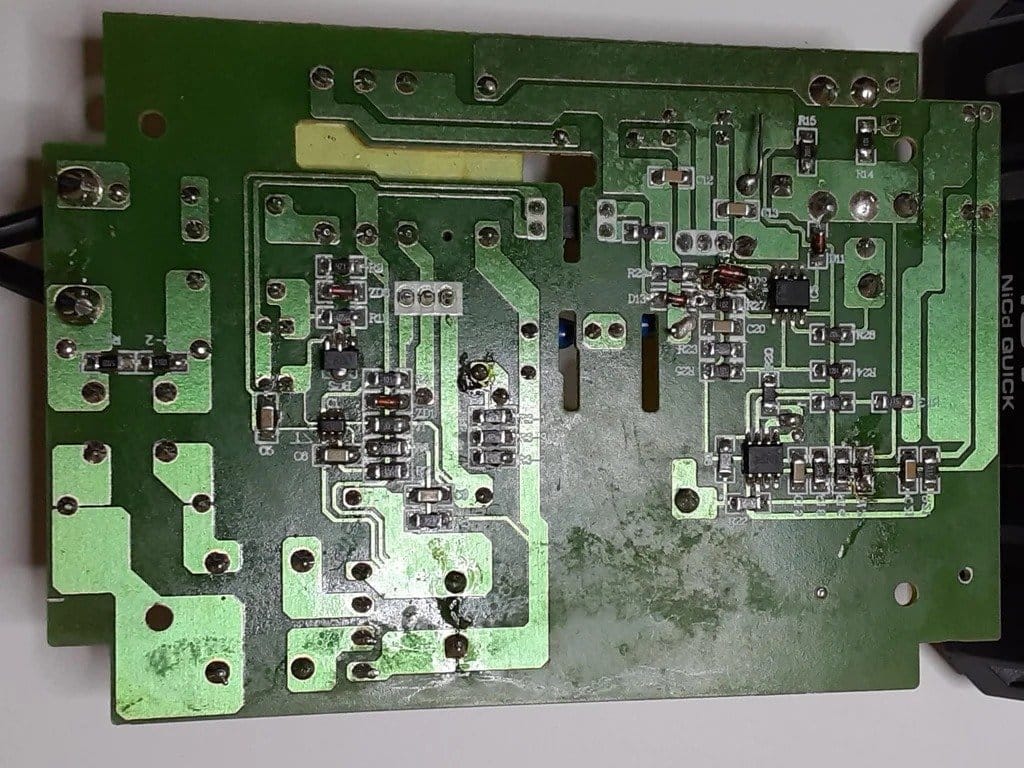 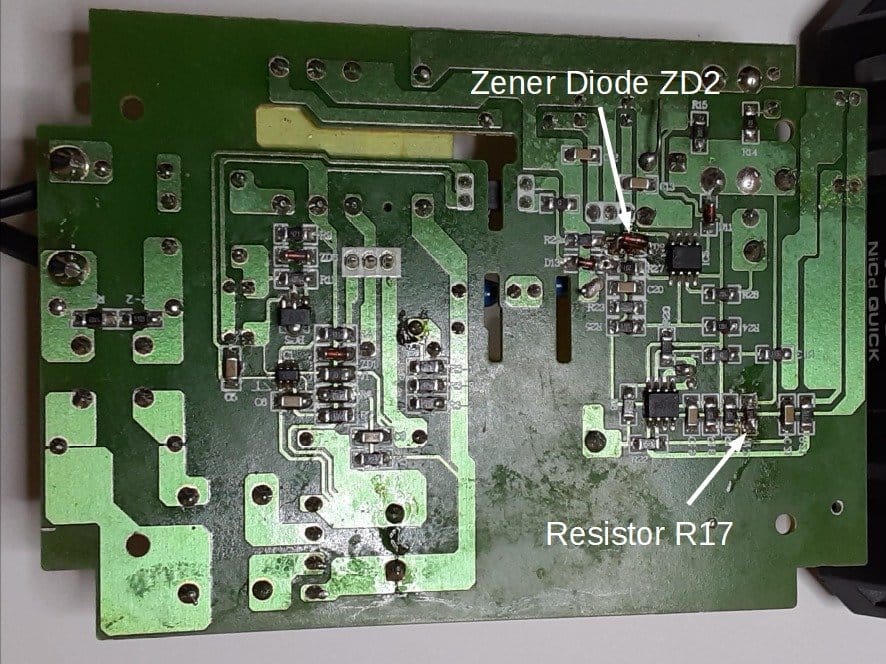 Step Seven: Assembling the Battery
After assembling the battery, the technician wrapped the batteries with Kapton tape. Then I cut a rectangle from MDF and tied it to batteries. MDF provides electrical and mechanical insulation for the PCM circuit board and battery. 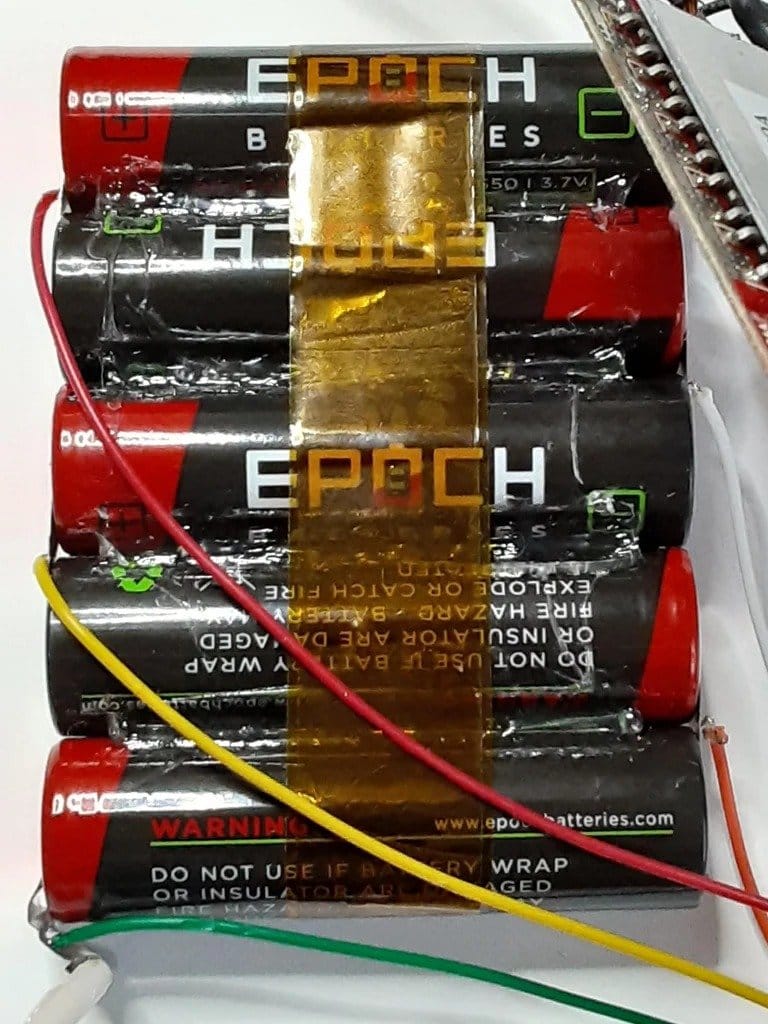 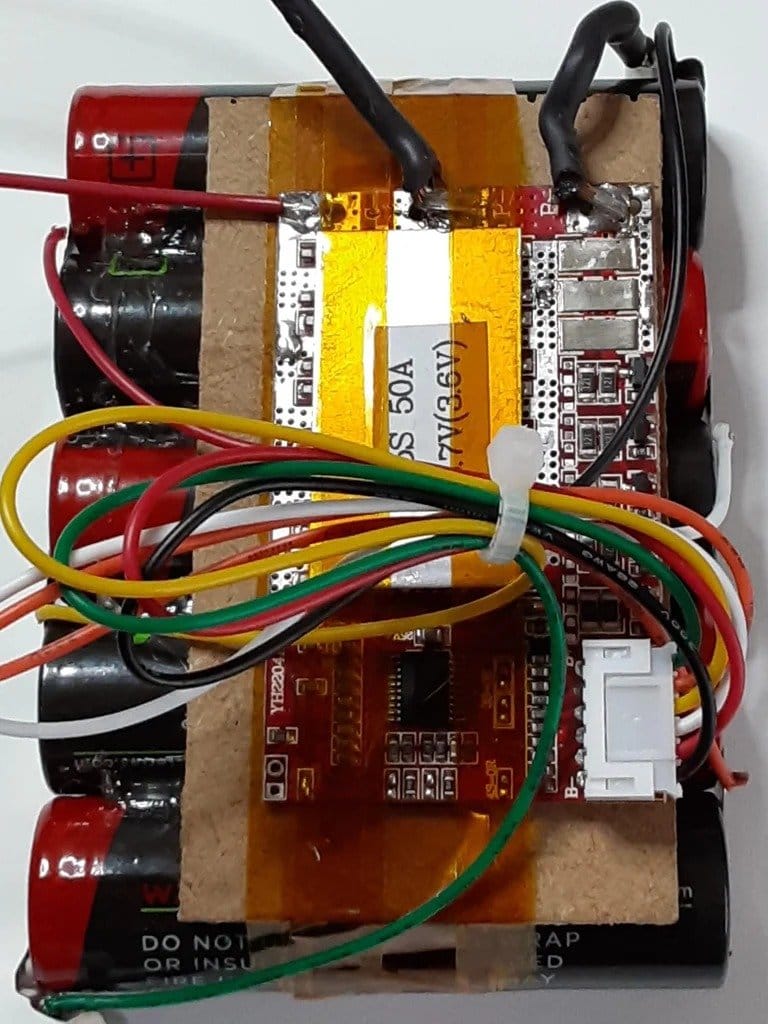 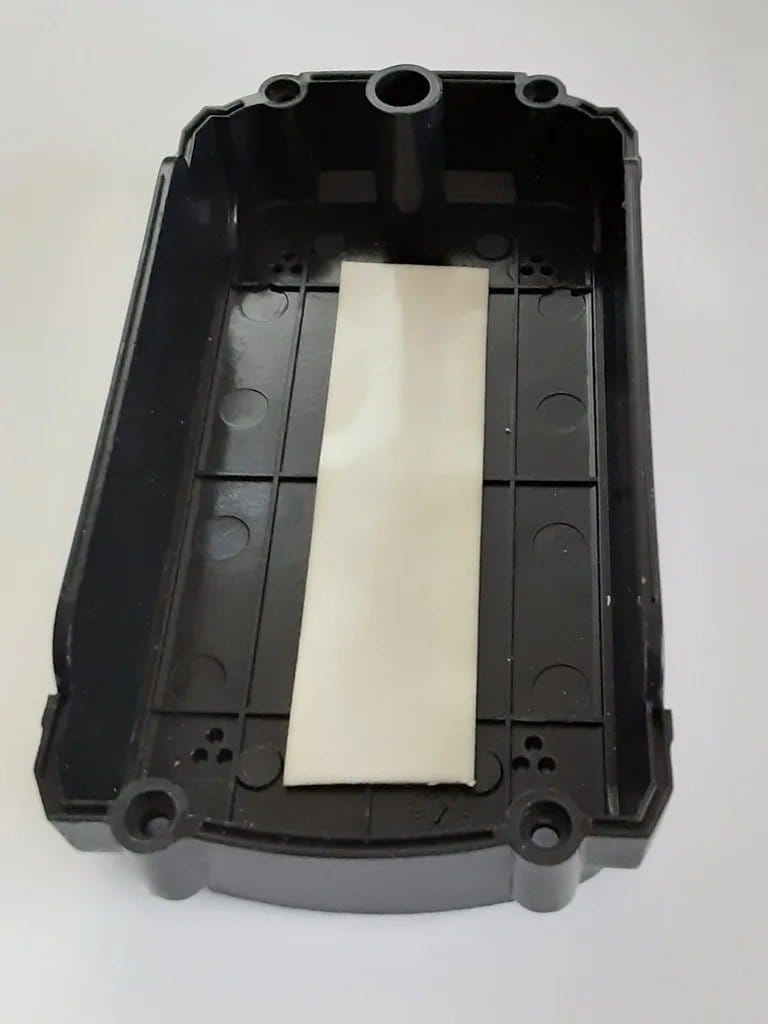 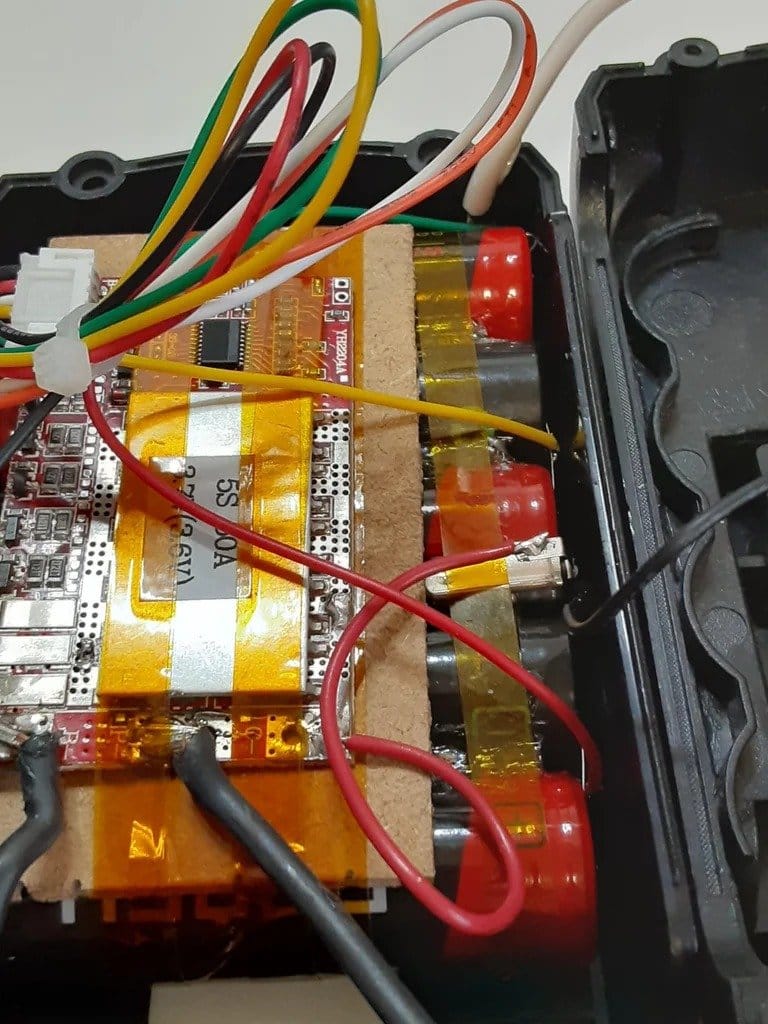 After assembly, you need to charge the battery. The battery voltage after charging was 20.95 V, or 4.19 V per cell.