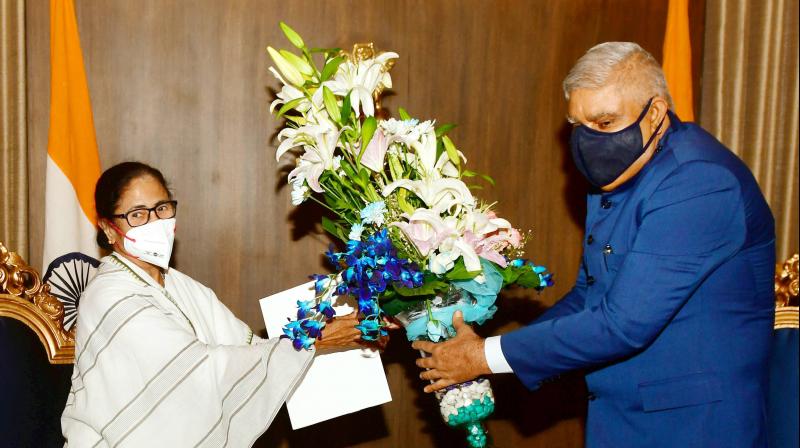 Kolkata: Trinamul Congress chief Mamata Banerjee, undeterred by her controversial defeat by a narrow margin to protege-turned-adversary Suvendu Adhikari of the BJP in Nandigram, is all set to take the oath as chief minister for the third consecutive time on the morning of Wednesday, May 5, after the TMC won a record two-thirds majority in the Assembly once again, with 213 MLAs, against 77 of the BJP, that will sit in Opposition.

This is, however, a rare instance in the history of the state when a two-time CM is on her way to take the oath to head a government despite losing in the Assembly polls as her party was elected by a landslide. On Monday evening, Ms Banerjee met governor Jagdeep Dhankhar at Raj Bhavan and pledged to form her government after she was unanimously chosen as the TMC’s legislature party leader.

Mr Dhankhar tweeted: “Hon’ble CM @MamataOfficial called on me and submitted her resignation as CM and the same has been accepted. She has been requested to continue till alternative arrangements are made. Congratulations @MamataOfficial for victory in the Assembly polls and wished her a fruitful third term in office to serve the people of the state with dedication and commitment so that state regains past glory.”

He added: “Taking note of communication @AITCofficial electing @MamataOfficial as leader of 17th WB Legislative Assembly have invited her to take oath of office of chief minister on May 5 at 10.45 am at Raj Bhavan. In view of current Covid situation, function will be with limited audience.”

A day after Ms Banerjee’s oath-taking, all the newly-elected TMC MLAs will be sworn in by Biman Banerjee, who has been selected as pro-tem speaker, before he assumes the office of Speaker, said party secretary-general Partha Chatterjee. He added that the CM would decide on the Cabinet’s portfolio allocations later.

Asked about the seat the TMC chief would contest from to enter the West Bengal Assembly, following her defeat, Mr Chatterjee said: “The matter is pending before the Election Commission. Ms Banerjee will be the CM as per the Constitution.” Mr Mukherjee pointed out that Ms Banerjee can stay as CM after contesting and winning a seat within the next six months.

Once again alleging foul play in Nandigram, the TMC supremo referred to an SMS sent by the returning officer in which he apparently said he feared for his life if he had ordered a recount of the votes. “I have no other option but to commit suicide,” the RO reportedly wrote in the SMS to one of his family members on Sunday night.

“The RO had found his life under threat in case recounting would have happened. The server was deliberately slowed down, machines were changed and power was cut. He worked under gunpoint. Why didn’t the EC order recounting of votes? The result was announced by the EC. All journalists got the news of my victory. The governor called me. But suddenly everything changed. I have never seen such a big mafiosi. We will go to court,” she claimed at her residence in Kalighat.

Ms Banerjee added: “VVPATs, postal ballots and EVMs will be kept separately in custody to avoid tampering. If tampering has happened, forensic tests would be conducted.”

Good Samaritan jumps off bridge to save child, but wants to stay anonymous

The telling seeds of the 2024 Republican primary